For the last several months, BUILD has been hard at work on the Cowen Park building, which is a tidy, locally-owned property at the north end of Seattle’s University District, and across the street from Cowen Park in the Ravenna neighborhood. The new building program comprises 30 apartment units, which range in size, and a commercial space that will house a café or small restaurant. The project also includes necessary amenities, such as a residential entry lobby, a mail & package room, residential and commercial garbage and recycling, a utility room, and bicycle parking. It’s an important development because it will add a diversity of functions to the already thriving neighborhood, and will bolster its position as the cornerstone of the park. It’s also a clever building because it uses a complicated and discordant series of land-use codes to create a congruent and elegant architecture. 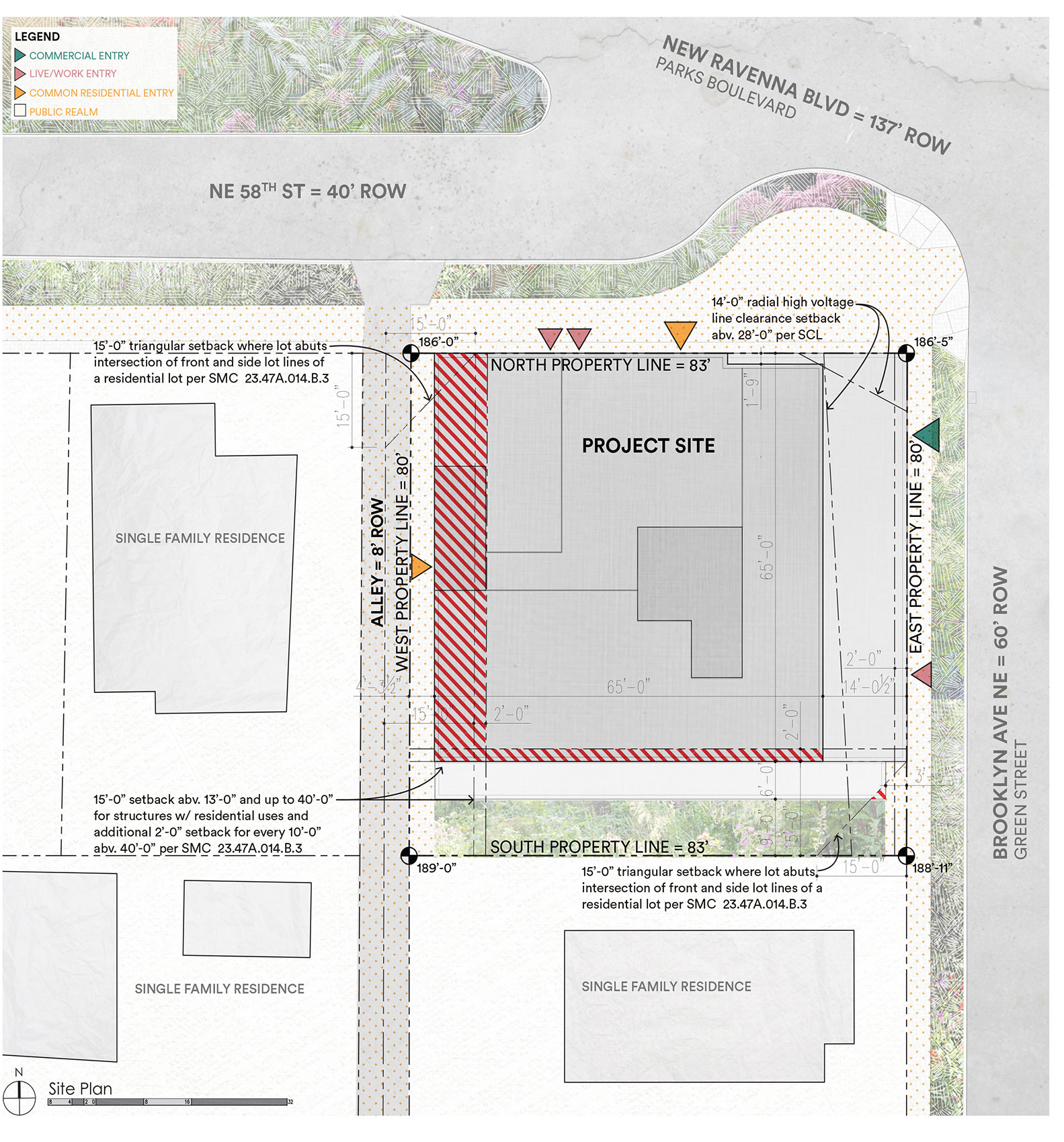 Today’s post is a cursory review of the primary land use codes pushing and pulling at the building’s form. These requirements could have easily altered a clear architectural idea into a muddled mess, but by thoughtfully strategizing around each of the code hurdles, BUILD’s design team was able to overcome the challenges and turn limitations into design opportunities. A great deal of analysis, code study, and a desk full of sketches are required to wrestle with a site like this, and while BUILD tested hundreds of unique ideas, it’s the following four conditions that led to a functional and balanced design.

SOUTH SETBACK
Multi-family buildings constructed adjacent to single-family zones require a mandatory setback to allow the neighboring house some breathing room—and rightly so. The south building façade shifts north to accommodate this buffer, which increases with the height of the structure. In order to make use of this setback, terraces are included with the 2nd level residential units over the commercial spaces.

EAST SETBACKS
At the ground level, a 2-foot right-of-way setback is required to accommodate additional sidewalk space; in order to best take advantage of the wider path, the restaurant/café area was positioned at the east elevation. Moving up the building, a high-voltage power line running along Brooklyn necessitated a 14-foot radius setback of the building, and because this only affects the upper residential floors, the positioning of these levels further defines the restaurant/café space below. This setback also allows for the inclusion of a residential terrace above the commercial level (outside of the power line setback).

WEST SETBACK
The recommended setback here would have taken a chunk out of the building so significant that it would have made the internal program infeasible. With the mounting costs of permitting, City utilities, and construction, small buildings like this survive by a razor thin margin. Maintaining a consistent edge along the west elevation was critical, and the design team offered a series of architectural enhancements to gain a departure for the upper-level setback. These included the addition of a green wall along the alley; a recessed notch running vertically up the building to provide additional articulation; locating the windows in such a way to maintain privacy for the single-family residence to the west; and moving the taller stair core away from the façade, thereby reducing the perceived height of this elevation. 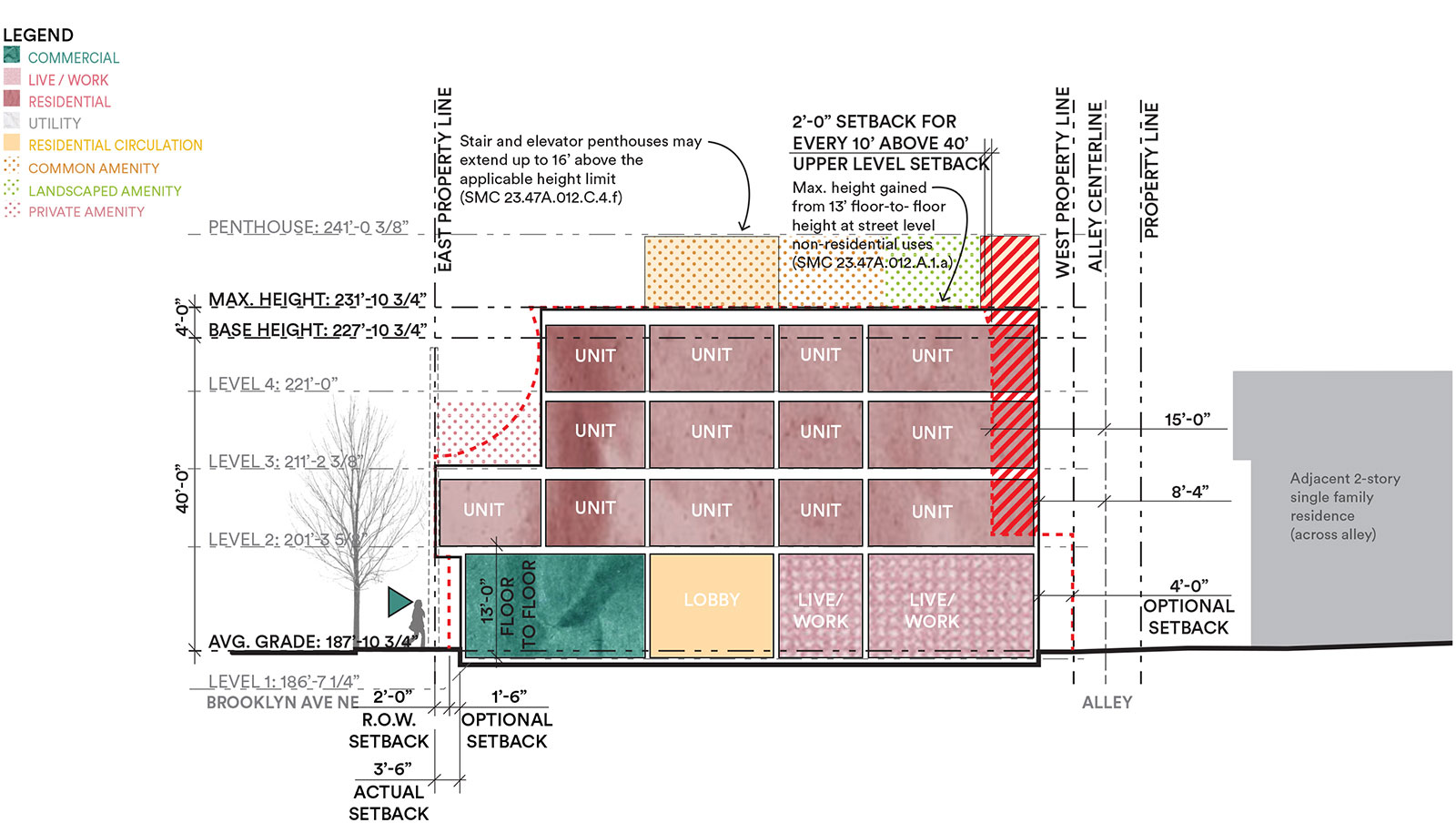 NORTH SETBACK
Perhaps most instrumental to the building’s aesthetic, is a required setback for an additional high-voltage power line at the north-east corner; this particular power line clips the site at a diagonal, and requires a setback from the north and east property lines. As a response to this requirement, the north-east corner of the building design follows the angle of the setback (and power line), which repeats across the north façade at each dwelling unit, resulting in a sawtooth pattern. This design detail was driven by site conditions, and it beautifully orients each unit toward the park. The design brings the ground level in further, which accentuates the sawtooth and provides additional landscaping at the ground-floor live-work units.

This handful of strategic design moves neatly separates the building into two primary volumes: ground floor commercial and a residential volume above. BUILD’s responses to the land-use code requirements shift the ground floor commercial to the south-east, and the upper floor residential volume to the north-west. This is a precarious juxtaposition, structurally and visually, and the overall massing relies on the careful assembly of cladding and fenestration to establish a deliberate relationship between the two volumes. 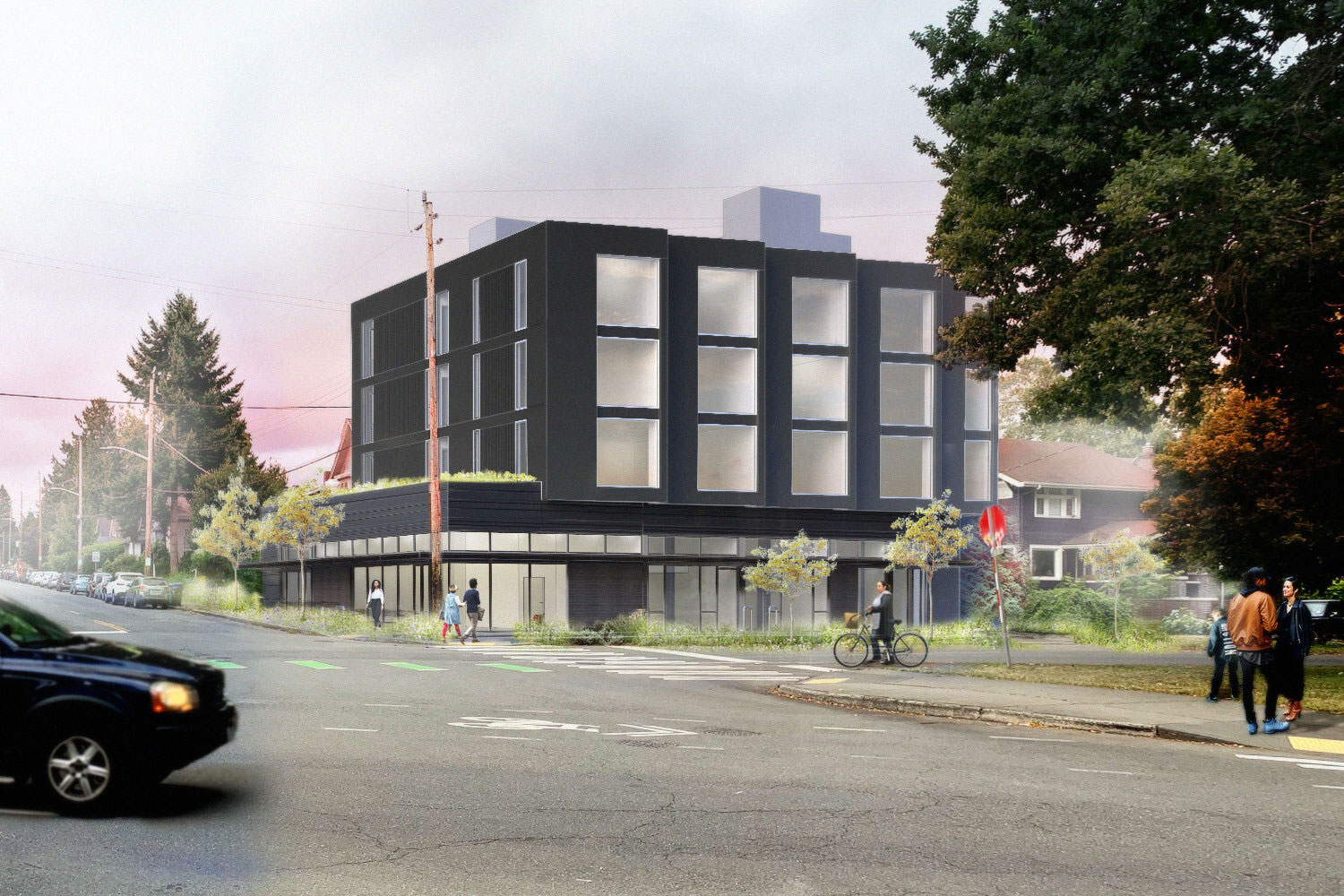 Working through additive and contradictory land use codes is a tricky exercise for an architecture team—and to be sure, in this case a less careful understanding of, and response to the parameters would have produced an unsightly wedding cake effect, with floors stepping back in awkward chunks. Not only would this fragment an important urban edge, but it would lead to a dysfunctional building with a challenging proforma.

By meticulously considering each land-use challenge, and working through the myriad limitations, BUILD navigated a seemingly chaotic land-use code, and achieved a design that meets all requirements and establishes an iconic form in an important location. These broad-stroke moves are a precursor to a series of intricate design details, so stay tuned for more coverage on the Cowen Park building.