Home 2015 October Affordability and Livability is in Our Hands

Affordability and Livability is in Our Hands

Urban growth is a contentious subject in most U.S. cities since the recovery from the economic recession. Here in Seattle, the issue has reached its boiling point. The housing inventory in Seattle is extremely limited, construction costs to build new housing are high, and the overwhelming competition for housing has reached desperate levels. All the while, equality and cultural diversity continue to diminish. In a statement from Seattle’s Mayor Ed Murray:

“We are facing our worst housing affordability crisis in decades. My vision is a city where people who work in Seattle can afford to live here. Housing affordability is just one building block to a more equitable city. It goes hand in hand with our efforts on raising the minimum wage, providing preschool education for low-income children, and increasing access to parks and transit. We all share a responsibility in making Seattle affordable. Together, this [HALA] plan will take us there.”

These are insightful words from a leader who’s done the legwork. In 2014, Mayor Murray and the Seattle City Council launched a 28-person team comprised of Seattle’s brightest and most forward-thinking professionals to study the affordability and livability of the city. The team included experts from various disciplines including planners, lawyers, developers, architects, non-profits, community leaders, and many more. In a truly wise move, the roster of the advisory committee brought together folks who do not regularly convene amicably to work together to balance all of their interests and find common ground. After a year’s worth of analysis and deliberation, this past summer the Housing Affordability and Livability Agenda (HALA) was released – a “bold agenda for increasing the affordability and availability of housing.”

[Photo via The City of Seattle]

While the 65-point report covers many aspects of affordability and livability in Seattle, we plan to take them in bite size pieces over the months ahead. The point we’ve focused on for today’s post concerns the proposal impacting the low-density single family residence (SFR) zones, and the report goes straight for the jugular. The City of Seattle’s current zoning establishes 65% of all buildable land(!) – everything except roads and open spaces – as SFR. From the HALA report:

“As Seattle expands rapidly and experiences massive economic and population growth, we are confronted by the reality of more people chasing a limited supply of housing than ever before in our history. This, combined with a booming regional housing market, fewer and fewer federal and state funds dedicated to subsidized housing, and widening income inequalities locally, nationally and globally, have created – and will likely sustain – a housing affordability crisis unlike any Seattle has experienced since the Second World War. At the same time, we are constrained by outdated policies and historical precedents that are no longer viable for the long-term health of our city. Some of the challenges are intrinsic to Seattle, for example tight limits on housing supply epitomized by the fact that at present almost two-thirds of our urban land is restricted to Single Family zoning.”

When it comes to the solutions, HALA doesn’t disappoint. The agenda unapologetically spells out what Seattle needs to do to get through its growing pains:

“While funds for affordable housing are key, we also need to relieve market pressures by increasing housing of all types. The inescapable reality is that everyone in the city of Seattle needs to make room both for newcomers, as well as those that historically have been excluded from the housing market altogether, including individuals and families who are homeless. We all have to make room at the tables of our many communities. In a land-constrained city, increased housing density is the necessary companion to urban growth. That means more cottages, in-law apartments, flats, duplexes and triplexes in the two-thirds of Seattle currently zoned exclusively (and, historically, through racial restrictive covenants, for purposes of exclusion) for single family homes. It means dedicating more land for multifamily housing in and around Urban Villages and more multifamily housing of all types and sizes inside Urban Villages or very close to desirable urban amenities. An increasingly dense city also must have access to an efficient transportation system, one that gets people out of their cars and using public options to move to and from work, school, and community activities.”

Getting down to specifics, the agenda proposes converting SFR zoned land within Urban Villages to more intensive uses, removing specific code barriers that make it difficult to build accessory dwelling units, and allowing more variety of housing types such as small lot dwellings, cottages, courtyard housing, duplexes and triplexes in single family zones. The agenda clearly declares that the current state of Single Family Zoning is no longer realistic nor sustainable. 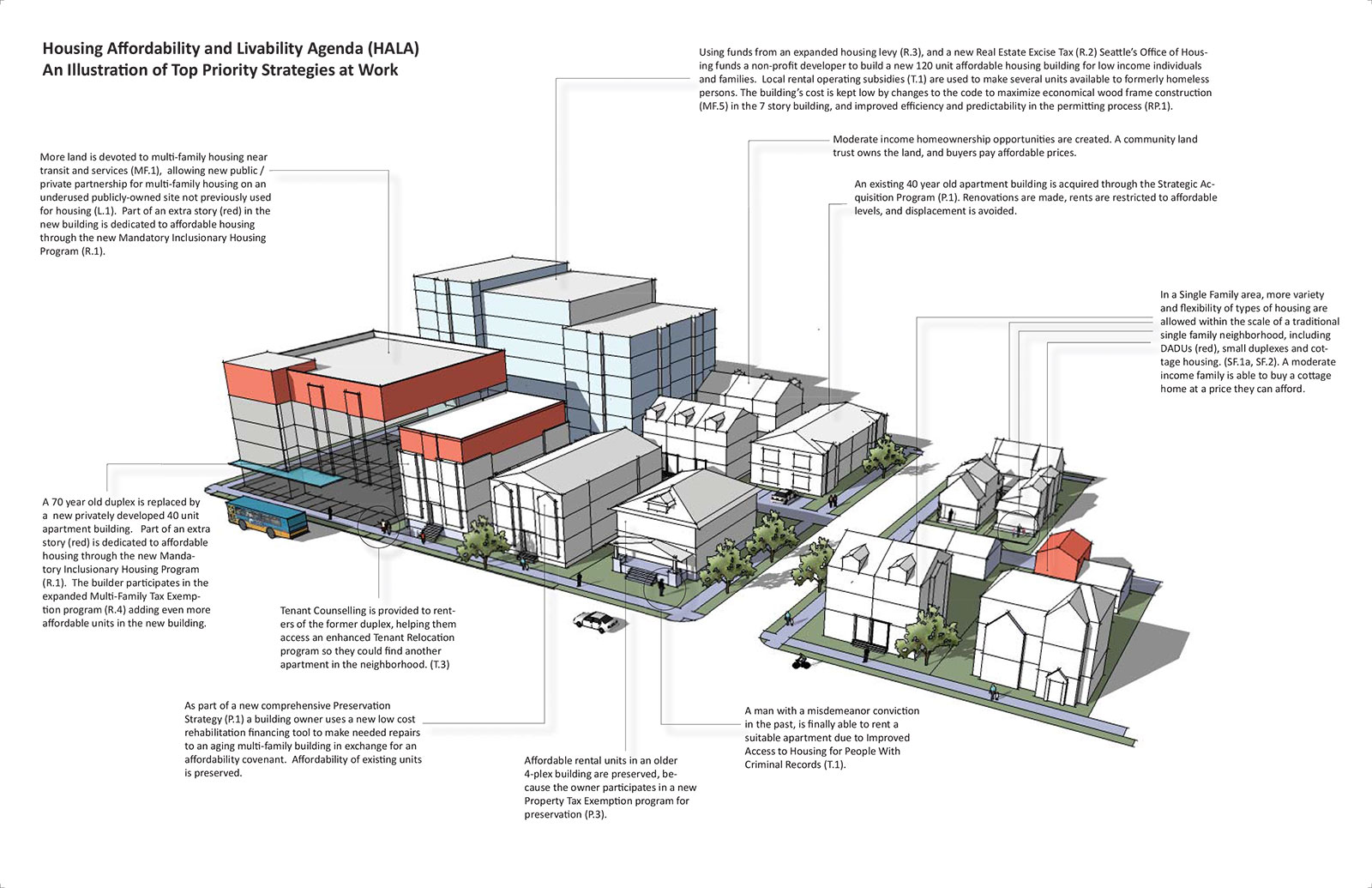 [Image via The City of Seattle]

For Seattle’s design-conscious urbanites, HALA was the voice of reason and a clear pathway to a city that fires on all cylinders. It was what many of us believed to be the solution for years, and having a report from the city’s experts, grounded in empirical data, gave credence to density and healthy urban growth. It provided an attainable opportunity for affordability and livability while fostering diversity. It was the answer.

Until it wasn’t.
Just two and a half weeks after its release, the mayor backed down, stating:

“The Council and I created the HALA process because our city is facing a housing affordability crisis. In the weeks since the HALA recommendations were released, sensationalized reporting by a few media outlets has created a significant distraction and derailed the conversation that we need to have on affordability and equity.”

The changes to the single family zones can be viewed as one of the more controversial of the 65 strategies outlined in HALA, but they were also some of the most important. We could pick apart the arguments for days: decipher the media coverage, sort out the agendas of city council members, and point fingers. We could defend Mayor Murray’s sacrifice of the single family provisions to gain ground on other HALA agenda items. But none of that gets us to a more affordable and livable city. As a team of architects, builders, occasional developers, and individuals who live and work in the city, three things are crystal clear to us:

1. We have a solid agenda from the experts based on exhaustive research.
2. We cannot rely on policy to move this agenda forward; media and politics are both self-defeating.
3. The solutions are in our own hands as citizens concerned with our city; we must advocate for implementing well-founded, expert solutions or we will simply fail in creating urban, balanced housing options (read: San Francisco).

The accessibility of HALA makes it easy for anyone to educate themselves on the recommendations for affordability and livability of urban housing. The report comes to clear conclusions that architects can advocate, developers can sponsor, homeowners can embrace, and builders can implement. There are several solutions that the citizens of Seattle (and other cities) have the ability to forward without the consensus of the jurisdictions. Simply put, we don’t necessarily need the city (government) to get its act together to make the city (community) more affordable and livable.

BUILD has been experimenting with some of these ideas in our Case Study House Series and multi-family projects. Each of the four examples below explores affordability and livability in slightly different ways, as well as incrementally introducing new ways to achieve density in the city. While these methods are in-line with HALA, three of the four were put into place before the HALA report was released.

Case Study House 2012
This single family residence in the Wedgwood neighborhood of Seattle was developed on a parcel created from the backyard of an existing residence. The Seattle Municipal Code allows parcels of a certain size to subdivide, permitting more single family housing inside the city. While the lots created from these subdivisions are often challenged with area limitations, easement requirements, and environmental critical areas, establishing a new house on them is possible for a homeowner willing to put in the work or able to hire a capable architect. The CSH 2012 was built before the real-estate boom started, but finding an empty parcel of land was still challenging. While finding an empty parcel today is nearly impossible in Seattle, there are plenty of opportunities to subdivide existing single family residential lots and offer additional opportunities for single family residences. Best of all, this solution is entirely at the discretion of home owners. 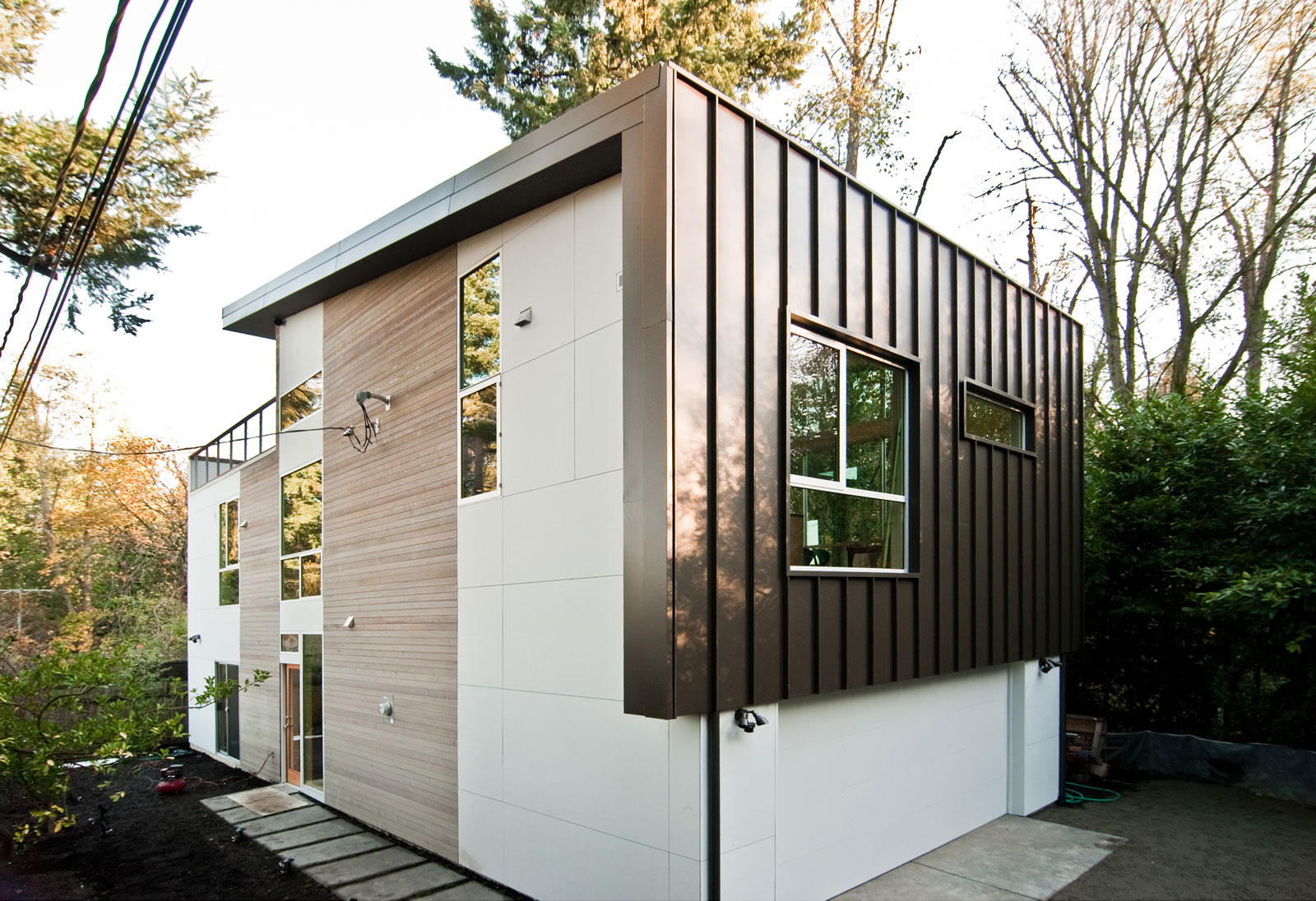 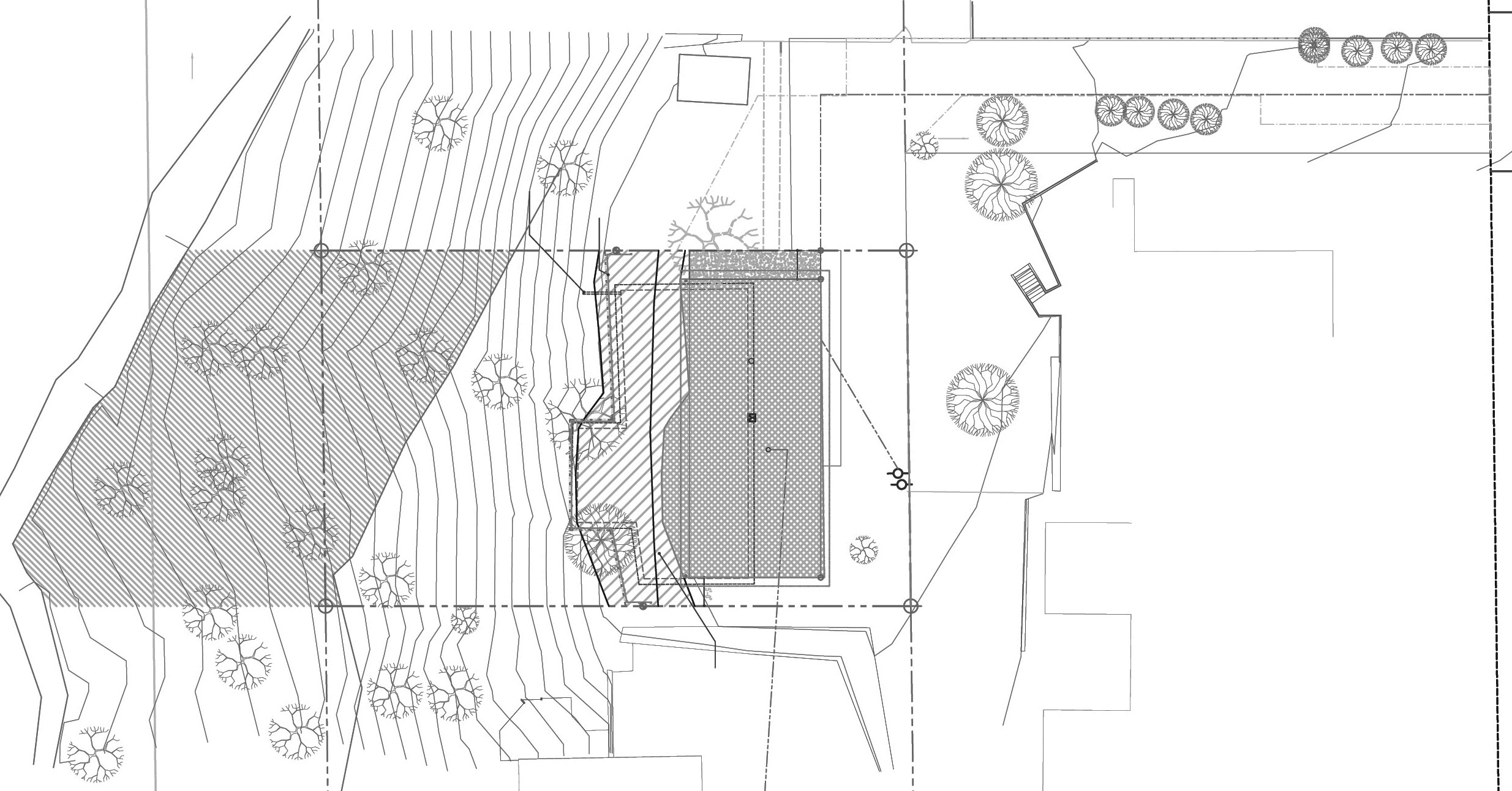 Case Study House 2014
Our recently completed home in the Roosevelt neighborhood of Seattle includes a single family residence with provisions for a future Accessory Dwelling Unit (ADU) at the lower level. A 480 square foot flex space was built with a full bathroom and the rough-ins for a future kitchen. While the space currently serves as a recreation room for a couple of active teenagers, in the years to follow, it can easily be converted to a living unit with the addition of walls and a small kitchen. While the ADU must be registered with the building department, the City of Seattle allows one Accessory Dwelling Unit or Detached Accessory Dwelling per parcel in addition to the primary residence so long as the requirements are met. 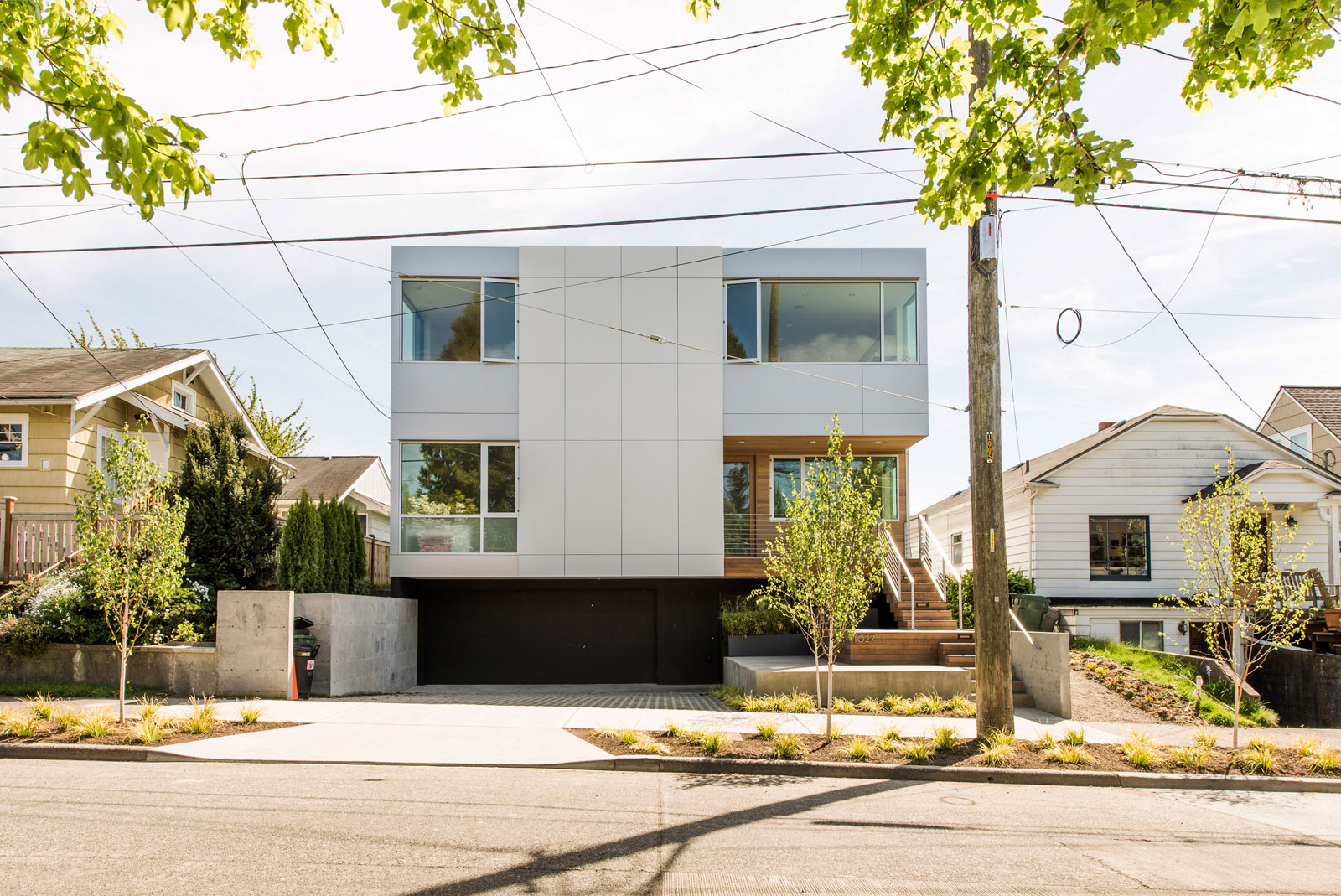 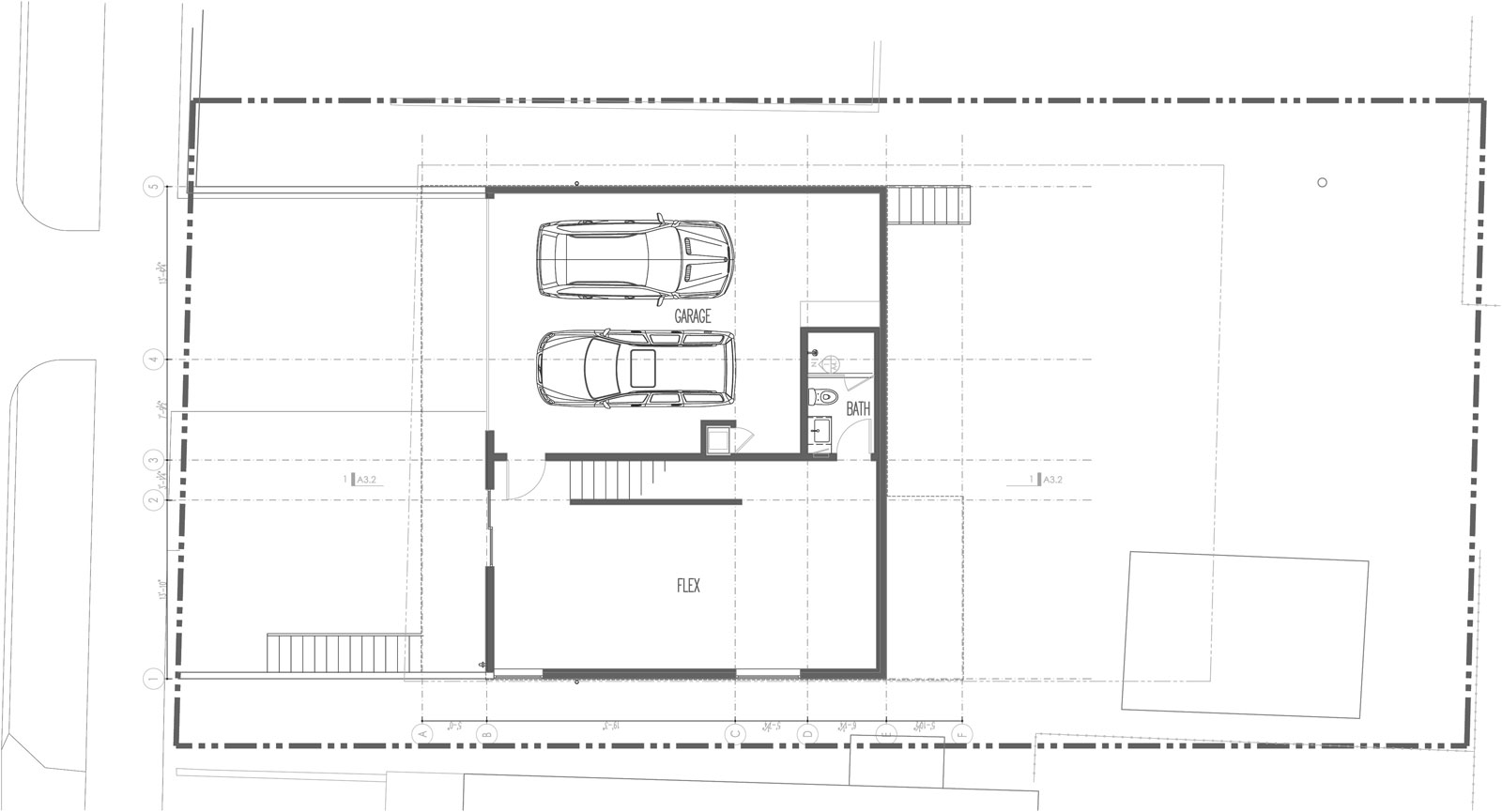 Case Study House 2016
BUILD is currently in for permit on the CSH 2016, which includes a fully outfitted ADU at the lower level. This mother-in-law unit will be established with the building permit for the primary residence and will be completed at the same time as the overall structure. The dwelling unit is approximately 650 square feet and includes all the amenities of an apartment unit in the city. Whether the city council can follow through with the HALA agenda or not, many homeowners have it within their right to include an accessory dwelling unit on their property. 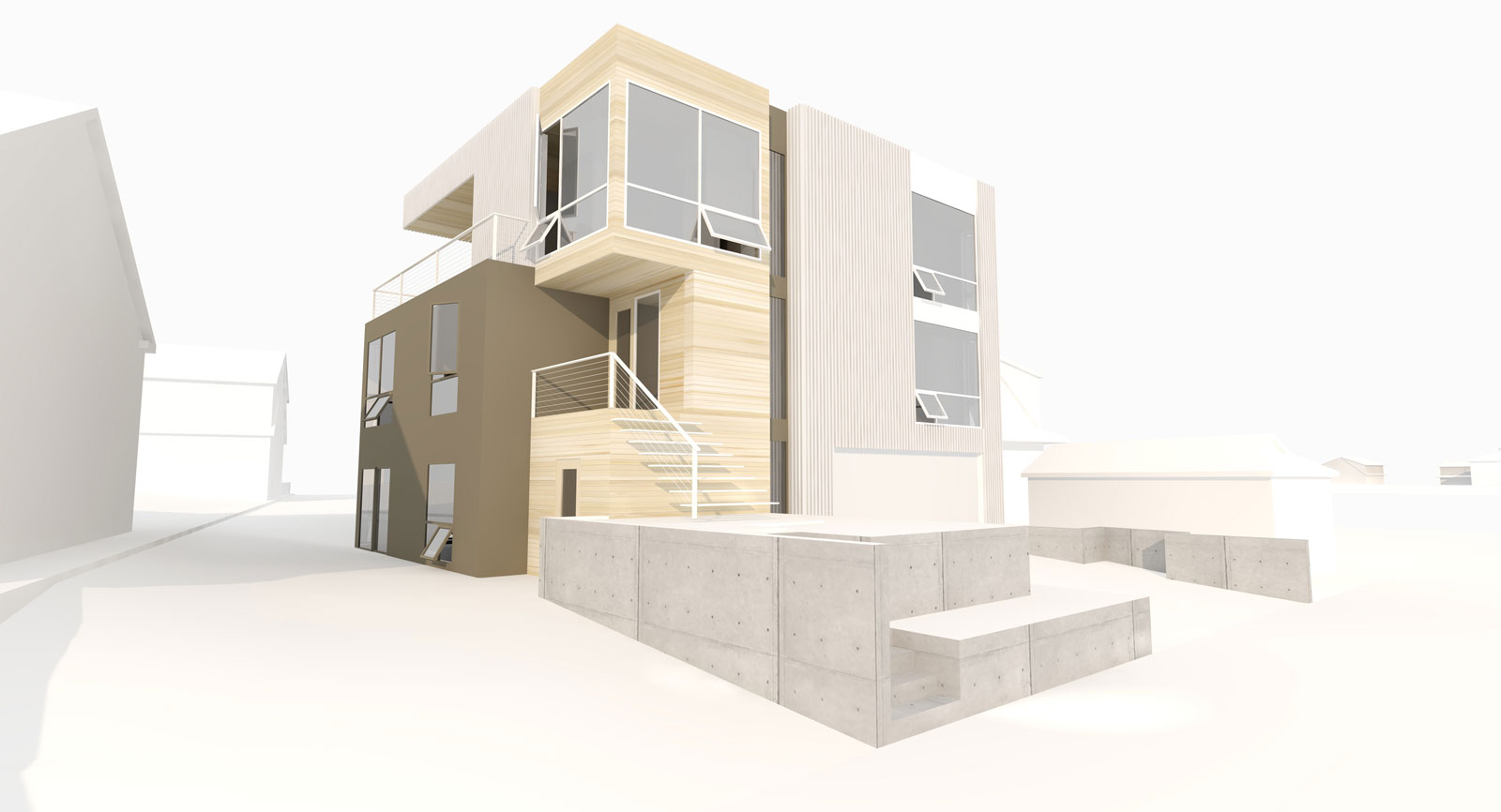 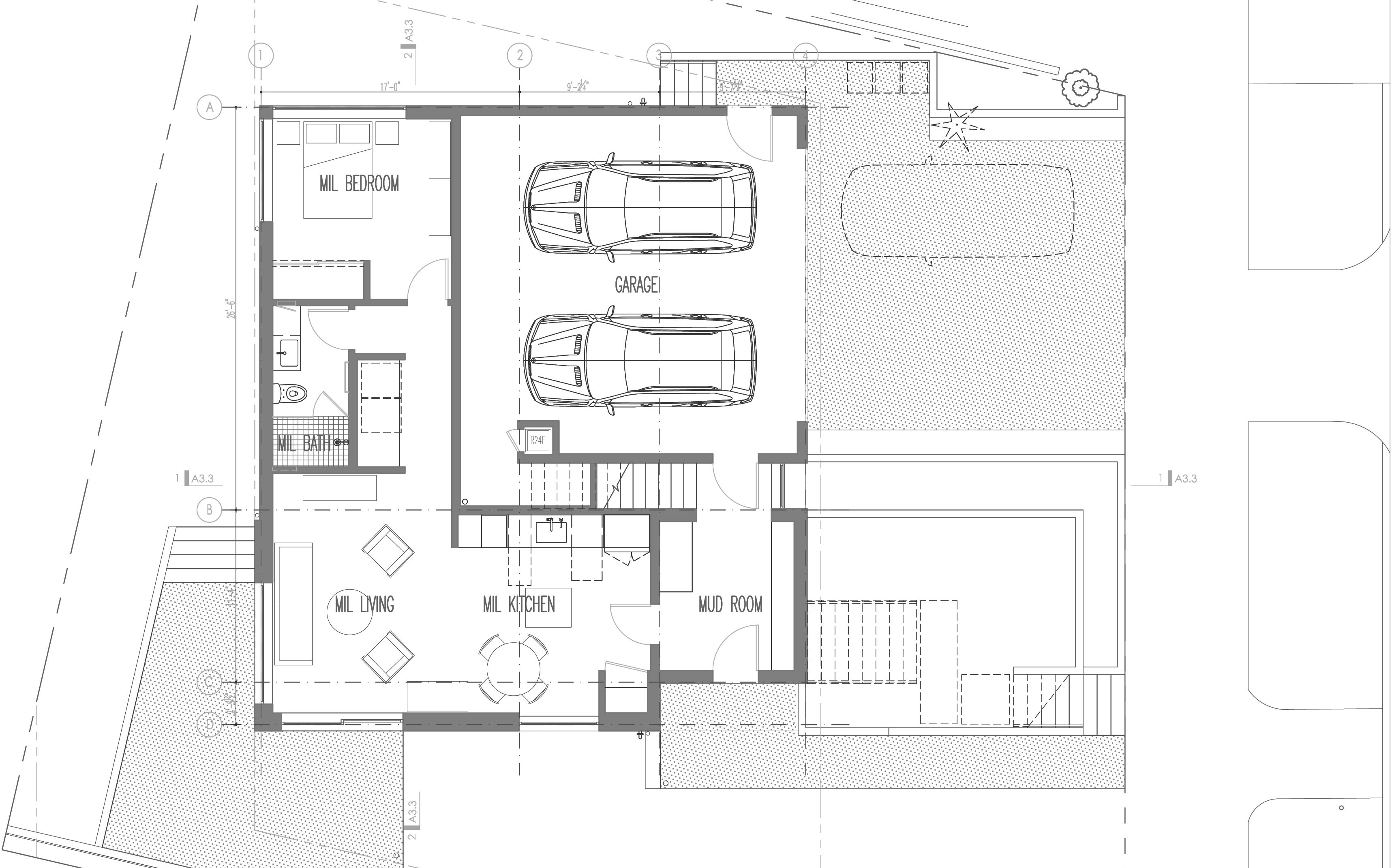 Park Modern Building
While it’s not a subdivided lot, an ADU/DADU, the conversation of affordability and livability in the city wouldn’t be complete without mentioning the Park Modern Building completed in 2007. This low-rise mixed-use, multi-family project was originally developed as a response to the need for affordable living in the city and continues to be a strong community of urbanites and forward-thinking businesses. The 12 residential units and 3 commercial spaces reside on a tidy lot of just 7,500 square feet (1.5 typical single family lots). The efficiencies of this sensible density have proved quite successful over the last 8 years and we’re still firm believers that Seattle needs to better support the medium sized mixed-use building type like the Park Modern. 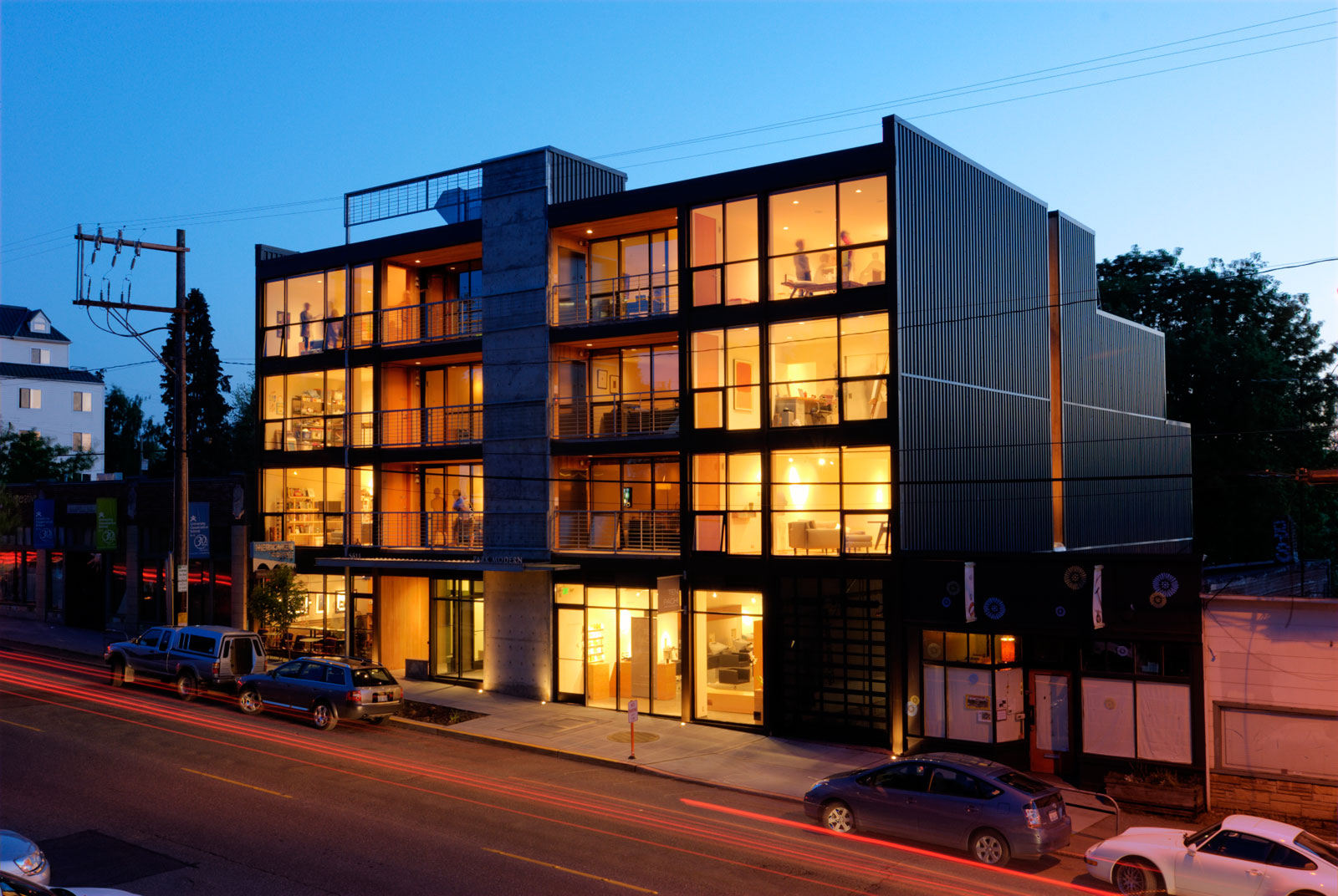 We plan to continue designing and building work like the 4 examples above, regardless of the decisions made by the city. As professionals who think about design and urbanism whether we’re on the clock or not, we’re clear about the solutions. While local media sensationalize poorly conceived arguments, and local politicians attempt to advance their own agenda’s (read: careers) at the expense of their citizens, we’re simply left with two actions:

1.Continue to find opportunities to push big picture changes forward wherever and however we can,
2.Leverage current land use provisions to create housing in the spirit of the as-yet-to-be-adapted provisions of the HALA report.

The Mayor’s decision to dismiss some of the most useful recommendations on Seattle’s urban growth doesn’t necessarily determine the city’s fate. We don’t believe that Seattle can maintain its affordability and livability (to say nothing of its diversity, culture, and urbanism) without a paradigm shift in our thinking and our policies. But perhaps this shift in thinking is that we, the citizens, have to take matters into our own hands rather than relying on policy to support the very recommendations the city worked so hard to produce.

Cheers to an Urban Future, from Team BUILD