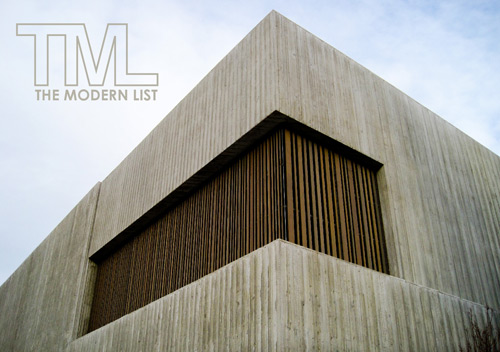 It’s been a few years since we’ve visited the high altitude urbanism going on in The Centennial State. On a recent visit last month, it had become clear that with each passing year Denver is becoming known as more than a city within striking distance of a high altitude playground.  The mountains will always be an integral part of the culture and growth of this city, but in the past year alone, Denver has (and by the looks of it will continue to) put itself on the art, culture, culinary, and architectural maps.  So when you book your next ski trip to Vail, it’ll be worth spending some time exploring the ever-changing Mile High City.

Clyfford Still Museum, 720-354-4880
Joining the ranks of the Denver Art Museum and the Museum of Contemporary Art, the newly opened jewel of a museum  holds its own as a compact, yet elegantly designed structure to house the work of the abstract expressionist. Designed by the northwest’s Allied Works Architecture, the collection will be on view as a rotating exhibit of Still’s works, many which haven’t been available for public viewing until now. Fun fact:Still spent a good chunk of his youth in Spokane and Pullman, Washington. For additional information on the progress and inaugural weekend (as well as sunnier photos), check archaalto’s blog. 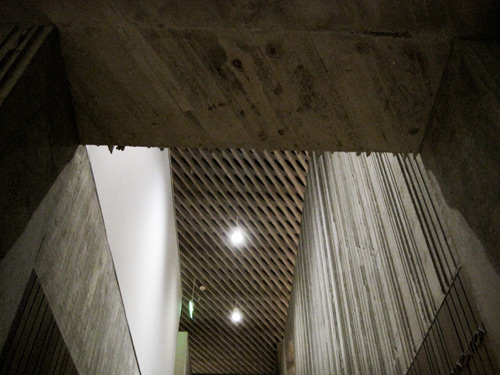 Kirkland Museum of Fine and Decorative Art, 303-832-8576
Tucked away uphill from museum-central is another museum dedicated to Vance Kirkland, a mid-century artist and art collector. Current exhibit is on Colorado abstract expressionism, a nice tie-in to the Still, a straight shot down 13th Avenue. 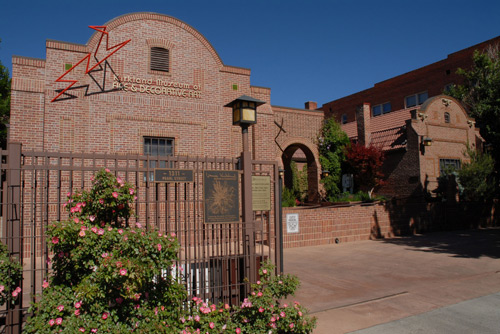 TAXI by Zeppelin, 303-573-0781
The site of the former Yellow Cab central hub in the River North (RiNo) District in NW Denver, TAXI is a mixed use development of condos, restaurants, and offices. The latest additon includes FREIGHT, a novel flexible office space. Zeppelin continues to stay busy with upcoming projects like The Taxi 3.3  Workshops – a fresh take on workplace communities, Greenhouse V.7 for green urban living , and The Source -an open marketplace for your local-sourcing needs. 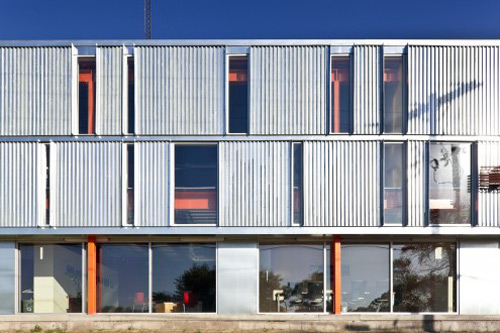 The Justice Center Courthouse, 720-337-0410
Originally slated to be designed by Steven Holl in collaboration with local firm klipp, the courthouse was finally completed in 2010 after Steven Holl left the project in 2006. 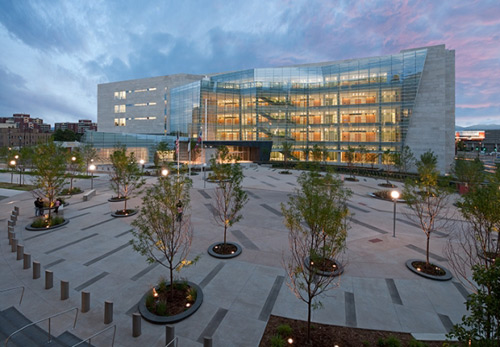 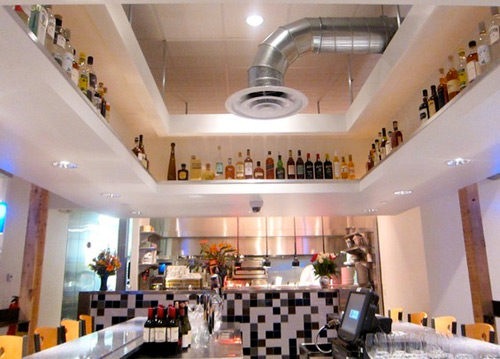 Masterpiece Delicatessen – sandwiches and salads in style and good taste in the booming Highlands neighborhood just across the pedestrian bridge from Downtown Denver.

Linger, 303-993-3120
Taking over the space of the former Olinger Mortuaries, Linger kept the rooftop signage, just turning off the “O.” 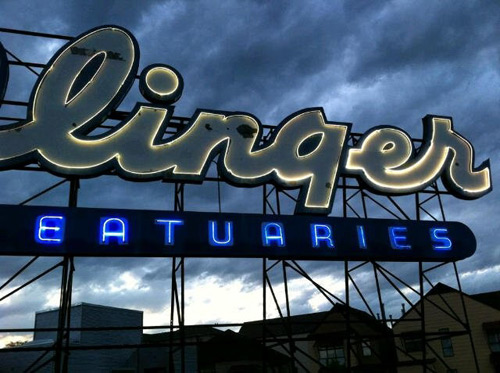 Biker Jim’s Gourmet Sausages,
We previously covered Biker Jim’s, the food cart. Even Bourdain gave Jim props for his wild game twist on the average hot dog.  As an early-adopter to the street food scene, Jim was ahead of the pack and poised to open his first brick & mortar location along the booming infill going on along Upper Larimer Street.  Complete with expanded menu, including…wait for it…deep-fried mac ‘n’ cheese. 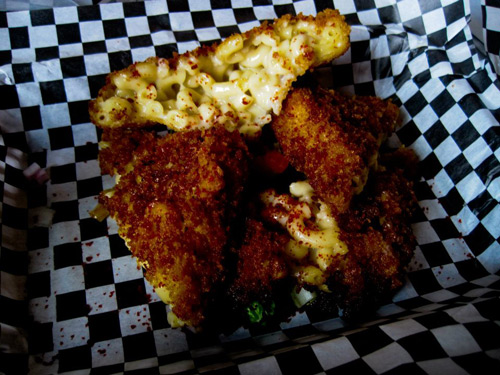 Snooze, 303-297-0700
The brunch scene in Denver experienced a boost with the addition of Snooze. So much so that several other locations have since opened, mostly in the vicinity, but one in San Diego as well. Go for the modern interior eye-candy, stay for the decadent pancakes. 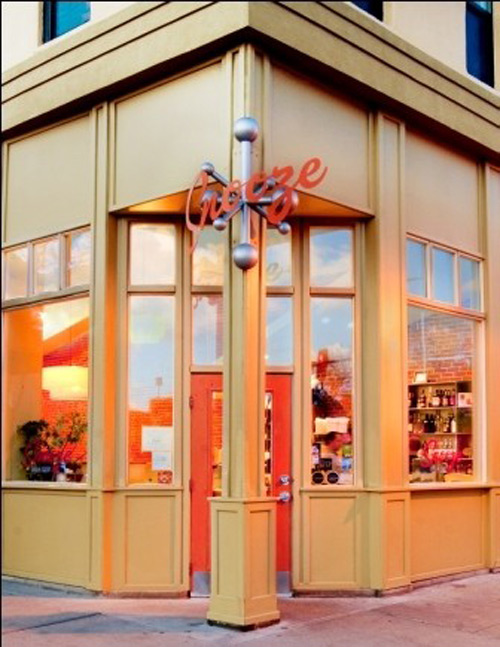 Hutch & Spoon, 303-296-2317
Following the trendy brunch trend, another satisfying spot to get your early day meal on along Upper Larimer. 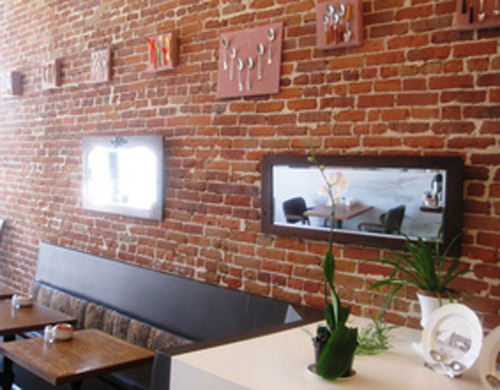 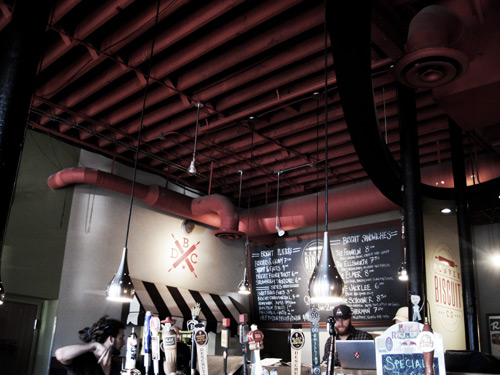 The Pig + Block Charcuterie, 303-455-6328
For all your charcuterie needs. And upcoming courses on making your own, if DIY is your sort of thing. 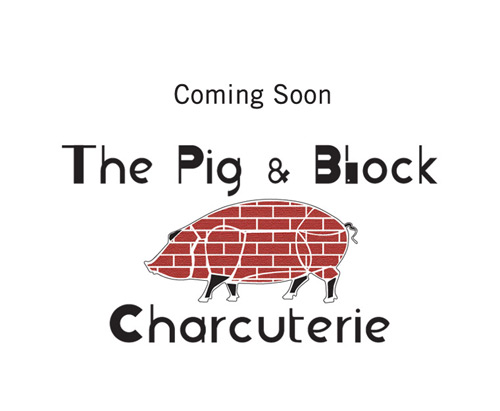 *Upcoming: The Source, 3350 Brighton Boulevard
The aforementioned project by Zeppelin Development slated to open later this year. It looks to be a hybrid of Seattle’s markets, Pike and Melrose, with the intent of local vendors housed within one space for your multiple-vendor one-stop sourcing needs. The market will be located in a space which formerly housed BUD’s Warehouse.

Infinite Monkey Theorem Wine, 303-736-8376
Located in a warehouse space in SW Denver, this inventive wine company is currently open  by appointment only. 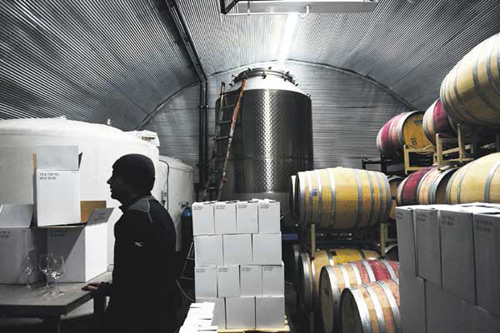 TAG, 303-996-9985
Cocktails and creative small plates in the historic Larimer Square, an urban block transitioning from its former identity as high-end local boutique shopping to food and drink destination.

Matchbox, 720-437-9100
Showcases local distilleries’ goods and stands as yet another business filling in the gaps along Larimer Street. Check out their facebook page for photos of their signage install. 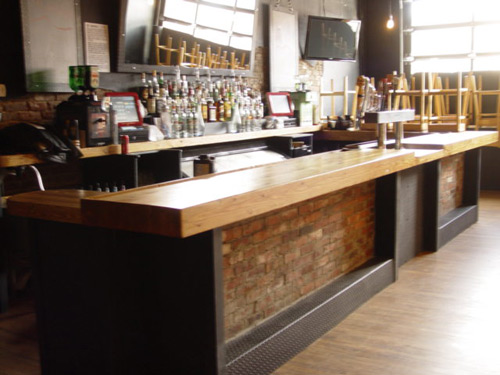 Crave Dessert Bar + Lounge, 303-586-4199
One of the new additions to both the dessert and 14th Street pedestrian scenes. 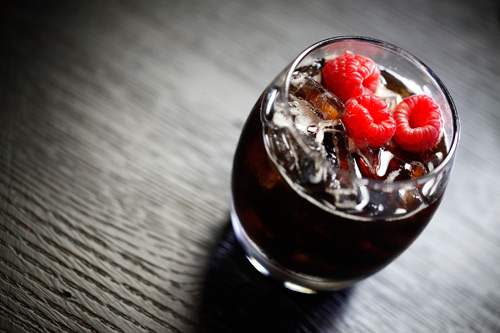 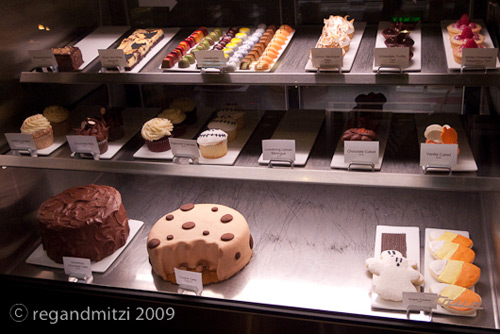 It’s impossible to keep up with the rotating dessert trends, but it seems froyo’s pretty hot these days.

BOOM Yogurt Bar, 303-440-3805
Denver may have landed the venerable Pinkberry, but Boulder hits back hard with sleek design aesthetics and wins significant points for the small business with locally sourced ingredients. 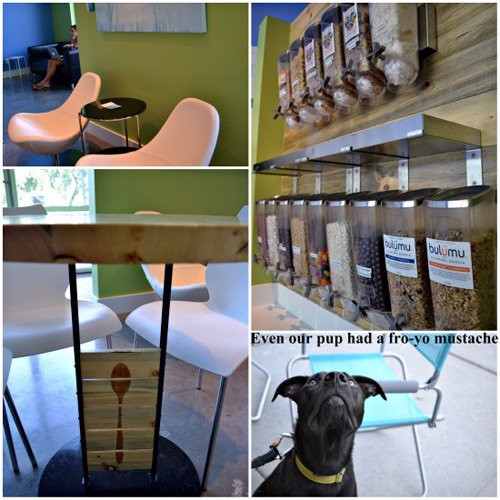 Then there’s the other frozen treat that never goes out of style: Ice cream. Two new on the scene are Little Man, within view from Linger, and Sweet Action, smack in the heart of South Broadway’s shopping district. 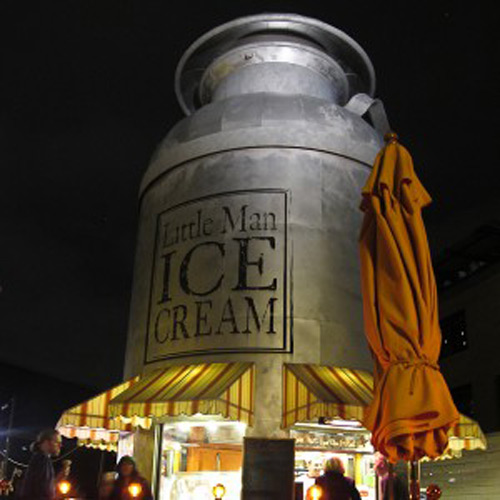 For Pacific Northwesterners, coffee is life fuel. But it’s also a point of urban culture, serving as a neighborhood anchor and water-cooler. Something we couldn’t ignore on this last trip to Denver was the influx of new, good coffee shops and roasters in the city. So, we’re calling it: 2012 will be The Year of Coffee in Denver (and Boulder, and possibly the entire Front Range). The third wave is swelling and we’re ready for it.

Crema Coffeehouse, 720-235-2995
An appropriate add to the Upper Larimer stretch, Crema serves up coffee from all over (including Seattle’s Herkimer and Victrola!) and shows love to the booming third wave roasting scene in Colorado and across the country. In the short time since its opening two years ago, it’s already expanded to double its size. Get the full photo tour here. 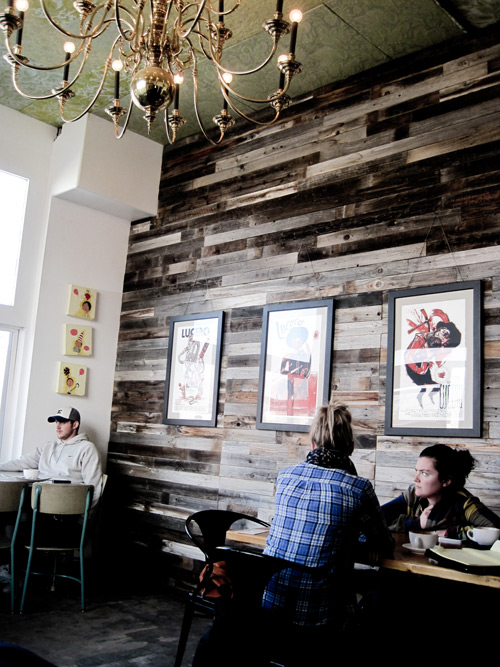 Huckleberry Roasters, 720-381-2504
The founders of this micro-roaster a half blcok down from Crema, have an infectious passion for coffee, from the sourcing to the serving. They host daily cuppings featuring a different bean and a different filtering method. 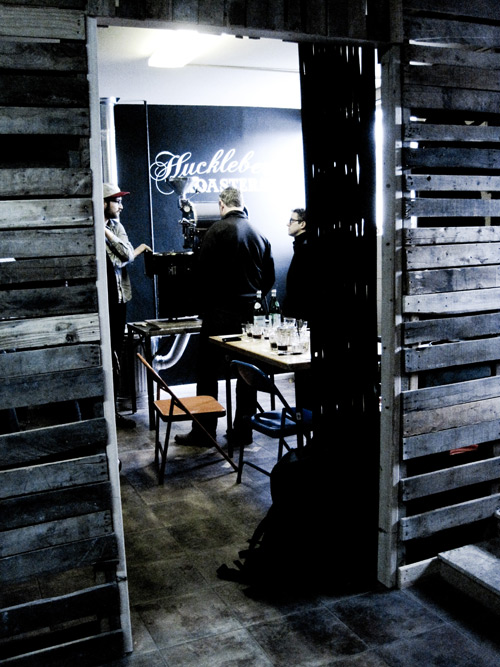 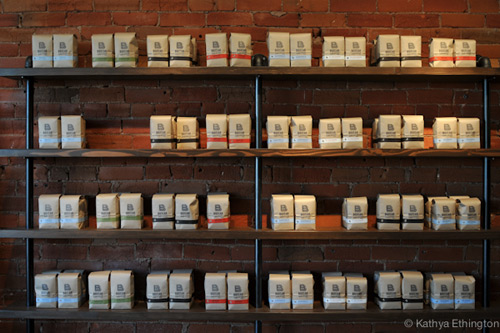 *Upcoming: 2914 Coffee in the Higlands neighborhood. Because every neighborhood needs their own coffeeshop. At least.  And Happy Coffee, which is currently operating out of Salvagetti Bicycle Workshop, is on track to open its own space this “wintry spring” on South Broadway. 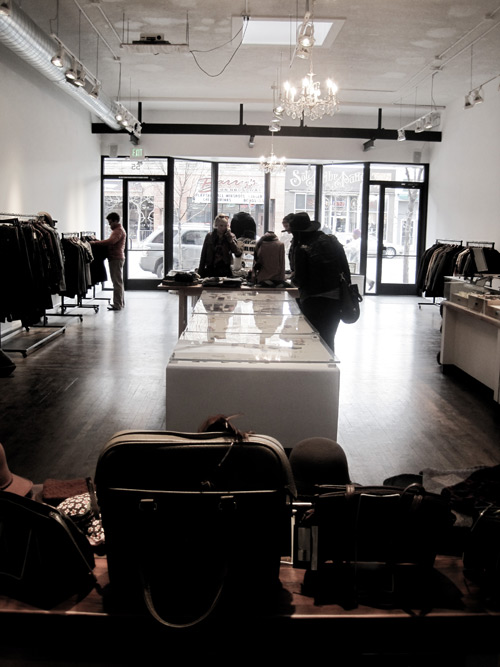 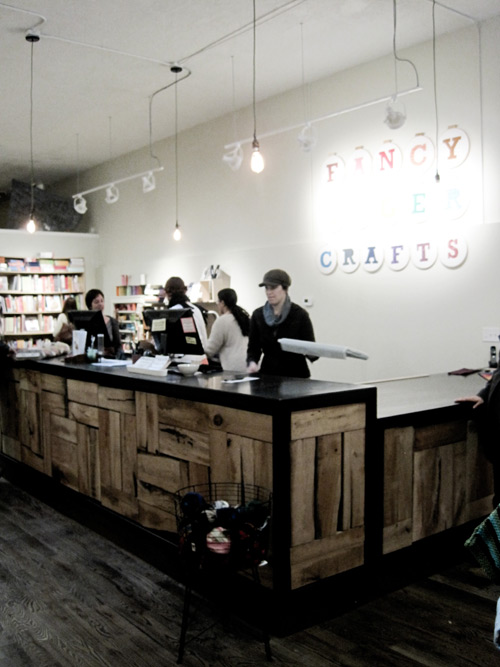 Buffalo exchange, 303-866-0165
It’s more than your run-of-the-mill recycled clothing store. The location(s) in Denver has expanded/relocated to the South Broadway shopping district into a newly refinished space that rivals any first-run boutique. 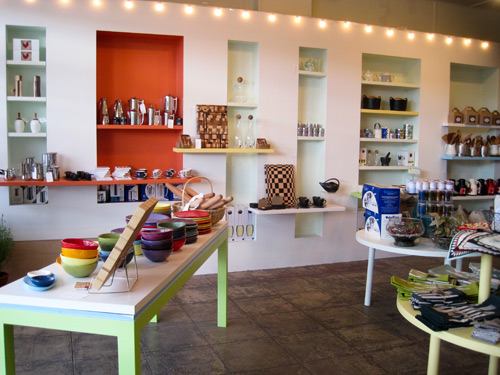 …And in a sea of chain restaurants and shops along the 16th Street Mall, an outlier emerges…

I Heart Denver Store, Denver Pavilions
Proven a shopping destination, the local-only boutique is a refreshing independent business oasis on 16th Street Pedestrian Mall, tucked behind an Express and beneath a Lucky Strike Bowl. This hidden gem showcases 100% local designers, and the search will be worth your while. Added bonus: A cultural interactive map near the entrance. 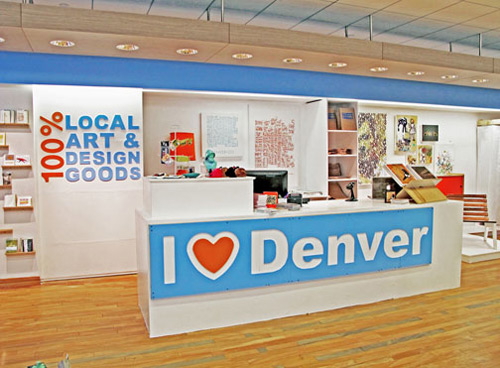 B Cycle, multiple stations throughout the city
Seattle may have a one-up on Light Rail expansion to the airport, but Denver’s got us beat (so far) on the bike share, which is quickly becoming a barometer for vibrant urban life. The Democratic National Convention in 2008 jump-started the program, and has since expanded bike stations throughout the city. Tip: Not available during winter. 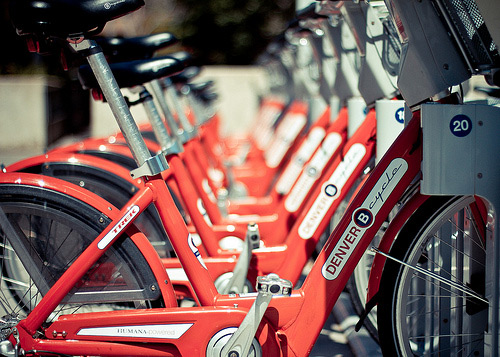 That about covers this round. Let us know of anything we missed in the comments below.