Home 2020 July The Building Blocks of A Forward Thinking City

The Building Blocks of A Forward Thinking City

Like many creative capitals in the U.S., Seattle is experiencing unprecedented growth and evolution. In many ways it’s exciting to play a role in this, and to experience a city crossing important thresholds. As designers, thinkers and individuals concerned with the nature of our cities, we’re also conscious of the perils of rapid growth. One such consequence is the loss of scale in our urban fabric. Overly-difficult permit requirements, the pursuit of an ever-more optimal pro-forma, and the almighty return on investment push new developments to become larger and more concentrated. These days it’s not unusual for multi-family projects in Seattle to occupy entire city blocks; and if they’re executed thoughtlessly, and without appropriate curation, these mega-developments break down the granularity and character of established communities. If too many of these behemoths are created in a particular neighborhood, the very diversity and culture that people desire in their city is erased.

Today’s article is a salute to smaller, more granular buildings in Seattle that support density and growth in the city, while fostering diversity and character. Some of these projects are mixed-use, some are multi-family, and others are adaptive reuse or urban infill. And all have been created by thoughtful design and development teams that are thinking critically about the nature of urbanism, and responding with masterful solutions. Fitting like puzzle pieces into their respective neighborhoods, these projects are critical to the success of a thriving metropolis. Their architectural agility allows the character of a community to flourish, while their crafted designs are responsive to a particular place and circumstance. For all of these reasons, we are advocates for these smaller, smarter, responsive buildings. There are dozens of projects that embody these qualities, and we’ve selected a handful to highlight.

Inspire developed by Shilshole Development and designed by Public 47
3825 Bridge Way N
Responding to its triangular site in Seattle’s Wallingford neighborhood, Inspire brings an articulation and finesse rarely achieved in multi-family buildings. A handful of clever details elevate this apartment building into a sophisticated architectural language. 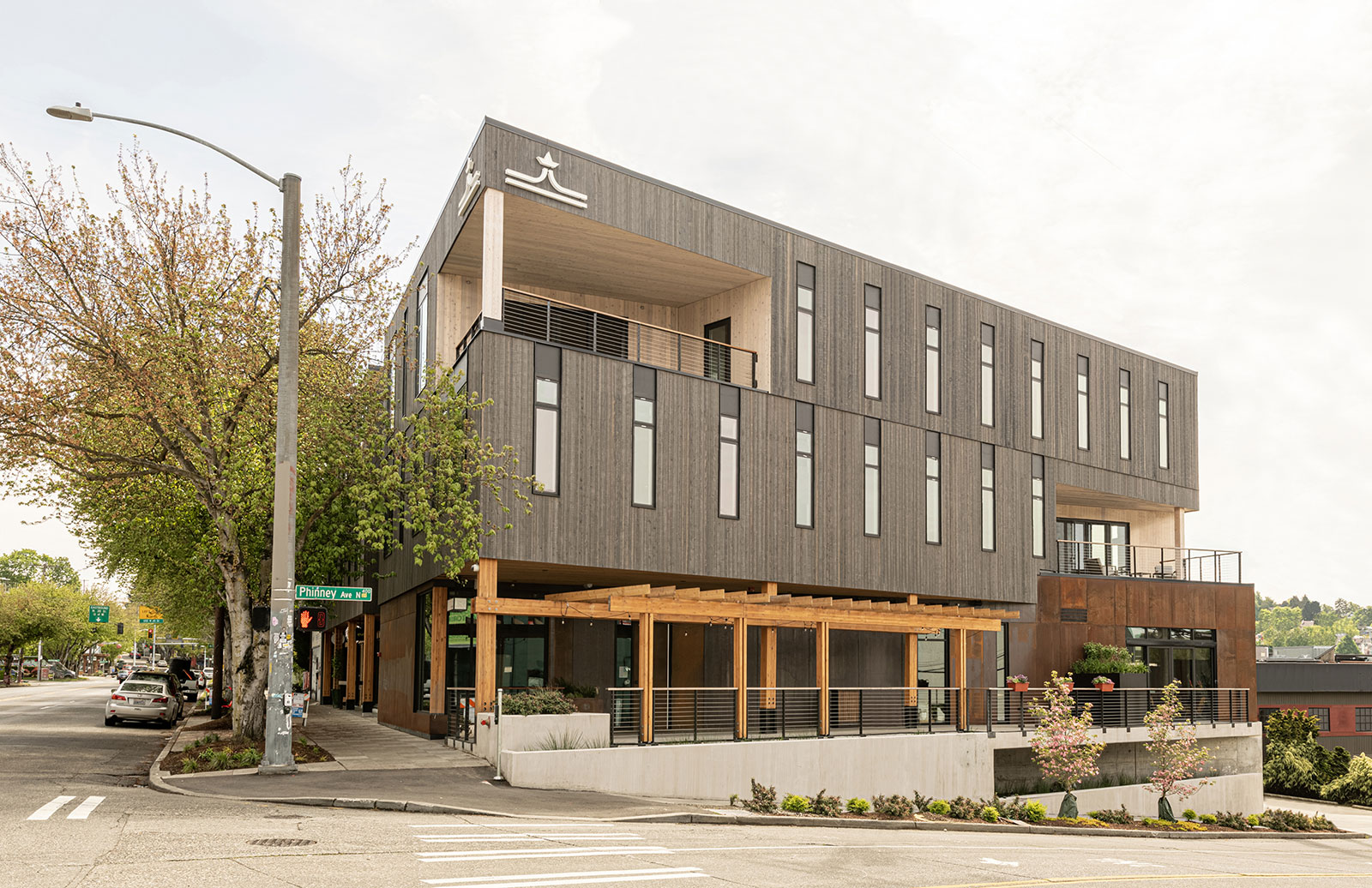 Cedar Speedster developed by Evolution Projects, HCG Group & Mark Grey and designed by Weber Thompson
401 N 36th St
With ground floor retail, the beloved anchor restaurant Revel, and two levels of leasable office space, the Cedar Speedster is a careful insertion into Seattle’s Fremont neighborhood. The design achieves a new, forward-thinking structure, while establishing an aesthetic that seems to have belonged there all along. 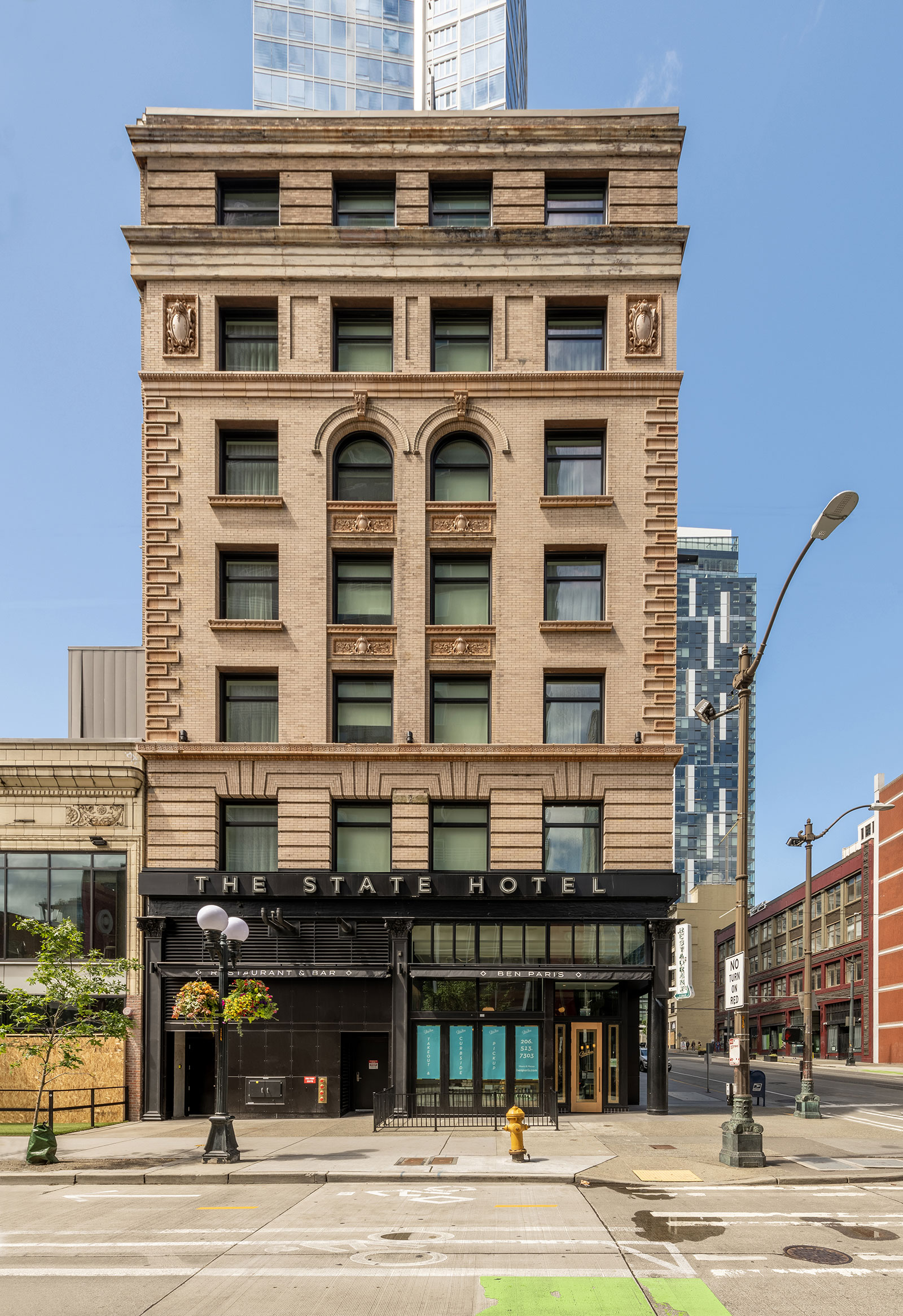 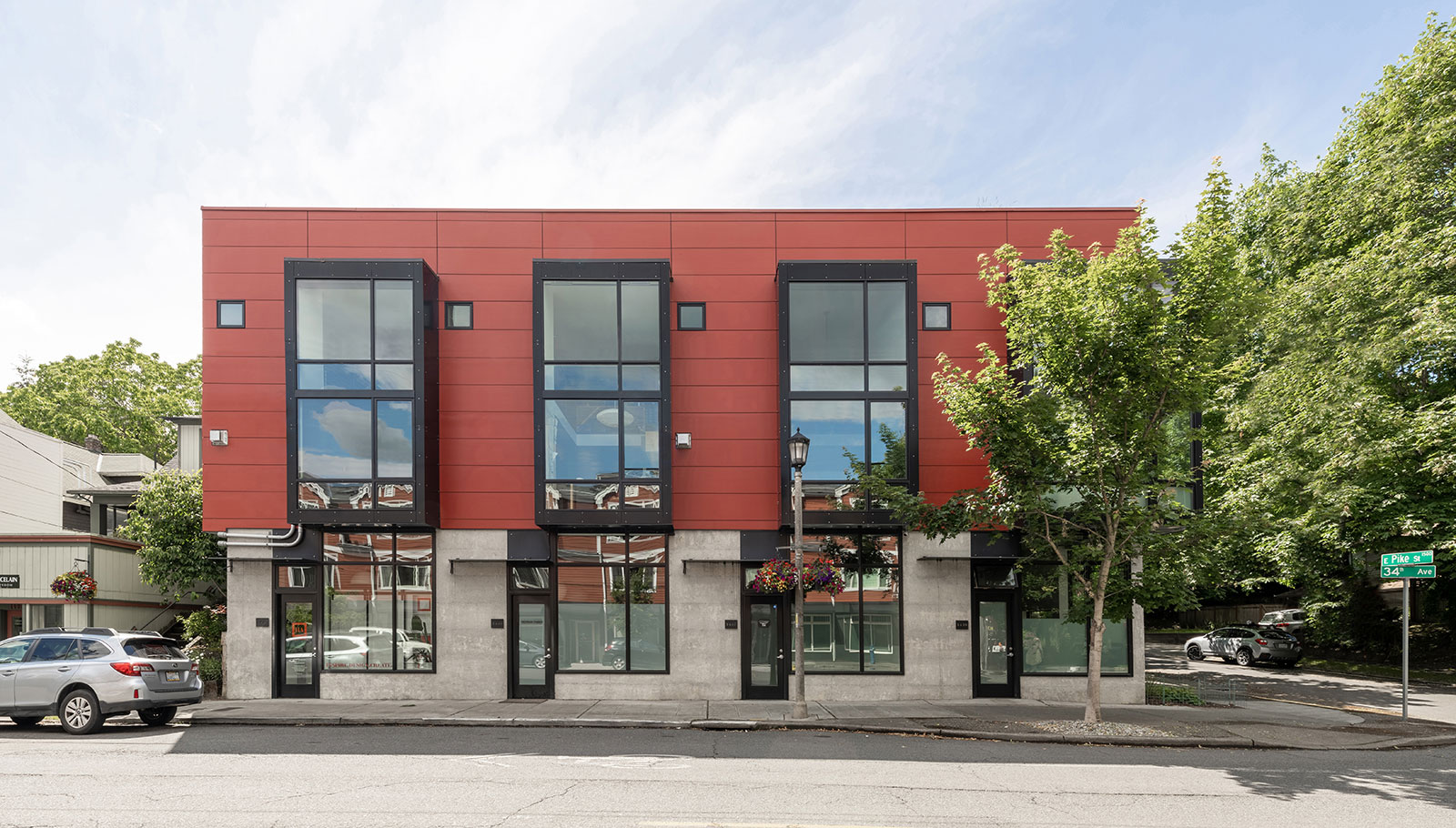 Pike Station developed by Shilshole Development and designed atelierjones
1433 34th Ave
Handsome and well organized, Pike Station neatly tucks into the commercial core of Seattle’s Madrona neighborhood. The multi-family building includes thoughtful live-work units at the ground floor, and multi-level apartments above, all within an envelope that complements the surrounding community. 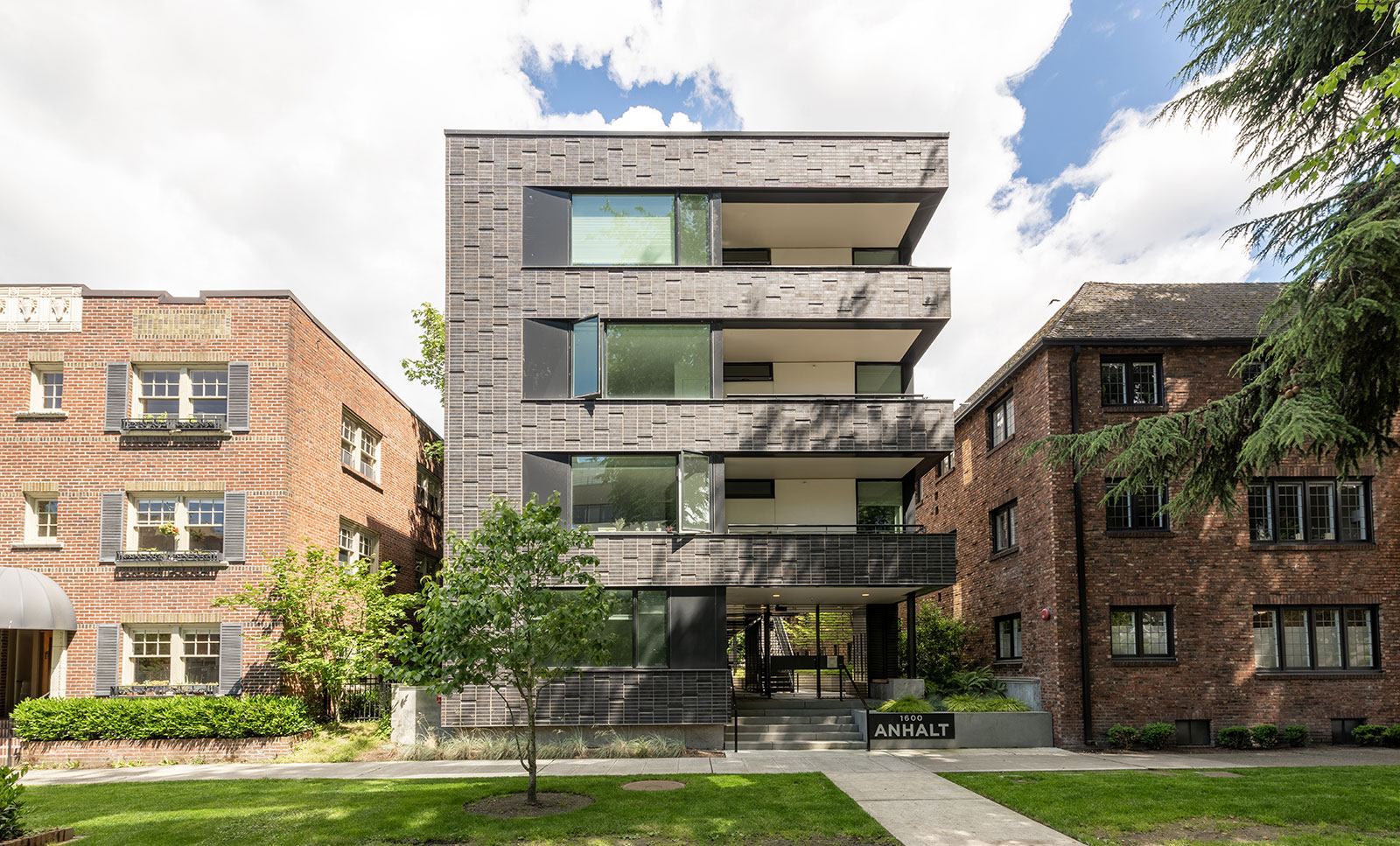 Anhalt Apartments, Renovation + Addition developed by Trinity Real Estate and designed by Public47
1600 E John St
Fitting delicately into an arrangement of older brick buildings in Seattle’s Capitol Hill neighborhood, the Anhalt Apartments uses modern materials and methods to complement the historic structures around it. A crisp geometry and thoughtful articulation create a structure with sensitivity to its context. 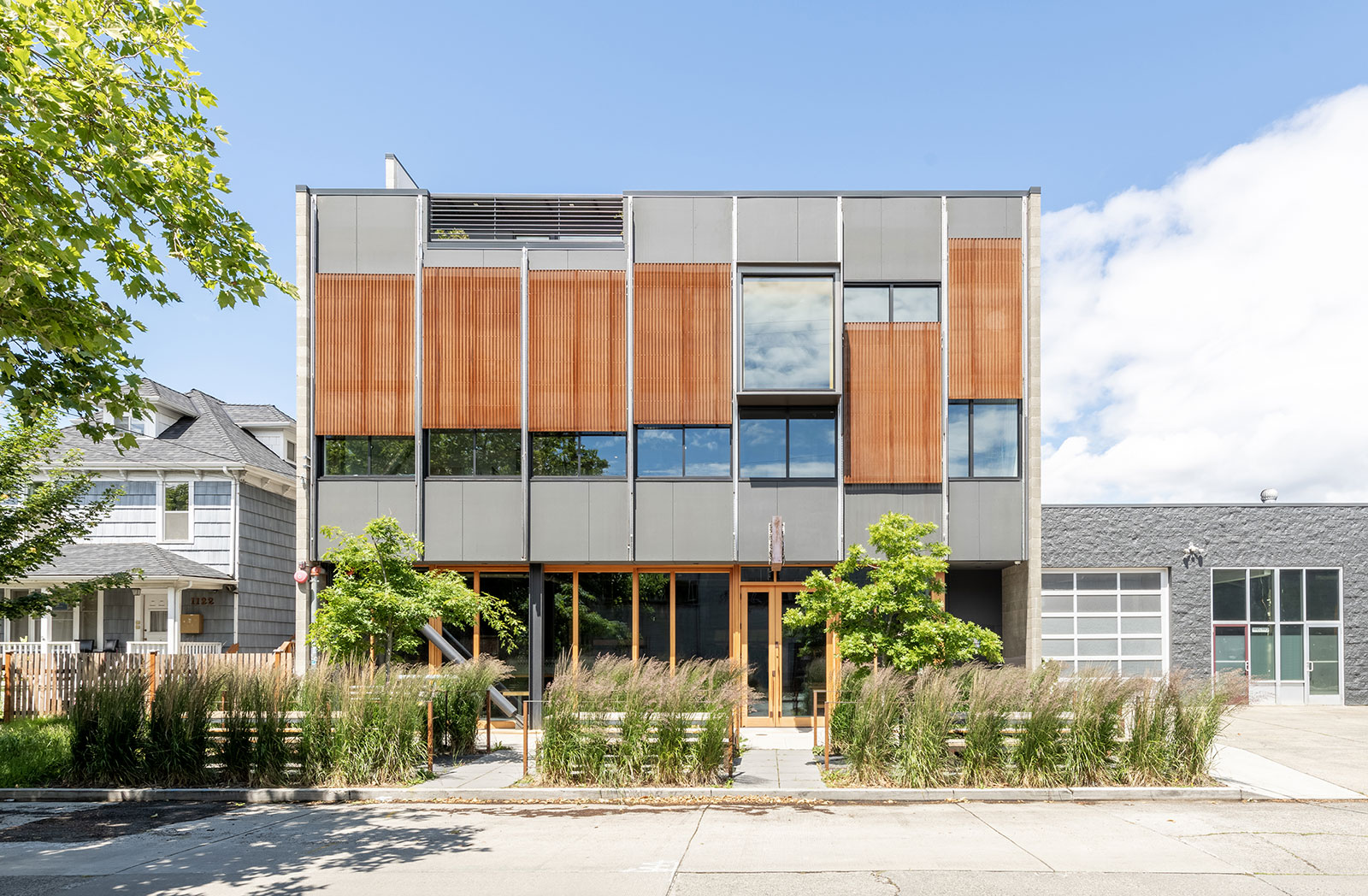 Klotski Building developed by Sockeye Ventures and designed by Graham Baba Architects
1118 NW 50th St
Staying true to its industrial environment, the Klotski building is a mix of office, commercial, and residential uses in the heart of Seattle’s Ballard neighborhood. Vertically sliding exterior steel screens allow variation with the building’s façade, while lending grit and texture to the neighborhood. As a gesture to the community, the design gives back with a sun-filled outdoor seating area for the ground floor Trailbend Taproom. 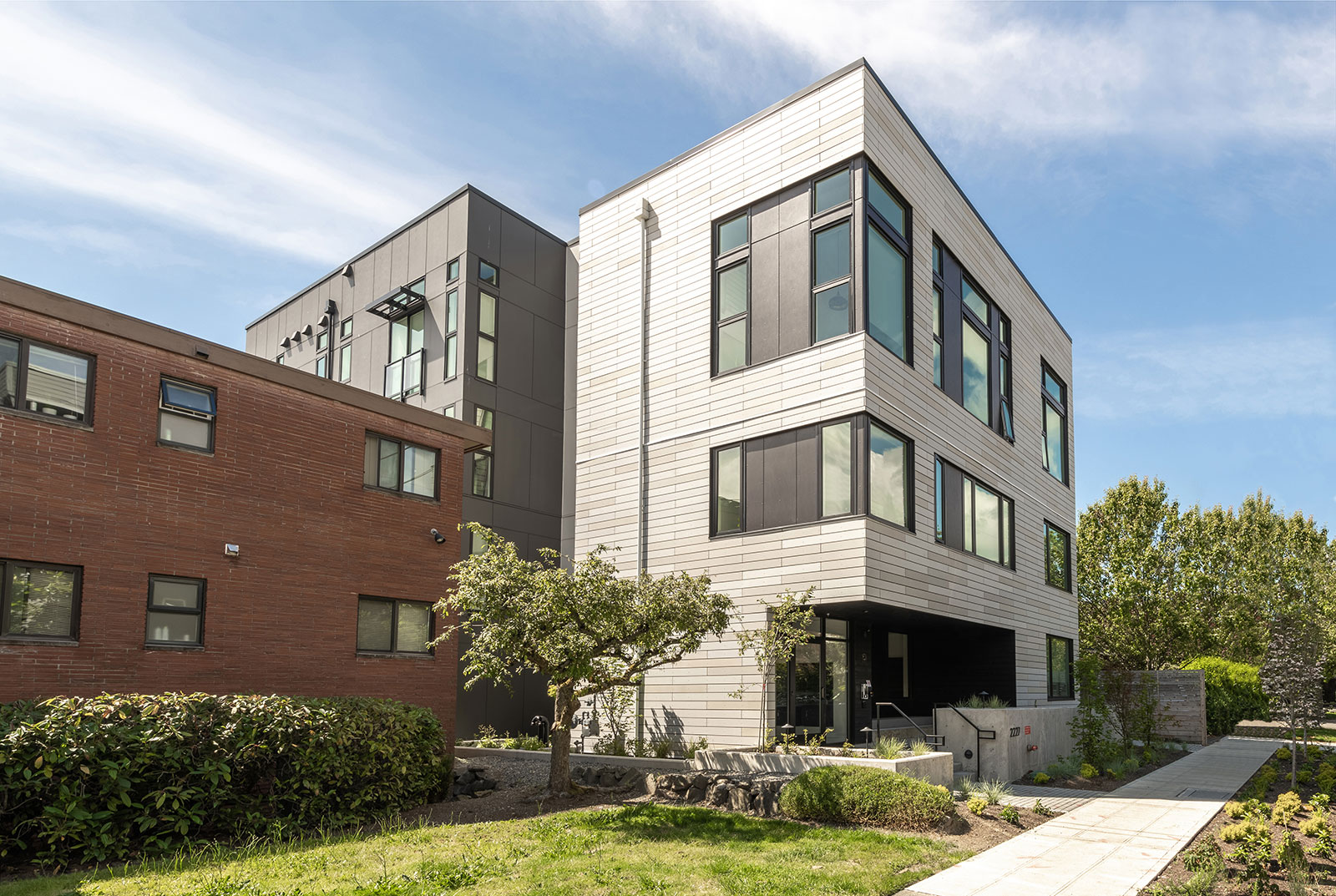 2227 Yale Ave E Apartments developed by SolTerra and designed by Neiman Taber
2227 Yale Ave E
Tucked into an eclectic neighborhood of older homes and small apartment buildings, the design minimizes the scale of the building at the street front. Using simple geometries of brick, the structure reflects its surroundings without replicating them. 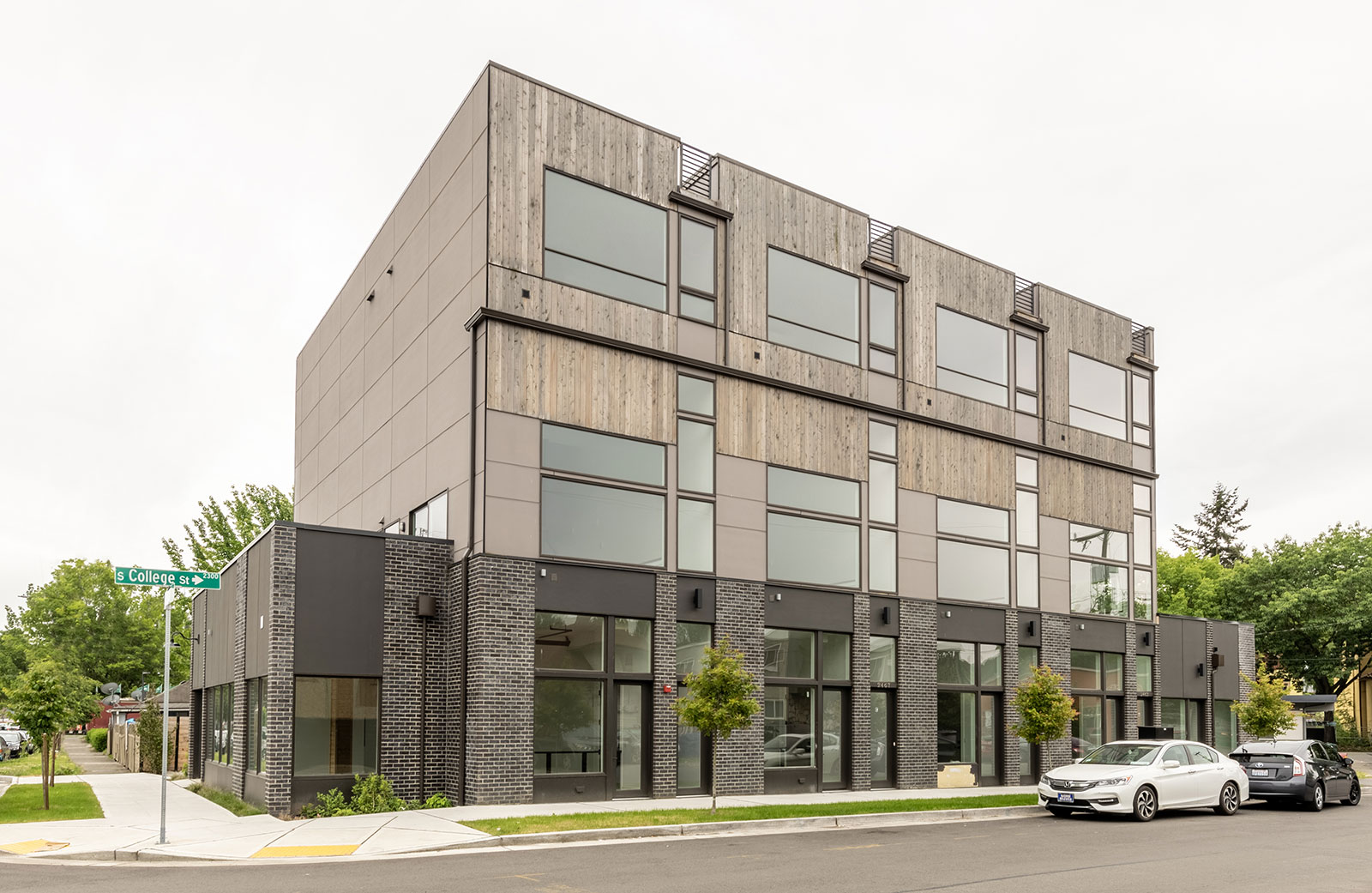 Work Lofts developed by Barcelo Homes and designed by Hybrid
2467 S. College St
Four loft-configured living units sit above ground floor studio/retail spaces, creating a catalyst of a building for live-work and small shops. The development is an important piece in the Mt. Baker neighborhood of Seattle, a transitional community with residential and manufacturing roots. 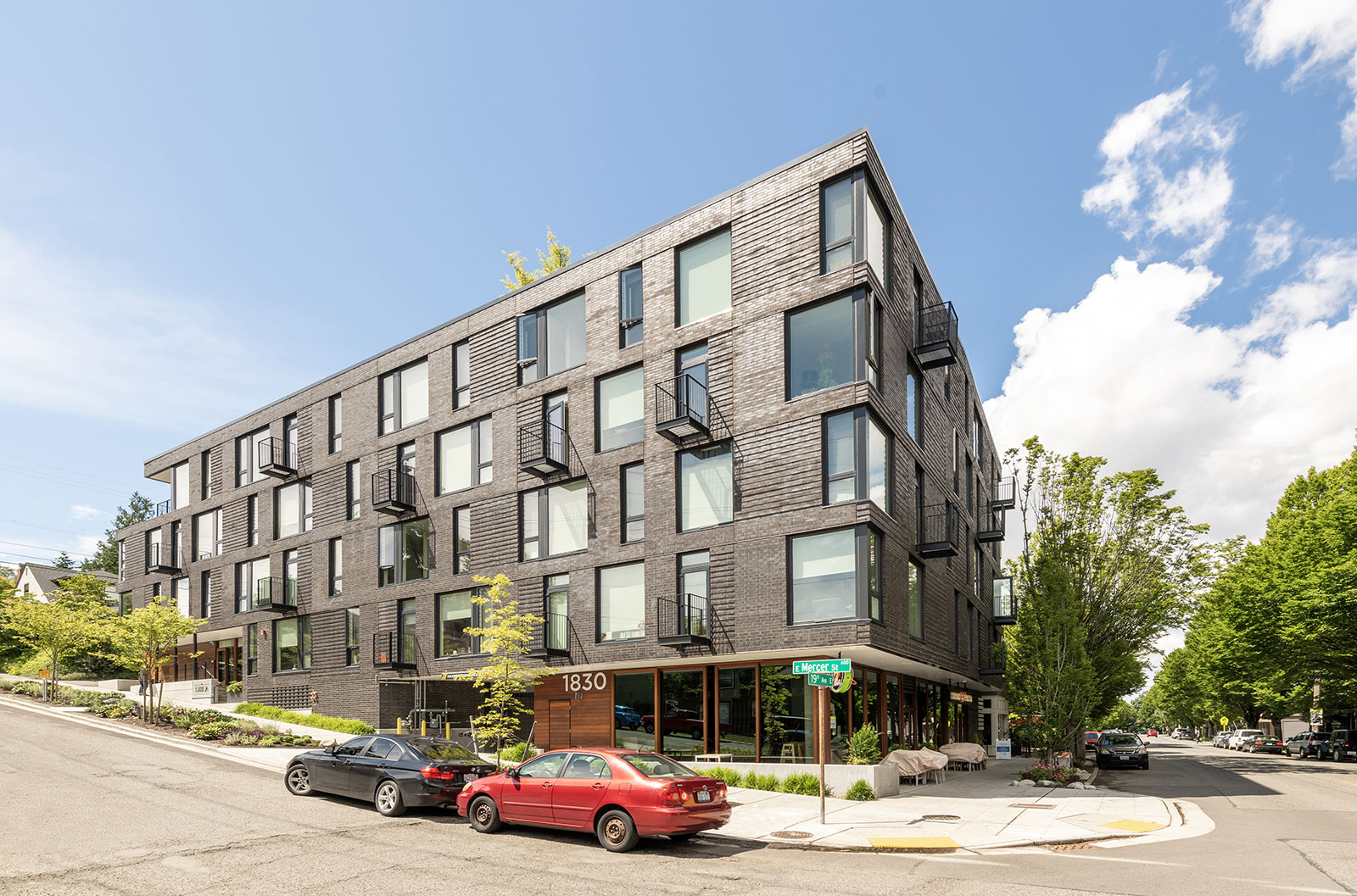 The Shea developed by Epic Property Management and designed by Public47
1830 E Mercer St
The mixed use Shea development adds curated restaurant space and handsome residential flats to an important intersection of Seattle’s north Capitol Hill neighborhood. The structure thoughtfully nestles into a sloping site, while articulated brickwork brings a welcomed texture to the neighborhood. 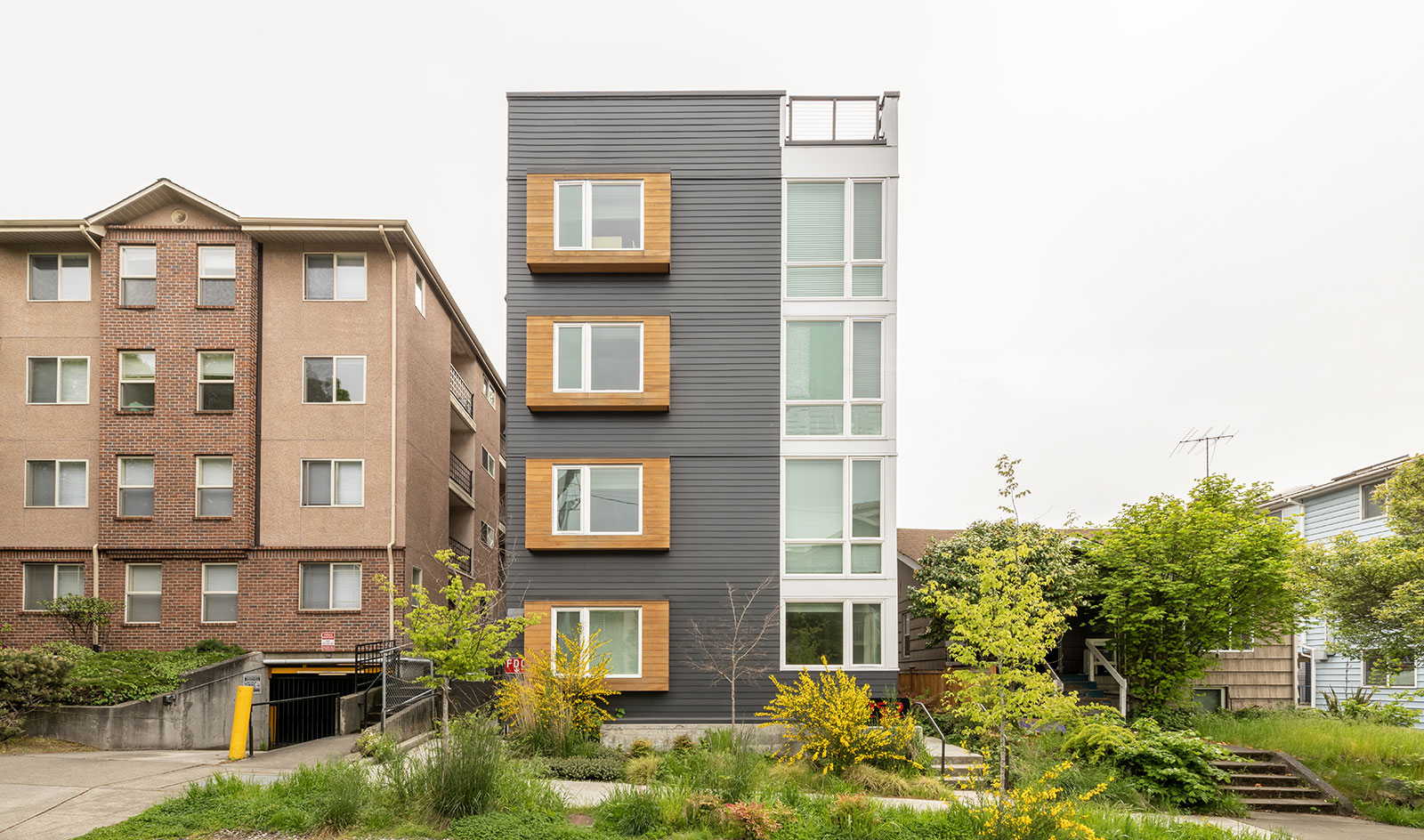 The Willet developed by Kamiak and designed by Ryan Rhodes Designs
4252 8th Ave NE
The Willet is a pleasant surprise in Seattle’s U-District, where the population is transitory in nature, which the architecture often reflects. With simple geometric moves, the building achieves a handsome rationale, and sets a new bar for university housing. 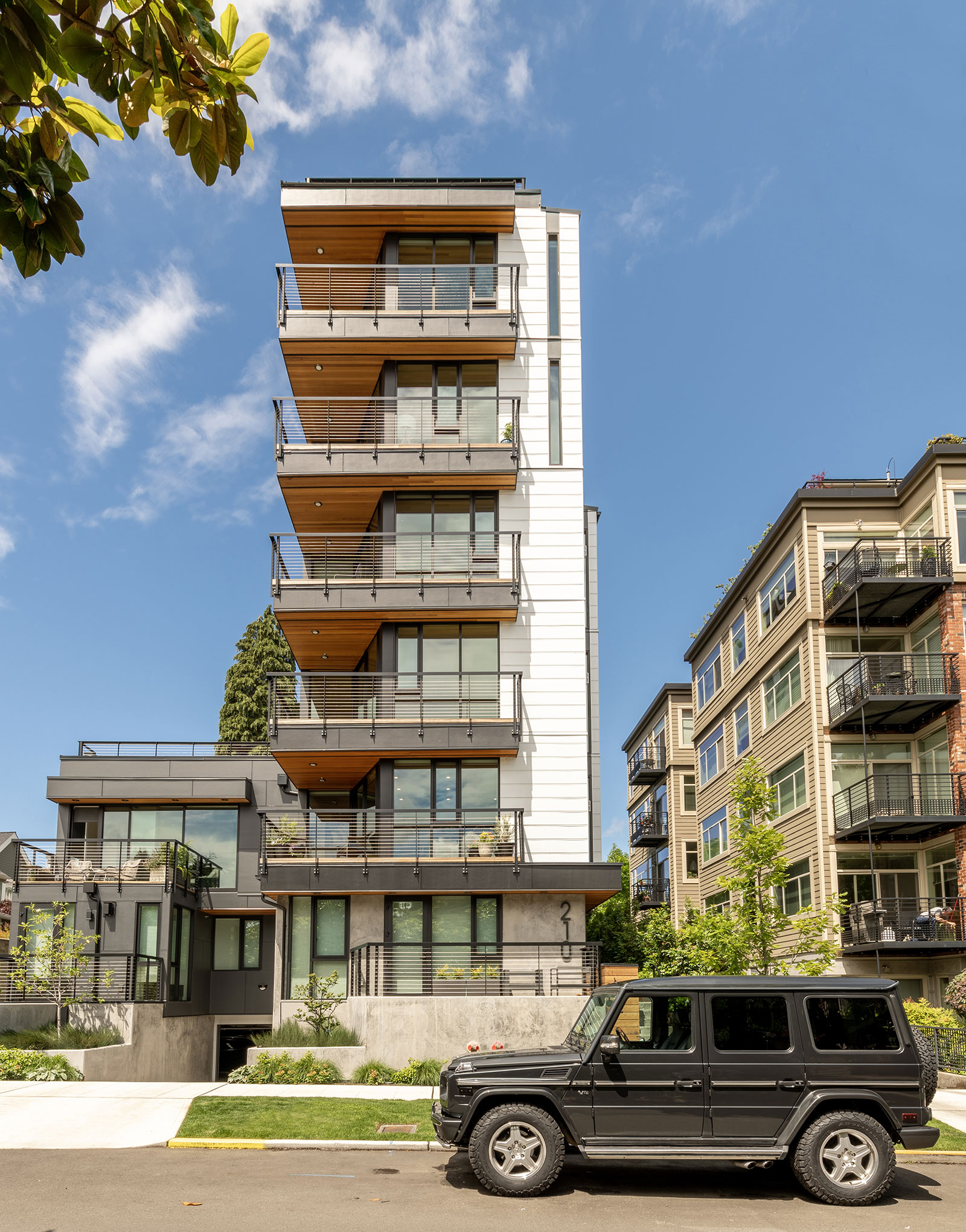 While each of these projects is different, they all share a common thread: the design and development teams made a conscious decision to foster a particular community with a smaller-scale, more granular project. This development approach often takes just as much effort and time as larger, more profitable projects. Seattle’s permitting process doesn’t necessarily recognize or reward developments of an intimate scale—in fact, they often penalize them with permitting requirements commensurate with large projects. These project teams likely swam upstream in order to protect the diversity and character of the city.

It’s also important to note that these projects don’t just look sharp, they also perform well. Understanding their value requires experiencing them; knowing the ground floor café, observing the community within, and appreciating how they fit into neighborhoods that have taken decades to evolve. For all of these reasons and more, these projects are worth knowing in Seattle. As a city, if we care about urbanism, diversity, and retaining authentic character, projects like these set the example.