On Thursday, July 11, Gordon Walker, A Poetic Architecture, by historian, architect, and professor emeritus Grant Hildebrand, will launch at Peter Miller Books in Seattle. It’s been a years-long passion project for a couple of us here at the BUILD World Headquarters, and we couldn’t be happier with the finished product. Kelly Rodriguez, BUILD’s Manager of Operations, managed the project and coordinated everything from fundraising; to Grant Hildebrand’s elegant prose; to Jeffrey Murdock’s writing assistance; to the masterfully illustrated studies of Walker’s work by Bill Hook; to finessing the final manuscript with lead book designer Ryan Polich and the greater team at Lucia Marquand—not to mention corralling a reluctant subject throughout the process. And BUILD’s Andrew van Leeuwen hunted down Gordon’s projects all over the Pacific Northwest in an effort to provide a fresh photographic perspective. For a behind the scenes discussion with the book team about the project, head over to ARCADE.

For those of you with design experience in Seattle, you’re likely familiar with the work of Gordon Walker, or maybe you’ve even been lucky enough to work with him. And for those of you working in a design-related profession outside the Pacific Northwest, Walker is someone you should know about. His 57-year (and counting) career in architecture has produced some of the most important and influential buildings in and around the Pacific Northwest. A true master architect, Gordon has been a mentor and teacher to an entire generation of architects and designers in the region. For many of us, this book is a necessary document, illustrating a significant trajectory of design in the Pacific Northwest. We can’t begin to scratch the surface of the history of Gordon and his work, but of course, that’s what the book is for. What we are going to do is provide a teaser of why you need this document on your desk. Today’s post primarily features images that did not make it into the book; to see the final selections, head over to the launch/book signing party at Peter Miller Books on Thursday, July 11th, when you’ll be able to purchase your very own copy and say hello to Gordon and Grant. BUILD will be there—join us! 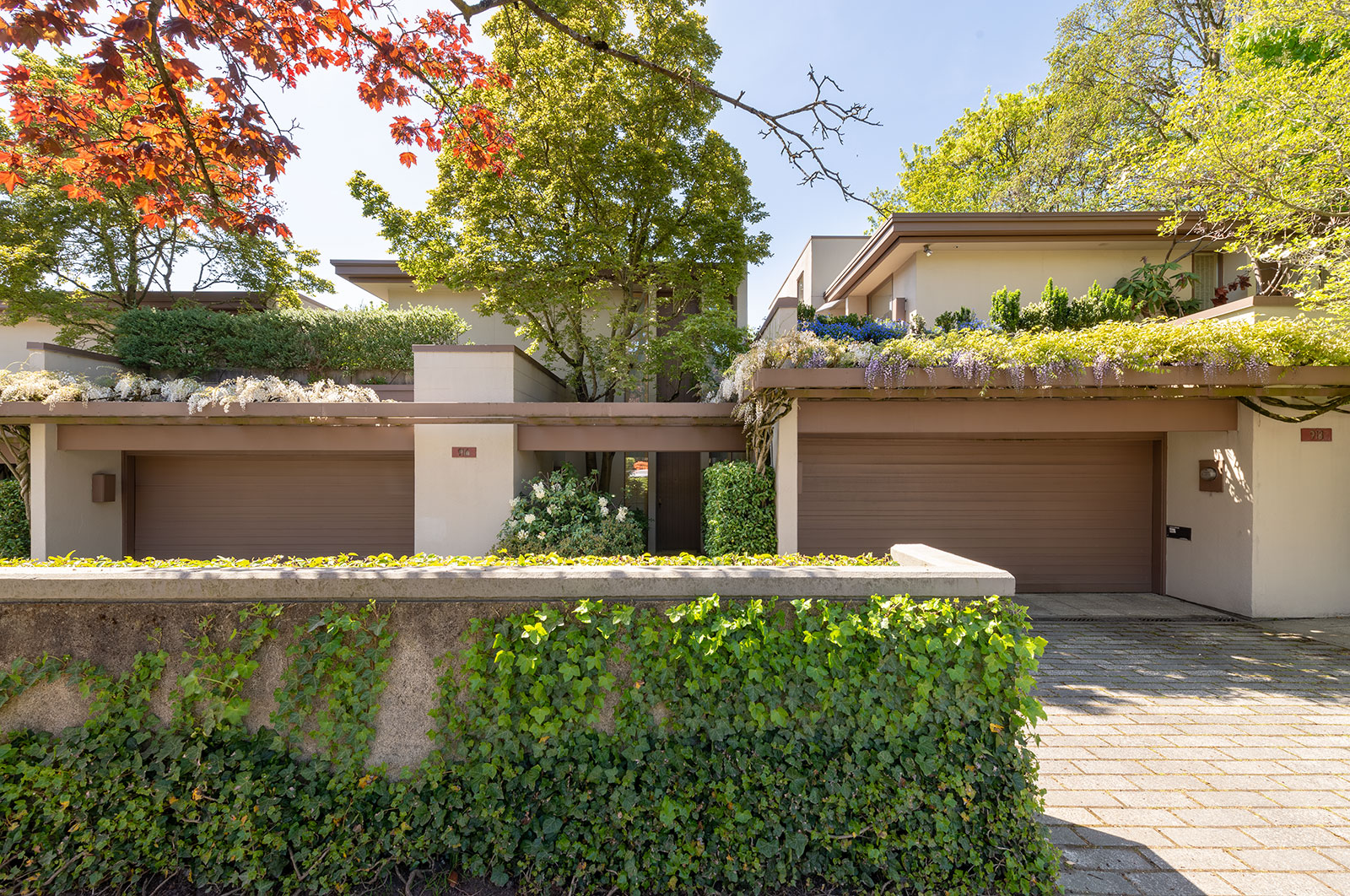 The Smith Town Houses, Seattle
A modern fixture at the north end of Seattle’s Capitol Hill, we look forward to the explosion of color each spring from the wisteria as it engulfs the trellises. 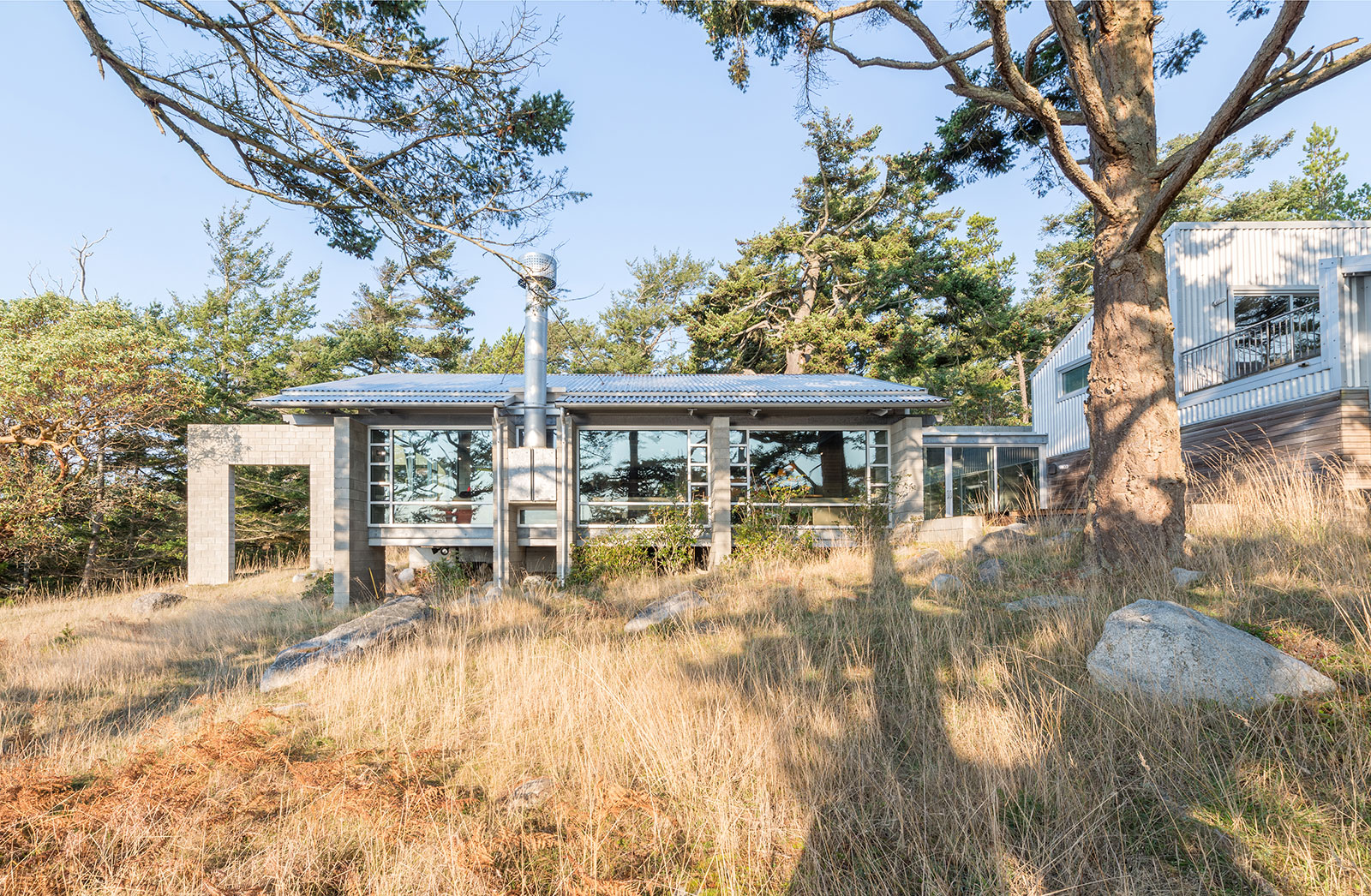 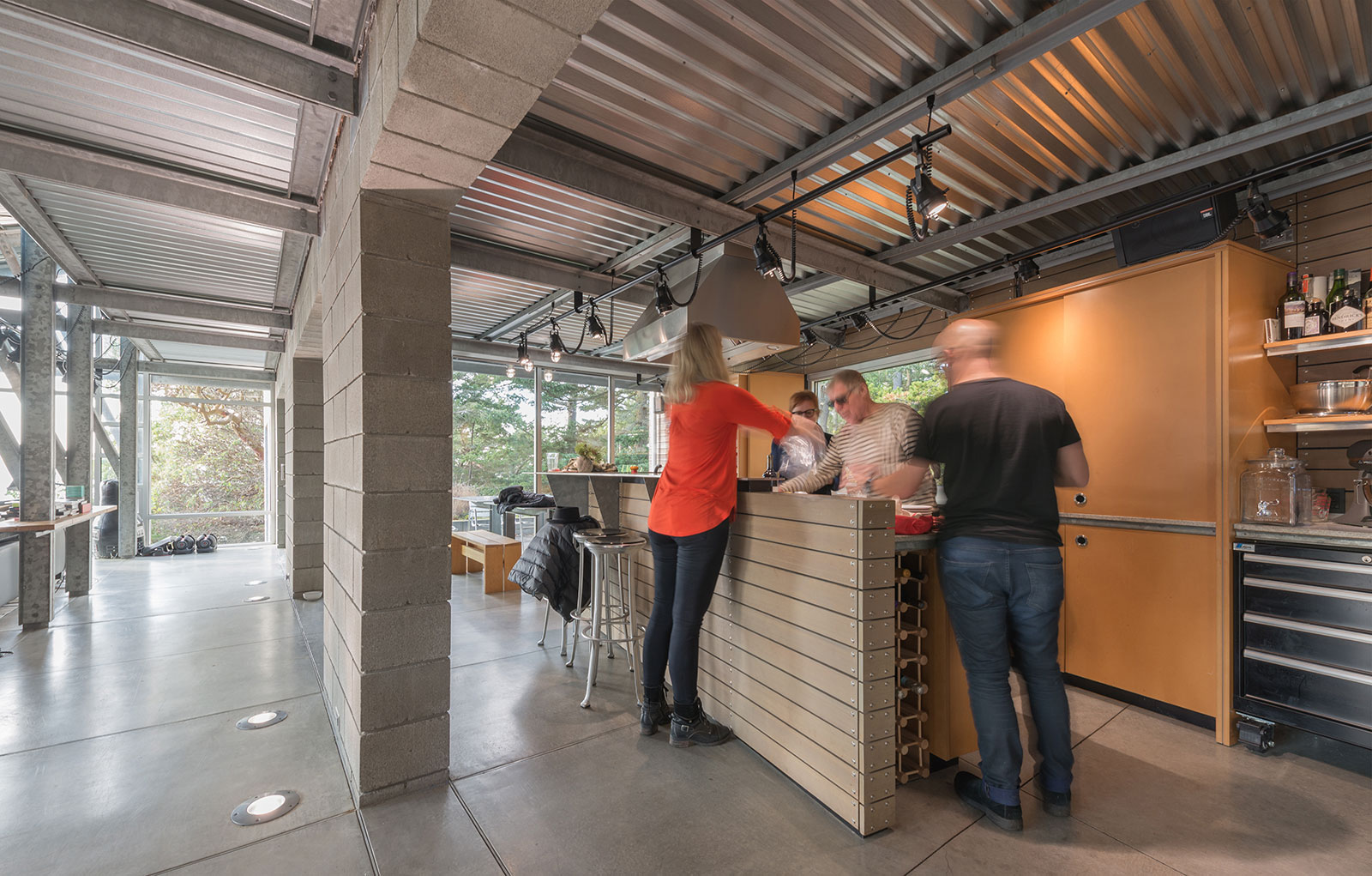 Conte House, Lopez Island Washington
Perched on the scraggly bluffs of Lopez Island, we enjoy the clear concept of this design. A continuous CMU frame cuts through the site, defining an interior hallway and connecting the house, garage and guesthouse before advancing into the landscape beyond.

Hillclimb Court, Seattle
To us, this project has always been an example of how wonderful urban living can be when it includes common courtyard space and greenery. The project sits in the heart of downtown, just a salmon’s throw from the Pike Place Market. 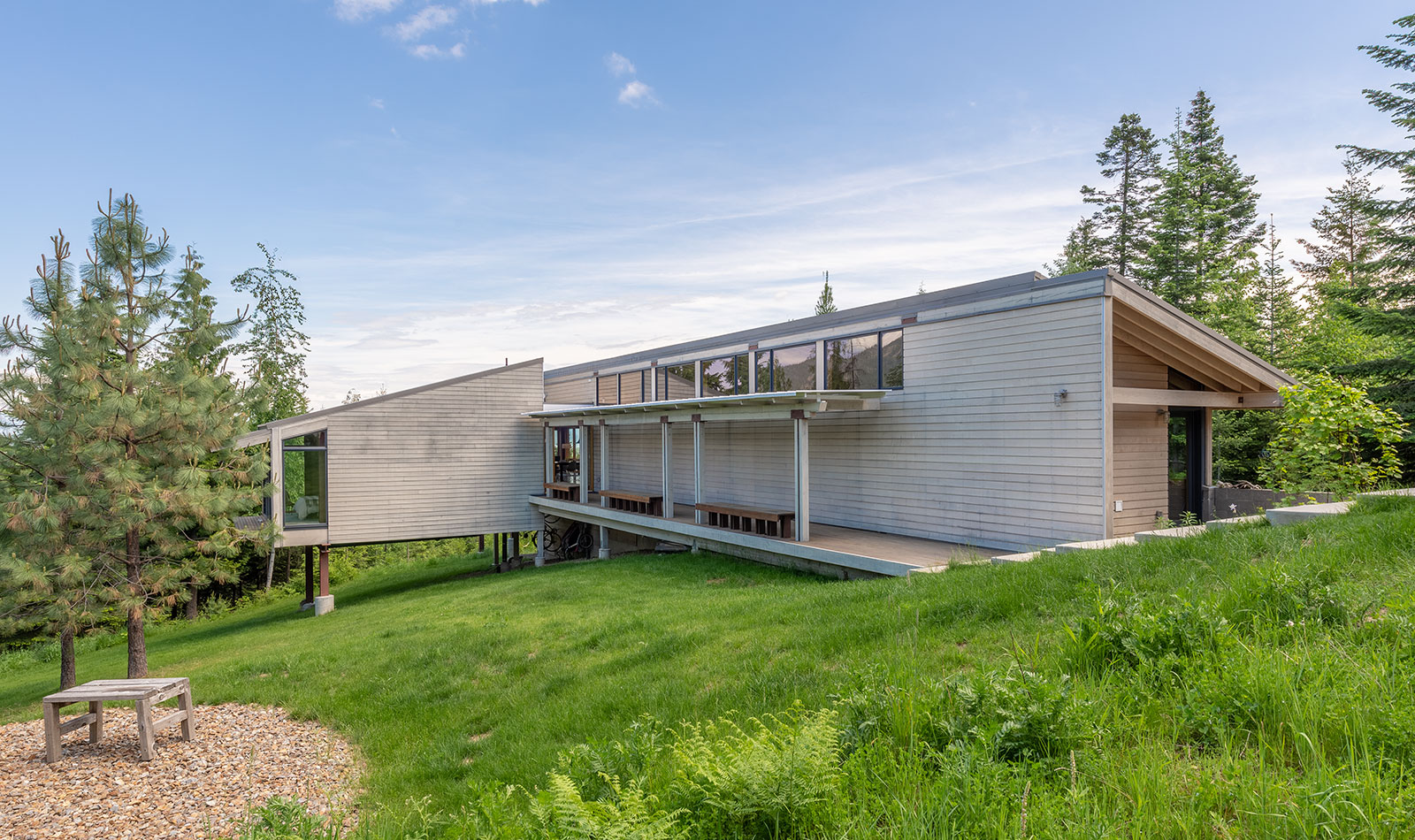 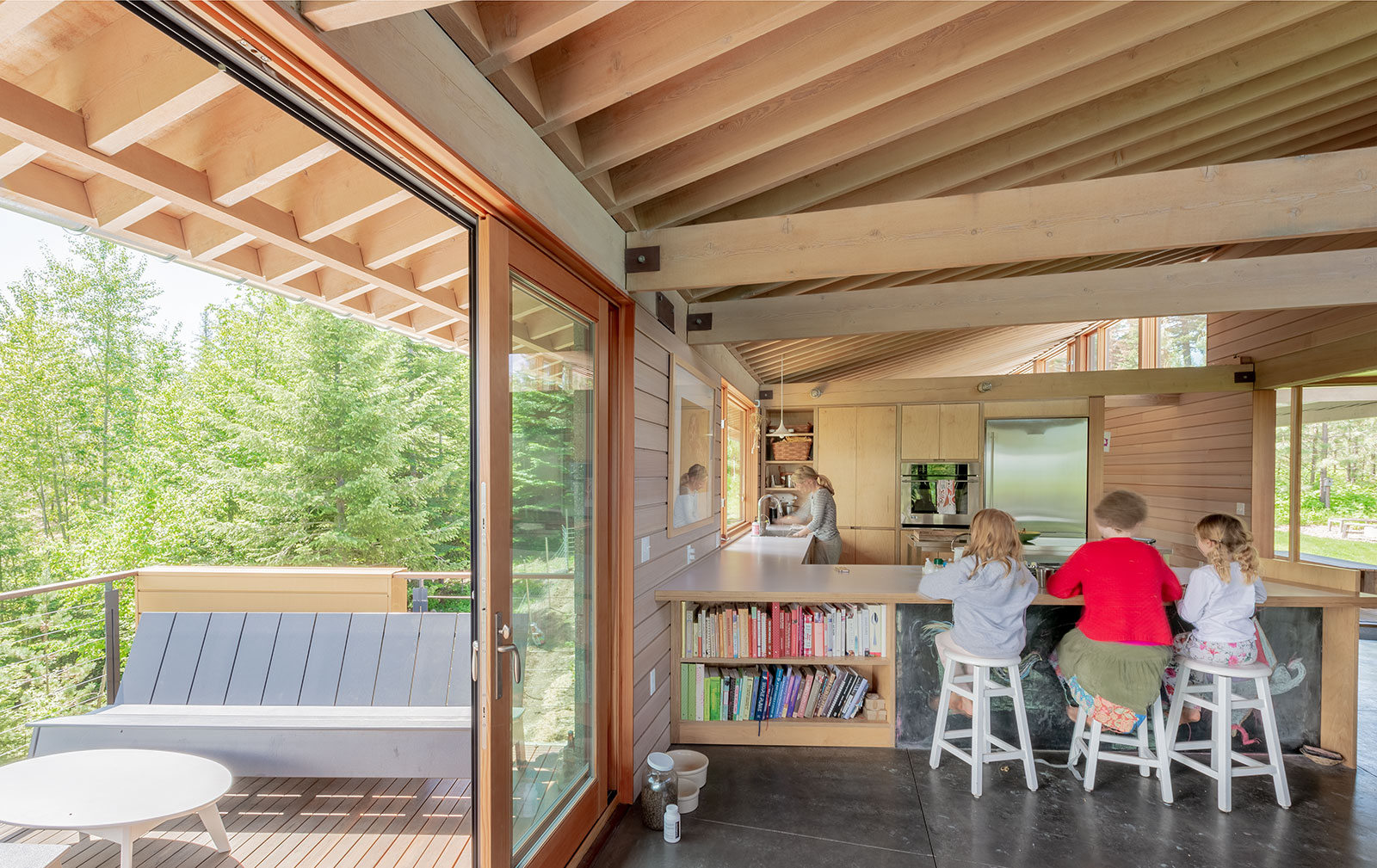 Larch House, Sandpoint Idaho
We love that the siting of this home allows it to touch the earth gracefully at the entry, while it’s carefully lifted above the grade at the common areas in order to capture daylight and views beyond. 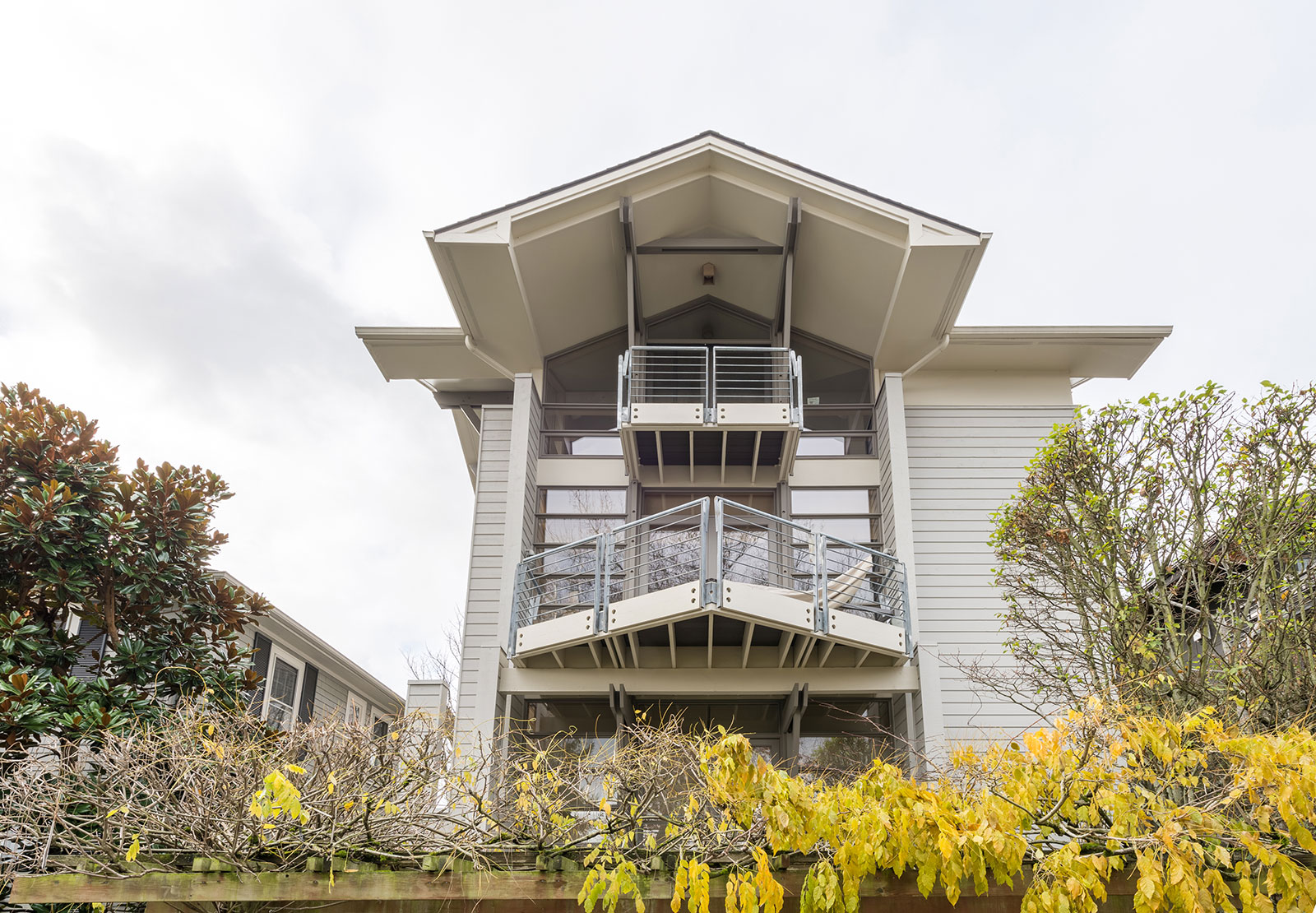 Jenson Meleliot House, Seattle
Tall and commanding, the symmetry is thrown off just enough to signal the work of a master architect. 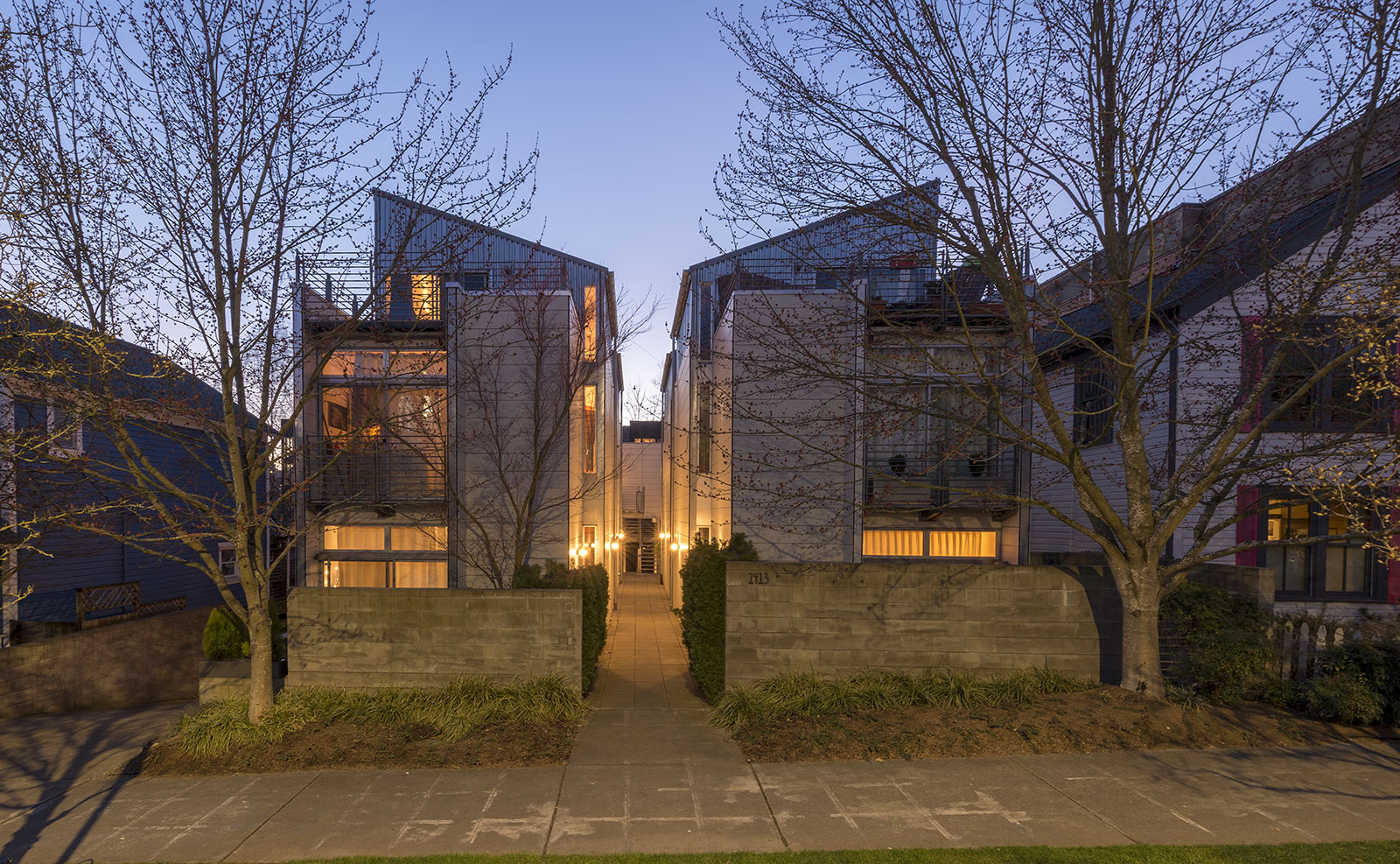 Nicholas Court, Seattle
This was the darnedest project to photograph. Like any good piece of architecture, the landscape was thoughtfully integrated and has since matured, blocking the head-on money shot of the façade. 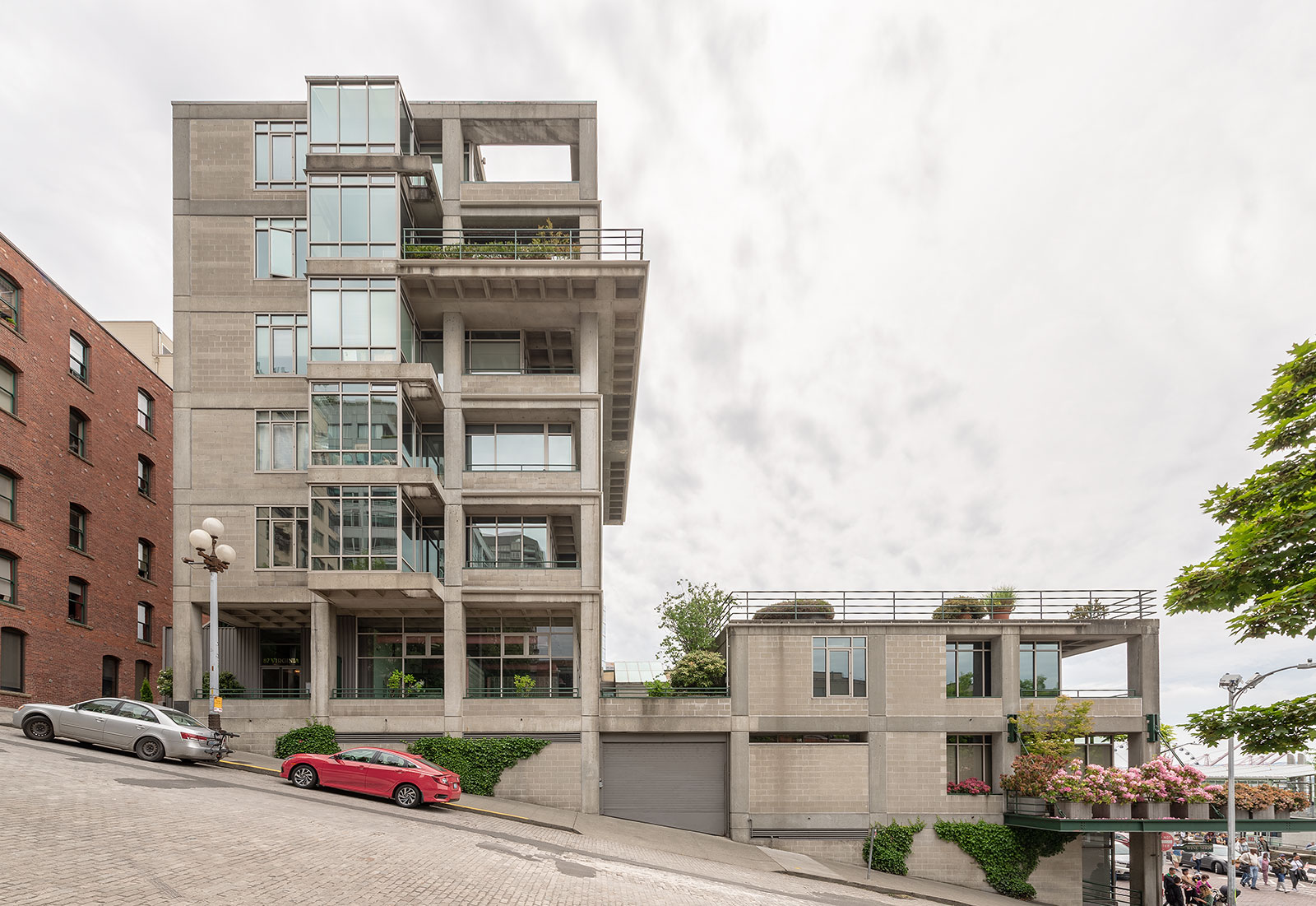 Pike & Virginia Building, Seattle
A modern classic and a favorite building among many architects in Seattle, the project is a reminder that modernism can be small, intricate, and sensitive to its surroundings. 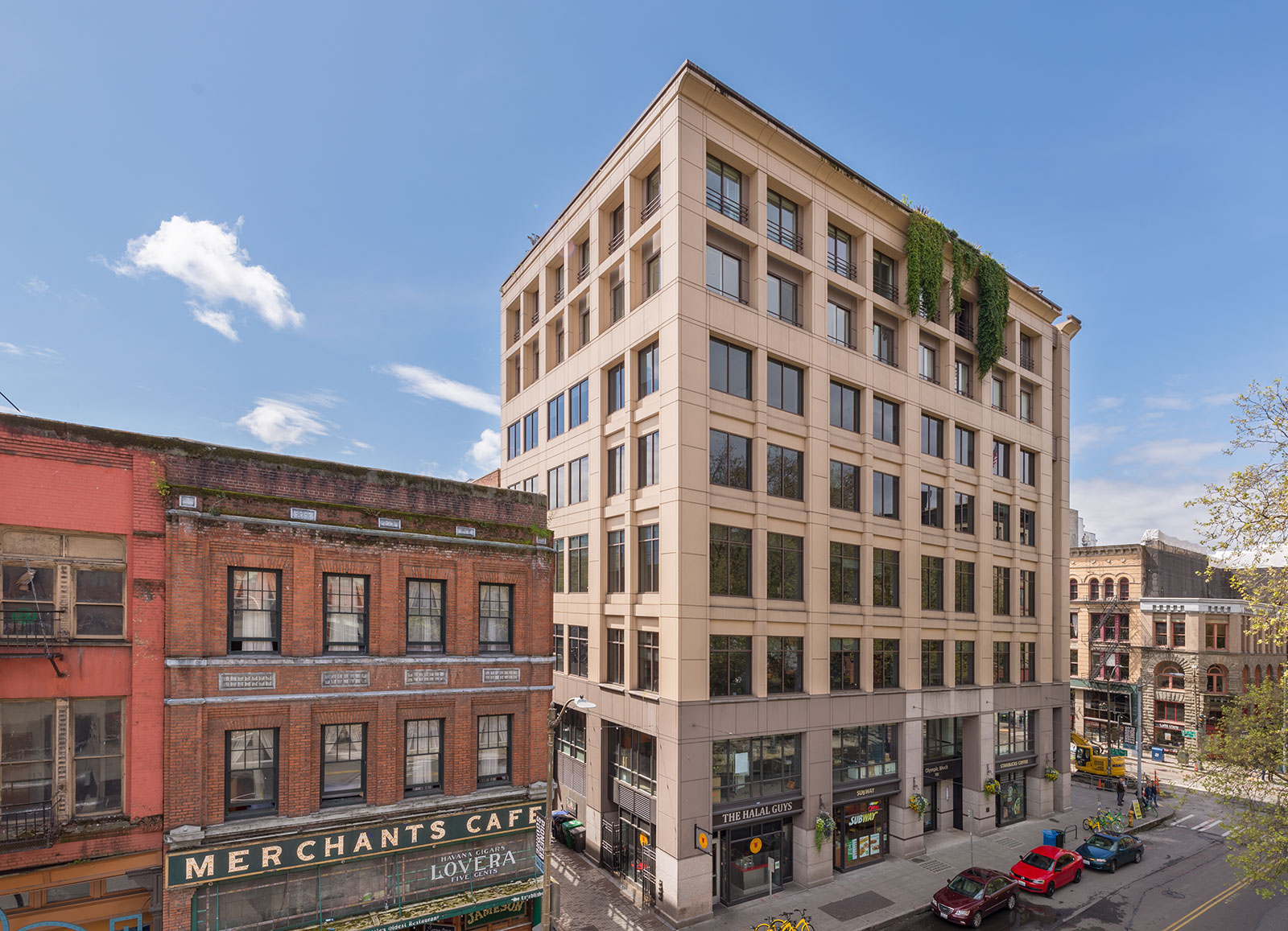 The Olympic Block, Seattle
An important puzzle piece to Seattle’s Pioneer Square, this building has always impressed us with how it quietly weaves into the surrounding historic context without hitting you over the head with modernism. 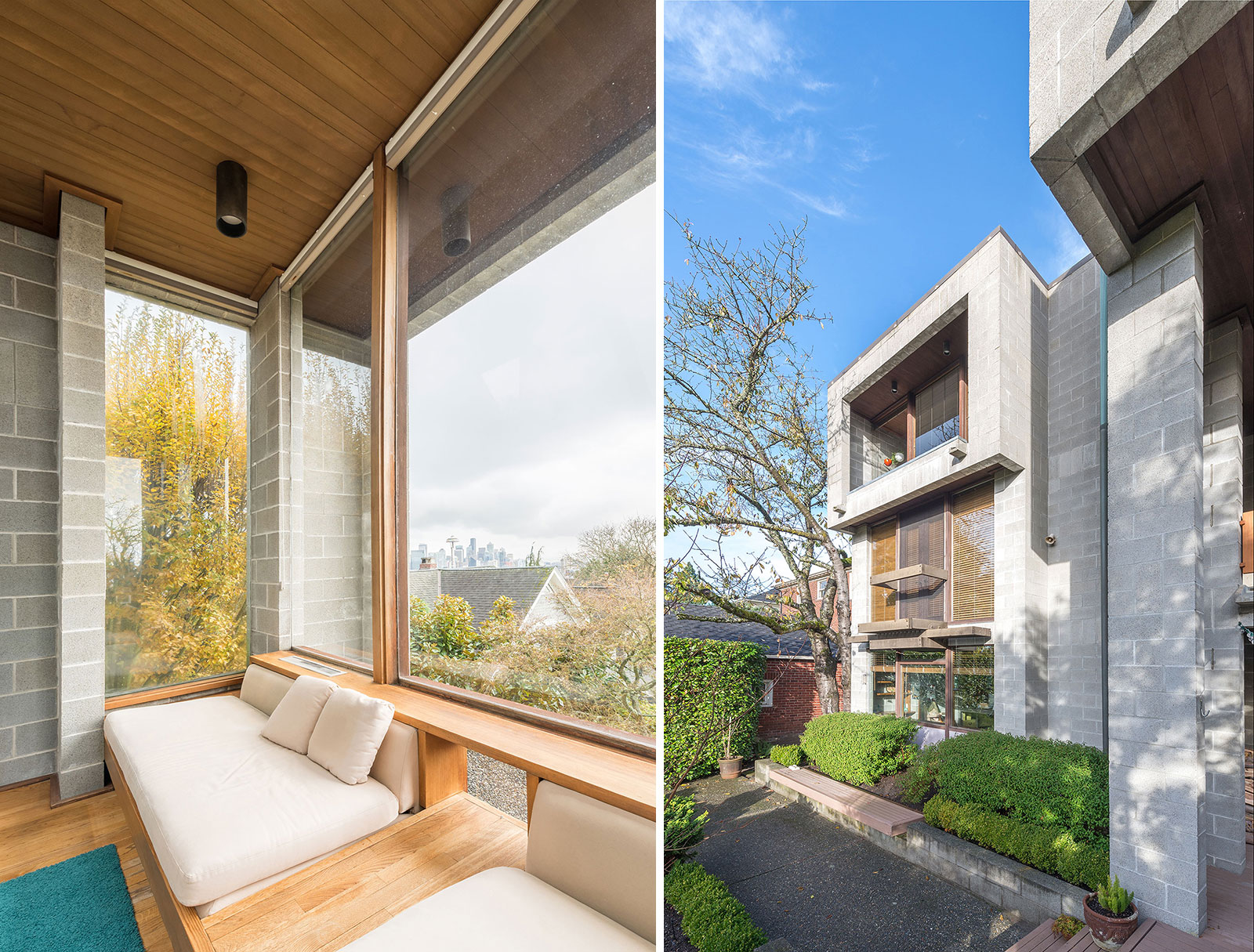 Raff House, Seattle
To say that this is an impressive first house from a young Gordon Walker, fresh out of undergraduate school, is an understatement. It is the product of someone who, from a very early age, understood the intricate relationship between designing and building (for the uninitiated, Gordon did both—designed this house and built it). 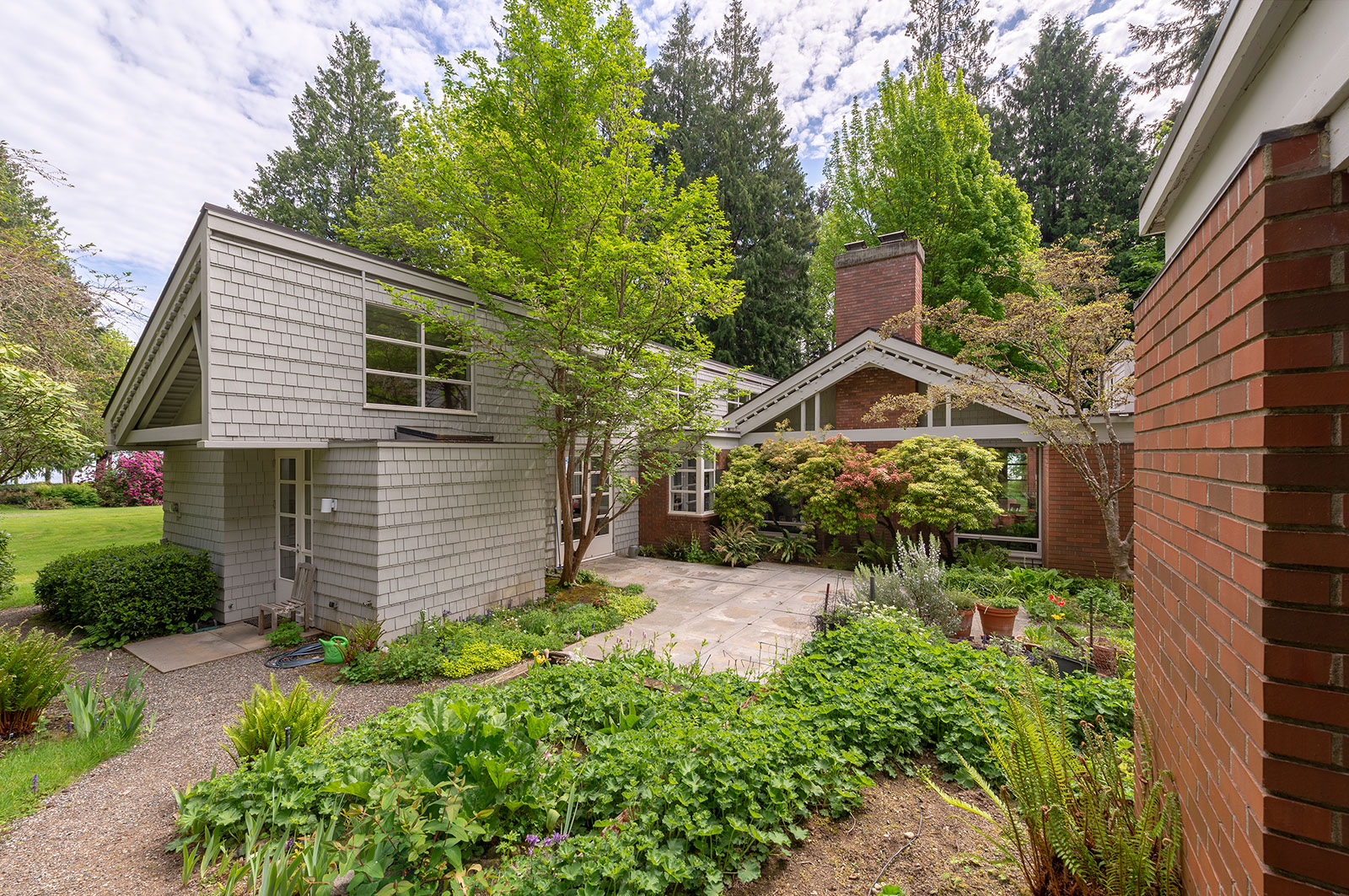 Raff House, Whidbey Island Washington
This house lets you into Gordon’s mind, as the architecture reveals his design and thought processes. The traditional gable roof is pulled apart to create new but still symmetrical forms, allowing for vaulted ceilings inside, and the insertion of courtyards outside. 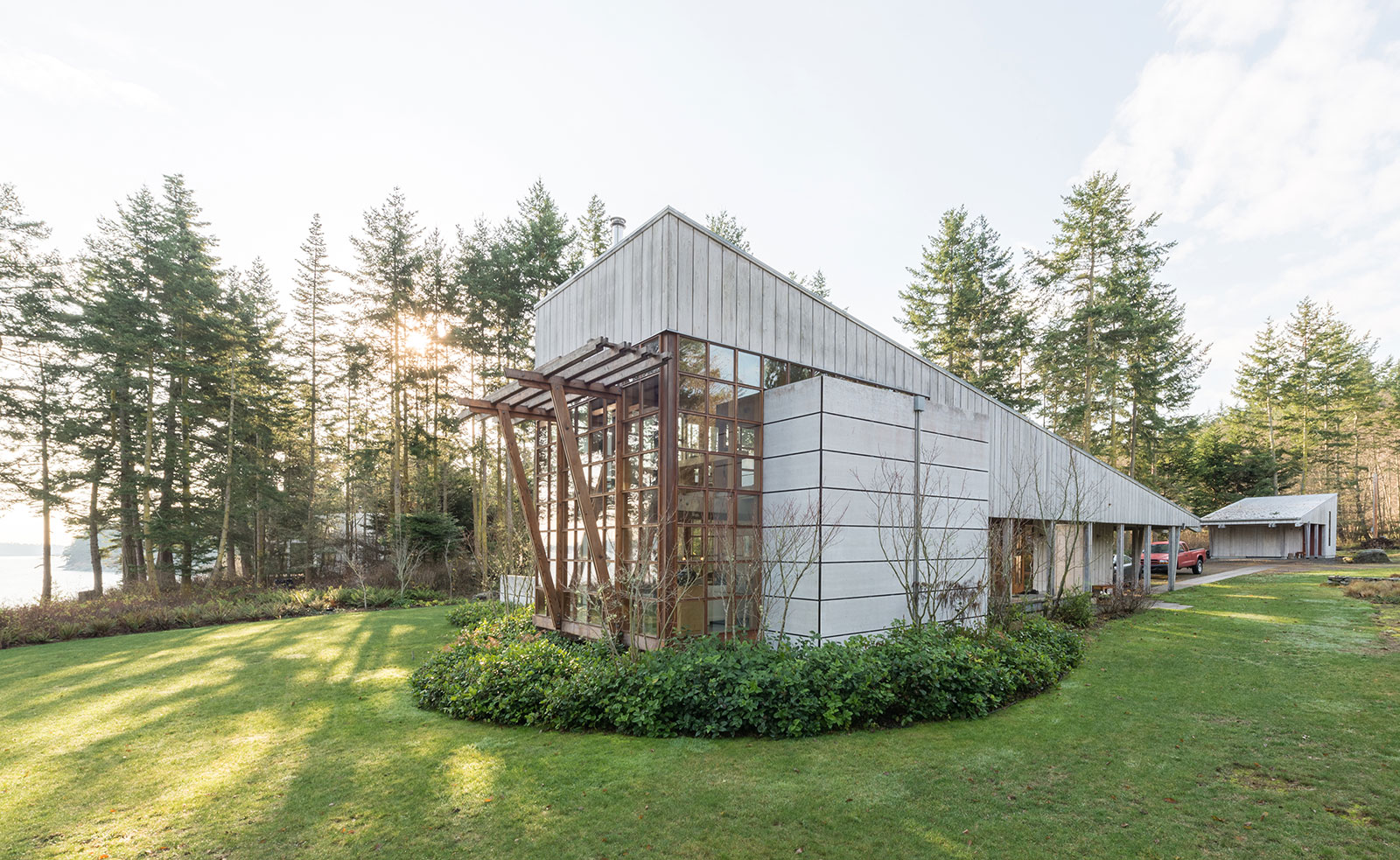 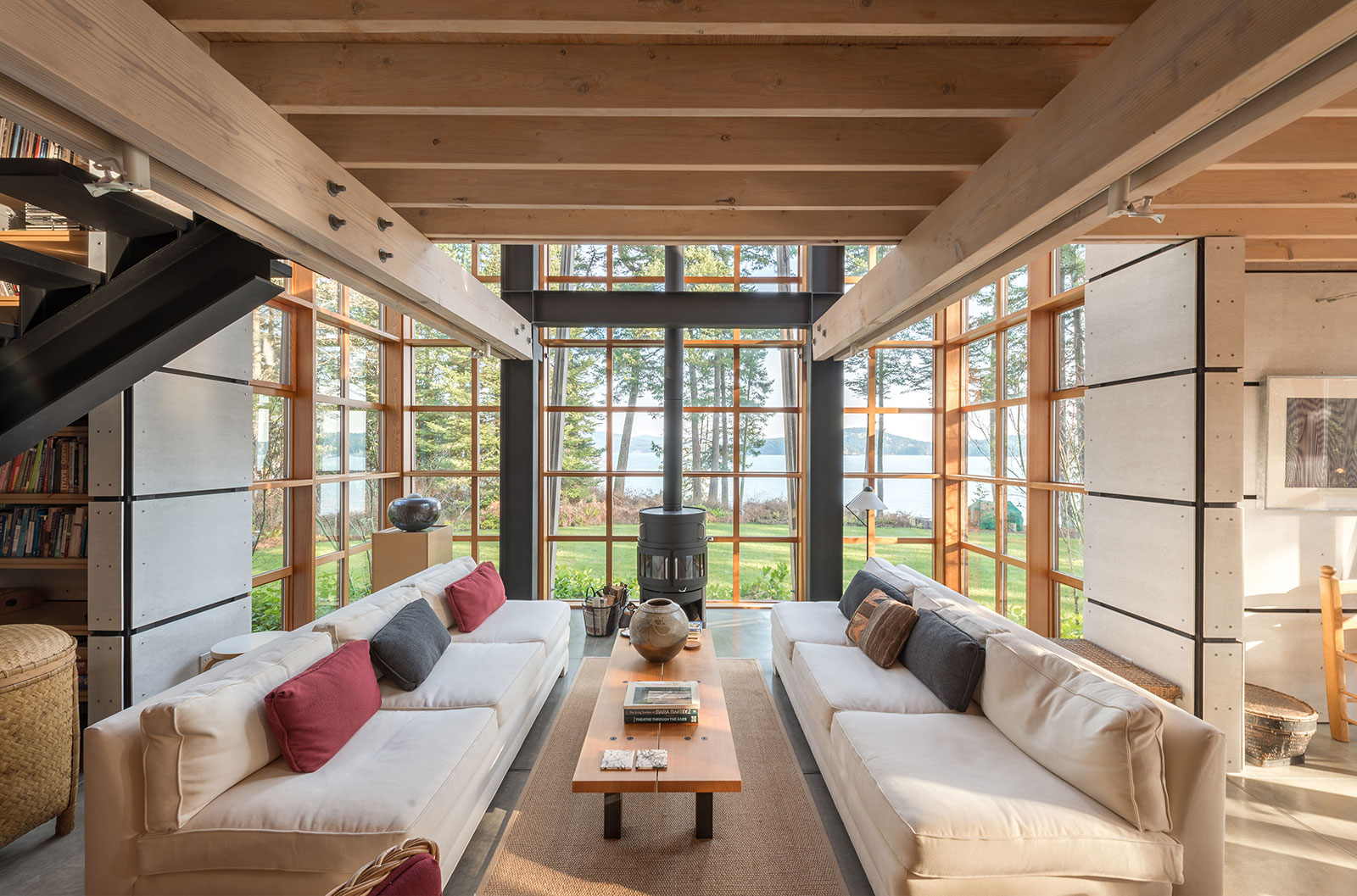 Rogers Cabin, Lopez Island Washington
A jewel box of a structure, the exterior detailing extends to interior functions and articulation; every piece of wood is exactly where it’s supposed to be. 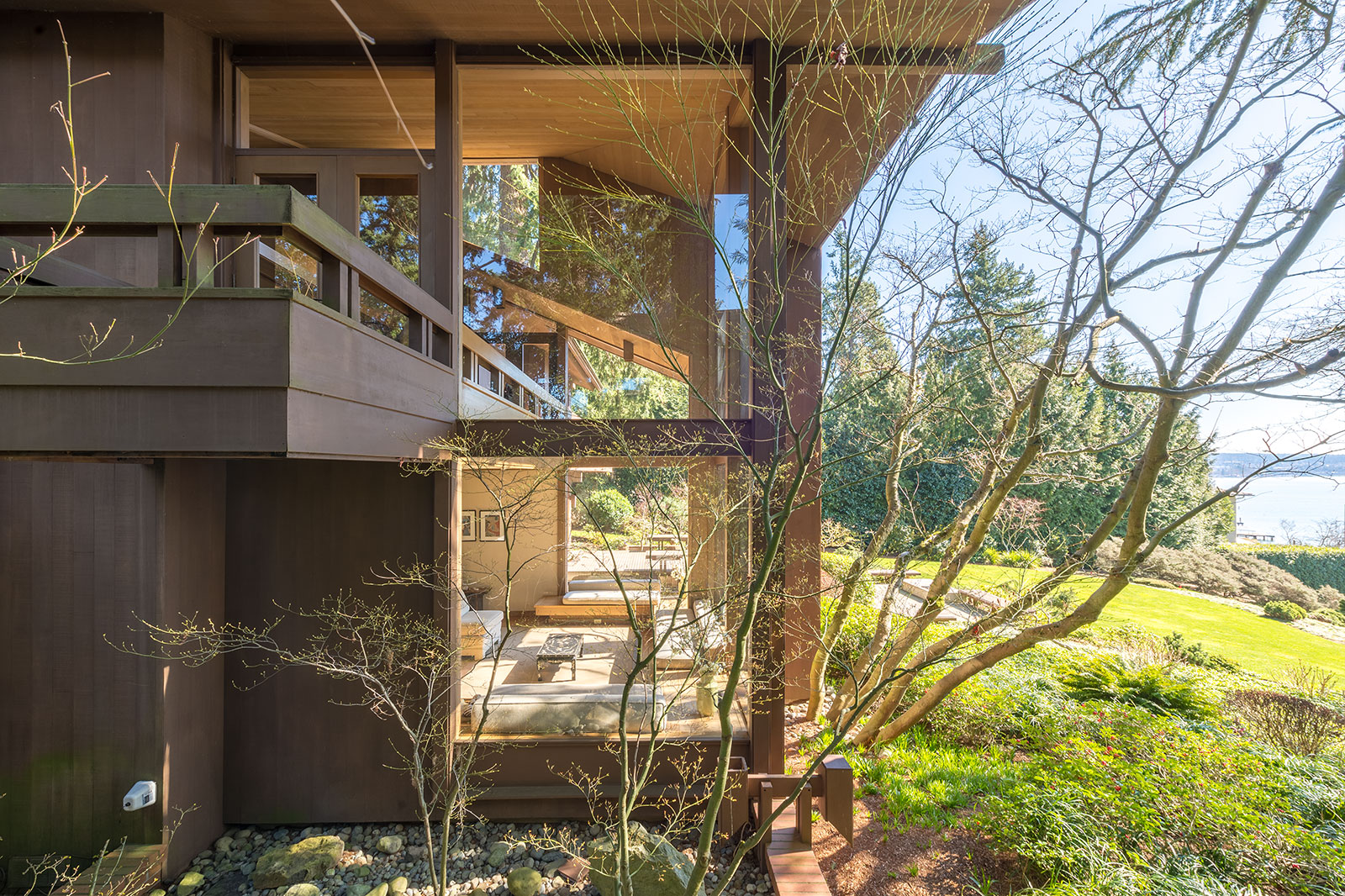 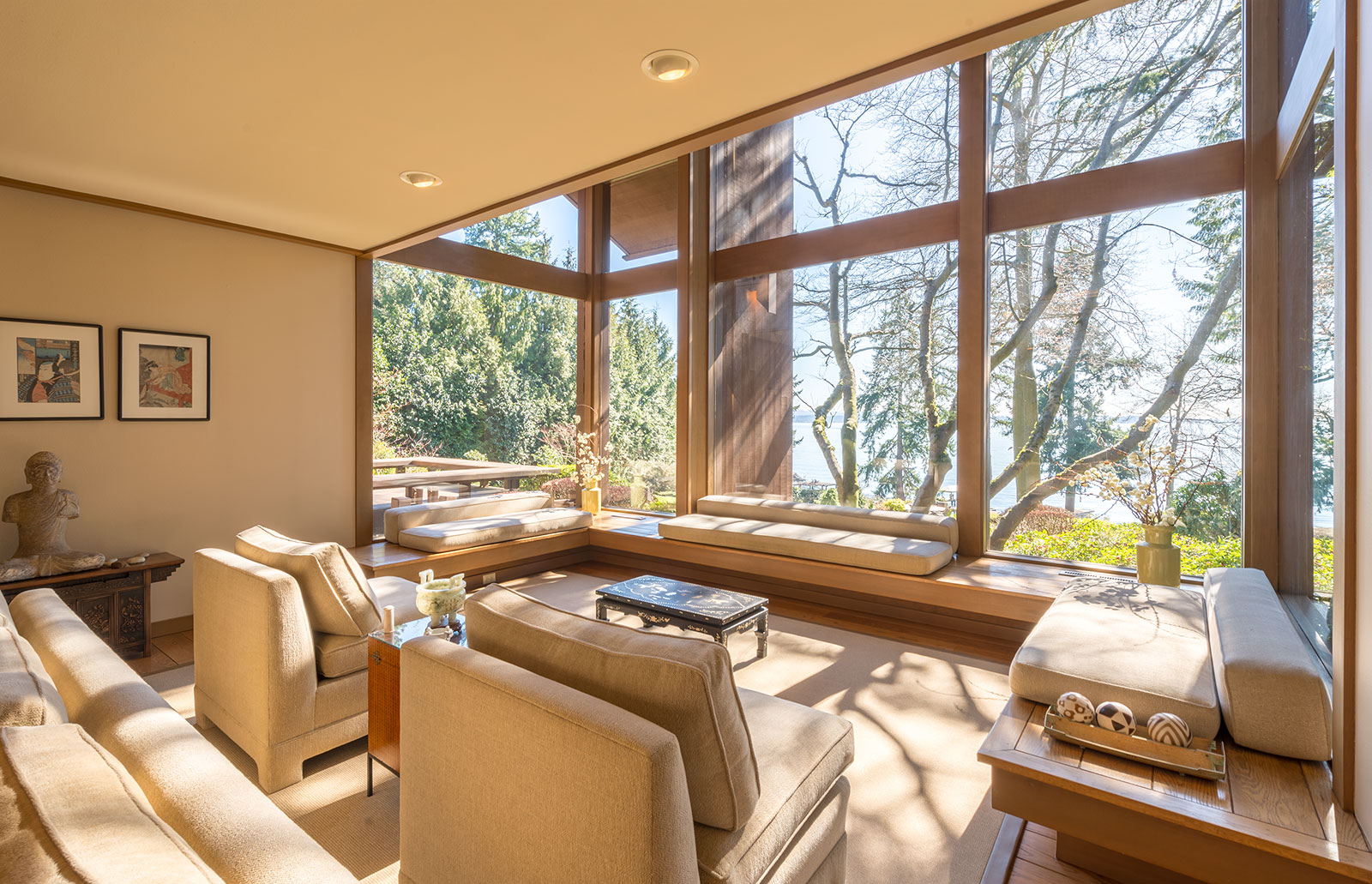 Rogers-Morris House, Kirkland
Unconventional and full of surprises, the roof line angles and bumps to produce interior spaces that are spacious and cozy. We especially like the highly transparent north wall of the double height living room. 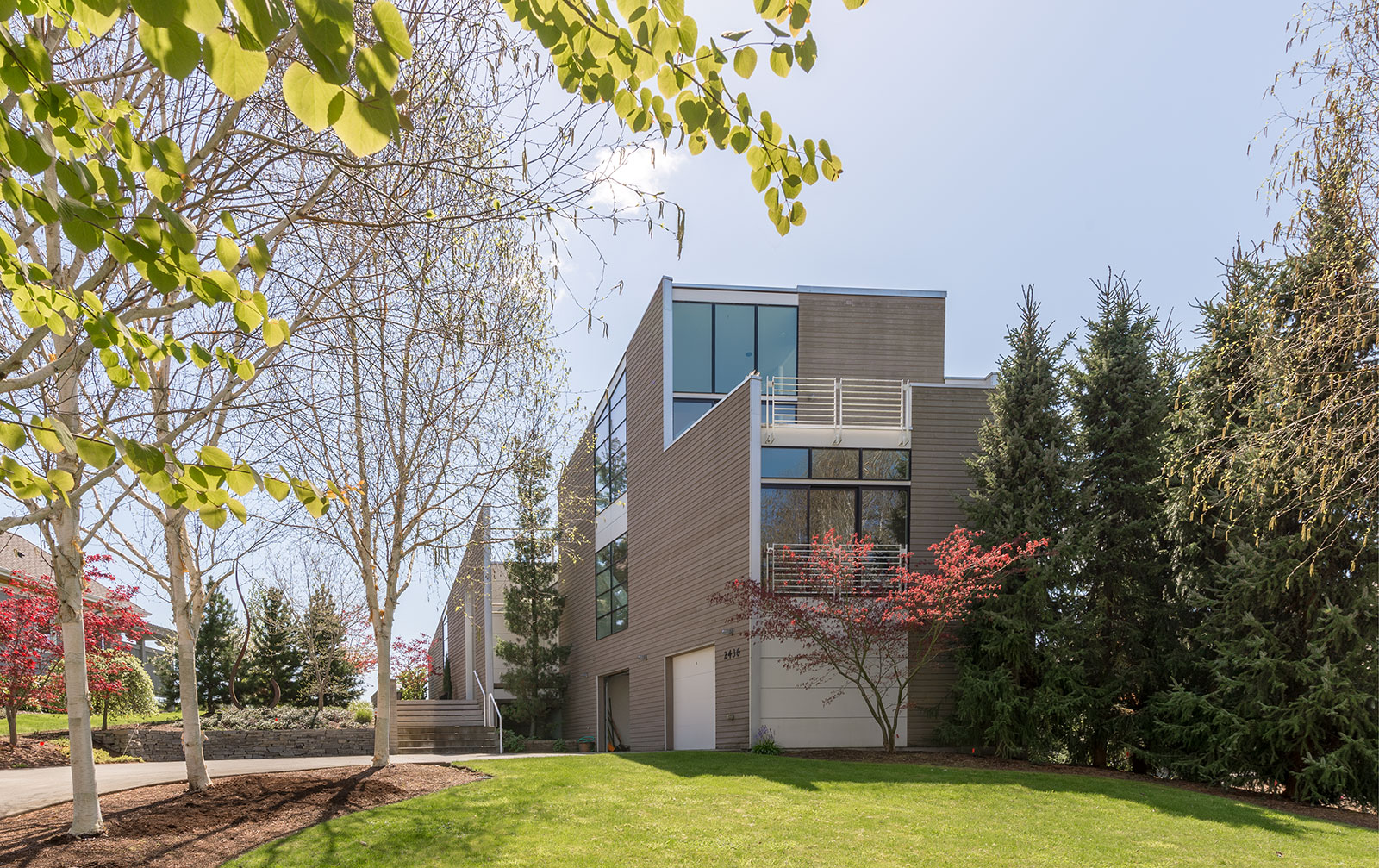 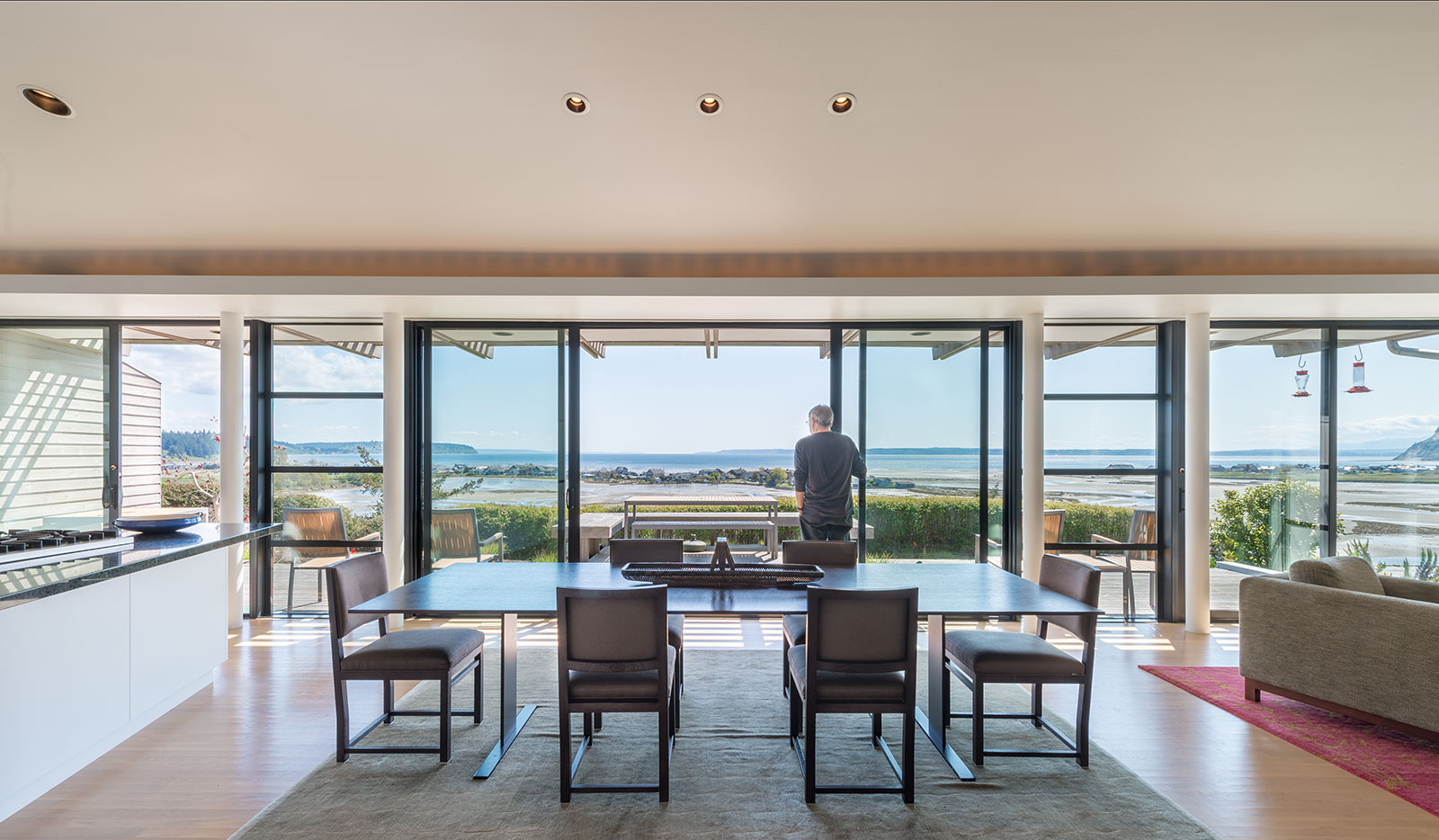 Stowell Russell House, Whidbey Island
Like a chameleon, this house presents appropriately from each perspective. At the west facing beach view, the house keeps to low, horizontal lines with walls of operable glass; at the east entry, it’s tall and skinny like an urban townhouse; and in between, a graceful architecture connects both facades. 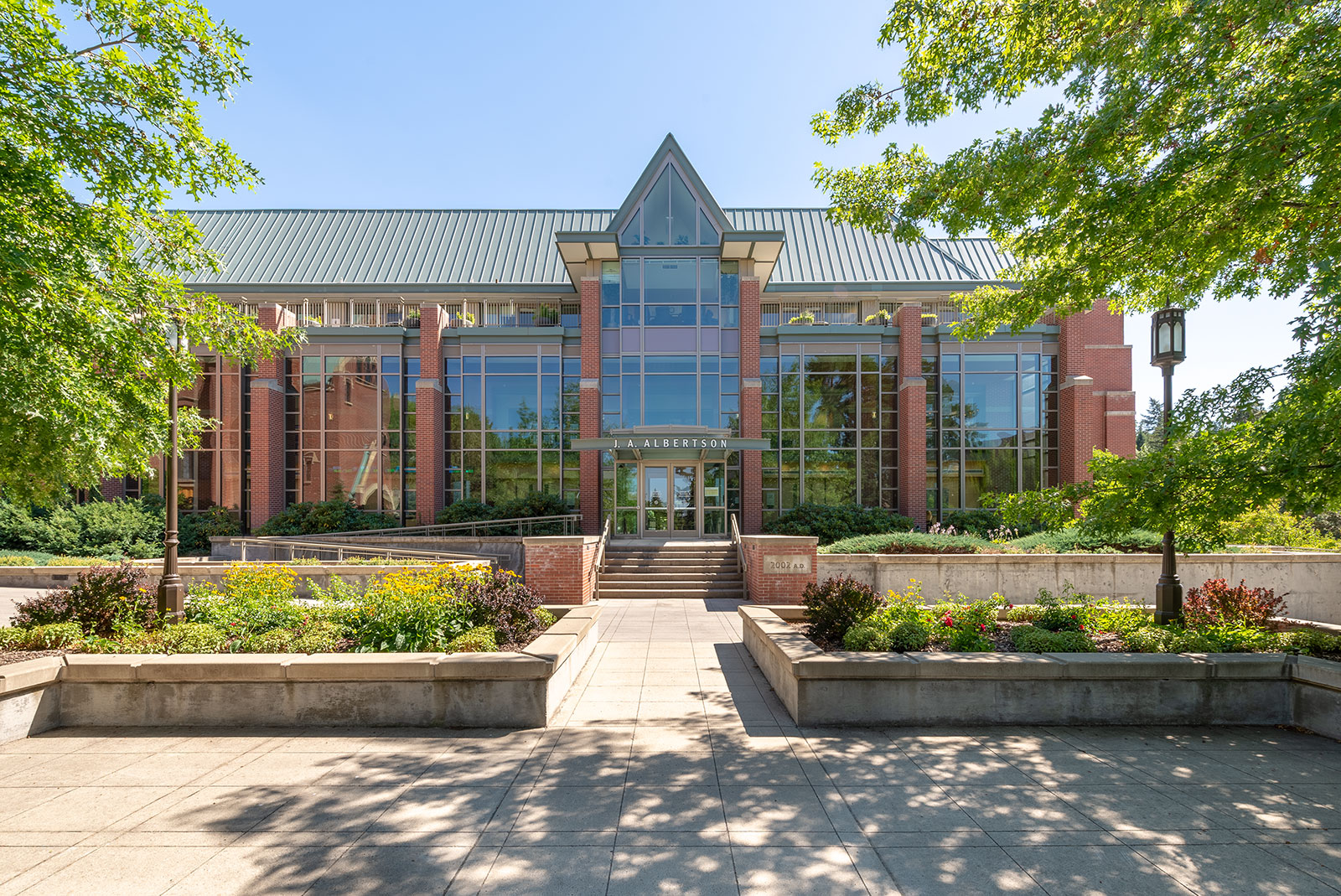 Albertson Hall, University of Idaho
The building, housing the college of business and economics, achieves a delicate balance between modern walls of glass and the academic nostalgia of brick and steep gable roofs. 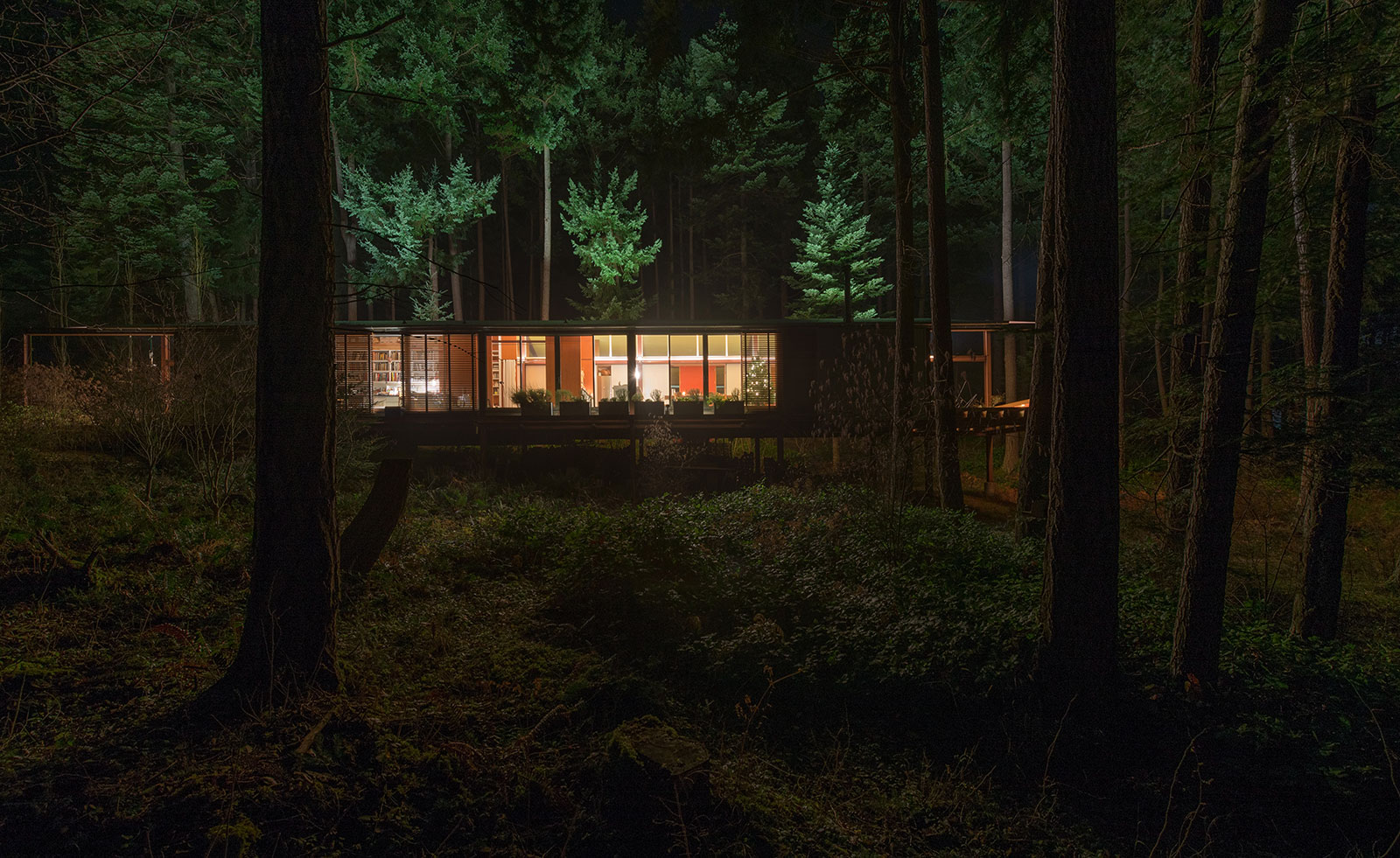 Orcas Cabin, Orcas Island Washington
Gordon’s own house, designed with his wife Sandie, is a master work demonstrating architectural detailing and design restraint. Our favorite view of the structure is just after dusk as it glows in the forest. 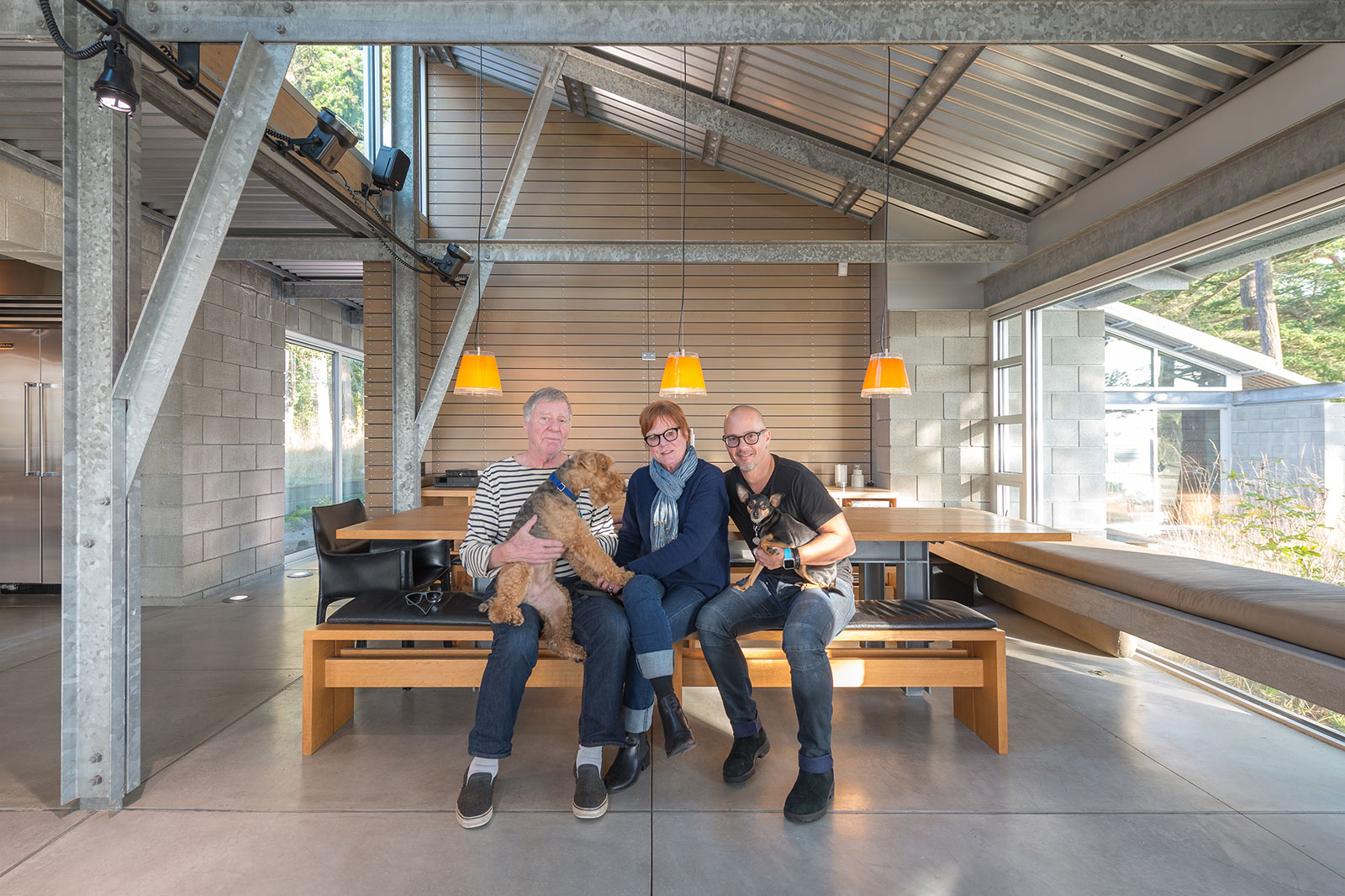 Gordon Walker with Jiggs, Sandie Pope, and Mike Conte with Bo.
We just love this photo, which was taken after the photo shoot at the Conte residence on Lopez Island, 2018.