Home 2016 September Projects That Give Back

Projects That Give Back 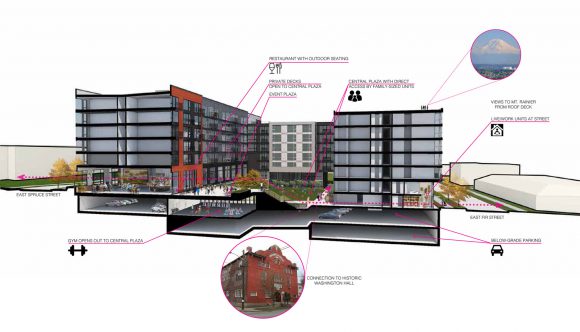 [Image by b9 architects]

If you’ve been following the BUILD Blog, you’re likely familiar with the First Central Station project that we are designing along with b9 architects. This mixed-use, multi-family project recently received unanimous approval from Seattle’s East Design Review Board, marking a significant milestone on our current pathway of having the overall project entitled (a term used to denote the eventual approvals by Land Use and Construction agencies). This is an opportune time to reveal some of our presentation and discuss the design philosophy that has helped this project receive community support. 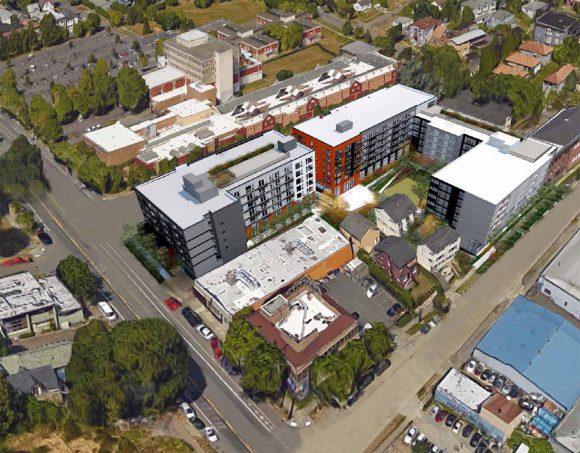 [Image by b9 architects]

First, a brief recap of the project and context. The site is located on a series of mostly vacant parcels at the corner of E. Spruce and 12th Ave in Seattle’s Central Area – just a walk away from Downtown, the International District, Seattle University, and Capitol Hill. Extensive research and mapping was performed on site which revealed a community rich in history and well-positioned for new possibilities. There are a number of zoning designations on the accumulated parcels, so a primary task of the design team has been a Contract Rezone process; we have taken the last 18 months to solicit community groups, receive their feedback, and ensure the project satisfies their concerns.

The proposed project includes three buildings containing apartments, restaurants, retail spaces and amenity spaces including plazas and rooftop terraces, all on a shared podium structure above underground parking. The master plan, created in conjunction with Weinstein A+U, allows for five separate public pathways into and through the site which provide access to a series of outdoor courts and plazas. With a substantial 26 foot change of topography across the site, from the NW to the SE corner, the exterior paths offer a sequence of experiences through the site while the plazas and courts lend to a variety of urban, family-friendly activities. 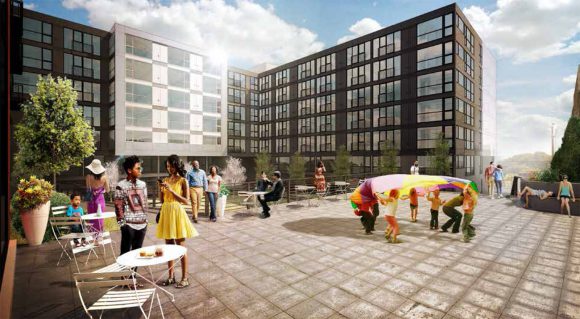 BUILD LLC and b9 Architects are collaborating on the three buildings to bring design diversity to the structures while the team at Karen Kiest Landscape Architects is designing the hardscapes, paths, courts and plazas of the site. Most notably within the masterplan is the 10,000 square foot Central Plaza. This publicly accessible, privately maintained space is lined with trees and screened with landscape around the perimeter to allow the ground floor family units a close relationship with the Central Plaza without sacrificing privacy. Overlooking the Central Plaza is the Event Plaza, a smaller hardscape that is positioned to allow outdoor seating for a café or restaurant, as well as a variety of cultural activities and artistic performances. At the streetscape, the buildings integrate the more public functions of restaurants, shops, cafes, and live-work units. Generous sidewalks allow for additional landscaping and additional outdoor space for the ground floor uses. Signage, wayfinding, and site-specific artwork are being designed by artist and musician Paul Rucker, whose role may also involve curation of the outdoor activities. 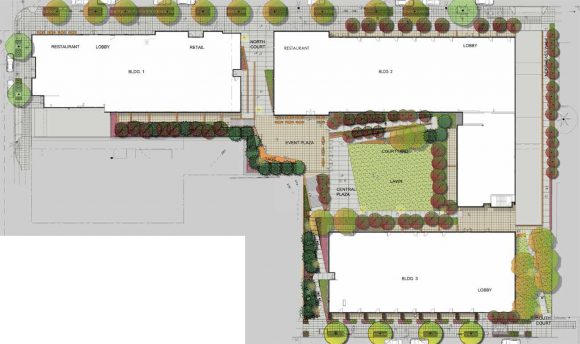 A thoughtful massing strategy provides appropriate setbacks to our adjacent neighbors, allowing for 21 to 30 foot landscaped buffer zones that are more generous than the minimum specified by land use codes. These buffers minimize the impacts on adjacent sites and allow the design team to create additional value for the future occupants and neighborhood with meandering paths, lush greenery, and circulation routes that become deliberate experiences. The image below illustrates the required setbacks in yellow with the proposed building in gray. 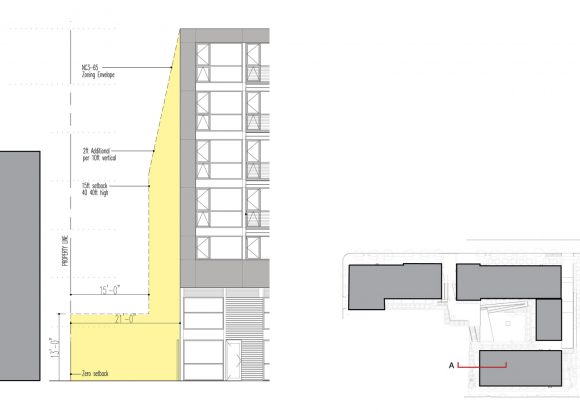 This has been a significant process to be part of simply because the entire project team and our community partners are thinking about the project not so much as three buildings, but rather as a comprehensive planning opportunity that should provide lasting value and benefit to occupants and neighbors. The project must pencil out to be a viable development, but care has also been given to ensuring that the proposed project maintains a broader design intent that can benefit the city, foster the neighborhood, and craft a thoughtful future. The structures, outdoor spaces, and paths are, of course, important, but they are simply building blocks to a much greater urban planning purpose. 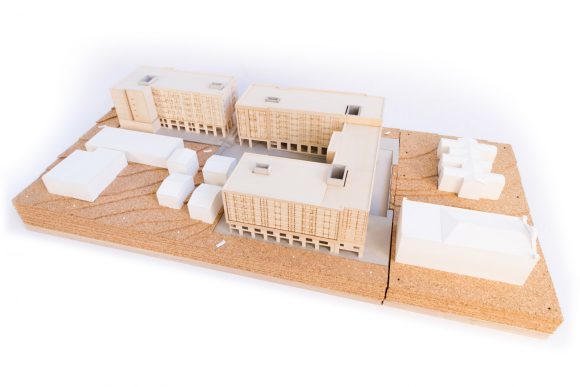 [Image and model by BUILD LLC]

Behind this greater urban planning purpose, there are some key design considerations that have been explored. In order to create a project that aspires to be noteworthy, the design team and community groups decided early in the process that respecting the history and character of this unique neighborhood were vital to the success of the development. Groups like the 12th Avenue Stewards, the Historic Central Area Arts and Cultural District (HCAACD), and Historic Seattle, to name just a few, were instrumental in distinguishing what is most important within the context of city and community. Here are five important drivers that have been addressed by the First Central team as the design unfolded. 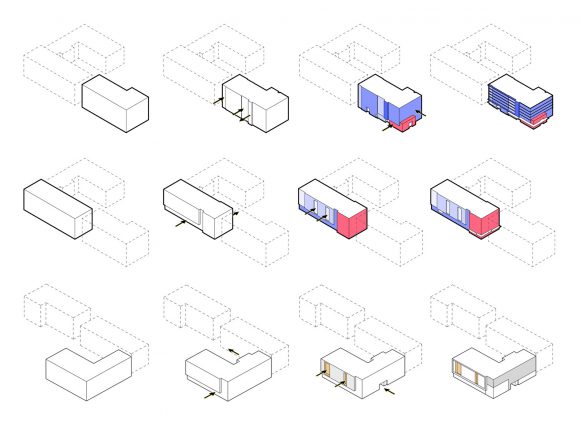 1. Highlight the History
Respecting and fostering Washington Hall to the east are at the top of the list. Built in 1908, the historic structure and community center actively hosts events, performances, and classes. It’s the centerpiece of the neighborhood and bookends our site. In addition to reinforcing the programs at Washington Hall, the First Central Station project offers its deference by neither copying or getting in the way of this historic neighbor. Building 3 (along E. Fir Street) takes geometrical queues from Washington Hall, using proportions derived directly from the Hall, while the new material palette allows the red brick of the traditional structure to remain the star of the show. 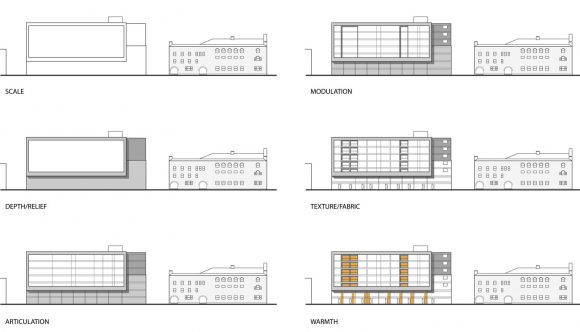 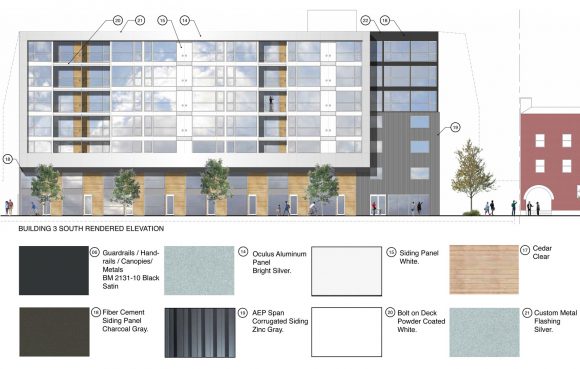 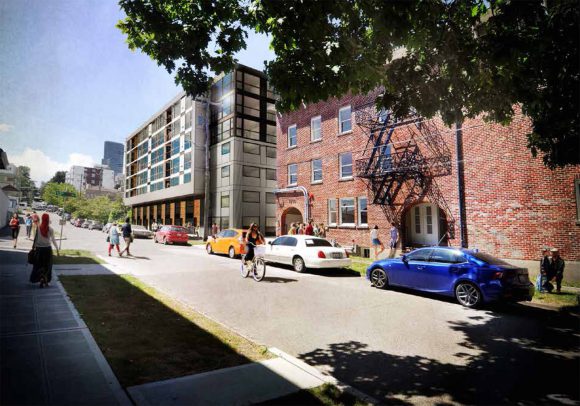 2. Reasonable Rents
In order to retain the culture and character of the current community, providing a mix of affordable housing was also essential. While officials are still in negotiations on how to best create affordable housing in a city witnessing record growth, our client committed to providing 77 affordable units total, while targeting 23 units at 60% average median income (AMI) and 54 averaging 75% AMI. Additionally, the project group is considering reduced lease rates at the ground-floor commercial spaces to foster local restaurants, cafes, and shops to activate the spaces and street life. We can’t emphasize this enough: the importance of helping smaller, locally owned businesses get established in developments like First Central Station, and orchestrating this relationship, is just as important as drawing attractive buildings. 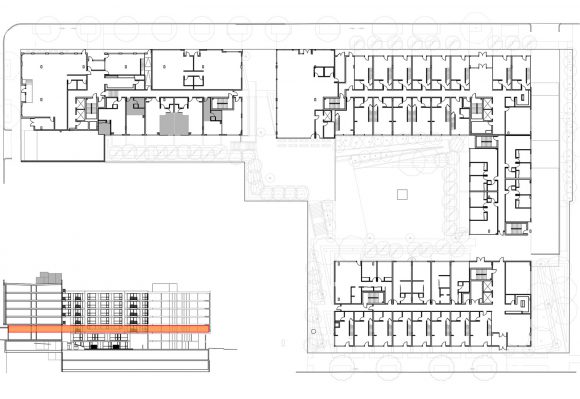 3. Let the City In
Because of the size of the First Central Station site, the opportunities for publicly accessible space were in the discussion from the very first design meeting. While we looked at dozens of master plan schemes, the Central Plaza at the heart of the project became a key driver to the success of the overall master plan. The publicly accessible, privately maintained open space provides play opportunities for the neighborhood, a safe space for families, and daylight and fresh air for the buildings. In our preliminary review, we could have placed slightly more housing on the site, but it was obvious that the quality of the housing units and years of leasing apartments would benefit from the light and view provided by the final plaza design. And to compliment the dynamic park created by the Central Plaza, the upper Event Plaza has the minds of the design team spinning with possibilities. 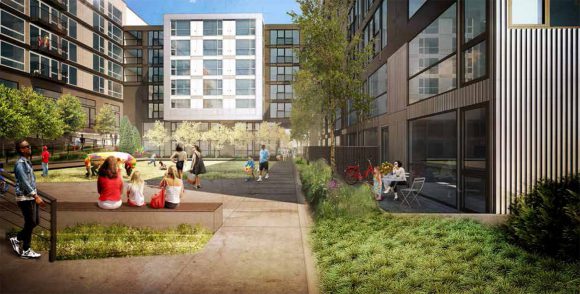 4. Activation Day and Night
In an urban area, activation of the site is key. The aim of a project like First Central Station is to bring in restaurants, cafes, shops, and live-work establishments that keep the sidewalks and storefronts activated and busy throughout all hours of the day and well into the evening. Ideally, a café would activate the pedestrian zone in the morning; the restaurants, shops, and plazas spaces would populate the site from noon to midday; then, a dinner venue and the Event Plaza would bring life and activity in evening hours. This goal will be a curated focus moving forward with the project planning. With eyes on the street, sidewalk and outdoor spaces are also crucial components for community safety, and by nature of the residential units lining all sides of the buildings, this has been built into the project. Recessed and protruding decks also allow residents to engage with the outside and further reinforce safety. 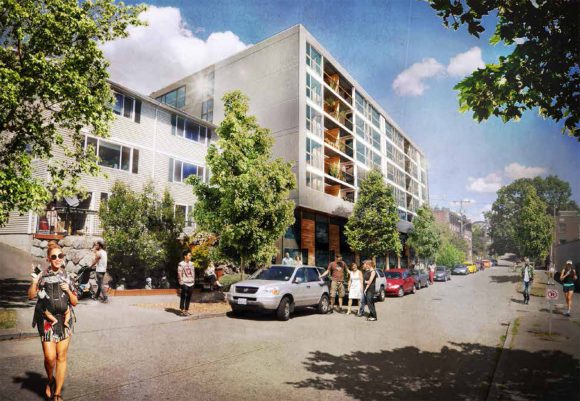 5. Conceal the Cars
Another top priority was providing parking for an already congested city, while taking care to accommodate the parking needs of the project without adding more unsightly surface parking lots or burdening our neighbors with more pressure on existing street parking. Two discrete parking garage entrances provide access to 285 parking stalls which serve both the housing and the commercial uses. Tucking the parking underground hasn’t been an easy feat within the shallow groundwater on this site, so great care was taken to create multiple levels of parking in as shallow and affordable a manner as possible. Concealing the cars and promoting safe pedestrian experiences are, once again, a valuable urban planning decision balanced with significant physical constraints.

Seattle, like many urban environments experiencing a population (and subsequent construction) boom, is at an important crossroads as a city. The decisions that architects, landscape architects, urban planners, designers, reviewers, and government representatives are currently making will significantly shape Seattle in the decades to come. While a building boom implies tight deadlines and a swift cadence, it’s crucial that our design and planning decisions remain thoughtful and deliberate. It’s important that the urban developments on the boards now and in the near future take on a civic role by providing clear and lasting community benefits. Rapid growth like this comes once every 50 years; we may not have another chance to get it right in our lifetimes. 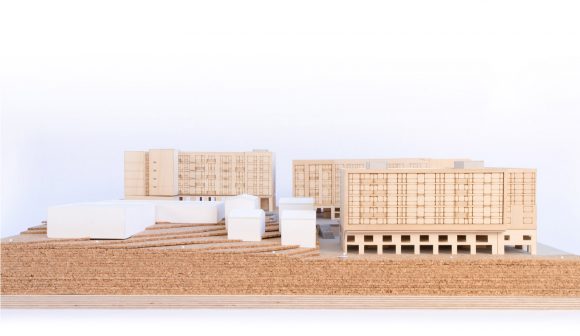 [Image and model by BUILD LLC]