The Importance of Urban Mapping: A Site Study at First Central Station 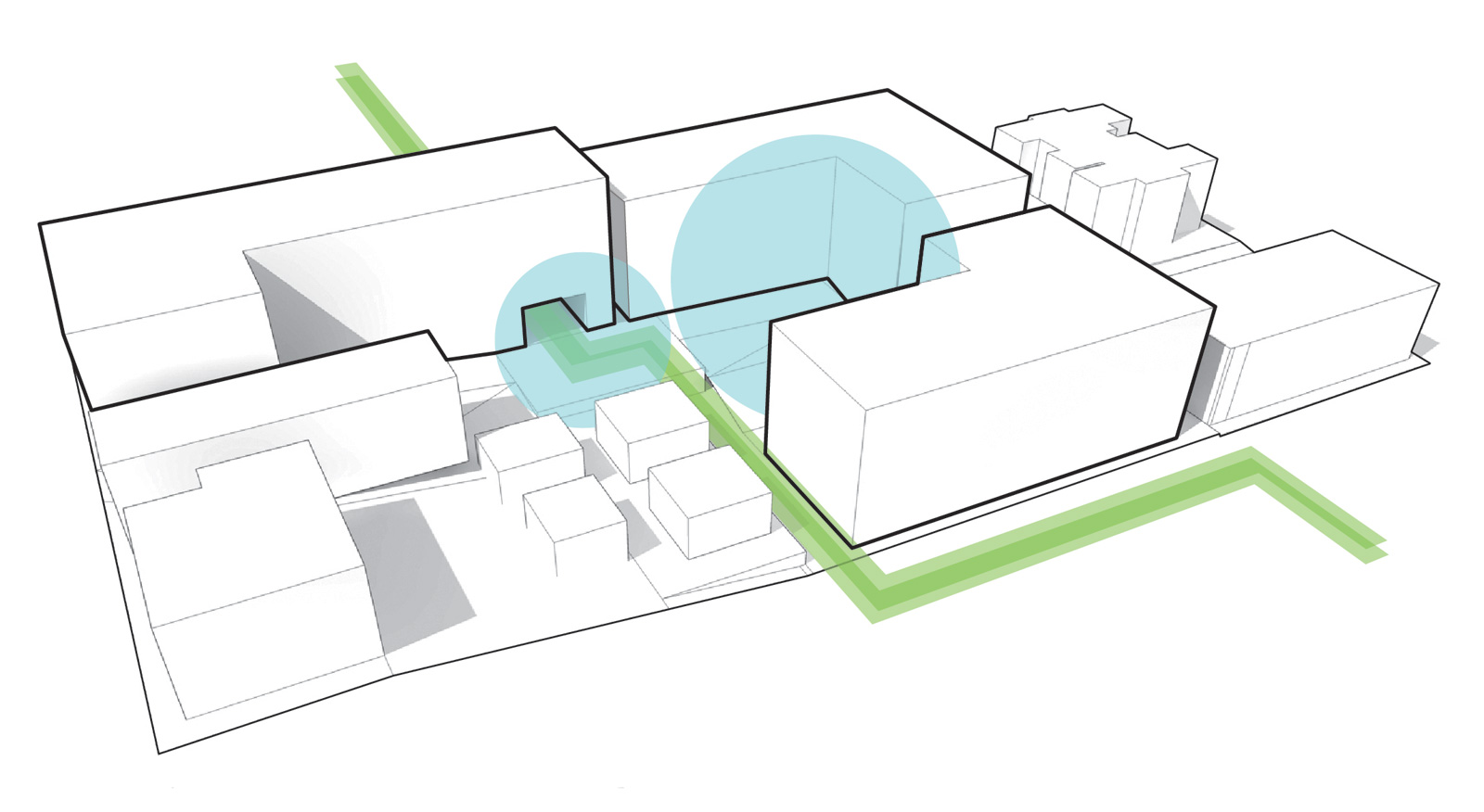 [All Diagrams by BUILD LLC]

For the last couple of months, we’ve been working away on the pre-design for a notable project in Seattle. The neighborhood is particularly interesting, the site spans more than a city block (much of which is vacant), and the design team includes three separate architectural firms: B9 Architects, Weinstein A+U, and BUILD LLC. The project programming will be mixed-use in nature and aims to activate the community with park space, housing, restaurants, and retail spaces – all while providing nearly 400 new apartment homes. In a nutshell, it’s exactly the type of situation we love wrapping our minds around. It allows us the opportunity to explore the details of an urban neighborhood, put our diagramming skills to good use, and propose some purposeful design possibilities. It’s also gives us the chance to work with some exceptional architects and community groups.

The First Central Station project sits between East Fir and East Spruce Streets and between 12th and 14th Avenues, just south of Seattle University. Considered part of Squire Park, the site sits on the southern border of Capitol Hill and just a stone’s throw from the International District. Because the project will play an important role in the urban fabric of Seattle, an in-depth study of the area is critical. While the information gathering phase of the project is ongoing, the team has produced a set of visual mappings that inform the design process. We think of these mappings as filters – by viewing the neighborhood through a particular filter, certain characteristics and features become pronounced. While there are an infinite number of filters to apply to a city, our focus was on the six described below. Along with each diagram, we’ve listed some of the surprises and paradigm shifts as a result of the study. These factors help clarify the significance of the neighborhood and inform the eventual design of the upcoming First Central Station development.

Before we dive into the diagrams, there are a few parameters worth mentioning with regard to the study. The left side of each diagram typically encompasses a regional mapping or a variation. For instance, it’s important to show a larger, regional view for a diagram like the transit mapping. The diagram on the right is a local mapping which includes a 3 block radius around the site. We noticed after about 3 blocks in any given direction there is an urban boundary where the conditions change dramatically. These diagrams are also a work in progress; as we speak with community groups and gain additional insights into the neighborhood, the depth of information increases.

HISTORY MAPPINGS
The historical public transportation lines in Seattle are fascinating and this particular neighborhood was an intersection of several lines. In a city that is currently struggling to establish light rail lines, it’s always a shock to re-discover that they were already here at one point, then demolished. Also of particular note – the Yesler Cable Car which carried passengers east, along a massive wood trestle to then meet the boats that would ferry them across Lake Washington. 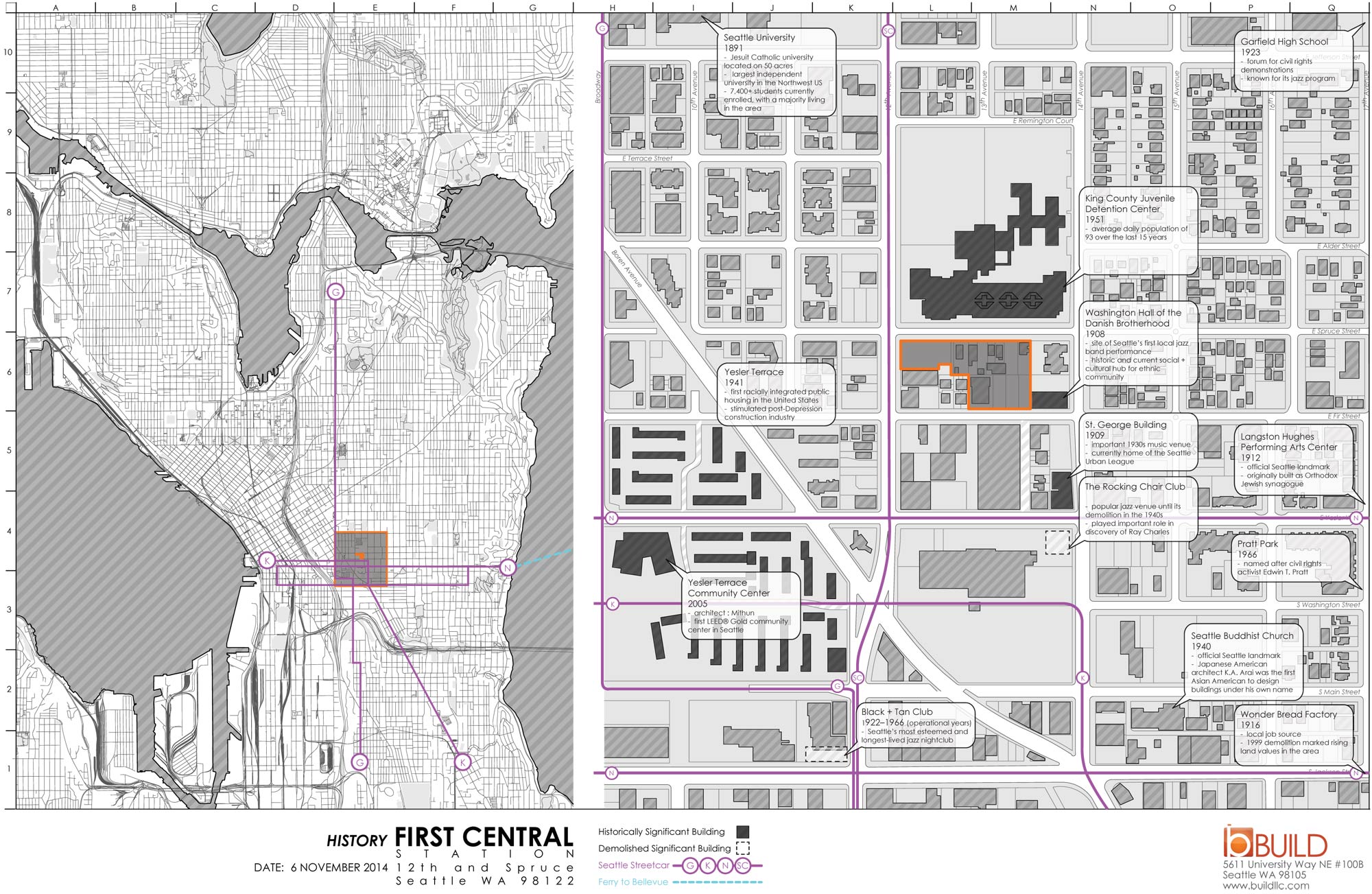 The neighborhood was also home to a handful of well recognized jazz clubs in the 1920’s through the 1960’s. The Rocking Chair Club, for instance, played in important role in the career of Ray Charles. Washington Hall also hosted decades of important jazz performances and continues to act as the cultural centerpiece of the neighborhood. 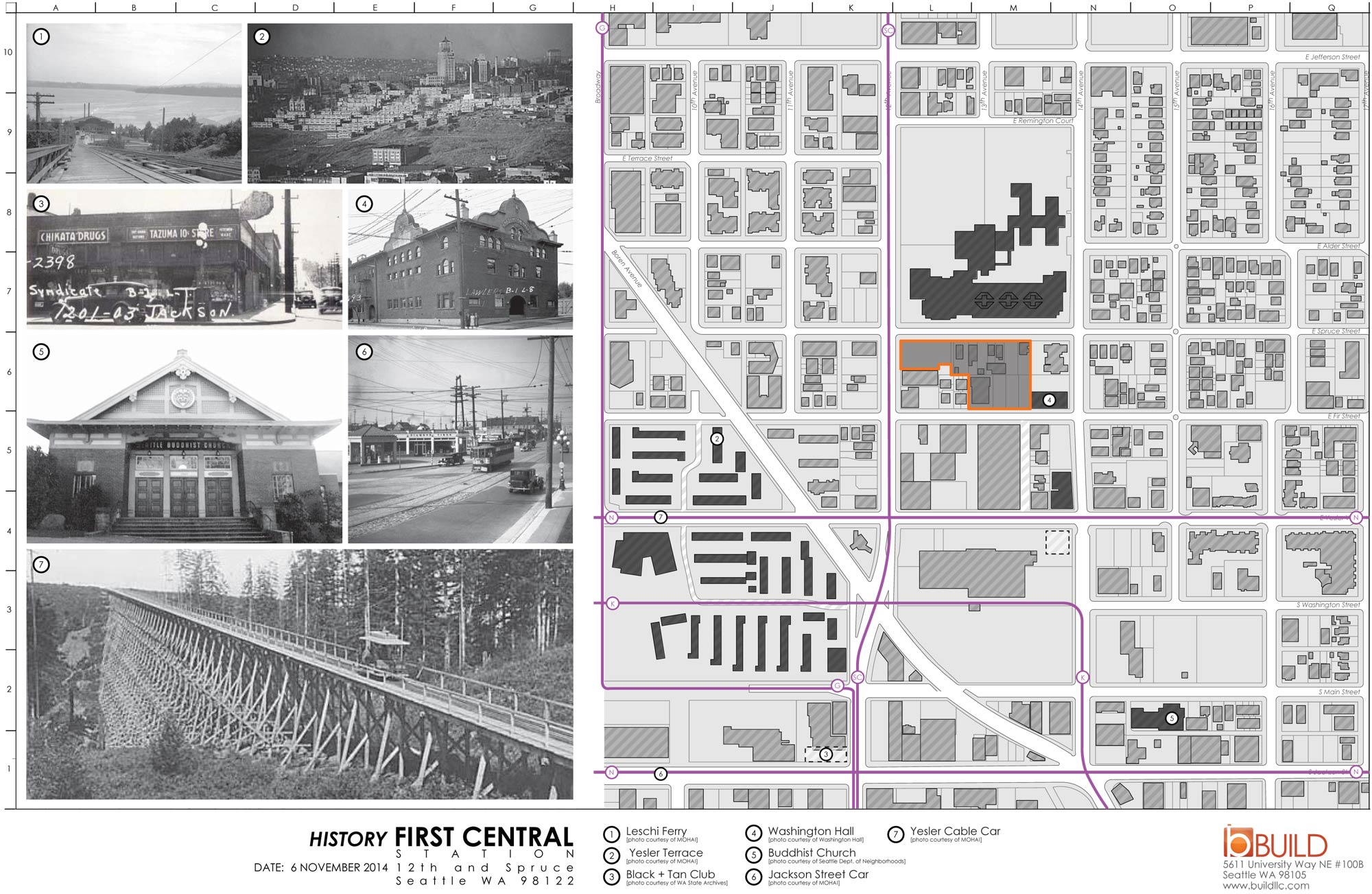 URBAN VILLAGES & FIGURE-GROUND
The urban village study (on the left) illustrates that the neighborhood is flanked by urban villages on 3 sides – these are neighborhoods that have their own distinct characters and, in some cases, special zoning codes. This signals to us that the community has the potential to have a great amount of vitality and diversity. 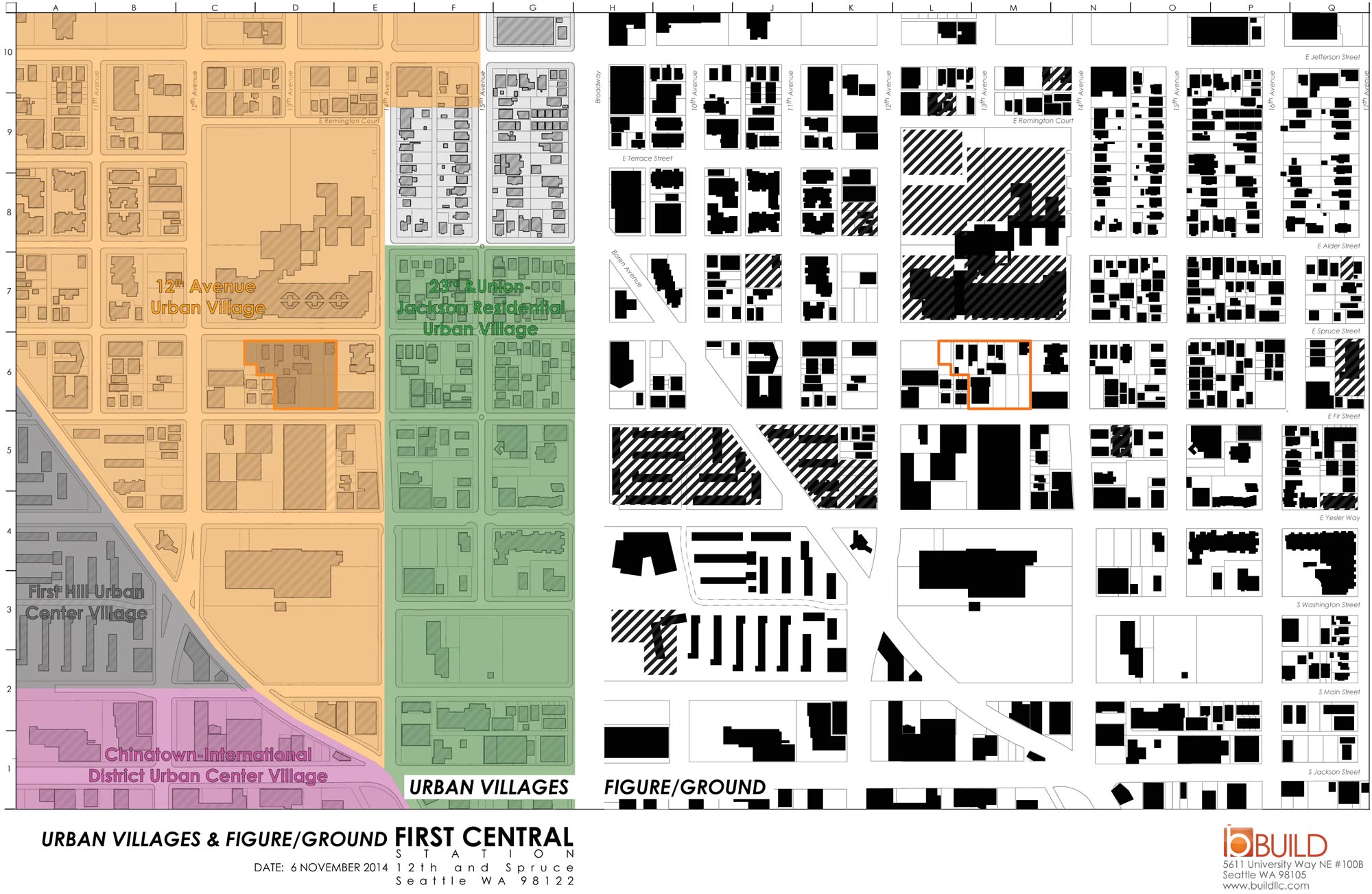 The figure ground study (on the right) applies a simple filter to the neighborhood clarifying buildings (in black), vacant space (in white), and transitional space either under construction or proposed work (shaded). This diagram suggests that the block at 12th and East Spruce is underutilized and, from an urban planning standpoint, too vacant.

ZONING
Comparing the existing zoning (on the left) with anticipated zoning changes to the neighborhood (on the right) shows how this neighborhood will be changing in the decades to come. With Vulcan Real Estate acquiring a 3-block area at the adjacent Yesler Terrace, it’s safe to assume that the area will soon be home to high-tech industry. An existing juvenile detention center will also be moved and rebuilt to include different uses along East Spruce Street. 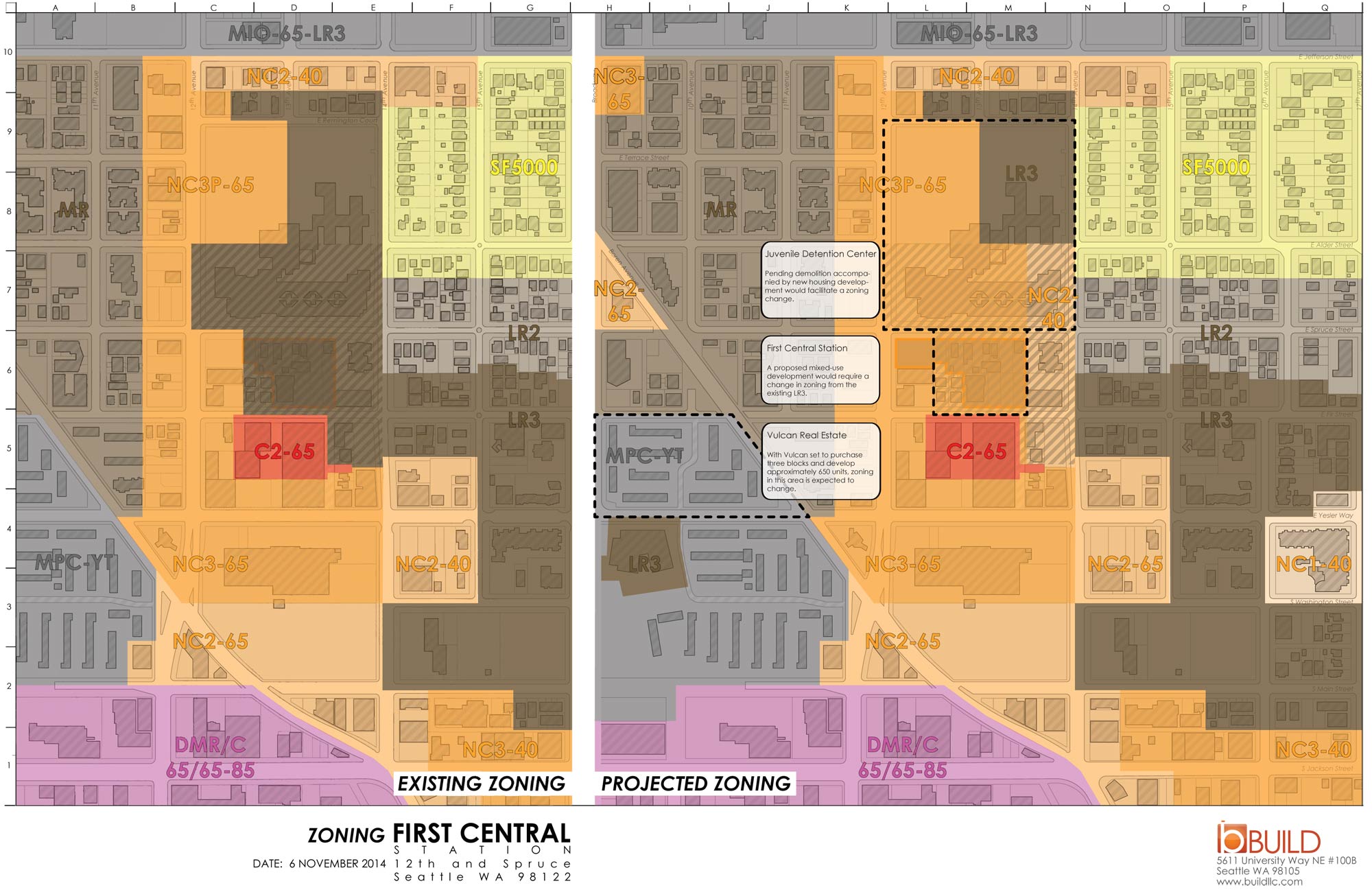 TRANSIT
The regional mapping (on the left) illustrates Seattle’s transit network and the proximity of major transportation lines to the First Central Station site. The neighborhood mapping (on the right) shows a more detailed view of these transit lines with an added pedestrian component. The yellow spheres document the distance of a 2-minute and 5-minute walking radius, which shows surprisingly good access to public transportation and adjacent neighborhoods. 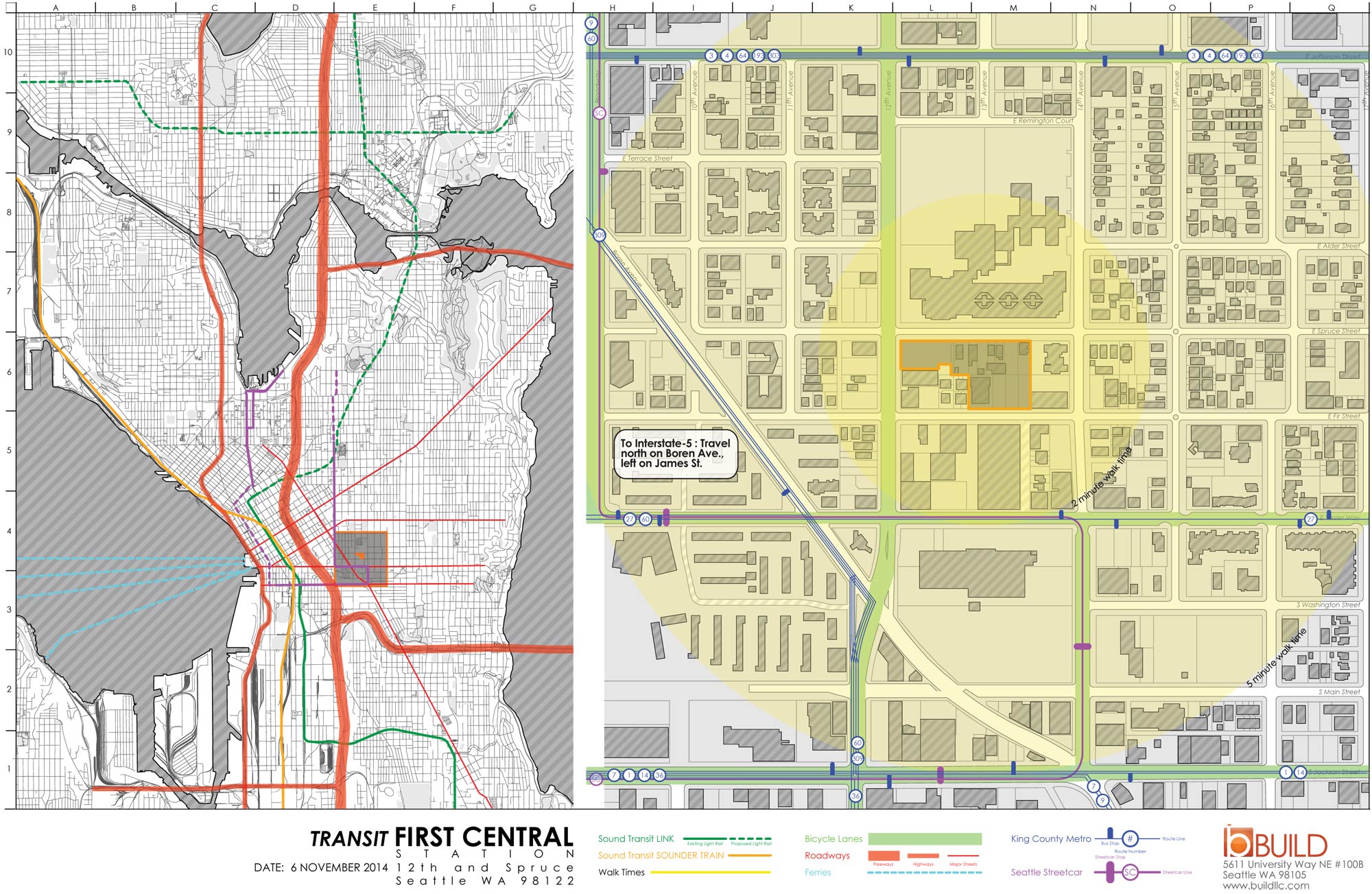 Other surprises include the difficulty of access to I-5 north or south (while the interstate is physically close, getting to the onramps is a circuitous path) and the lack of public transportation along 12th Avenue (a major thoroughfare) which creates a more bicycle-friendly corridor.

PLACES OF SIGNIFICANCE
Perhaps our favorite mapping, this diagram aims to document the hidden gems, the less glossy restaurants, and the places that make this neighborhood special. We took an immediate liking to the population of Ethiopian restaurants, the boxing gym, and the diversity of churches. These places maintain an authenticity to the community and foster diversity. The bigger players also register in this diagram and it’s evident that the neighborhood is surrounded by hospitals, clinics, schools, and other good sources of employment for the community. 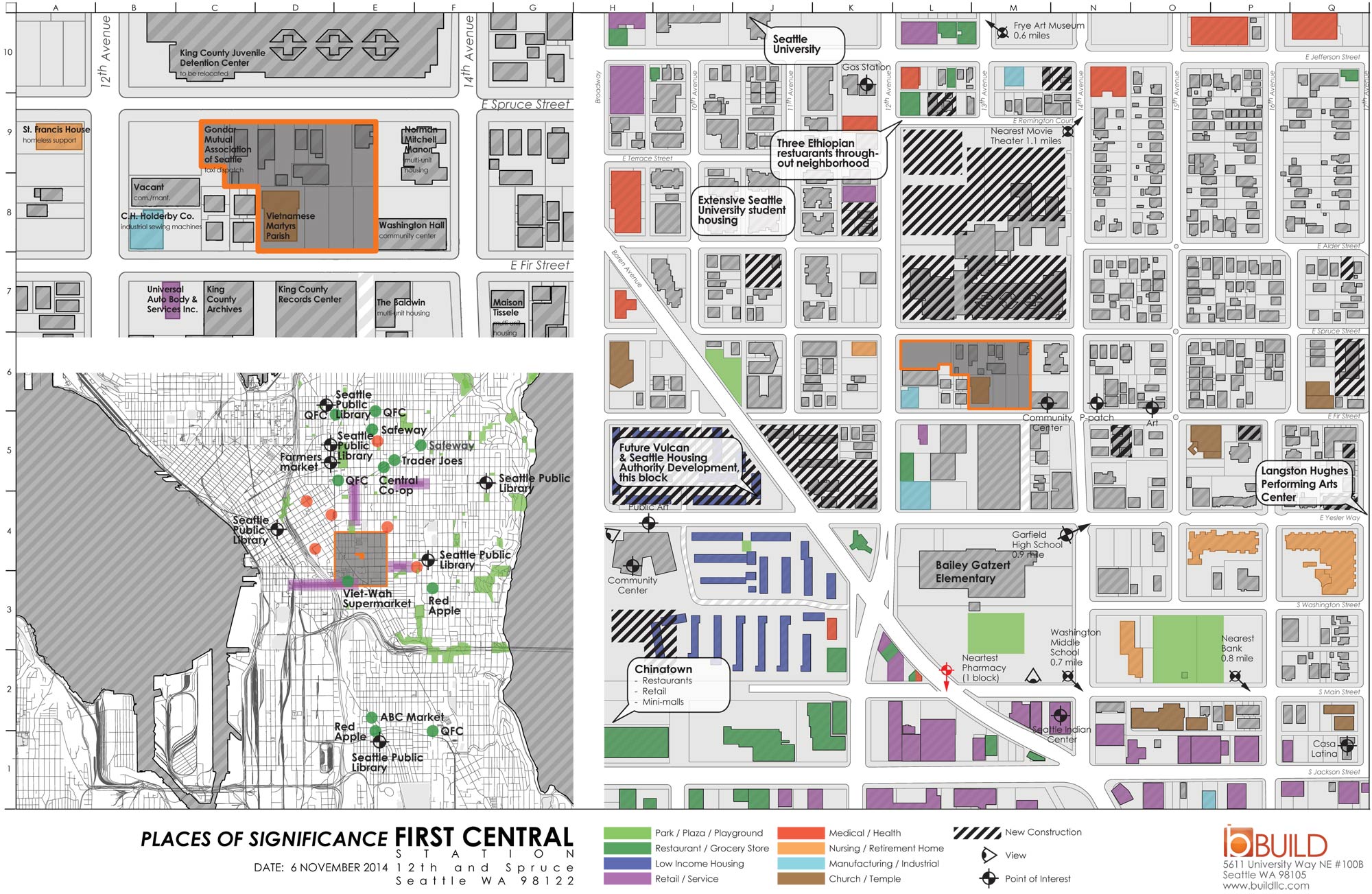 Surprisingly, there isn’t much in the way of a cafe in nearly an 8-block radius (in Seattle nonetheless!). While there are clusters of grocery stores to the north and south, there are a lack of grocery options within walking distance of First Central Station as well as the Seattle University campus. For a neighborhood that used to create exceptional entertainment (see the history mapping), there is little in the way of music or theater now.

PEOPLE PATTERNS
The diagram breaks down the methods of transit by demographic and studies who is going where. The study identifies certain paths, like Yesler and Boren, as the major travel routes while the residential neighborhoods to the northeast stay relatively quiet. Of particular note is the lack of movement along 13th Avenue as its length is interrupted between East Fir Street and Remington Court (this will be important below). 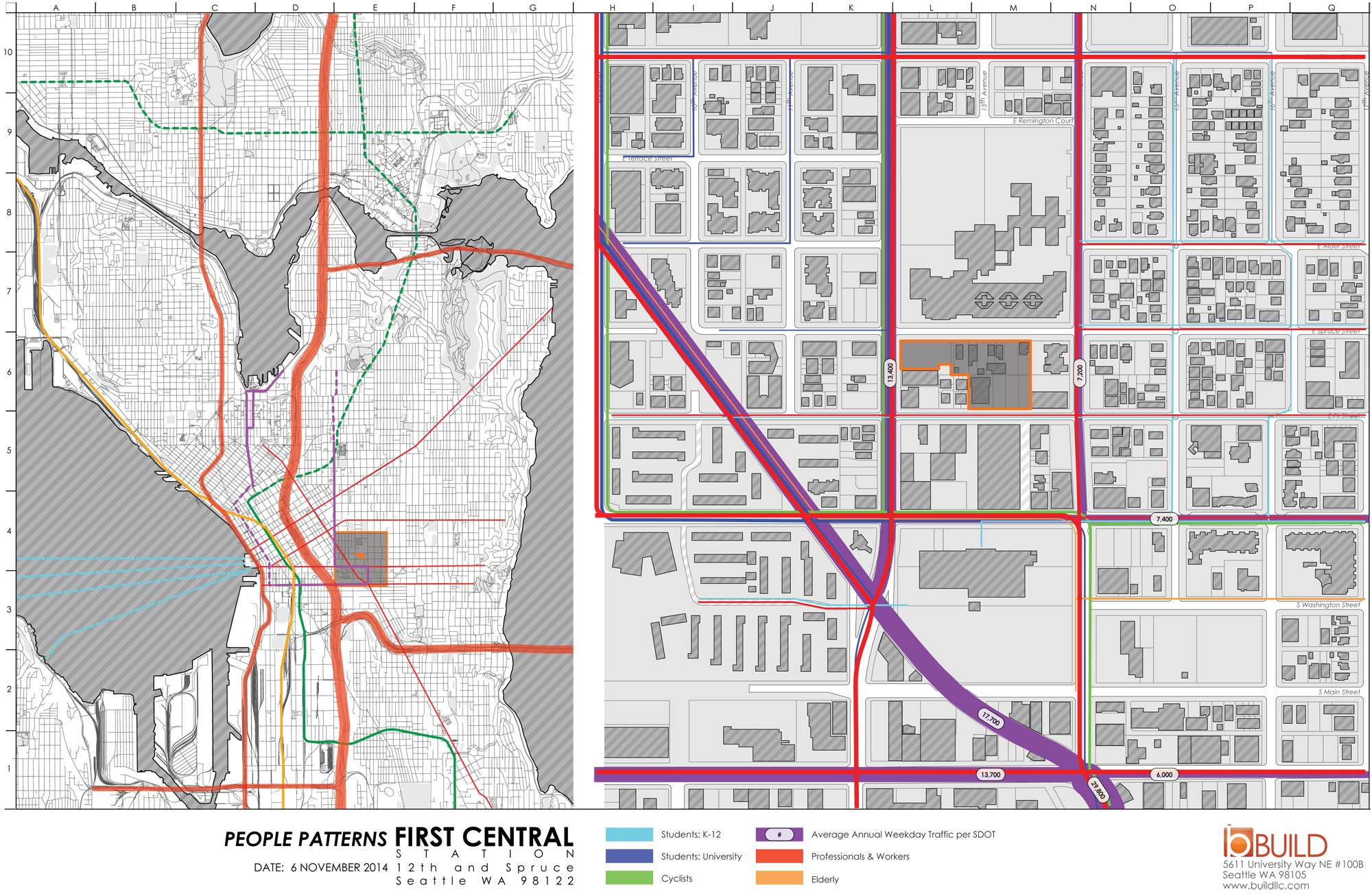 This mapping study allows the design team to have a well-informed conversation with community groups and the building department. It’s also nurturing a healthy design dialogue amongst the architect and developer team. As we start to formulate ideas and design concepts, the conversation is all the more fruitful and the diagrams below begin to carve away at the massing for the site.

FIRST CENTRAL STATION DIAGRAMMING
The first diagram illustrates the possible built area of the First Central Station site with the setbacks and height limits registered. We often like to think of these diagrams as a block of clay that’s being carved away – it’s not architecture (not even close), but it’s starts to define what’s possible and what’s not. 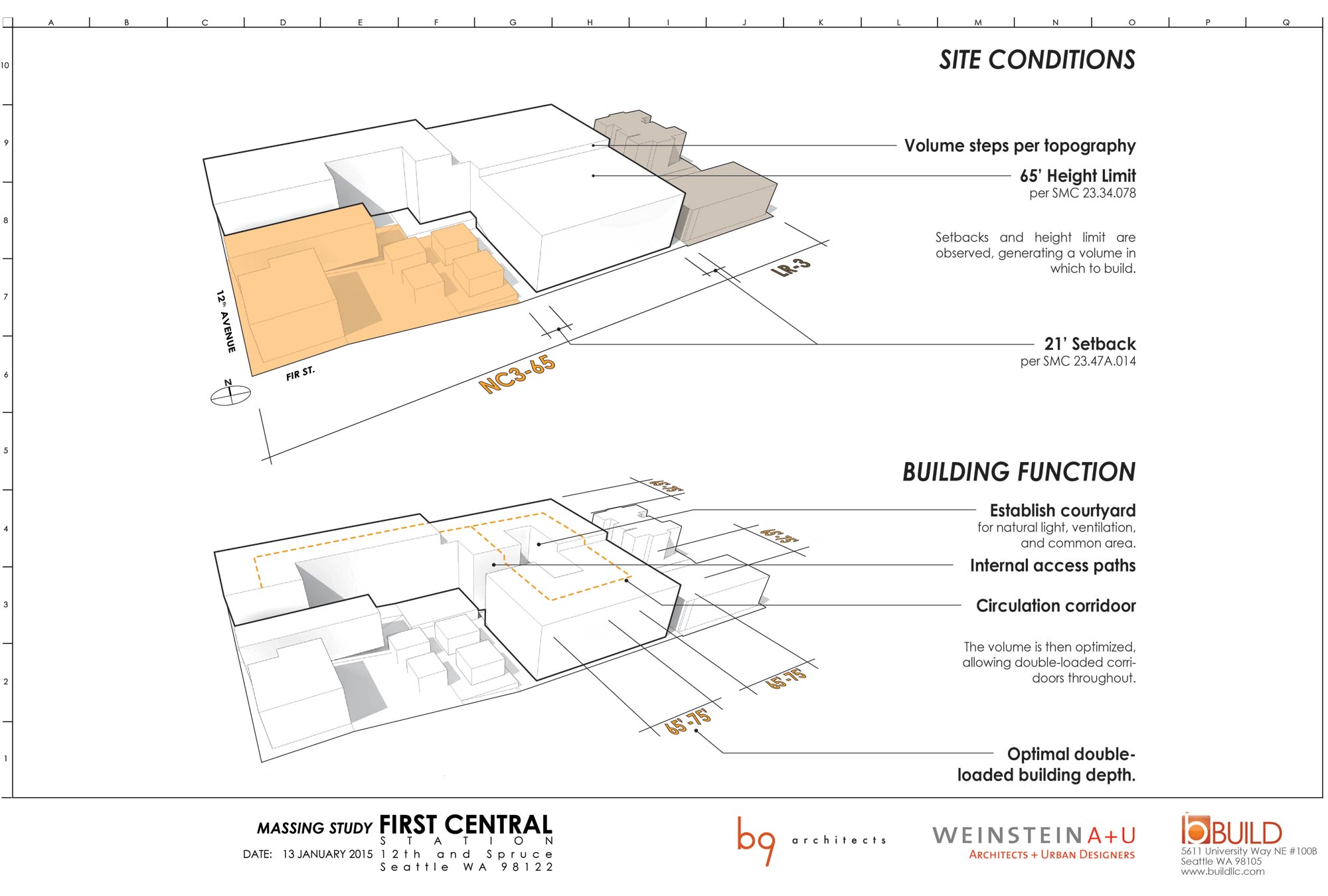 The second diagram in the image above then carves space away for building access, circulation, corridors for natural light, and realistic corridor dimensions. These parameters begin to add definition to the massing.

The third diagram (below) breaks the mass into three separate structures (each of the project architects will thereby design one of three buildings) and begins to further define useful urban exterior spaces. These outdoor functions could be places for public enjoyment, gathering, or even spots to host music events. The massing also re-establishes the connection to 13th Avenue by creating a pedestrian corridor through the site. This corridor could allow the public access to the open court areas as well as retail and restaurant opportunities. 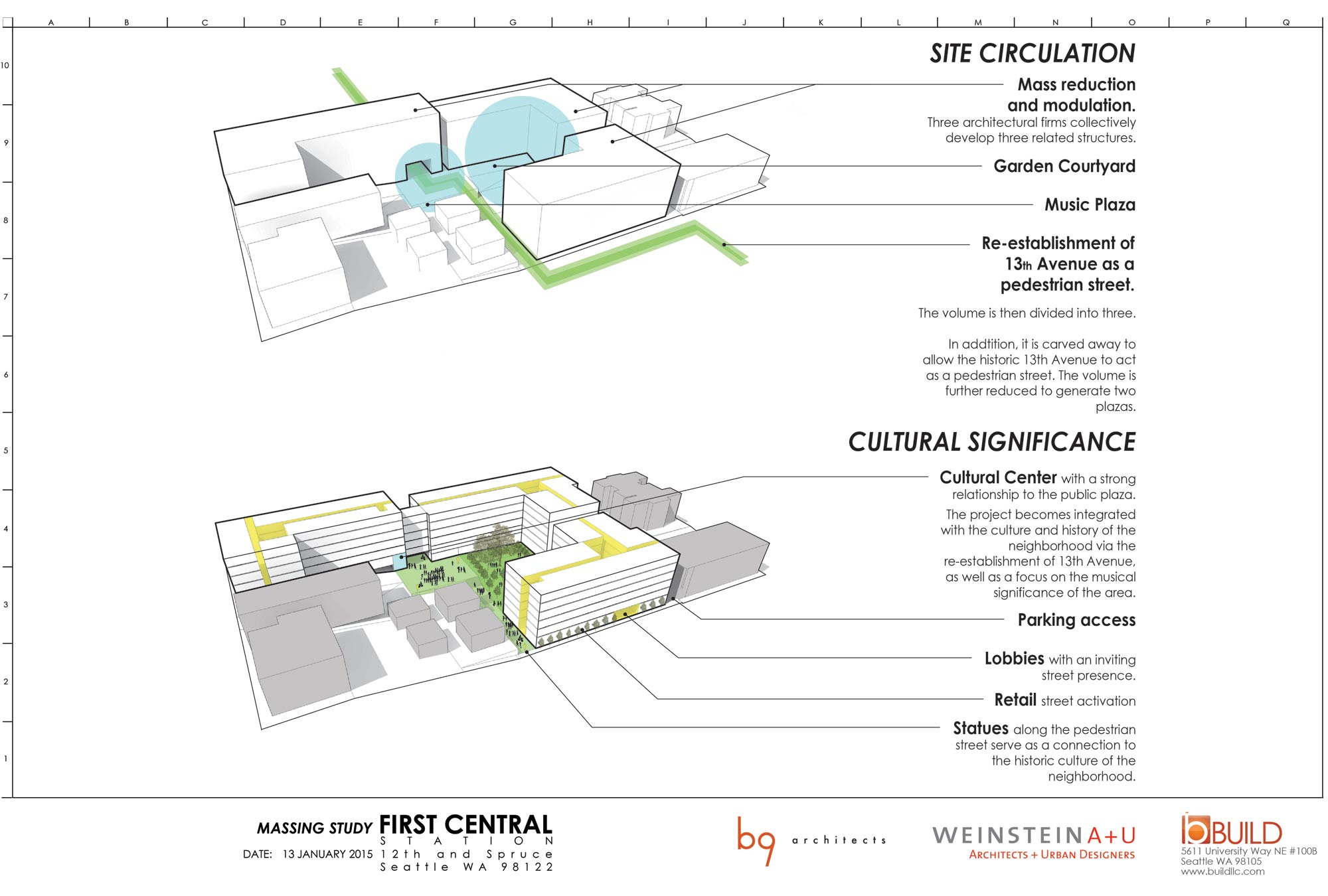 The fourth and final diagram of this study begins to activate the site with cultural significance. It’s still not architecture, but it’s providing some importance as to the massing of the site.

Introducing “eyes on the street” (a praised value of Urbanist hero Jane Jacobs) plays an important role with the safety and care of the neighborhood. Additionally, thoughtful programming of the site will foster activation of these exterior spaces at certain times of the day and night. This diagram also brings realistic circulation patterns into the fold with designations for parking access, lobbies, and movement.