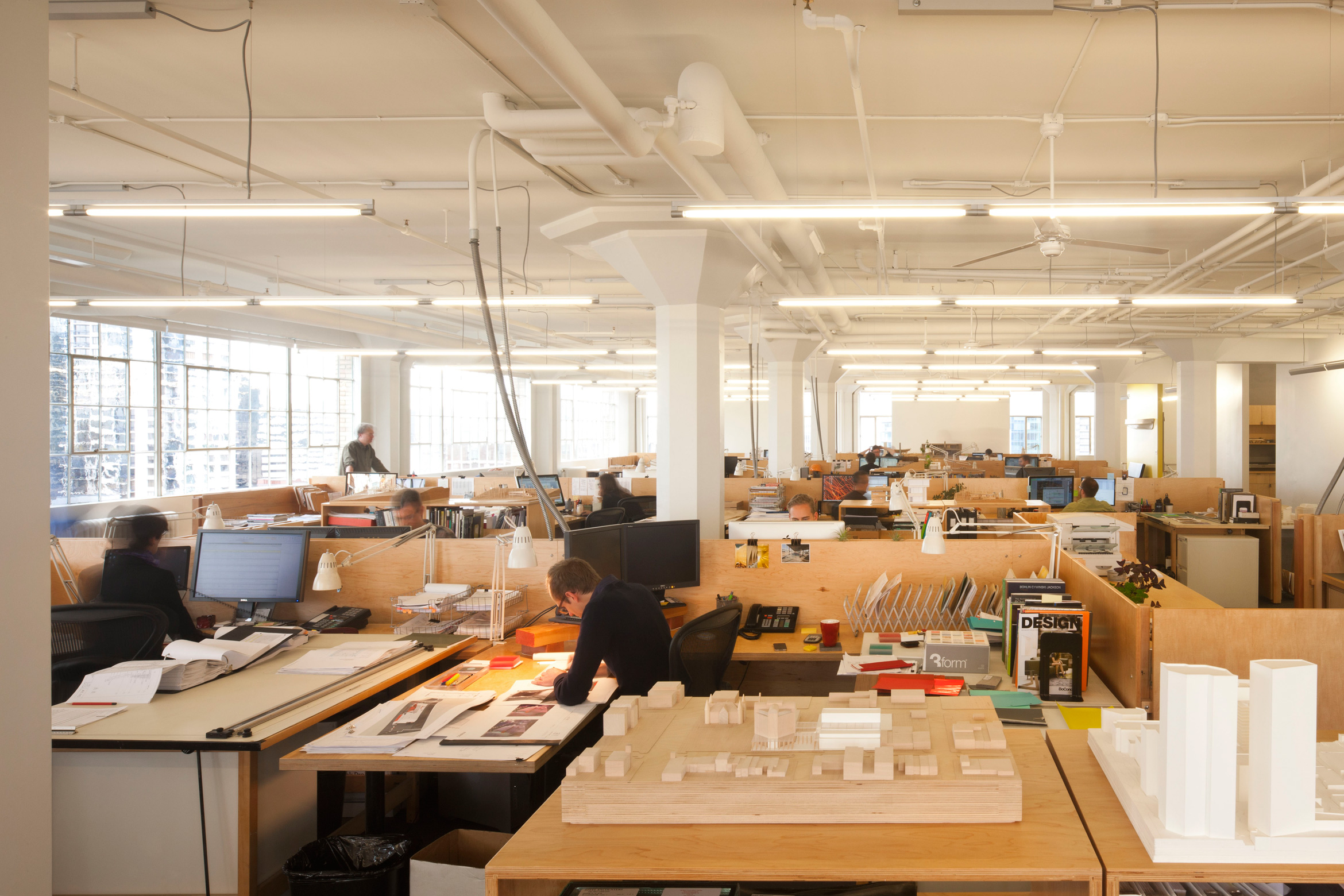 Last summer, BUILD sat down with Peter Bohlin and Ray Calabro of Bohlin Cywinski Jackson at their Seattle office to discuss their process of designing everything from art galleries to books as well as the importance of understanding clients. For Part 1 of our interview, head over to ARCADE Magazine.

Peter, you studied at Rensselaer Polytechnic Institute, then went on to Cranbrook Academy of Art for your graduate degree during its zeitgeist in the early 1960s. What were the most formative experiences during your years as a student?
Peter Bohlin: One summer, during my studies at Rensselaer Polytechnic Institute (RPI), I apprenticed for William Lescaze. His only words to me were, “Don’t bother me, I’m a busy man.” But at Lecaze’s office, I was mentored by Gerhard Kallmann who was a professor at Columbia University and Princeton. Gerhard was an exceptional teacher, and he took time with me, which was extraordinary. Every week he gave me something new to do. We’d eat lunch and talk about architecture. I learned more from Gerhard that summer than at any other equivalent amount of time at school. I spent a great deal of time in the library and in studio, and I’d often travel to look at buildings.

Cranbrook was a treat after that. I was there for the last two years of Eero Saarinen’s life. Charles Eames stopped by once or twice since he and Eero were friends. At the time, Eames was making a film on the People Movers at Dulles airport. At Cranbrook, I could pursue my own interests. We didn’t work on formal building programs, instead we chose our own challenges. So in two years I did about 30 projects. Some were little bits, some were larger, some simply studied the nature of things. I worked on what interested me and I moved forward and backward rather than the linear process of making a building step by step. This approach often exercises an architect more, and it’s how I still teach today. And I loved to draw. While most architects are computer adept, I often find visualizing the world through hand drawing or by building physical models to be more revealing.

Ray Calabro: You often talk about emotion and drawing. This reminded me of the way you talk about the difference between computer and hand drawing–drawing being more visceral, and appealing to the emotional side in people.

PB: And you can manipulate drawing to get at what’s important and what’s not. A computer drawing makes everything rather even, although someday it will probably be able to be more like a thought/feeling process. 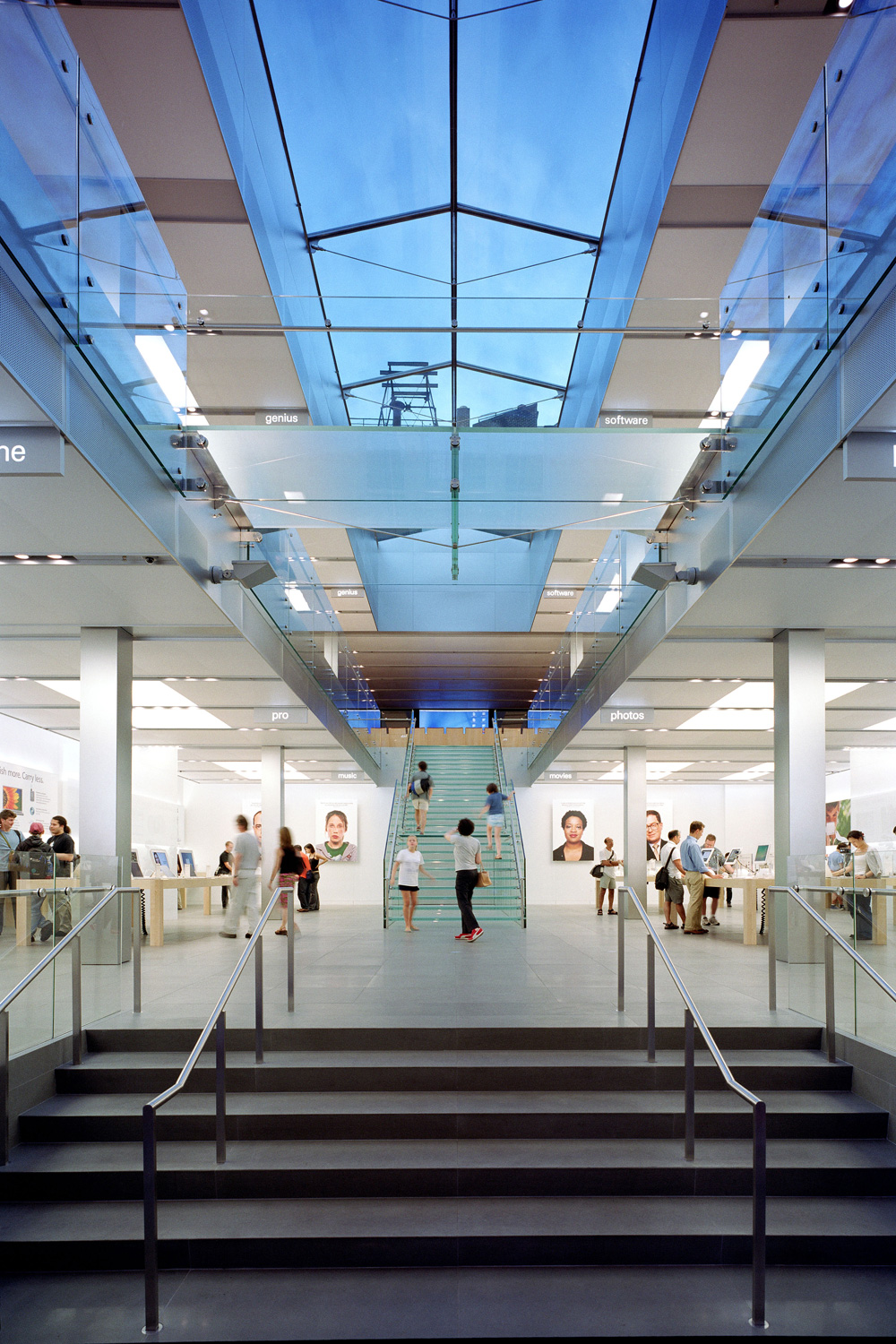 What have been the most successful methods of delegating responsibility over the growth of the practice?
RC: Something I appreciate about Peter is he can think about broad things like planning and overarching principles, but also about detail in the same breath. He is genuinely interested in every phase and scale of design and that interest has created a culture of people that are also interested in all aspects of design. He’s happy to discuss in a single session how the building relates to the site and also if the coping is too big or the way the waterproofing detail wraps the edge.  There’s always been this interest and belief in making inspiring, powerful architecture and buildings that perform well.

PB: Sometimes you worry about being too sensible, but architecture is rooted in those things.

It sounds like you’re fostering a culture where everyone’s thinking both in macro and micro.
RC: We hope so; we encourage it. That’s a critical thing. An interviewee commented recently that she appreciated our craft of buildings, and that many firms are not as interested in that.

PB: That approach makes a special kind of architecture. Not just the way they perform, but the emotional aspect. It’s good to think about how people feel when they walk up a stair and what they touch and the quality of the light. The potent positions are usually where you begin and end – the top and bottom of columns or the beginning and end of a path. Current architecture doesn’t think enough about those issues.

RC: A lot of it is more experiential. Our process is rooted in going to a site and absorbing all the nuances and circumstances, whether it’s an urban or rural setting. An interesting thing is to watch Peter as he walks and pauses on a site. These actions are embedded in how he looks at the world.

PB: I think we’re all a little like diviners at certain moments. On one hand you’re that, and on the other hand, you have to also be sensible and tough-minded. And how do you marry all that? That’s the wonderful thing. That’s why it’s such a treat to be an architect. 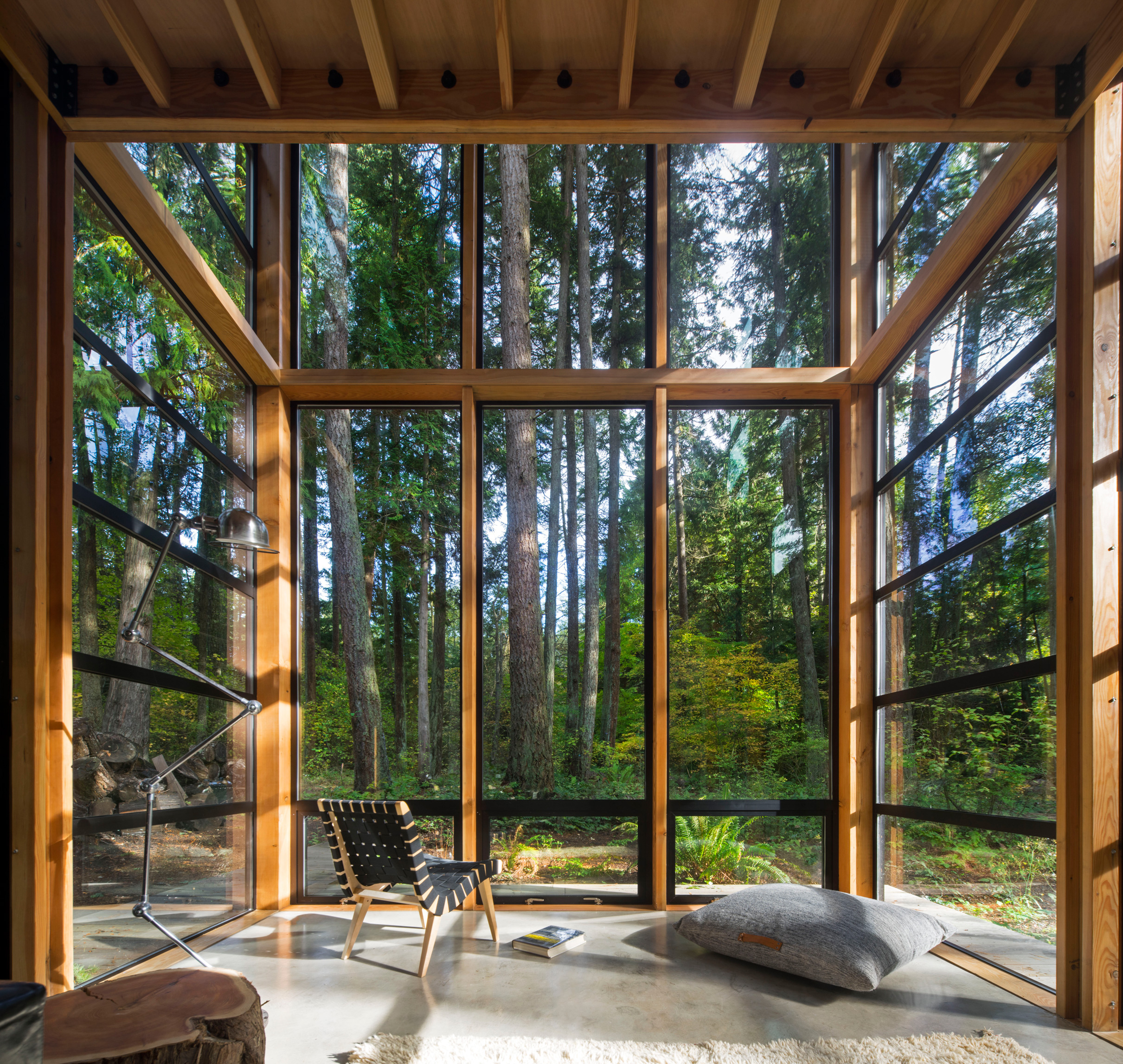 BCJ completes a wide range of project types from residential to public and institutional work. How does the firm maintain a high level of technical expertise on so many different project types?
PB: We thrive on the variety – large and small, simple and quite complex. We’ve designed a 1,600 square foot house here in the northwest that we feel really good about called The Lightbox for the photographer Nic Lehoux.  On the other hand, we are currently working on a fascinating large corporate complex.  The mix is so satisfying.

RC: When we were hired for Pixar, Steve Jobs said, “Peter, you do really good big buildings, and you do great houses.”

PB: But I don’t see a difference; there’s a human and place making a connection between all of them. The level of discipline required is different, but both are getting at the nature of specific people and places, on both intellectual and emotional levels. It’s useful to recognize that the emotional and the intellectual sides work together, so that they reinforce each other. In each case, you have to decide what’s important, and you must have the discipline to follow it through.

RC: I think the culture of the practice is largely due to Peter spending time in each of the offices, mentoring people like me, principal Robert Miller, and associate principal Patreese Martin, and many others in all of the offices. It has produced a culture within the practice of people with similar ideals, but not identical thoughts.

PB: There are always other people involved in a project and there’s a pleasure and value in working together. Buildings are a communal effort and anyone that thinks it’s just themselves may not be doing their best.

Is it difficult to pour so much time and talent into projects that, due to the client’s high profiles and circumstances, can’t be published?
PB: A little because you’d like people to share it with others. But even then we can sometimes publish a project without listing client names. Parts of the Pixar headquarters we designed in Emeryville, California, weren’t allowed to be photographed, but on the whole our clients have been quite kind about allowing us to publish our work. And the ones that won’t allow their projects to be published will often request a nondisclosure agreement at the start. 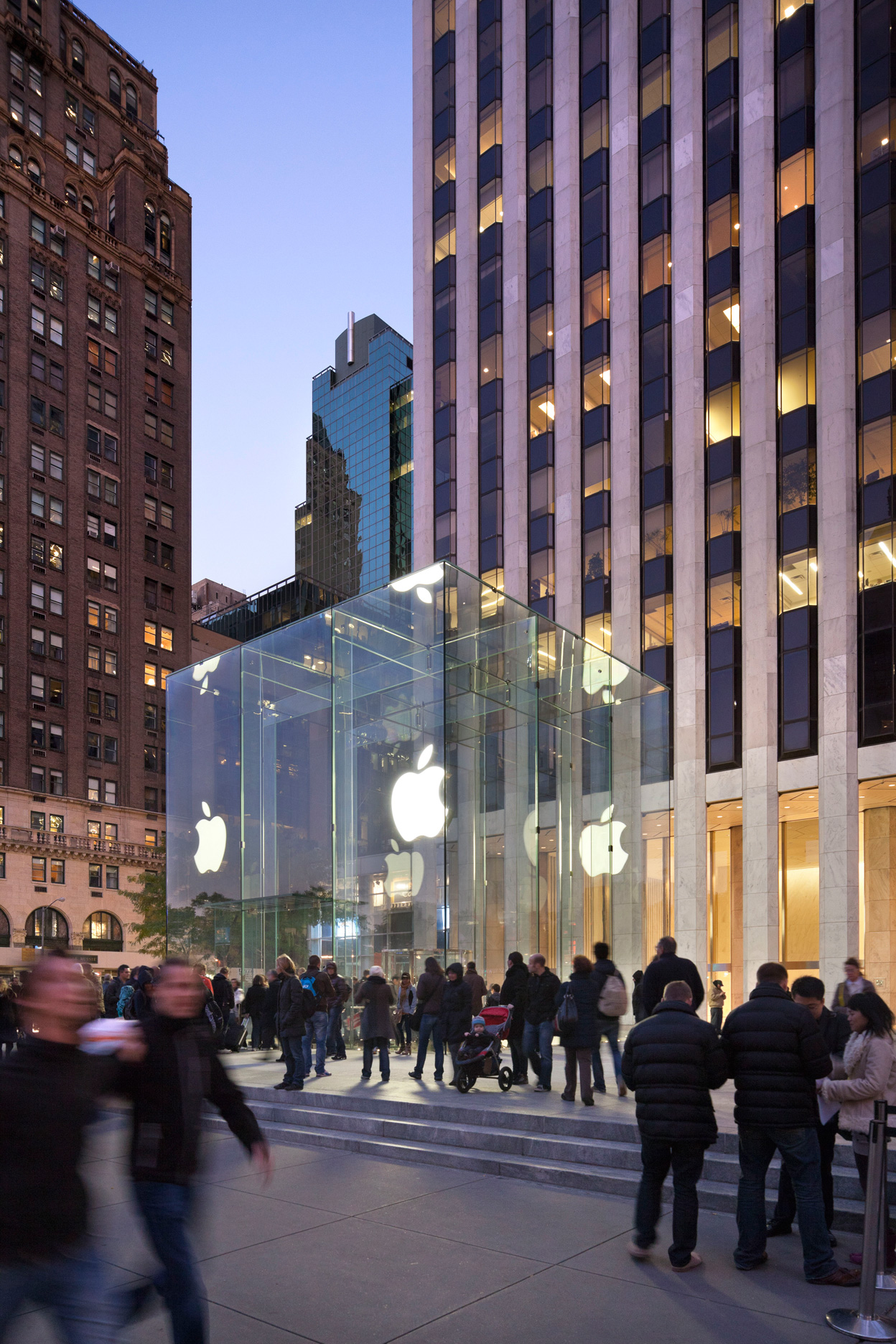 BCJ was among the first architecture firms to experiment with structural glass, as seen in the SOHO Apple Store completed in 2002 and the Fifth Avenue Store completed in 2006 . Where is the firm pushing technology these days? Are you experimenting with materials and technologies like that today?
RC: The work we’ve done with structural glass has influenced many projects large and small. It’s also led to further explorations dealing with the technology of color, ceramic frit, and different types of assemblies.

PB: But it depends on money. It’s always about finding out where your limits are, where you can push them, and where you can’t.

RC: This example isn’t necessarily high-tech, but for years Robert Miller, one of our principals, has been experimenting with the notion of making transparent modernist buildings using very economic means. He’s been looking at ways to use simple wood stud framing to make a module that works with the maximum size of a Milgard window, or other similar manufacturers. Essentially making an economical, easily constructed glassy skin. That’s the other end of what I consider “technology:” using off-the-shelf products that are readily available and combining them in innovative ways.

PB: We’re designing hardware now. The first set of hardware we designed was for the Creekside Residence and now our hardware is on the market through an online company, Reveal Designs.

RC: We’re tremendously interested in materials. We’ve been experimenting with bending and shaping perforated metal. A good example of this is a project for Uniqlo in Shanghai which has a perforated metal skin that’s backlit. There’s also been a real interest in wood, and we’ve started experimenting with curved beams. We’ve developed a series of glulam beams that curve along their axis and also in section.

Is there a clear hierarchy between the 5 BCJ offices around the U.S.?
PB: Every one of our offices is different. We have 12 full partners and associate partners as well and I no longer have a controlling interest. I made that decision very early because that’s not how you do the best work nor the way you let people like Ray or Robert put their hearts into things. It says something about how we’re organized. Not that we have it all down, but it’s good to not be too perfectly organized. You don’t want to turn it into a totem pole, you want to have great people. That’s why we don’t have private offices. We have spaces like this conference room where you can go and make a phone call, but no private offices. 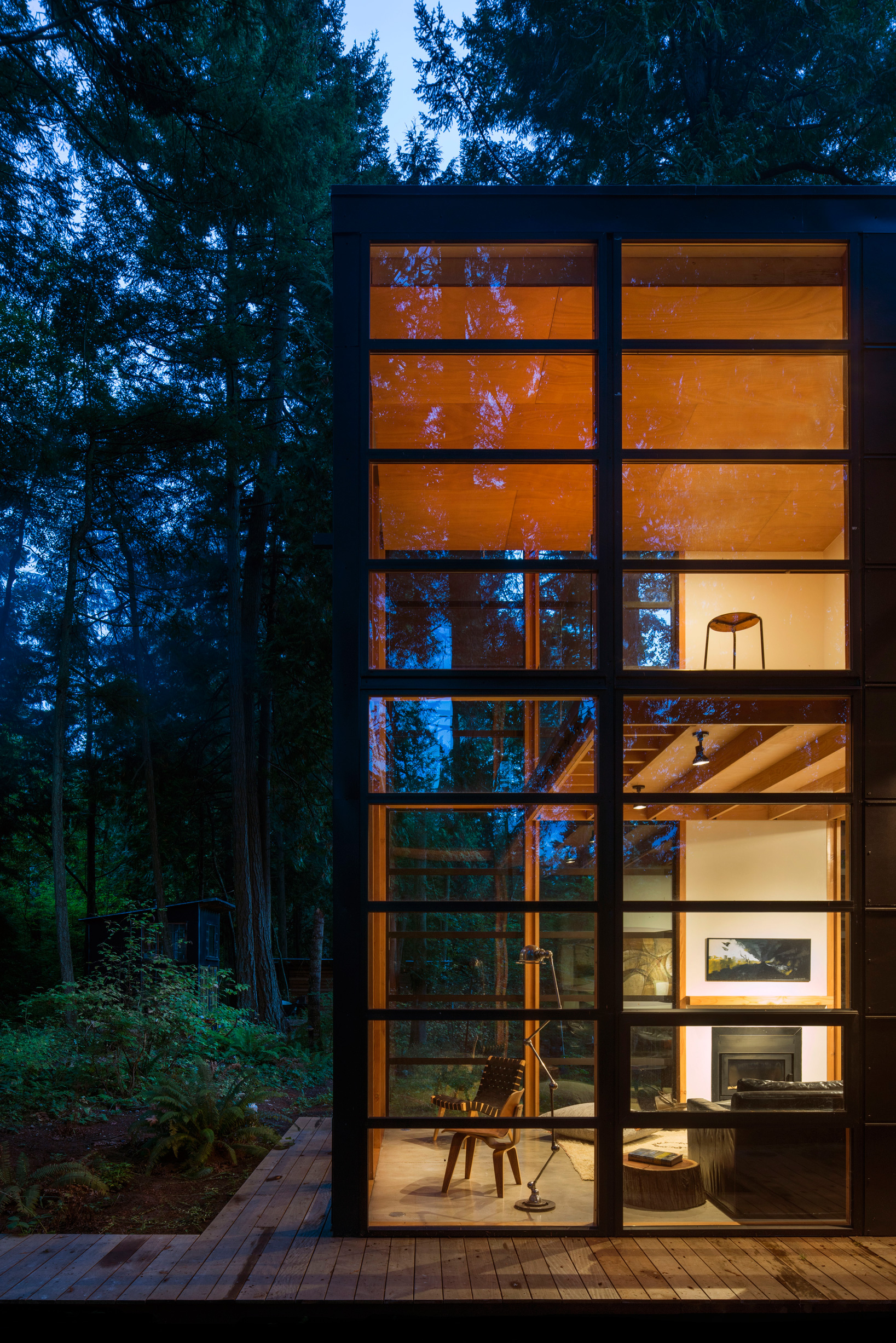 Peter Bohlin, FAIA, is a founding principal at Bohlin Cywinski Jackson and one of America’s leading architects in practice today. Founded in 1965 in Wilkes-Barre, Pennsylvania, with Richard Powell, the firm has expanded to five offices in Pittsburgh, Philadelphia, Seattle and San Francisco. In 1994, the firm received the AIA Architecture Firm Award. In 2010, the AIA awarded Peter their Gold Medal, the highest honor they bestow upon an individual in the profession.

Ray Calabro, FAIA, holds a Bachelor of Architecture degree from Virginia Tech and is a principal at Bohlin Cywinski Jackson. A member of the firm since 1995, Ray’s experience includes visitor centers, corporate headquarters, academic buildings for science and research, and private residences across the western United States and Canada. His leadership and vision are most clearly demonstrated by the award-winning Grand Teton Discovery and Visitor Center in Jackson, Wyoming. He leads Bohlin Cywinski Jackson’s publication efforts and serves as president of the Board of Trustees at ARCADE.