Years ago when we built the Park Modern building we were required to install a ship ladder to the roof so that firefighters could get to the elevator penthouse in the event of an emergency. Fine, we thought – that makes sense. But once you have a ship ladder to the roof, there is a life safety issue with the potential of people climbing the ladder and accessing a roof that doesn’t have guardrails. The building code then requires a security gate on the ship-ladder with a lock. And once it’s locked you need a key. Since the nature of the ladder is for emergencies, it’s the firefighters who need access to this key –so, again per the building code, a fire engine red “break in case of emergency” key box was required adjacent to the gate. The whole thing just seemed much more complicated than it should have been. 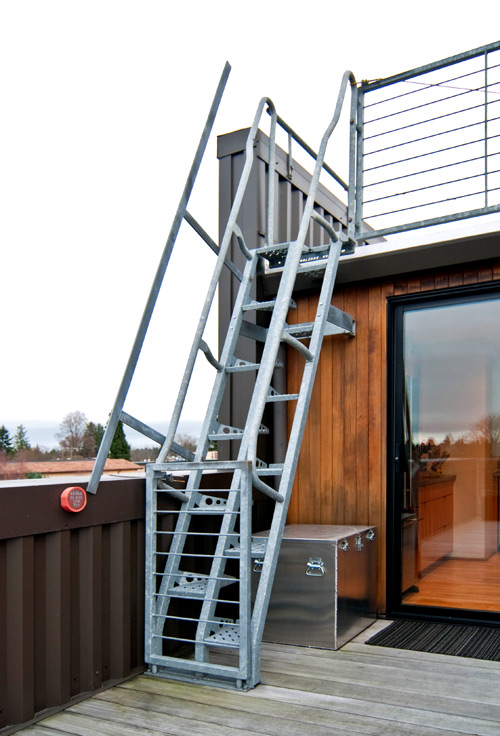 Not long after the building was completed we had a deck party and one of the guests happened to be a firefighter. We explained the ship-ladder situation to her; that the emergency glass must be broken to get the key to open the lock to open the gate to access the ladder. She laughed and said “I wouldn’t do any of that, I’d just climb over the gate.”

This put us at ease about two things. First, it validated our opinion that the entire building code enforced sequence was nonsensical. And second, that our firefighters are rational problem solvers.  (Thanks firefighters!)

What doesn’t provide us peace of mind is that, while minor, this situation is a crystallization of a bigger nonsensical picture; too often the building code requirements contradict common sense. This is harmful on many levels:

The financial and time implications on our ship-ladder incident were minimal, but scale this logic up a few notches and it gets into real money with serious schedule impacts.

Contradicting common sense confuses people; homeowners, business owners, and tenants fail to find value in the building code when the requirements don’t add up to something that has a direct relationship to “safeguarding public health and safety”. When people don’t see the value in building codes they tend to favor the loopholes.

It’s a poor use of people’s time. Most everyone likes doing something useful, something of value. The hard-working individuals at the building department are no different. It must be frustrating to work on building codes that contradict common sense or conflict with other codes.

Obviously building codes were originally put into place for good reasons: life safety, the health of our built-environment, solving disputes, keeping the peace, and so on. And we wouldn’t want to operate without regulation, but something is amiss with the current state of most building codes –we’ve gone off the rails.

We’ve been scratching our heads a lot on this one and we’ve come up with 5 solutions to make for a better building code. Granted, some of them are bold suggestions requiring major social shifts; but, nonetheless, here’s what we think needs to happen for the building code to become a sensible, purposeful, and respectable document again:

Soft eyes; jurisdictions need to take the big picture into consideration before implementing building codes that address granular issues. They need to use their “soft eyes” as we like to say.

Vertical communication; there needs to be more communication between the people writing/enforcing the building codes and the people in the field building/using/designing the built-environment. The code writers need to talk with the fire fighters.

Lawsuits need to be replaced with conversations (refer to major social shifts above). A quick review of just about any chapter in the building code and it’s painfully evident that a significant amount of the codes were originally written as a response to someone suing someone else over something that could have been resolved through a conversation.

Fewer building codes and more responsibility. Architects need to take full accountability for their designs. Too many codes are being written to regulate and penalize architects who submit poorly conceived designs or half-baked permit documents. Professionals who are accountable and responsible shouldn’t need a 4.5” thick binder telling them how to design. (Did we mention that some major social shifts are needed to get us out of this conundrum?)

Less paperwork; the amount of submittals, forms, and documents required to obtain a building permit in most urban areas has become entirely ridiculous. Spending more time on the permit submittal forms than on the architecture itself should be a red flag to architects and building departments alike. It is possible to maintain regulation of the built-environment without nearly this much paperwork.

So there are our top 5 ideas for a more purposeful building code; feel free to add yours. Take ‘em, leave ‘em, counter-offer or laugh at them. Either way, they are more realistic than the notion of fire fighters ever using the key and gate to access our roof.