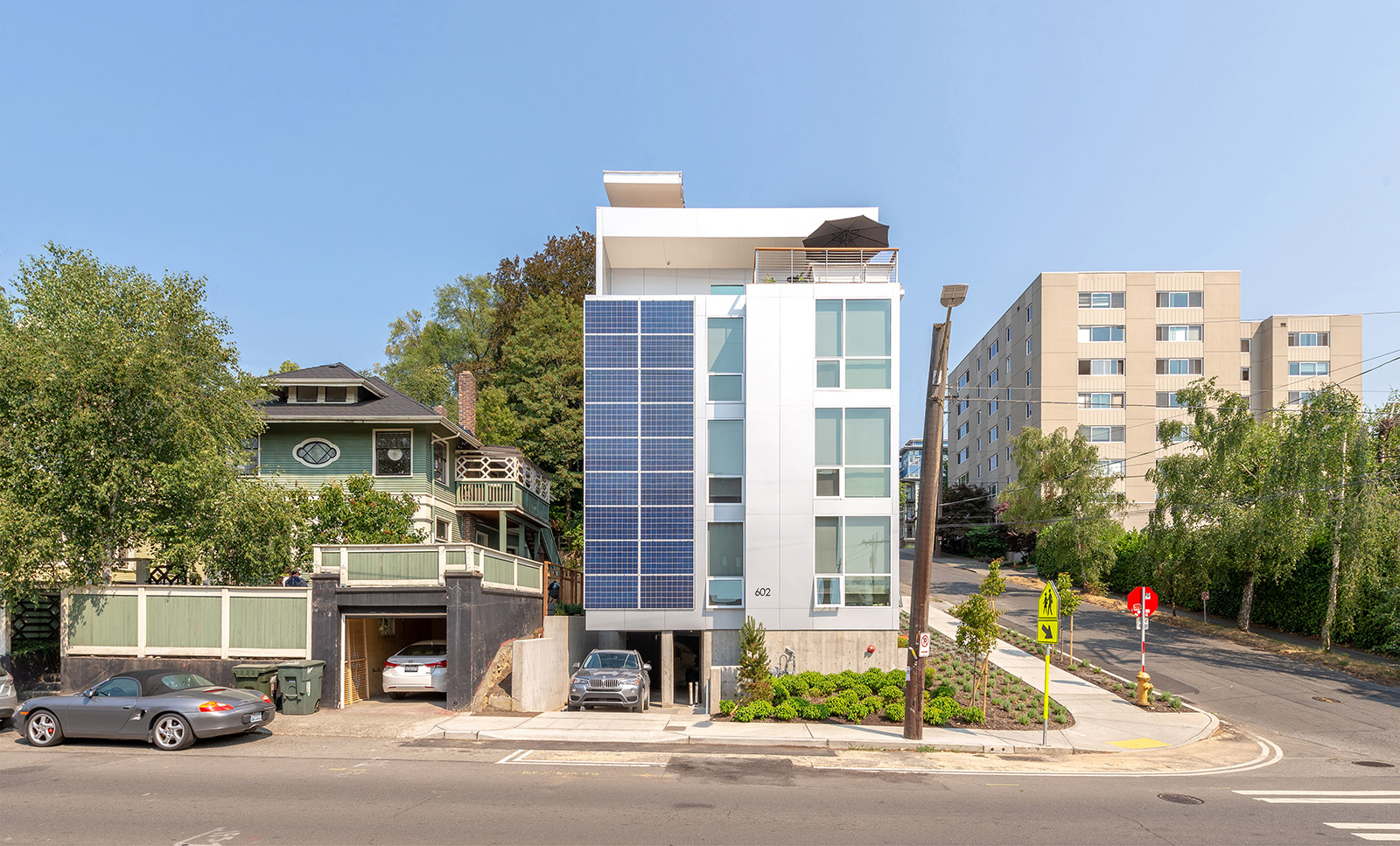 The Net Zero 2050 goals (defined in the Inflation Reduction Act this last August) include varied and wide-ranging policies, however a clear message is made with respect to the design and construction industries; decarbonizing the economy is one of the central tasks of our era. In other words, and especially when it comes to buildings and houses, architecture needs to incorporate clean electricity at an unprecedented rate.

Here at BUILD, we’ve been examining our own projects — past, present and future — with respect to the critical need to create a sustainable built environment. While the solutions are multi-pronged, and our education on sustainability evolves by the day, one design component is imperative and irrefutable: the inclusion of solar panel technology in architecture. The benefits of solar energy, its technological advances, and the market accessibility make adding solar panels to houses and buildings a no-brainer. After completing the design and implementation of solar panels on projects of all different scales, it’s worth sharing what we’ve learned to-date. While this article gets into the nuts and bolts, costs and metrics of solar energy, the primary take away should be just how approachable solar technology now is. 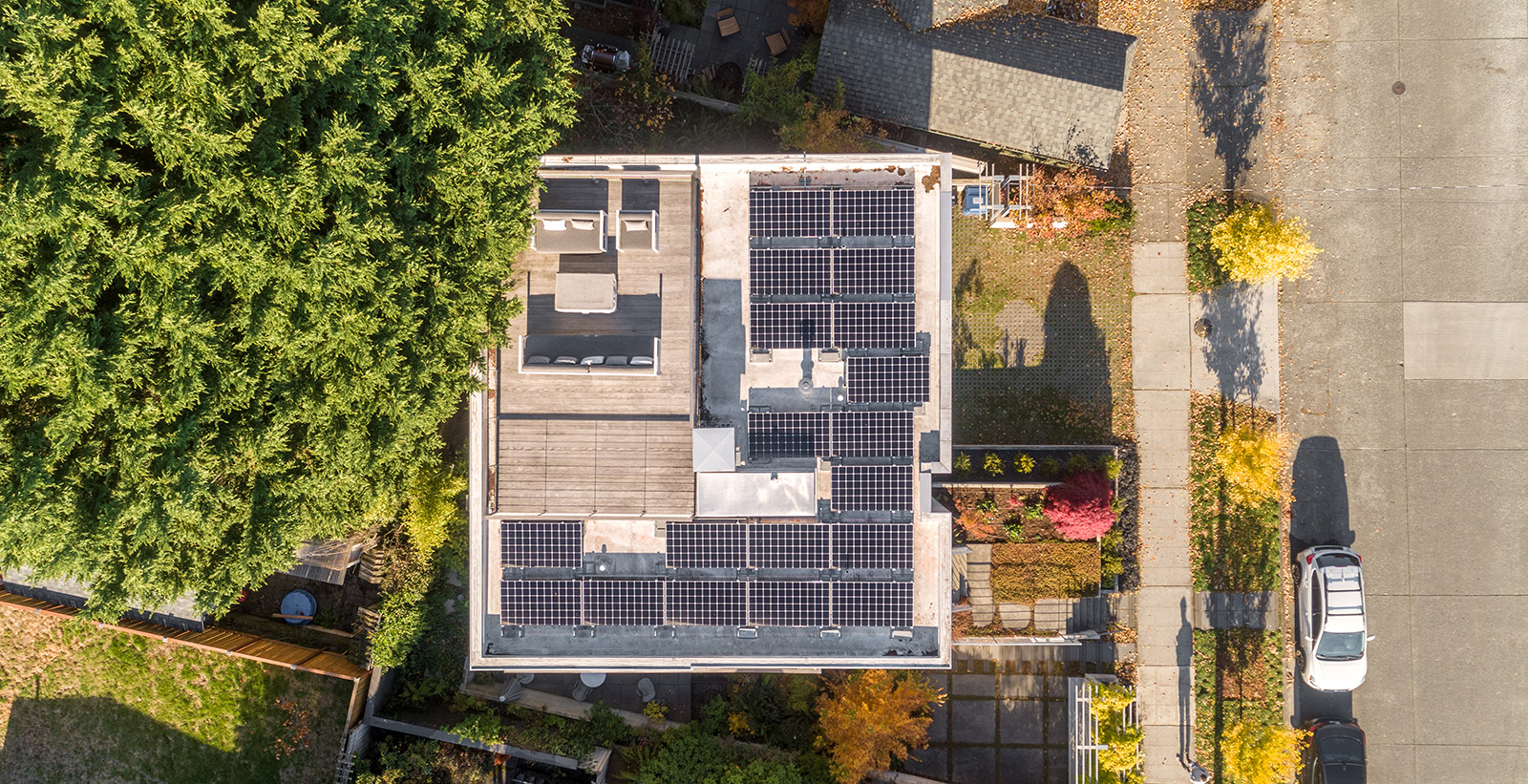 CSH 2016
Five years after the completion of BUILD’s Case Study House 2016, a solar panel array was designed and installed by Puget Sound Solar. The system includes (19) photovoltaic panels made by LG. The Direct Current (DC) energy produced by each panel is then converted to Alternating Current (AC) electricity via (19) inverters (one for each panel). This AC energy then feeds a 10kW battery storage unit in the garage (optional). Once the battery is charged, energy produced by the solar panels then feeds directly to the city grid. The amount of energy fed back into the electrical grid is metered and deducted from each utility bill.

At the height of summer, the carbon offset of this system is about 1000-lbs per month—the offset equivalent of 12 trees. This carbon free energy source reduces the annual electric bill of the primary residence and accessory dwelling unit by about 50%, from approximately $2,000 to $1,000. The cost of electricity in the City of Seattle is about $0.13 per KWH, and it increases approximately 4% each year. Given this math, the payback cycle of the system is about 20-years without the optional battery storage, and about 23-years with the battery storage system. After that point, it’s all free energy. While a 20-year cycle may seem like a long time to achieve the break-even point, to put it in perspective, this is the approximate replacement timeline of a composite shingle roof. 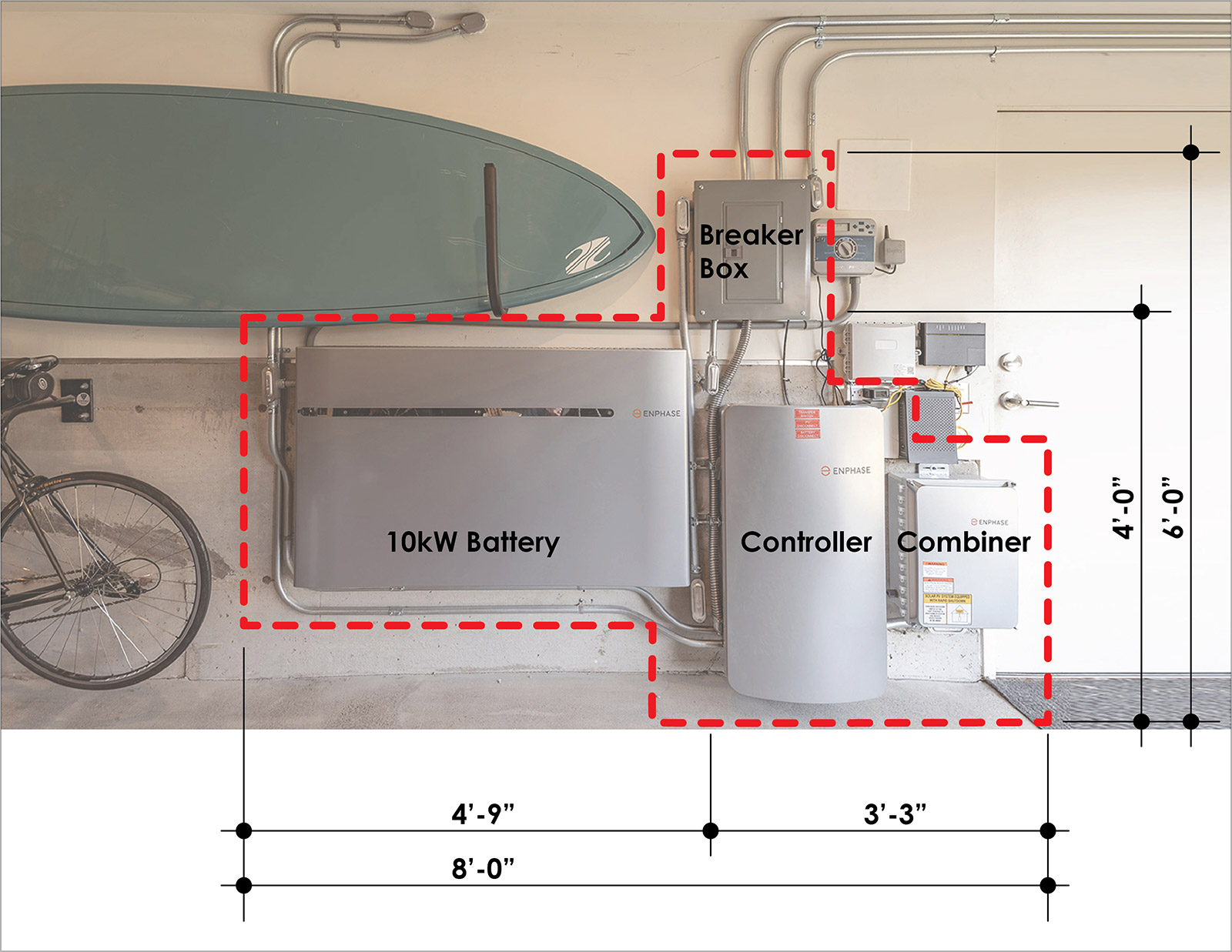 The solar panels can either be mechanically attached to the roof via lag screws, or weighted down with concrete blocks as ballast. We highly recommend going the ballast route, as it doesn’t involve any punctures to the roof (the entire system simply lays on top of the roofing system). Using the ballast system will likely require a letter from a structural engineer stating that the roof can support the additional weight, but many roofs can accommodate this without additional structure. For new construction, let your engineer know that you intend to use a solar panel array with ballast for their dead loads. 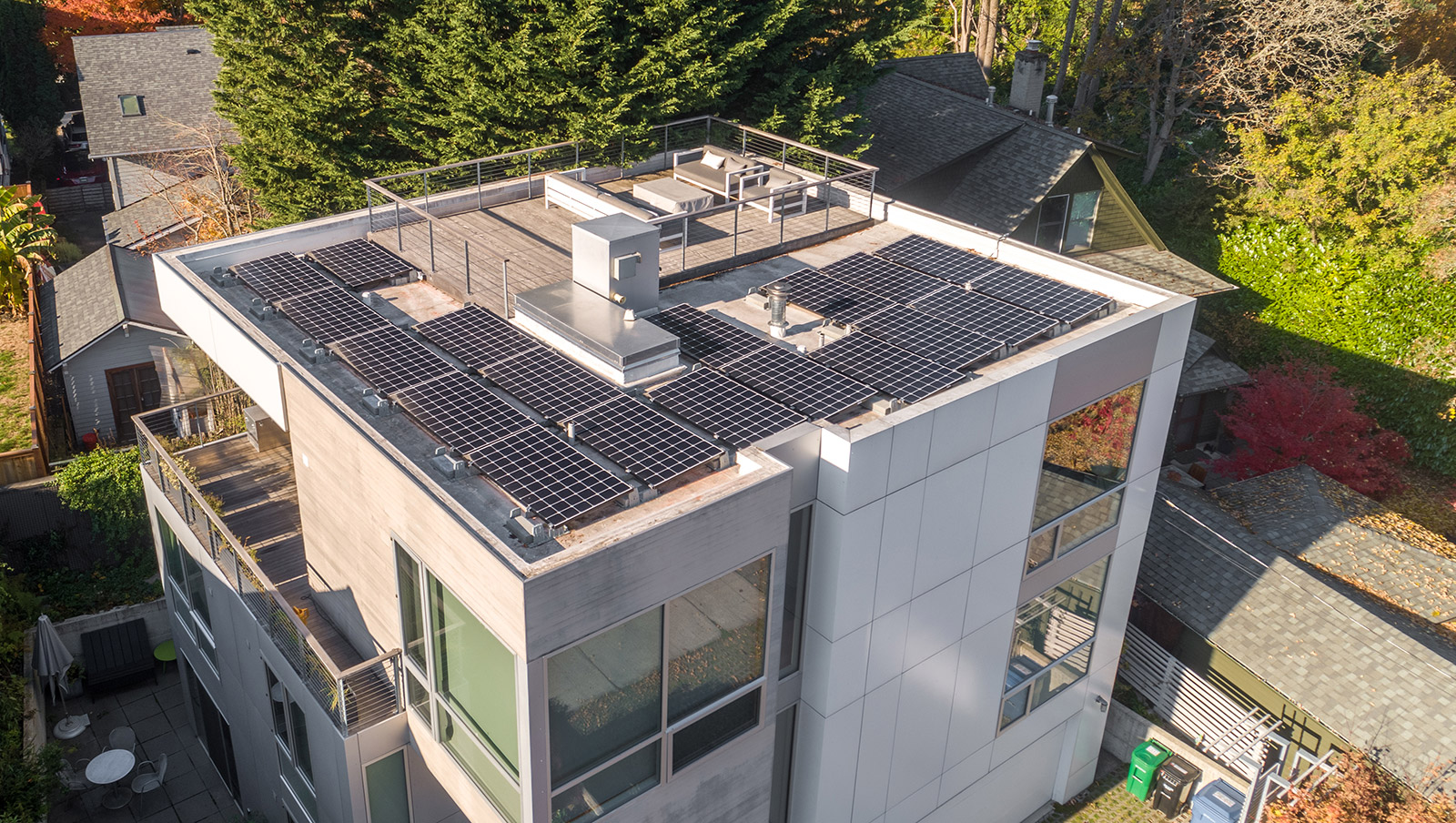 If solar technology is intended as a future phase for new construction, one further recommendation is to include the electrical lines from the garage (or intended location of the system controls and potential battery) to the roof. This allows for thoughtful placement of the electrical lines and ease of installation later. It’s also very cost-effective to add this to an electrician’s install package. 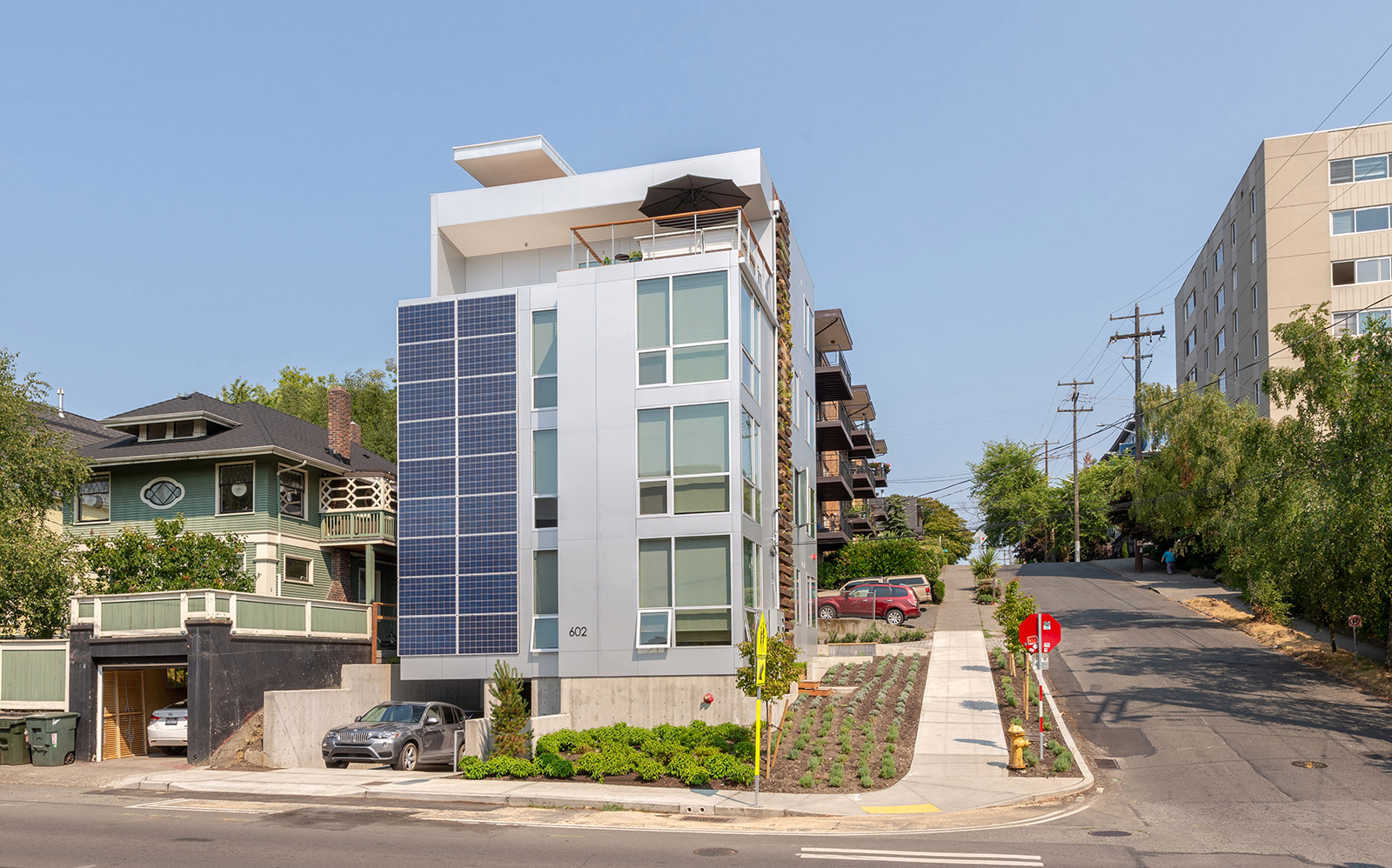 602 Building
At the small multi-family scale of solar applications is this four-unit apartment building designed, built, and completed by BUILD in 2018. The vertically oriented solar panels become part of the rain-screen siding of the project. The assembly includes 18 solar panels made by Trinasolar, and while their vertical orientation compromises the output, the system still has a decent payback cycle of about 15-years. 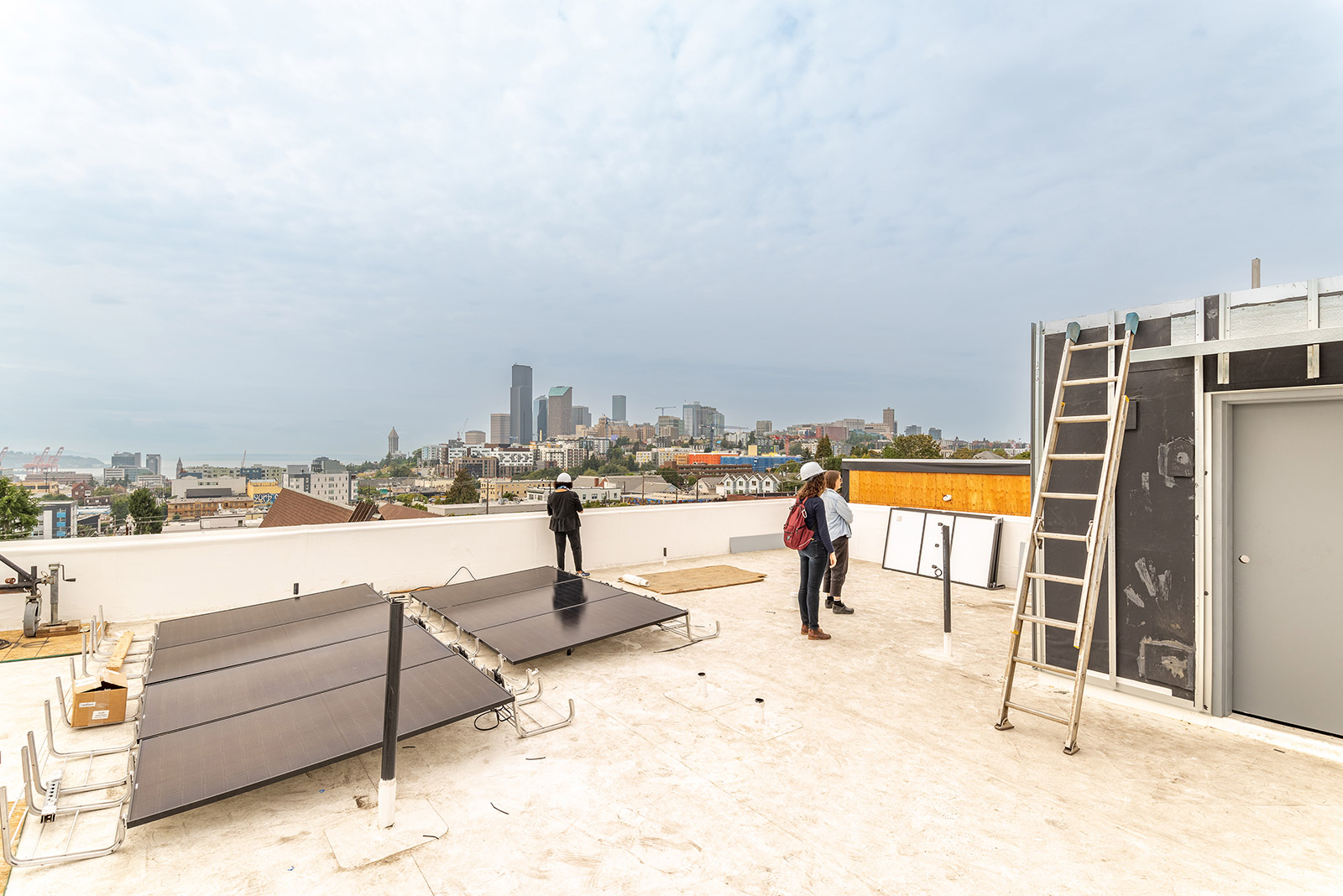 King Street Flats
A mid-scale multi-family example is BUILD King Street’s Flats project in Seattle’s Central Area. The project uses Rec Twinpeak 4 Black Series solar panels with Enphase IQ7 microinverters provided by NorthCoast.  A Unirac system holds the panels in place with ballast so that the system doesn’t rely on puncturing the single-ply roof membrane. This system is currently being installed, and we’ll circle back with the performance data in the future.

For an exceptional explanation of the critical need to decarbonize and support the Net Zero 2050 goals can be found on the Ezra Klein show here.