Navigating the Hills of Affordable Housing; An Interview with Architect David Baker 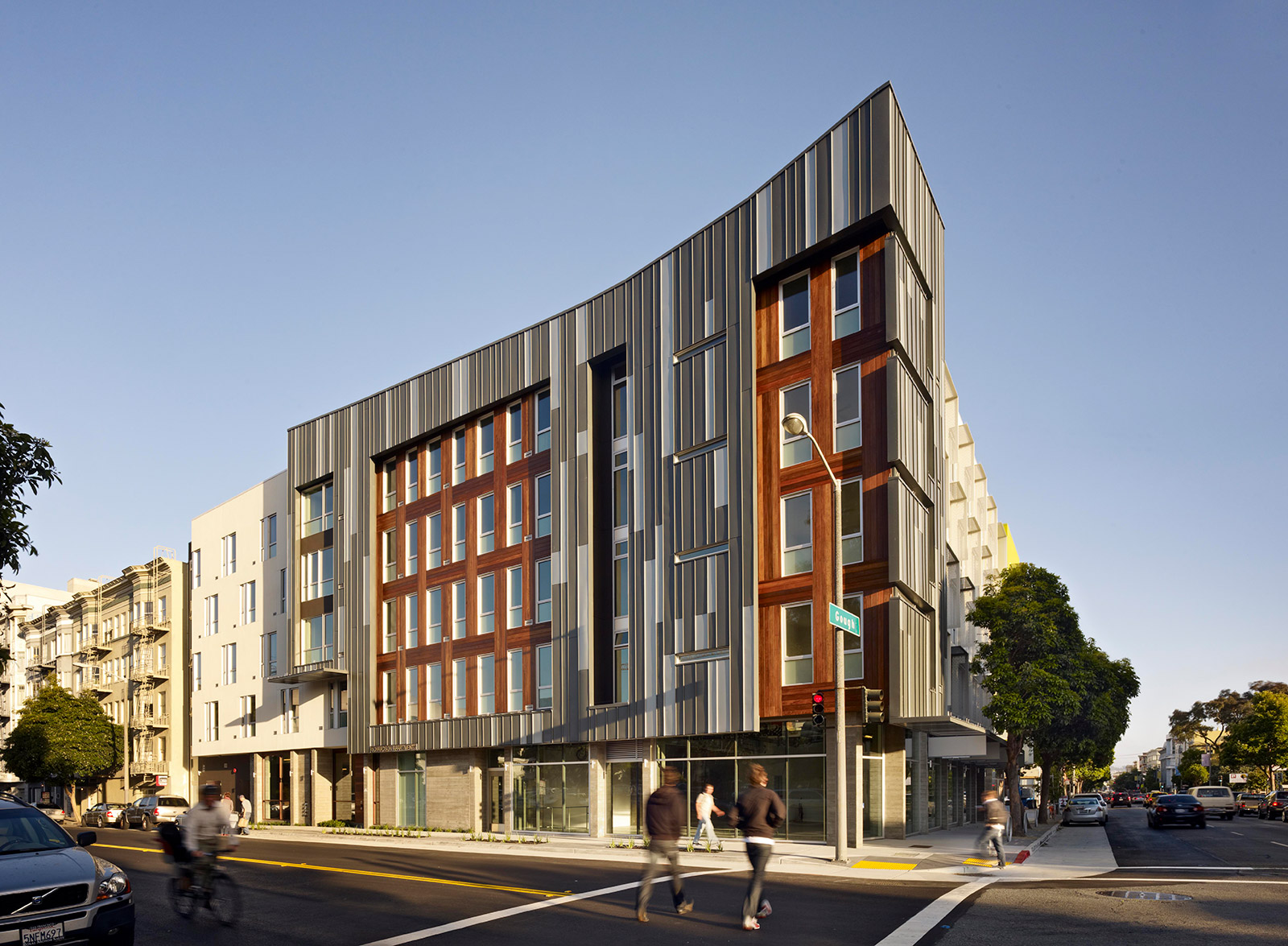 In May 2013, BUILD sat down with the San Francisco-based architect David Baker when he was in Seattle to speak at the University of Washington (UW) Department of Architecture. Honored as one of the thirty most influential people in the affordable housing industry, David’s work has received myriad architectural design awards and honors. With his breadth of experience living and working in San Francisco, we got a peek into David’s path toward and passion for affordable housing and urbanite living. We hope you enjoy this interview from our archives.

What’s it like being asked to speak at UW, a school that didn’t accept your student application?
It’s pretty funny, isn’t it? When I applied, I was in transition—I was a total hippie. The world was going to change, and it did, but in a different way than I was expecting.

Before applying to graduate school, I attended a free school in western Michigan that didn’t give grades, but I had to build a house as part the program; and strangely enough, I also got a union carpenter’s card. One day I went down to the union hall because they were hiring, and I told them I could do the job. I didn’t go through an apprenticeship—I just showed up on-site knowing next to nothing. That was my theory: Why let ignorance stop you?  I think I know more now. I hope.

A few years later, I met with the dean at UW; I had a nifty portfolio, as I had done a bunch of interesting things, which he thought was great. But while I had good test scores, I had no grade point average from western Michigan, and the UW graduate school didn’t accept me. In the modern education system, people become good students, but it’s important to remember that academic life ends at some point.

Considering the stiff competition, how did your firm get its start in affordable housing?
While in architecture school, I joined a couple of friends from the University of California Berkeley to participate in a student design competition for an office building with housing. We spent all summer on it and came in second place. The firm judging the competition liked our work and recommended us for a project in San Jose. It turned out they needed energy consultants, not architects, but we took the job anyway. There was a housing component along with the project, which got us in the door.

After that, I started my own business and worked as an energy consultant for a few years straight out of school, which was a really dumb thing to do—you don’t know how to run a business straight out of school, and you likely haven’t apprenticed. It’s better to learn from someone, which is what IDP is all about. There also wasn’t any certification for the energy consulting we were doing, and people could figure out pretty quickly how to do it on their own.

Later, I spun off and designed cafes, eventually gaining a reputation as a cafe and small-retail architect. Around that time, affordable housing was undergoing a transition. Under President Reagan, government-run HUDs ended, and went into the hands of private non-profits, which established a tax credit for affordable housing. This benefited non-profit developers, who operated in the private sector. They were much nimbler and market-driven, while HUD housing was expensive, encumbered by regulations, and had few quality-driven goals. Because the developments were so awful, nobody wanted HUD housing in their neighborhoods. The Bridge Corporation, a non-profit developer, started talking to some architects who worked on affordable housing projects; they negotiated great fees for the work, and paid the architects well, but the architects weren’t allowed to design any unnecessary elements into a project’s program, such as balconies.

The developer eventually talked to me, and because I was innovative and less expensive than others, I was hired. After a couple of projects, I was suddenly an expert at multi-family work, which wasn’t my plan, but simply an opportunity that arose. For a while, multi-family housing was sort of looked down on in the architecture profession, but it’s a very important housing type. It’s significant to the urban fabric, and it’s uplifting that the notion of good design in multi-family housing has come back. 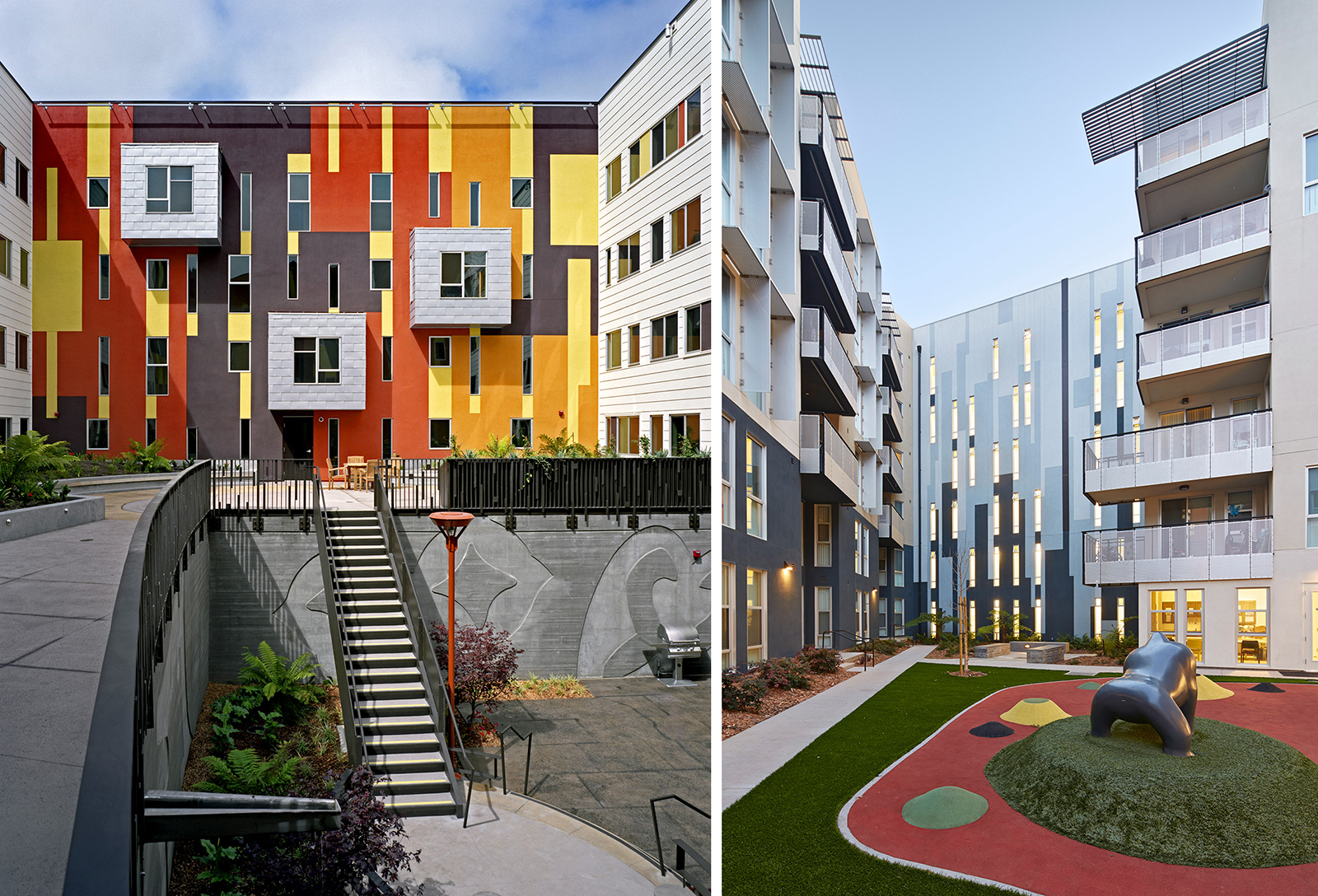 What actions should a young firm take to be competitive for affordable housing work?
It’s just like anything; in cities, marketing and community engagement are the same thing. Find your local non-profit or advocacy organization and serve on the board of directors. The other way to do it is to work for a firm that designs affordable housing and then spin off your own practice when you’ve established client relationships.

Some of your work includes living spaces for the homeless. What is it like to design for those who previously did not have spaces to call their own?We have a key giving ceremony, and at the Richardson project, there was a seventy-year-old man who was given his key. He looked at it and said he had never had a key before in his life, and he burst into tears. The experience can be quite profound. 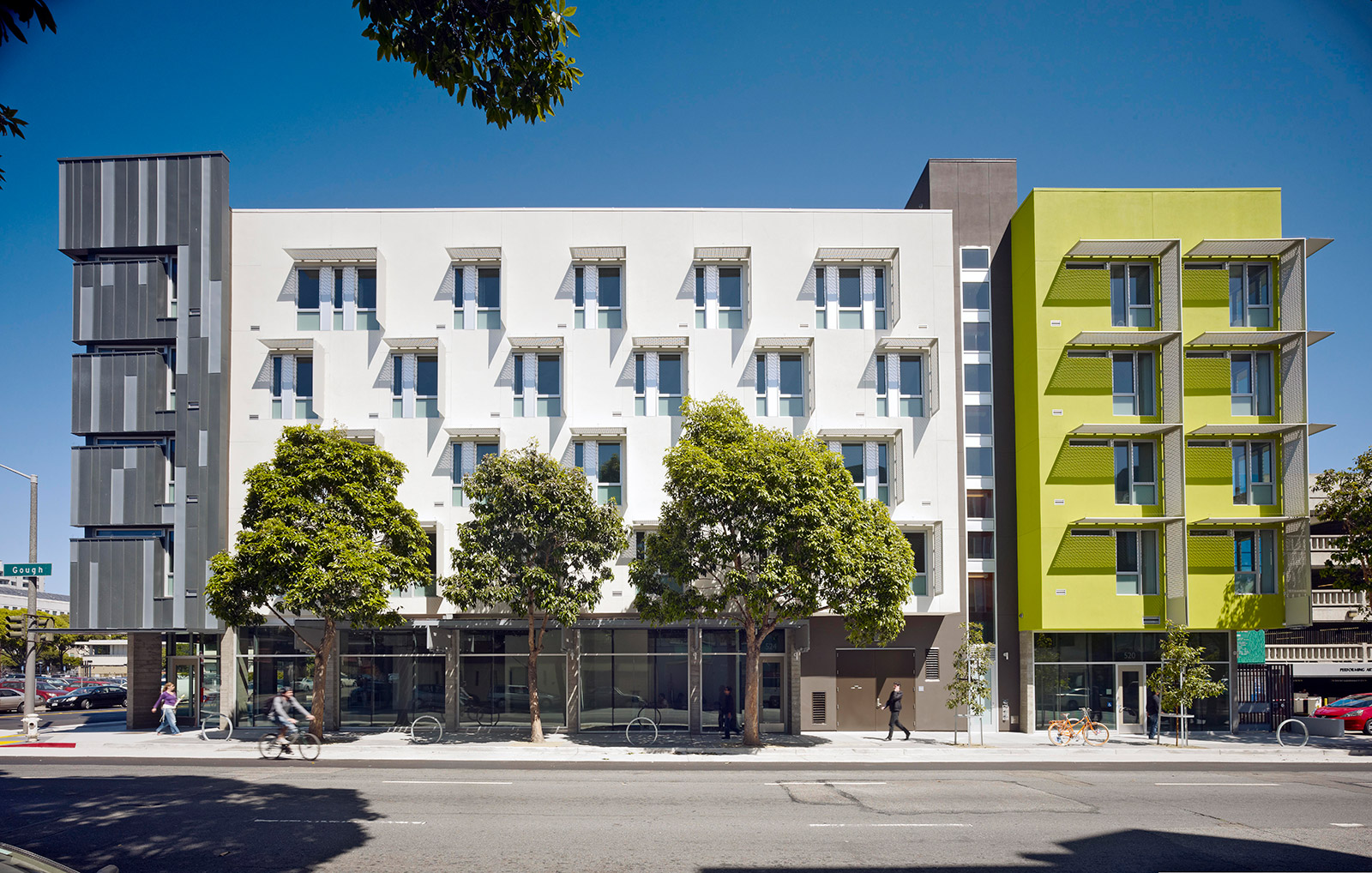 Your website highlights data that includes a project’s density, the parking per unit and square footage allocated to daycare facilities. What measures are most indicative of a successful project?
Every project is a really complex story, and we’re constantly trying to raise the bar. People used to think we were insane for advocating that retail spaces be located under housing, and now it’s the norm. We’re currently confronting the amount of parking required of most projects. There are other things to do to a building besides put parking in it. It’s not only expensive, it includes an opportunity cost. Even when the parking is underground, the ramps, gates, and garage doors create unpleasant experiences and detract from an active, urban streetscape. The question is—how long will we keep doing this? In ten to fifteen years, people will ask why we put in all these garages. On too many projects parking is equated to essentials like food, water and air. “If I don’t have a parking space, I will die!“—which is untrue.

There’s been a lot of recent media attention on micro-housing, in NYC and other major cities in the United States. You’ve built several of these projects in San Francisco. Is there a density tipping-point at which micro-housing becomes effective? Is it a model appropriate for all cities?
Every community has people for which micro-housing makes sense. They’re good-sized units compared to world standards. San Francisco’s Chinatown has 50-square-foot SROs (single-room occupancy) that are used for family housing—and a lot of those folks would probably be unhappy in larger places.

In addition to the cost savings of a smaller space, it’s also about making a mental shift. This idea that a suburban home is “better” rides on the assumption that people who live in them love to go to Home Depot and spend their weekends doing yard work. Having a house with a yard requires spending a lot of time and money taking care of it. Living in an apartment, you don’t have to do that. 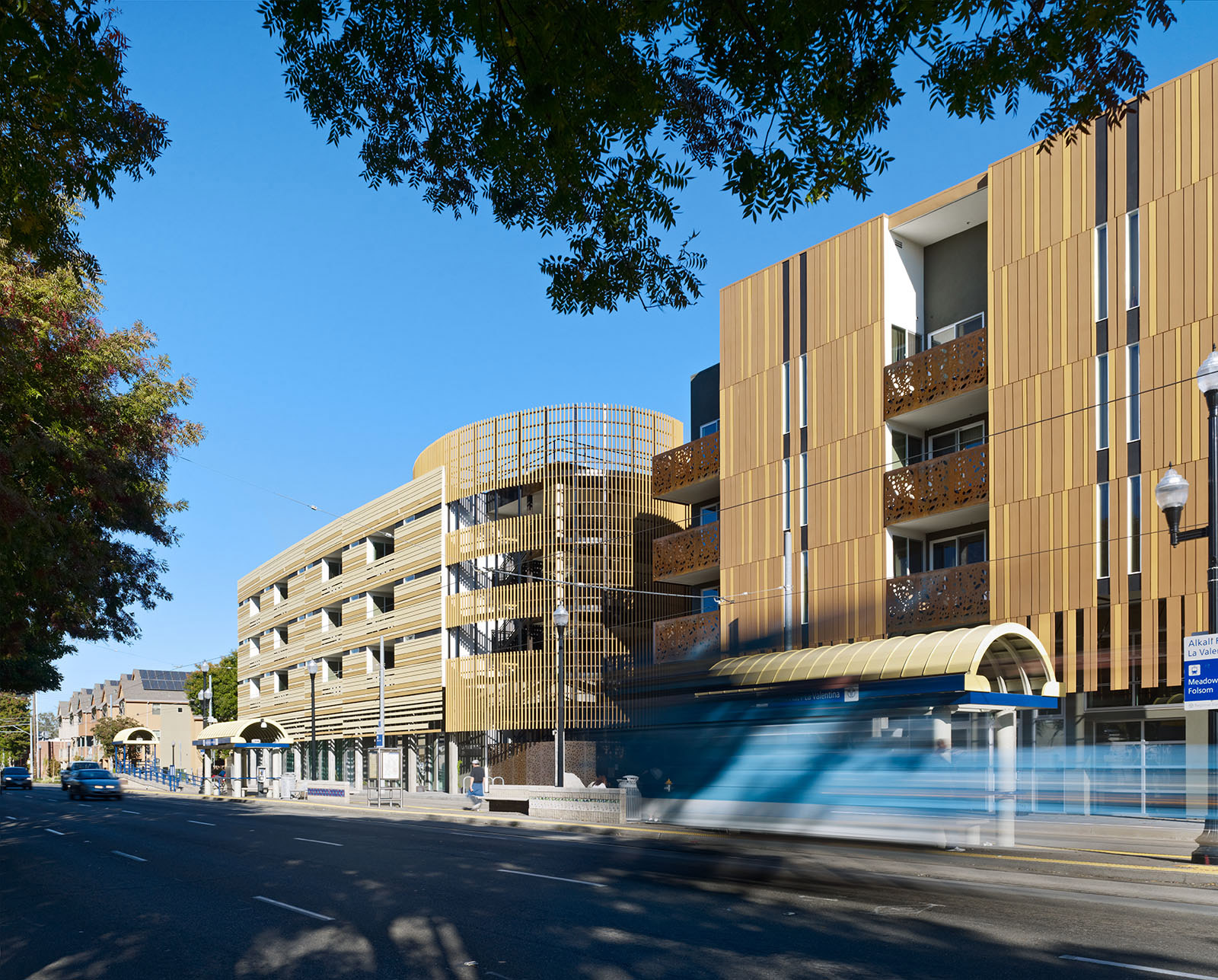 Do the American suburbs have a future?
I think the suburbs are great. But they’re a less desirable product, from a capitalistic view point. People are paying less to live there because it’s not as desirable. An apartment in the city versus a suburban house—which is better? It’s a moot discussion. Each have good qualities. And maybe people move to the suburbs because they want gardens, but in the cities, even that’s changing. Seattle’s a leader in the biophilia movement.

As a self-proclaimed bike expert, how are we doing in Seattle as far as bike lanes and public transportation go?
My impression of Seattle is that you have to be fairly hardcore to bike here. People in San Francisco think the hills are an issue, but they’re more like bumps. Unless you know somebody at the top of a hill, you never have to go up one, whereas here in Seattle, you have to climb. Cyclists have all the gears, they’re prepared for rain, they wear reflective jackets, and the distances they travel are a lot greater. We rode up from the Ace Hotel to have dinner at a friend’s house, and it was a forty-five-minute ride. In San Francisco, there are no forty-five-minute rides, which is crucial for most cities. In Amsterdam, for instance, property values decrease beyond a five-minute bike ride from Central Station. The Dutch don’t have a bunch of gears, special biking clothes, and a really nice bike to ride around for twenty miles. Because they’re only riding a mile or two on average, they can wear normal clothes.

What’s on your nightstand? What are you currently reading?
The Inspector Chen Series by Qiu Xiaooong, which is a scholarly whodunit set in 1990s China with all of its dichotomies.

David Baker founded San Francisco-based David Baker + Partners in 1982, and in 1996 was selected as Fellow of the American Institute of Architects. His firm has gained a reputation as an award-winning, sustainability-minded office where drivers are outnumbered by cyclists.