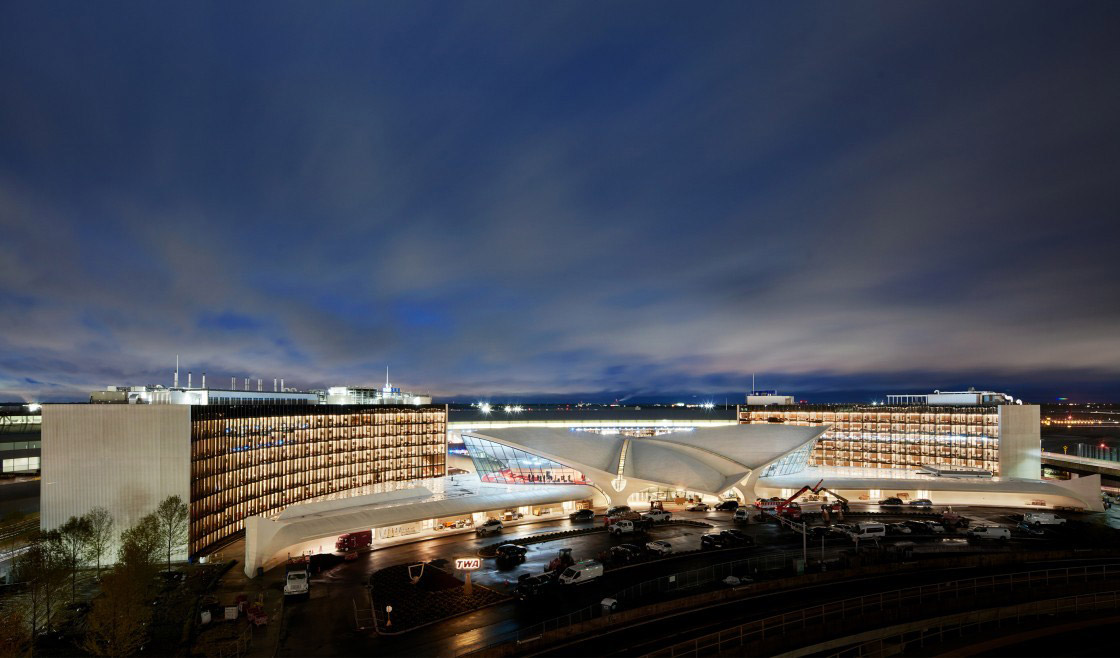 We studied it in school, we’ve referred to it over the years with reverence, and it’s been on our must-see list since it reopened in 2019. The TWA Terminal’s swoopy lines, swanky interiors, and elegant furnishings had us at hello, decades ago. Designed by architect Eero Saarinen and constructed at JFK airport in 1962, the original TWA Flight Center building operated until its closing in 2001, at which point it was protected from demolition by the Port Authority of New York and New Jersey via a 1994 landmark status. In 2008 it was incorporated into an expansion of Terminal 5 for Jet Blue Airways, and in 2018 it was refurbished and supplemented with two bold but carefully situated towers that host the well-appointed TWA Hotel rooms. Between the towers and adjacent to the Flight Center on the faux tarmac is a classic Lockheed Constellation L-1649 Starliner, which has been preserved and outfitted with the Connie Cocktail Lounge (try the bourbon based Eero Dynamnics). 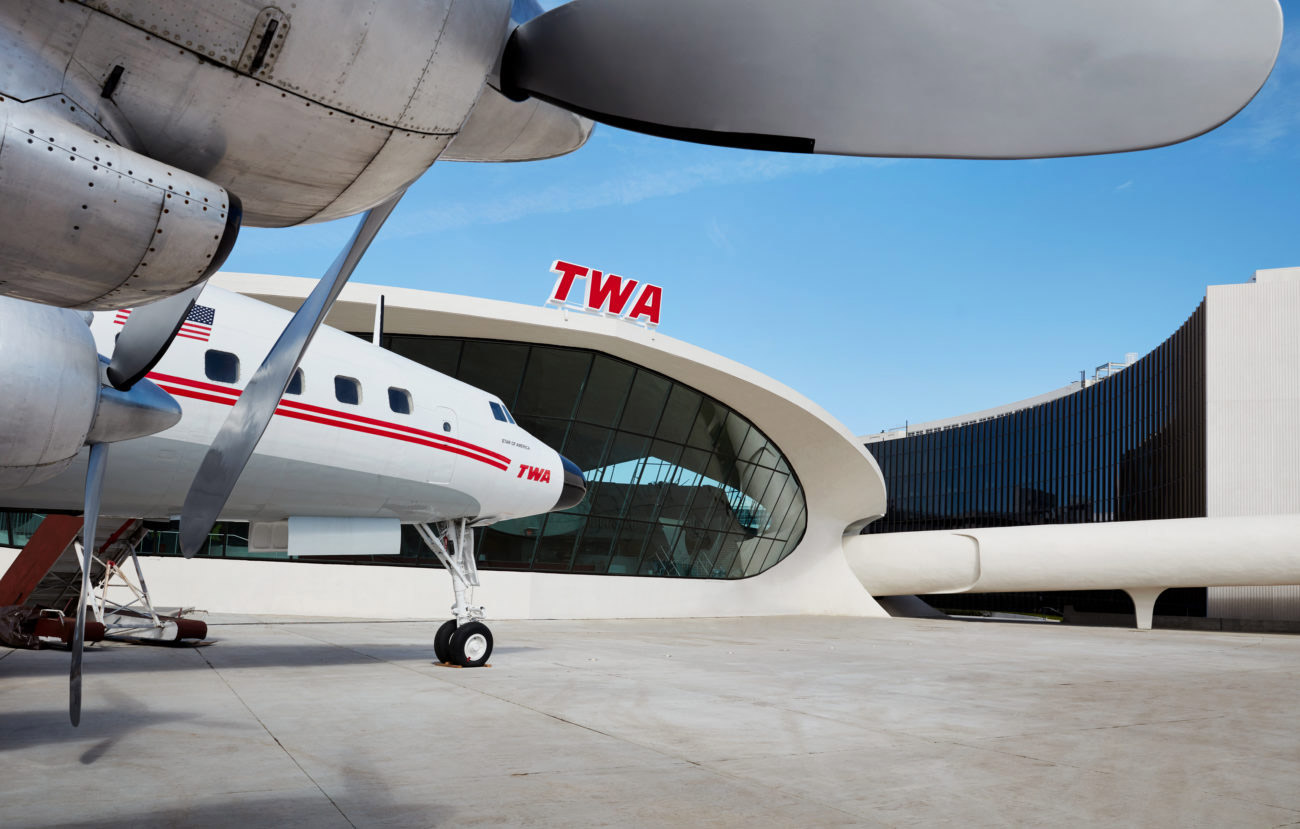 Situated in the heart of Terminal 5, the TWA Hotel is the crown jewel of JFK airport. It’s also the eye of the hurricane—while anxious travelers rush to their gates, impatient lines of soon-to-be passengers wind around endless TSA mazes, and buzzing planes lift off and land on all sides; the TWA Hotel is the calm within the storm. In our harried society of improbable timetables, overreaching security protocols, and inadequate legroom, each of the TWA lounges offer the weary traveler a welcoming Tulip Chair, a gin martini, Sinatra echoing in the background, and as much peace and quiet as the schedule allows. It’s all just so damned civilized. 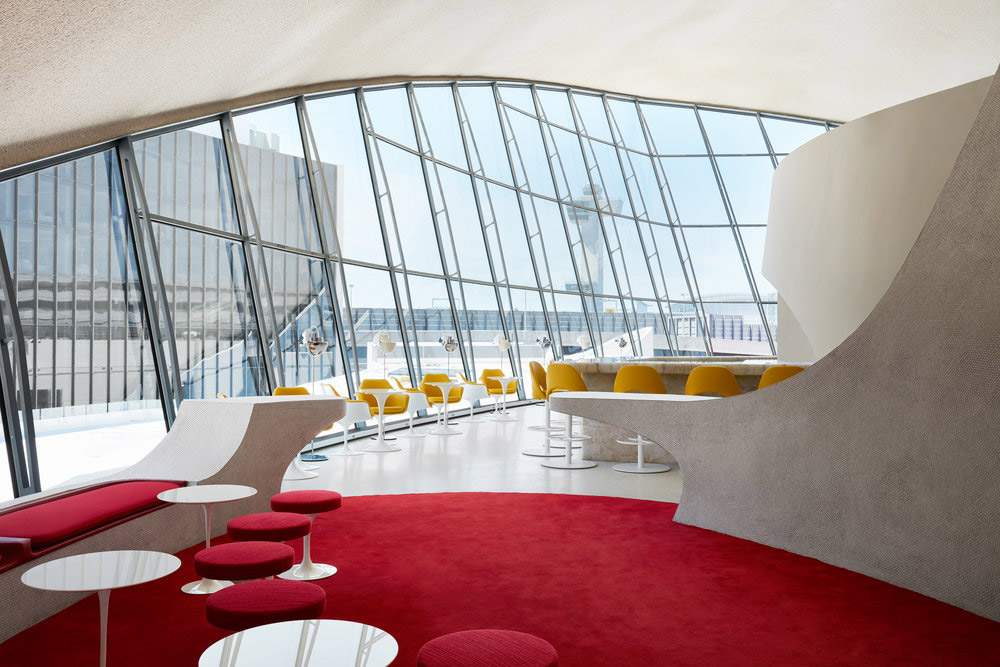 As modernists and preservationists, we feel it is critical to build new projects with modern materials and methods, and significant historic projects should be properly protected and preserved. Moreover, when artfully executed, this philosophy of design produces wonderful, creative, and functional adjacencies between the modern and historic. With this in mind, the TWA Hotel might be one of the most important buildings in America right now. Every move was thoughtful but bold, careful yet ambitious, considerate but audacious. It sets the example. The effort also extends well beyond design. Everything is curated in this environment from the playlist and acoustics of the space, to the menu at Paris Café, to the drinks at the Runway Chalet at the Pool Bar (try the Mile High Margarita). Oh, did we mention the rooftop pool? There’s a 95-degree infinity pool and alpine themed lounge on the roof of the Hughes Wing, with a commanding full view of the JFK runways. Needless to say, it provides one of the most bizarre adjacencies we’ve seen in our architectural careers. 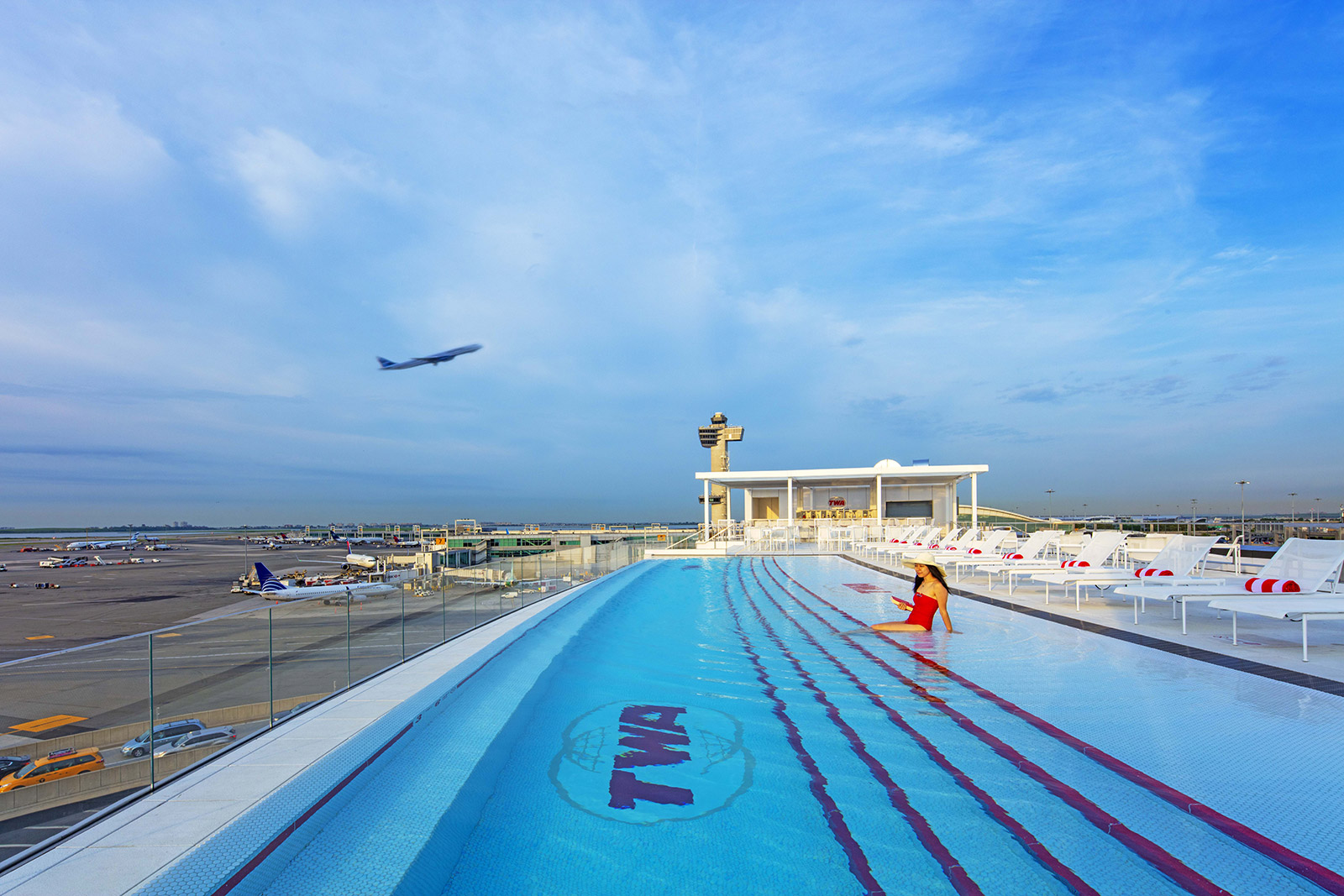 The project was masterminded by Morse Development, who brought an extraordinary vision and developed the site along with MCR. The careful refurbishment of the original structure, along with myriad clever design additions owes a debt to the architecture team at Beyer Blinder Belle, and the engineers at ARUP. A pair of new six-story hotel towers (the Hughes and the Saarinen) accommodates 512 rooms, and are the product of Lubrano Ciavarra and Stonehill Taylor, creators of some of the most handsome hotel rooms we’ve ever had the pleasure of staying in. 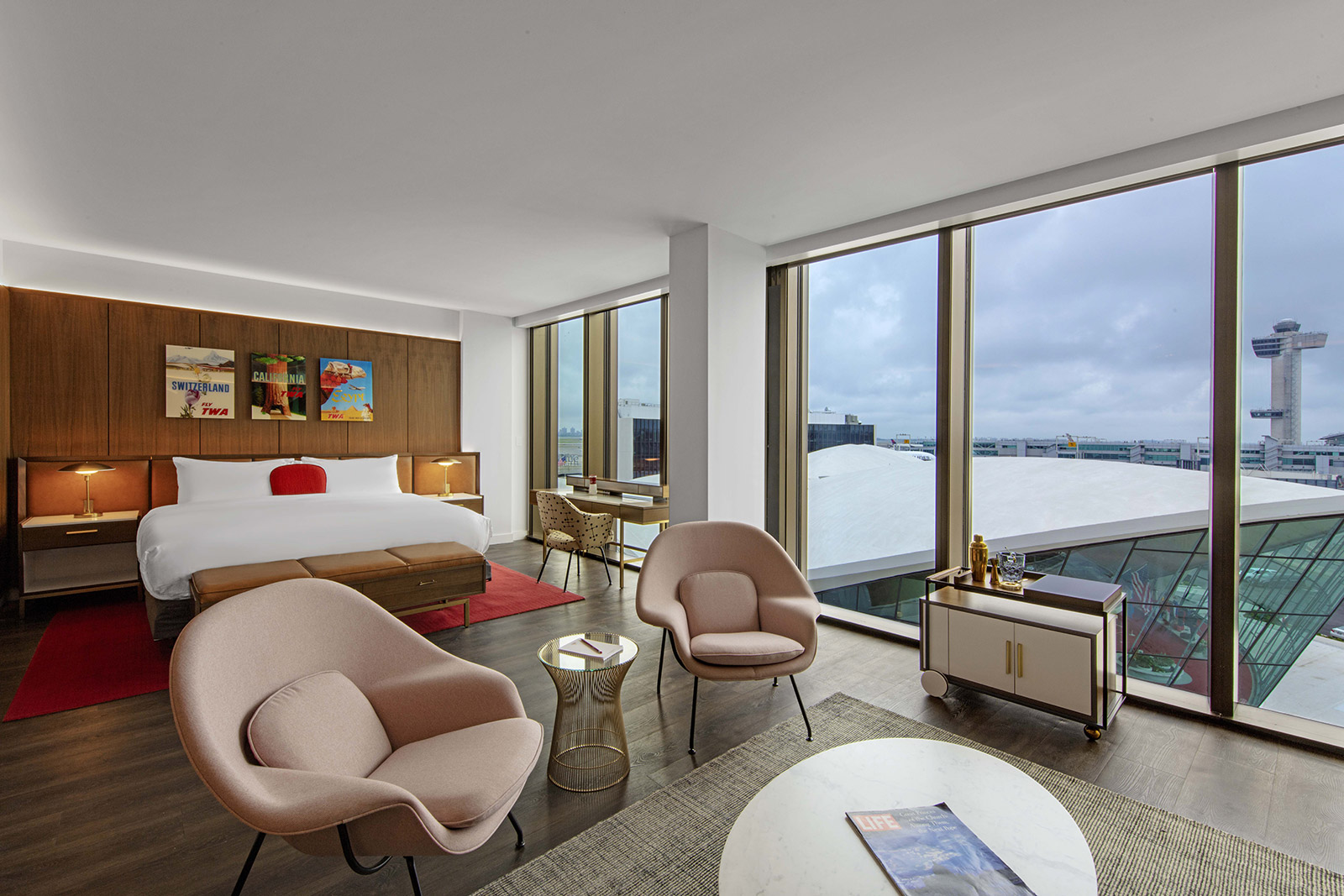 We love this quote from Lubrano Ciavarra and Anne Marie Lubrano:

“I consider [the TWA terminal] the sexiest building on the planet. How do you add to this gorgeous sculptural, figural building? For a small firm to be given a commission like this, you want to do the most spectacular thing you could ever do in your life, but we needed to leave our ego at the door.” 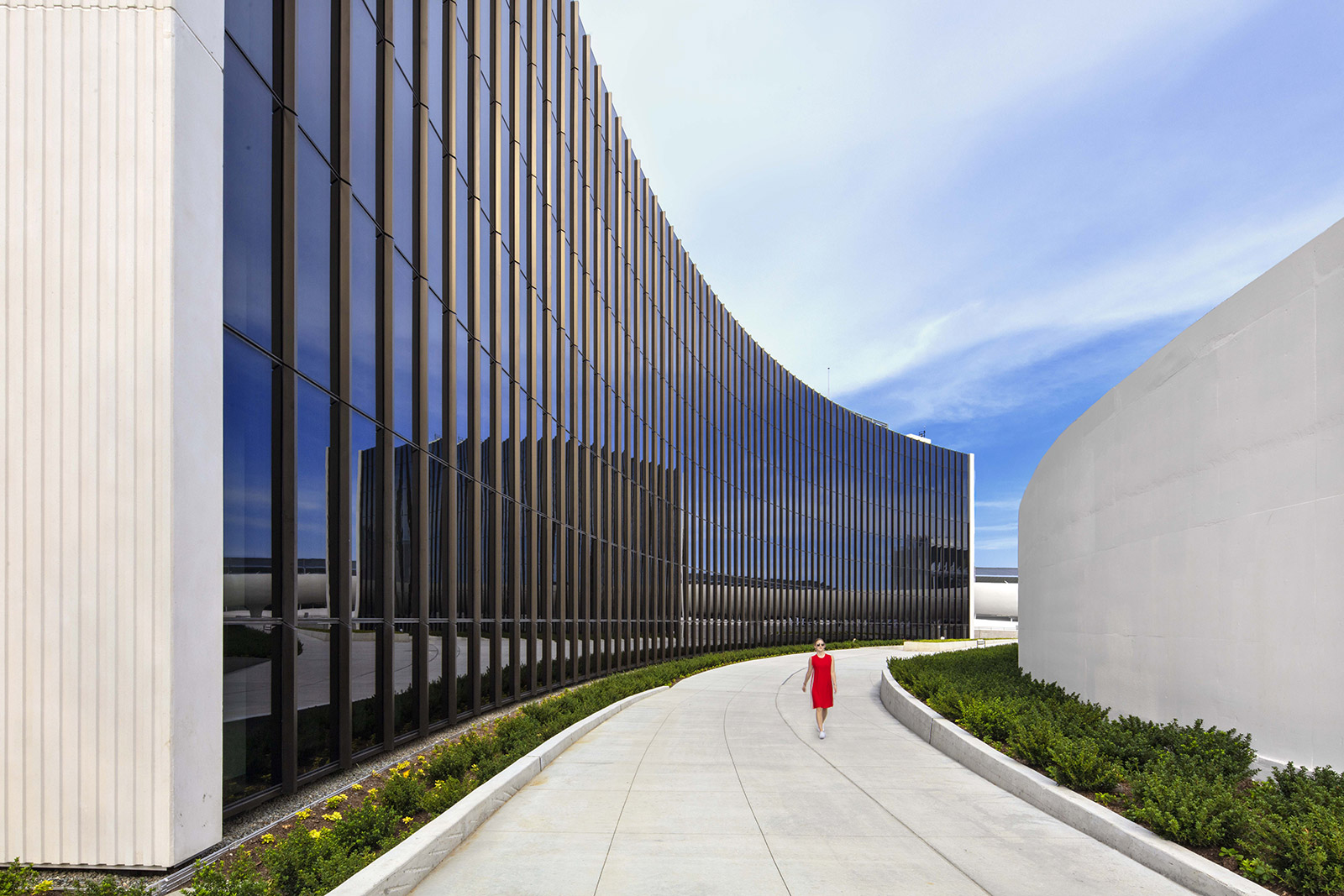 Underground, 45 meeting rooms and a 7,000-square-foot meeting hall, designed by INC Architecture and Design, perfectly complement the original aesthetic. The carefully concealed systems (heating, air conditioning, electrical, plumbing) should not be overlooked, and what must have been a very challenging design problem was expertly completed by JB&B. Wrapping it all up and delivering an extraordinary end result was the Turner Construction Company. 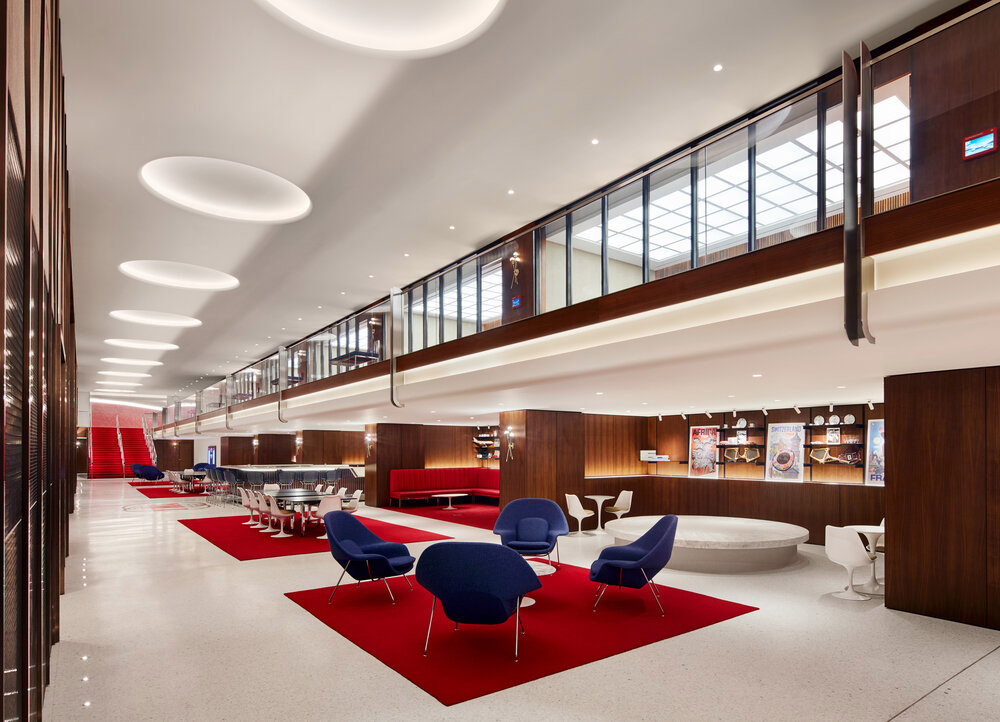 The extraordinary architecture, interiors, and context would not be properly understood, or nearly as widely appreciated without the masterful work of photographers David Mitchell and Eric Laignel. The images of the TWA Hotel are sublime and we highly recommend viewing more of their portfolios via the links above. 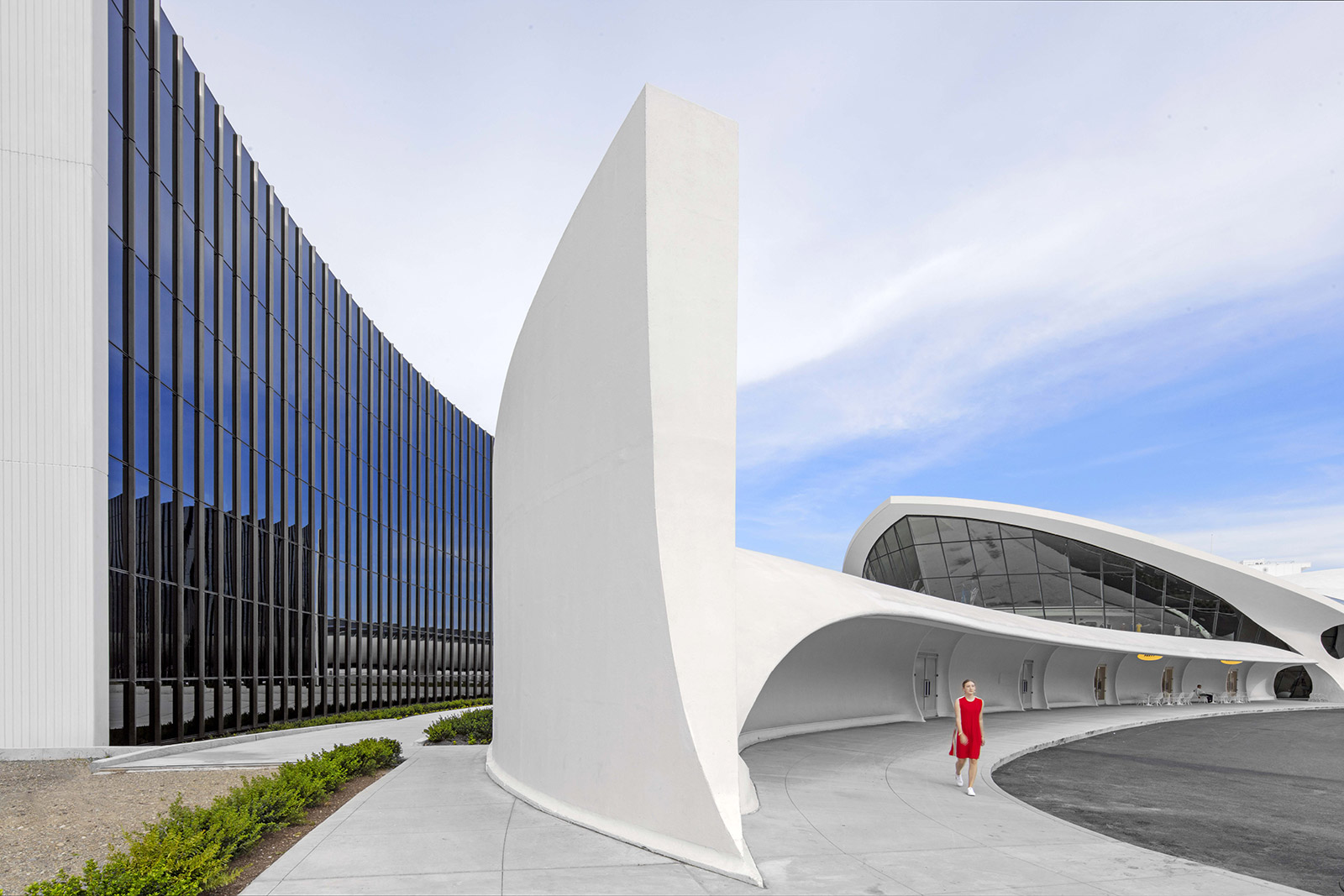 It would be a shame to conclude our euphoria of this project without documenting a handful of fascinating factoids for all of you like-minded design nerds out there. Enjoy: 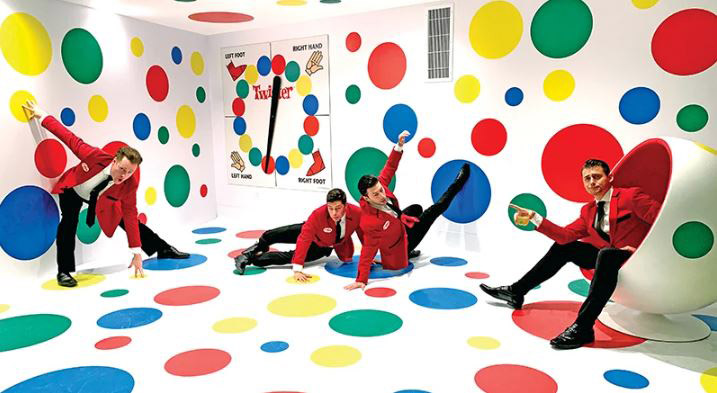 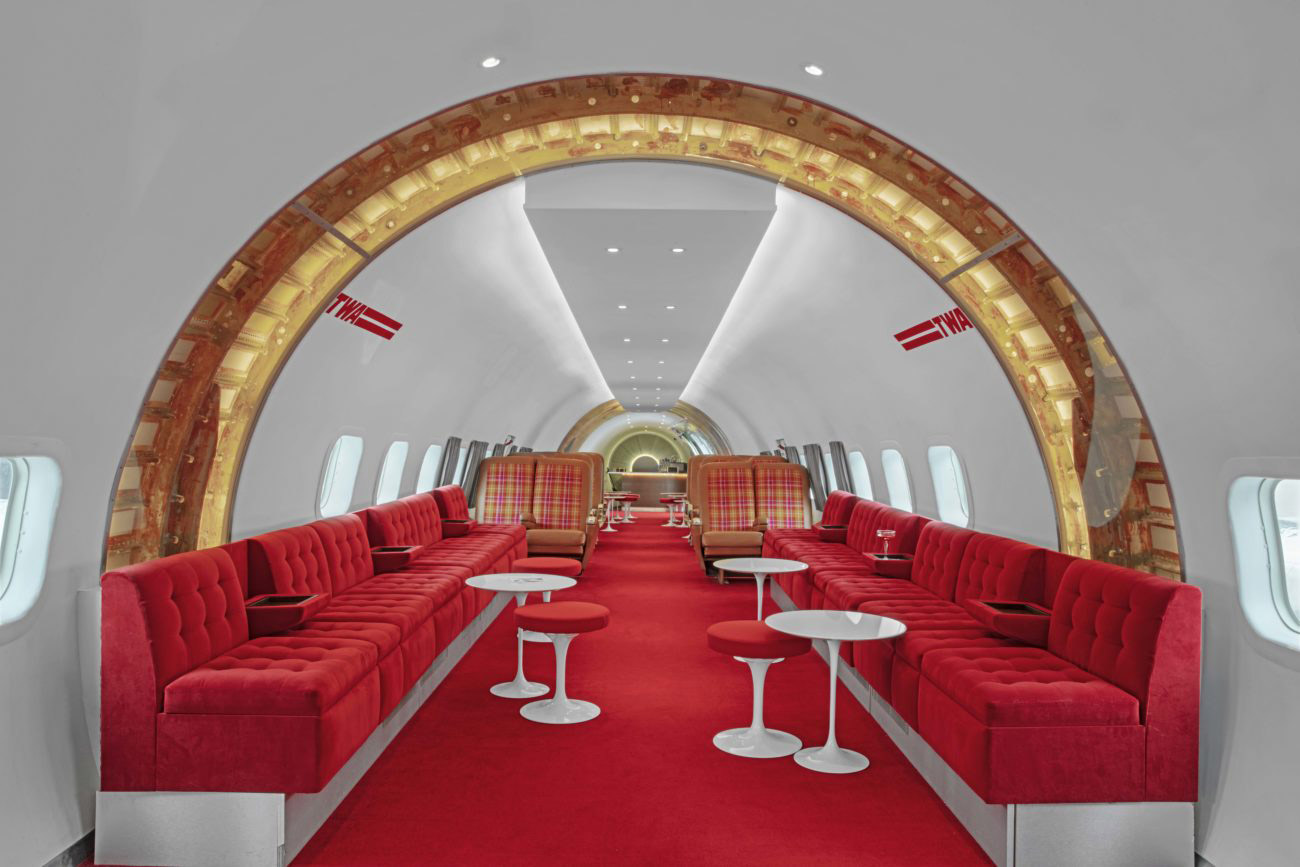 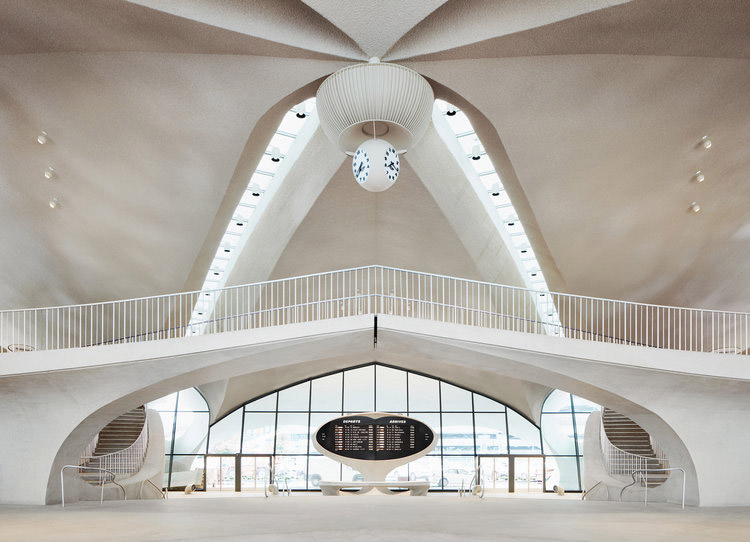 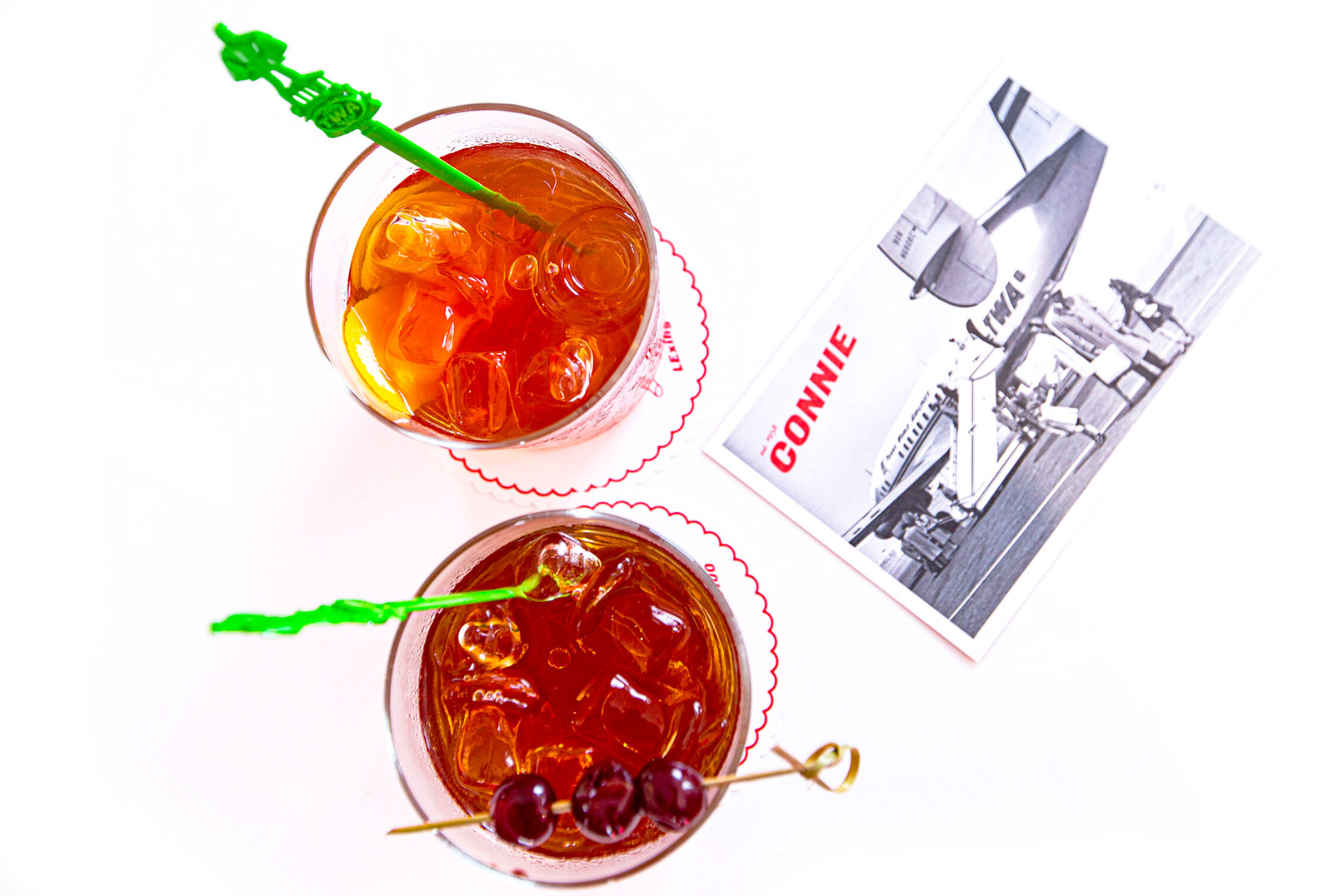