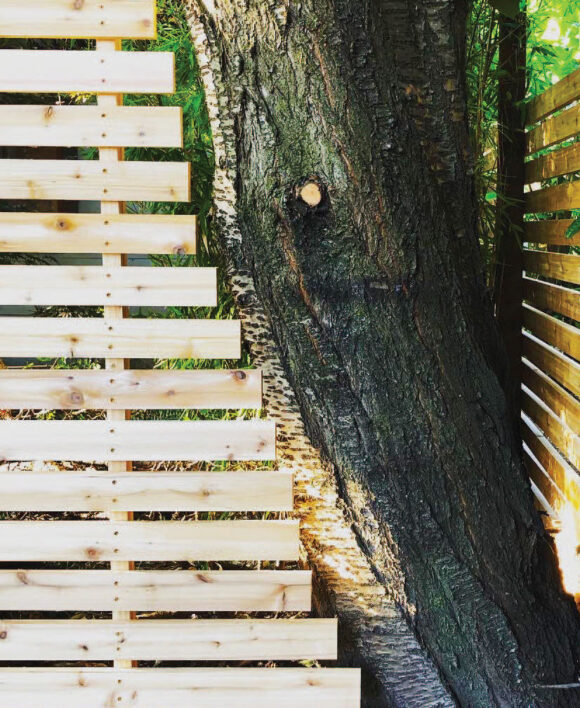 This summer, BUILD met with Josh Petter, an ISA Board Certified Master Arborist who works at Tree Solutions Inc in Seattle. We talked about the intersection between natural and built environments, how architects could work more closely with arborists, and what’s next for Seattle’s tree code.

Let’s start with a softball: Why is it so important to retain urban trees?
The benefits of trees in a city can be summed up in three categories: social, economic, and ecological. Socially, trees provide a number of mental-health benefits, such as decreased stress, and increased hospital recovery times for patients who have a view facing trees. Economically, shopping areas tend to have more foot traffic if they contain trees—Seattle’s University Village is a good example of that. Another economic benefit is when a tree shades your house in the summer, it reduces your cooling costs, which increases property values. Ecologically, trees provide habitat for a multitude of species and help keep cities cool. During the heat wave in the Pacific Northwest last summer, there were many more heat-related deaths in poorer neighborhoods with fewer trees; this is called the urban heat island effect.

If we can all agree that urban trees are important, how do we balance our cities’ needs for more affordable housing, and therefore more development, with the benefits of retaining trees?
We can build affordable housing, but it has to be livable housing. We don’t want to clear-cut the city and house people in an inhospitable landscape; we do want to provide a balance between development and retaining green spaces. It shouldn’t be an either/or situation, but a balance between green and grey infrastructure. For example, there should be incentives in the building code that allow for taller buildings in a given zone, or a reduction in the number of required parking spaces if the developer is saving a number of trees on their lot. 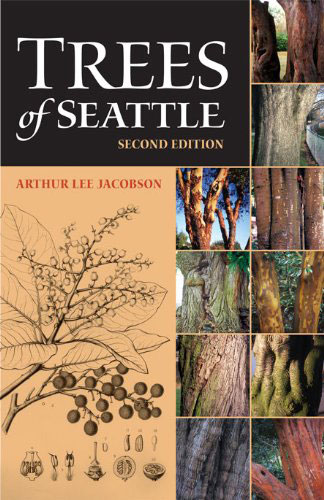 It sounds like the Seattle Building Code needs to be updated if saving trees really is a priority in our city. What are the main issues with Seattle’s tree code?
Seattle’s code is better than those in other jurisdictions, although there’s plenty of room for improvement. Currently, exceptional tree rules in Seattle are largely based on one book: “Trees of Seattle” by Arthur Lee Jacobson. This book was never intended to be used to base regulations on; it’s difficult to interpret and exceptional tree sizes vary considerably across different species. In July 2020, the SDCI issued a new Director’s Rule13-2020, which increases protection for trees, and I think it contains some good changes. This rule will streamline the exceptional tree size, which was much more varied and inconsistent previously (now most trees will be exceptional at 24” in diameter, measured 4.5 feet above the ground).

In addition to classifying exceptional trees, what are some other improvements to the code you would like to see?
I would like to see more provisions that incentivize developers to save trees. Currently, there are rules in the code that allow a reduction in a property line setback when saving a tree, but they’re not very clear—and many architects and builders don’t even know about them. I would also like to see more deviations, such as increasing building heights, reducing parking, reducing sidewalk widths, and gaining more credit for stormwater mitigation, all to incentivize the retention of existing trees. In those situations, everyone feels like they win. The tree gets saved and an equally large or interesting building is created.

Lastly, while trees that aren’t exceptional are only slightly regulated, you’re still only allowed to cut down a finite number of them each year. I would like to see a program that mandates for every non-exceptional tree that gets removed, $200 is given to a fund that is used to plant trees elsewhere in the city.

From a code perspective, urban trees that are fragmented from continuous forests are more protected than suburban trees.  For example, it’s easier to clear-cut an acre in North Bend to build a single-family house than it is to remove an exceptional tree in Seattle to build a multi-family project. Do you think there needs to be an adjustment to this balance?
Urban trees have more value than suburban trees because there are fewer of them. It’s like any other economic principle: the more limited something is, the more valuable it becomes. For example, there are fewer trees in the city to mitigate stormwater, so removing one has a larger impact than cutting down a number of forest trees. Trees exhibit different growth characteristics and challenges based on their environments. Typically, trees in a densely forested area are competing for resources with other trees, while urban trees are competing with infrastructure. Different communities will have different codes to reflect their development priorities and site conditions, although the end goal should be to balance green and grey infrastructure across the entire landscape.

What are the biggest challenges you face as an arborist in Seattle?
I work with trees and people; trees are easy to predict, whereas people are complicated. The biggest challenges I face deal with failures in communication. Often, arborists are seen as just a box to check on a development project. But when the developer ignores the suggestions of an arborist and doesn’t value their input, it ultimately ends up causing a lot of logistical issues during the implementation phase. Another challenge I experience has to do with how emotional people get about trees; they either love them and want to protect them at all costs, or they see them as a barrier to development and want them all removed. It’s often a polarizing issue when it doesn’t need to be. Many arborists end up in the middle, but strive to be objective and logic-driven. We recommend removing trees when they’re not safe, and retaining them when possible.

Accepting the fact that Seattle is growing, what would you like to see architects doto help protect trees on their project sites?
Engage an arborist early in the process, communicate effectively, and continuously involve them throughout design; we understand the entire process, from permitting to development, and we can be used as an asset rather than observers during construction. I would also challenge architects to use alternative foundation methods, such as pin piles or piers rather than slabs and traditional foundations to help protect root systems. 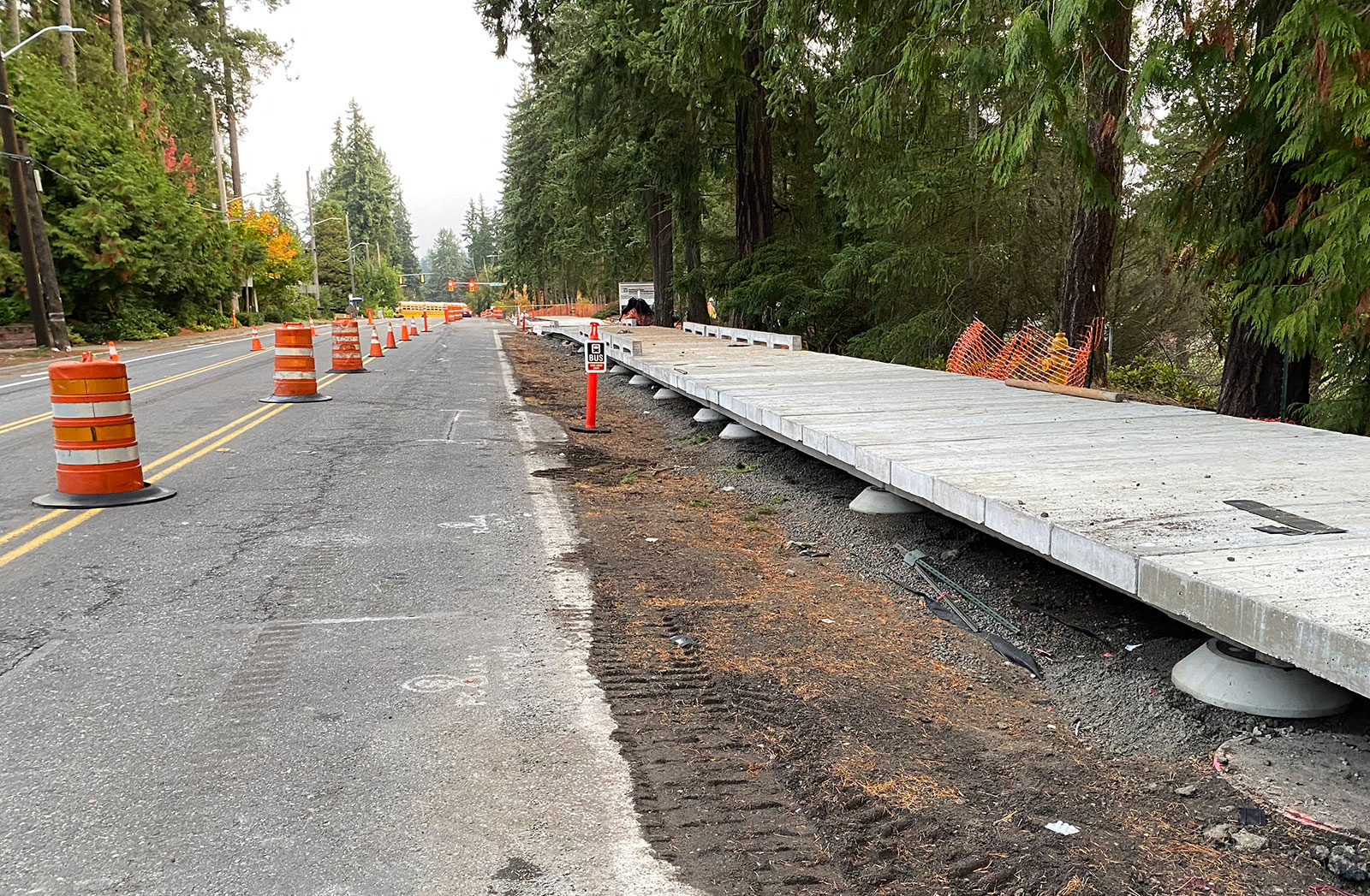 Same question for contractors: What are the main issues you see in the field?
Tree protection fencing is a joke on a lot of construction sites. It’s not maintained very well, or installed correctly, so contractors store building materials too close to trees, which compacts the soil and damages roots. This causes the tree to slowly die after the contractor has finished their work—and because the contractor doesn’t witness the impact this practice has on trees, the process repeats itself on the next job site. Another issue we commonly see in the field is a lack of irrigation during construction. When a site is largely cleared of trees, the remaining trees and soil get significantly more sunlight and heat than they did prior to the site disturbance. This results in soils drying out and microorganisms dying, which results in root death and tree stress. Adding four to six inches of wood chips around these trees, and irrigating them are easy and effective solutions, but unfortunately we don’t see these practices used regularly unless we repeatedly require them. 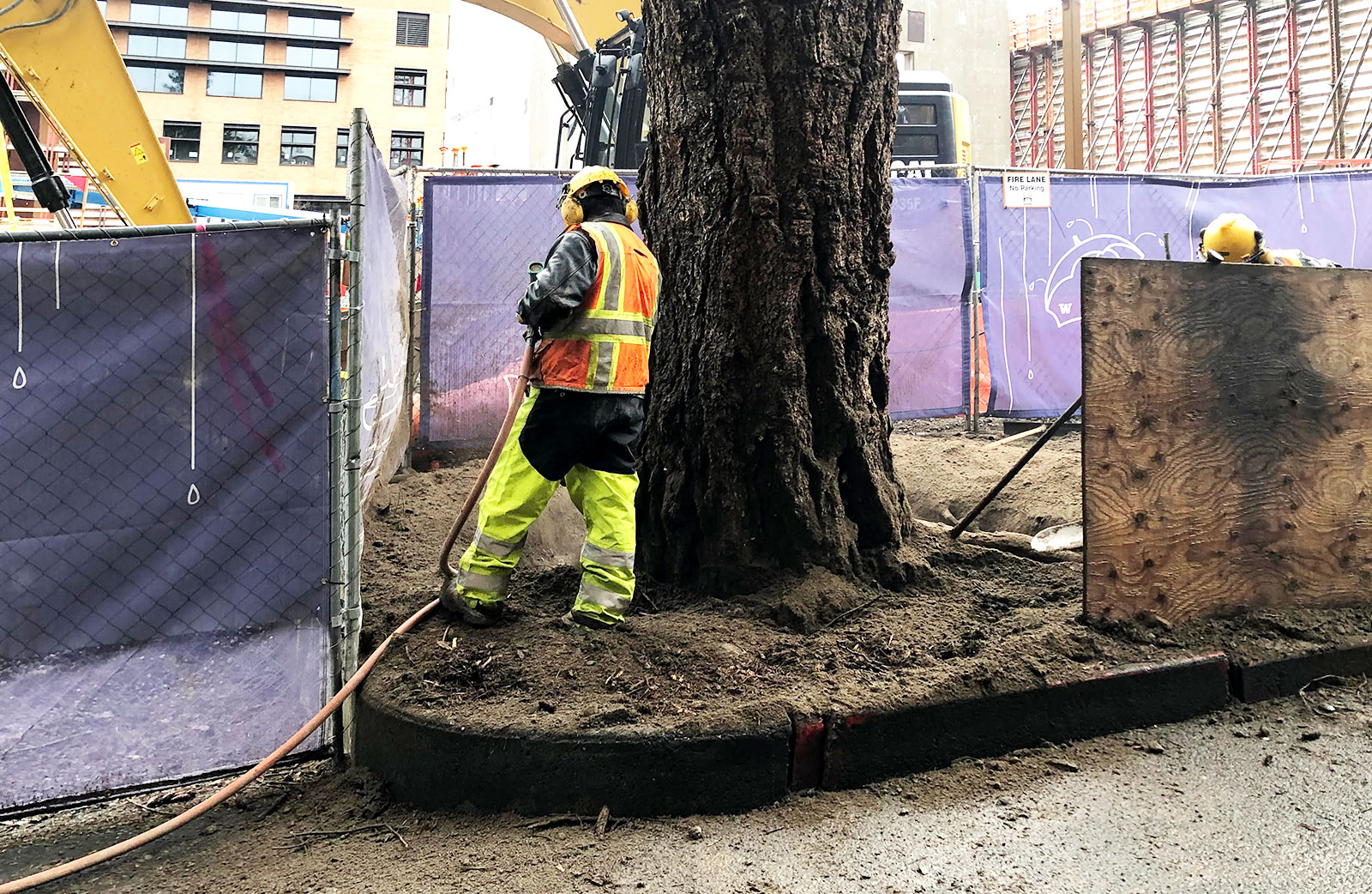 What advice would you give someone who is deciding on what tree species to plant in a newly developed site?
It’s all about having the right tree in the right place—it’s almost entirely dependent upon the site. For example, you wouldn’t want to plant a Douglas-fir in a narrow planting strip, or in an area with overhead power lines because it will eventually overgrow the space. In a bigger area it would be beneficial to plant a larger species in order to maximize the benefits that the tree will provide.

Another factor to consider is pests and pathogens that impact certain tree species. We don’t recommend planting certain elm trees because they are susceptible to Dutch elm disease. Similarly, all of the white-barked birches (except river birch) are susceptible to a pest called the bronze birch borer, which kills the trees from the top down. Poor tree species selection is a waste of everyone’s resources.

Are there any tree species you would like to see more of?
It would be nice to see more evergreens planted to replace the evergreens and conifers that often get removed. They provide a good sense of place in the Pacific Northwest, and are also much better at stormwater mitigation than deciduous trees because they photosynthesize and absorb water year-round. Also, from an aesthetic perspective, they provide color all year.

It would also be wise to think more about climate-resiliency when picking a plant palette for a newly developed site. As the PNW gets warmer, it would make sense to plant more drought-tolerant species that are native to Oregon and California. I know some landscape architects are getting onboard with this practice, but unfortunately our culture leans toward planting more sensitive plants, and then heavily irrigating them to keep them from dying. What people fail to realize is that trees have incredibly long lifespans. So rather than watering a tree for the next 100 years, it makes more sense to plan ahead and plant a more resilient, warm-weather species.

What about the diversity of different species on a new site?
Planting a diversity of species is beneficial because it helps safeguard the site against pests and pathogens. As a general rule of thumb for planting a new site, we recommend no more than 10% of the same tree species (paper birch for example, Betula papyrifera); no more than 20% of trees within the same genus (Betula); and no more than 30% of trees within the same family (Betulaceae). The National Nordic Museum in Ballard is an example of a project that won awards for its landscape design, but they didn’t diversify their tree selection. The vast majority of the trees planted around this new building are birches, and while this creates a modern landscape that complements the design of the building, it was risky because the trees are already showing signs of stress, either from an irrigation issue or the bronze birch borer. If they had planted a more diverse selection of trees, it’s possible that only a few of their trees would be in trouble. 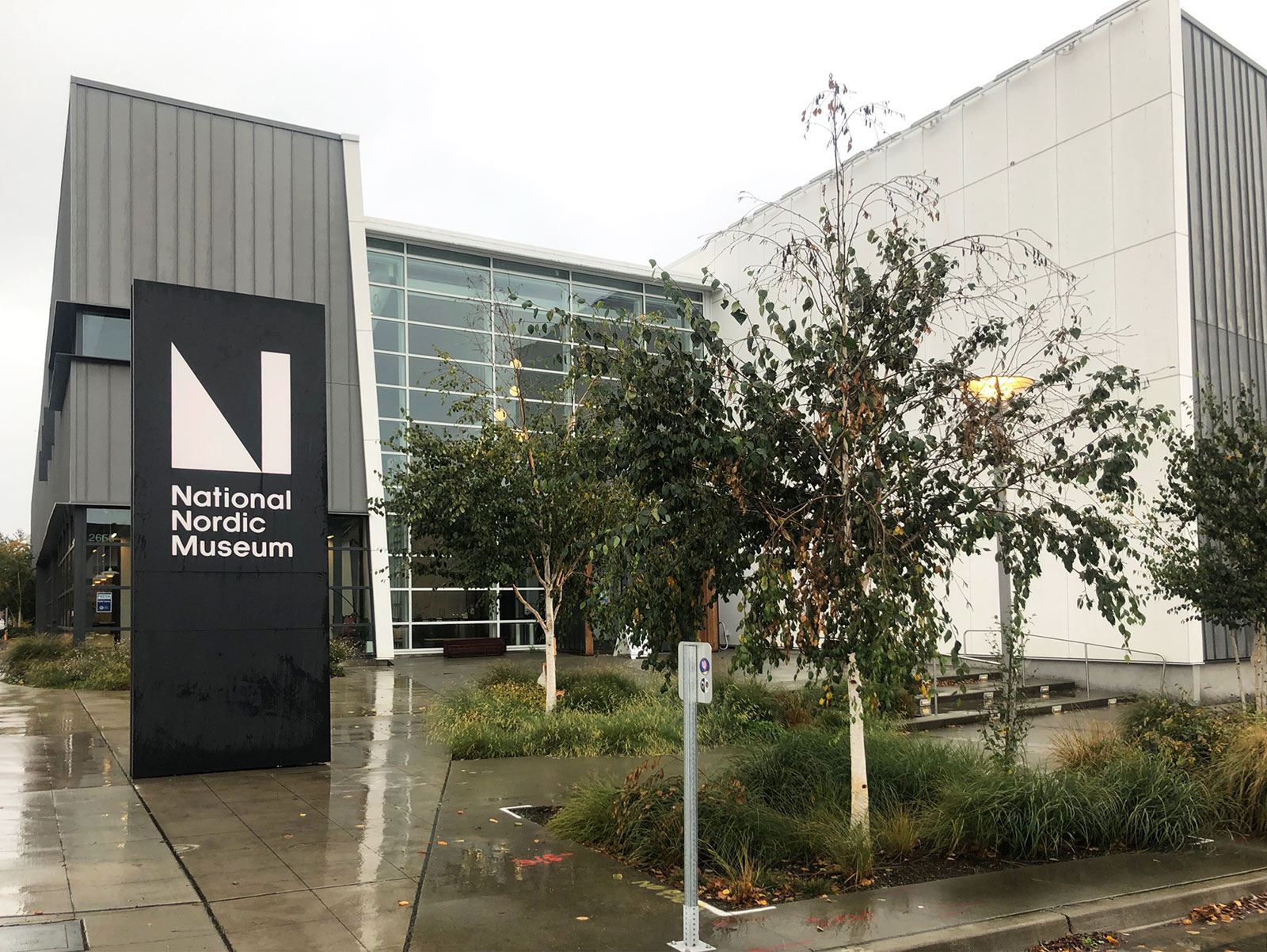 Stressed birches in front of the National Nordic Museum. [Image by Justin Lemma]

Josh Petter has a BS in Environmental Studies from the University of Vermont and an MS in Forest Ecosystems and Society from Oregon State University.