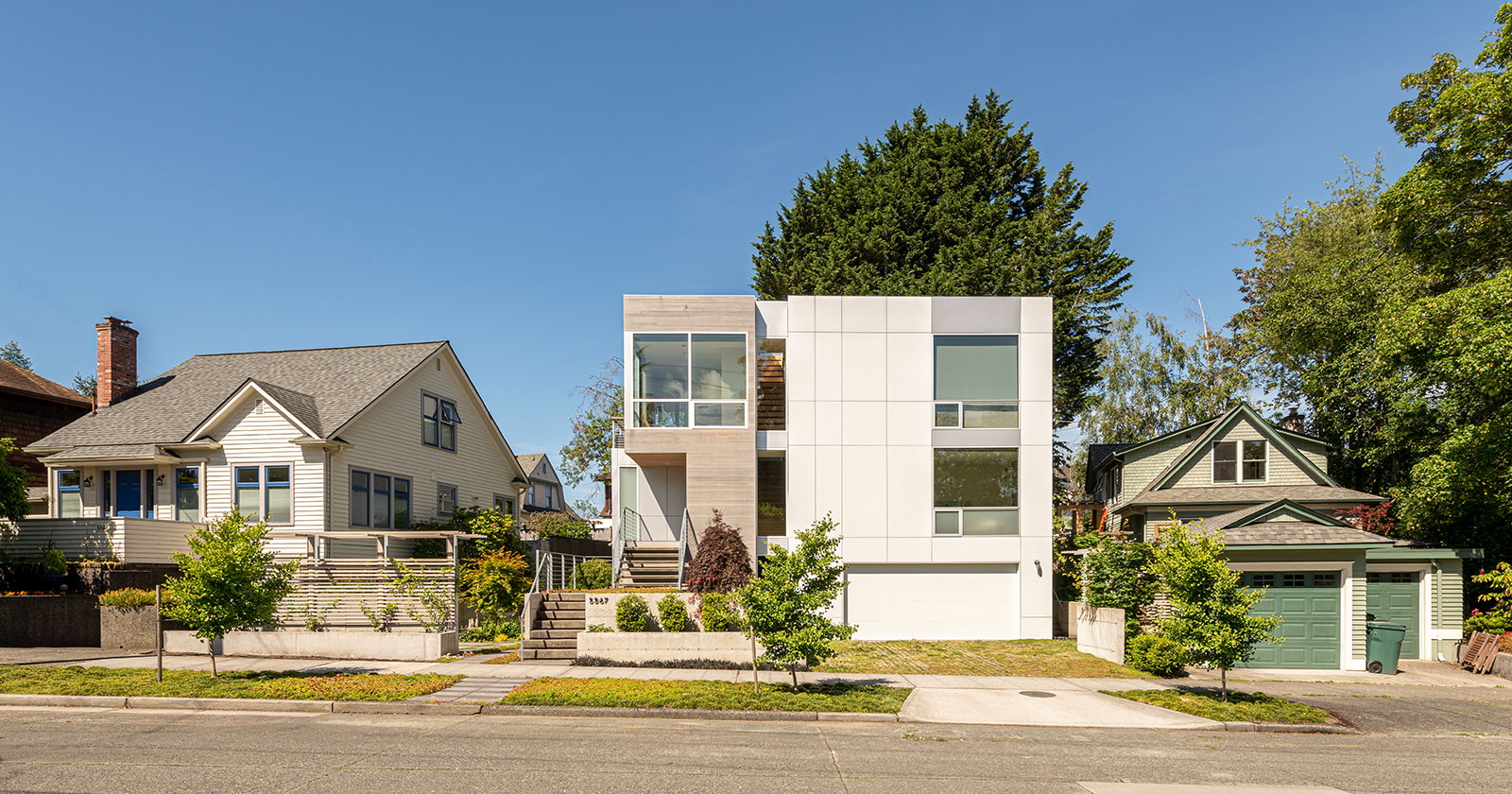 Building a new residence is expensive, and while BUILD factors in a healthy allowance for the landscaping of each project, the majority of the construction budget is allocated toward the house itself. Our Case Study House 2016 (CSH2016) was no exception, and while the landscape allowance included sidewalks, pavers, planters, and basic vegetation, it intentionally excluded a number of items that were reserved for a phase 2. Planning for a second phase of this project established a clean break between the residence, which was completed in 2016, and the less consequential but highly desired hardscape features, which were completed in 2020. This phasing conveniently separated the needs and wants of this project. Deferring these hardscape wants until a phase 2 allowed for completion of the house, and time to replenish the needed funds for the additional hardscape features. It also afforded time to occupy the house, to understand the environment, and to further develop the landscape. Big props go to Shademaker Studio, who designed the phase 1 landscape plan to dovetail with the house, while making accommodations for the phase 2 hardscapes, which can be organized into five categories.

TERRACE
A terrace space for gathering is situated on the south side of the property where the natural light is at its best. Twelve 4”-thick concrete pads were poured on-grade to form the terrace, while gaps between the pads allow a soft fern moss to ease the space, which will be furnished with outdoor chairs and a gas firebox. 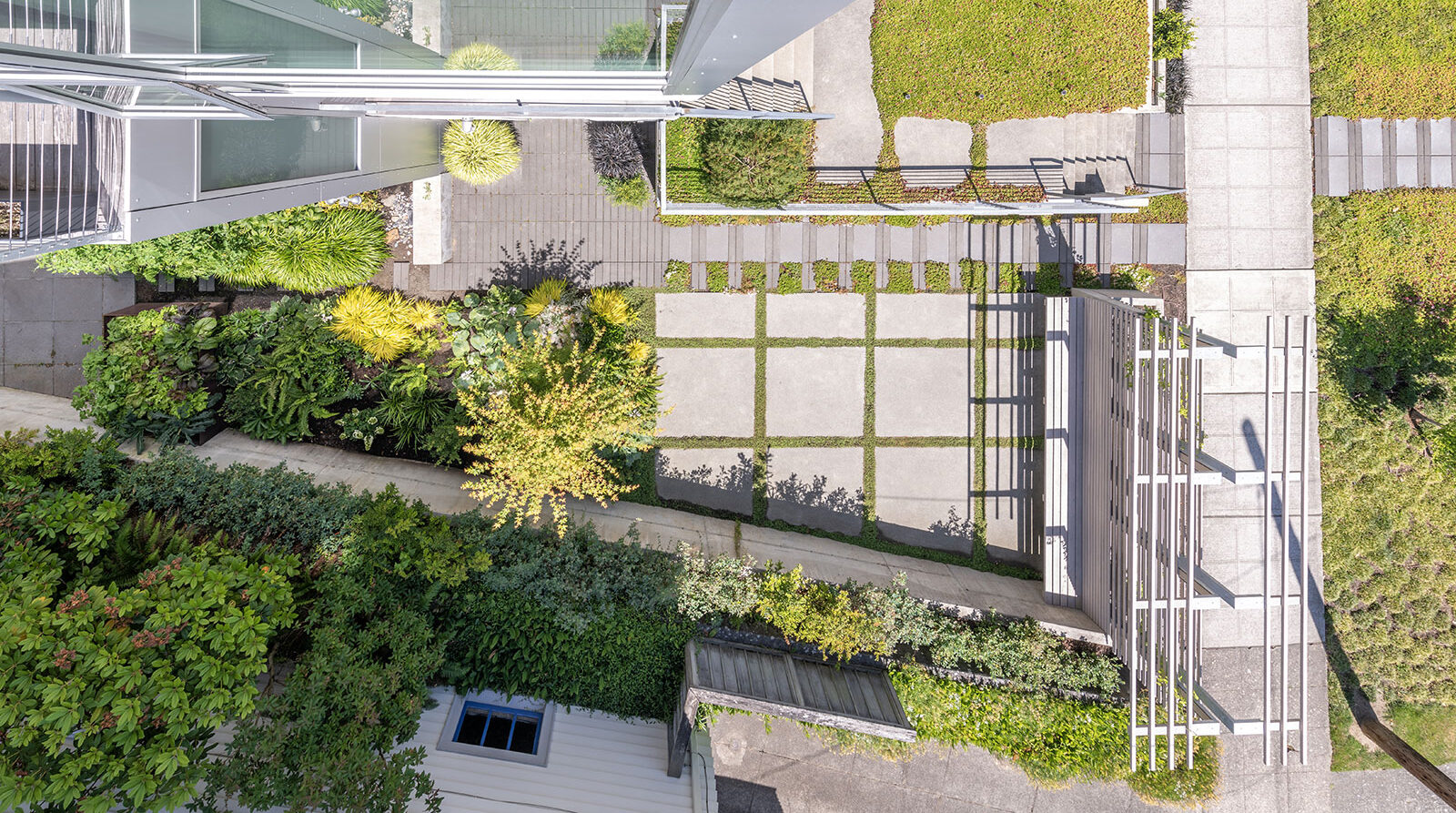 TRELLISES AND SITTING BENCH
Adjacent to the terrace, an 8’-tall trellis was constructed of 2×4 cedar boards placed within galvanized steel channels and attached to a concrete planter box. Welded steel channel assemblies angle out to create a sitting bench and trellis extensions above, while the 2x4s allow attachment of the trellis slats. These 1×2 stained cedar slats run horizontally between the cedar and steel channel columns, creating privacy from the street and providing the perfect environment for vines. 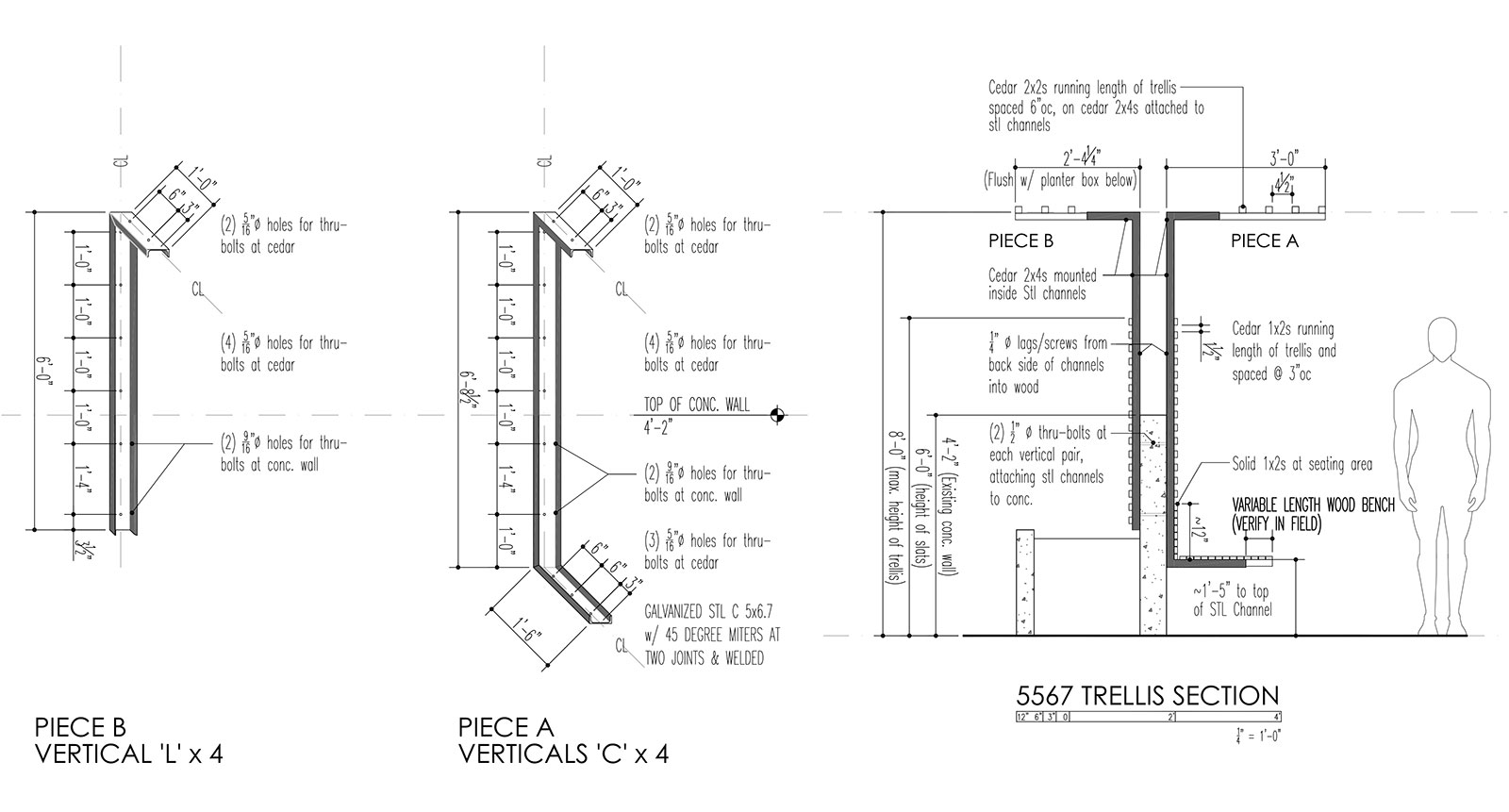 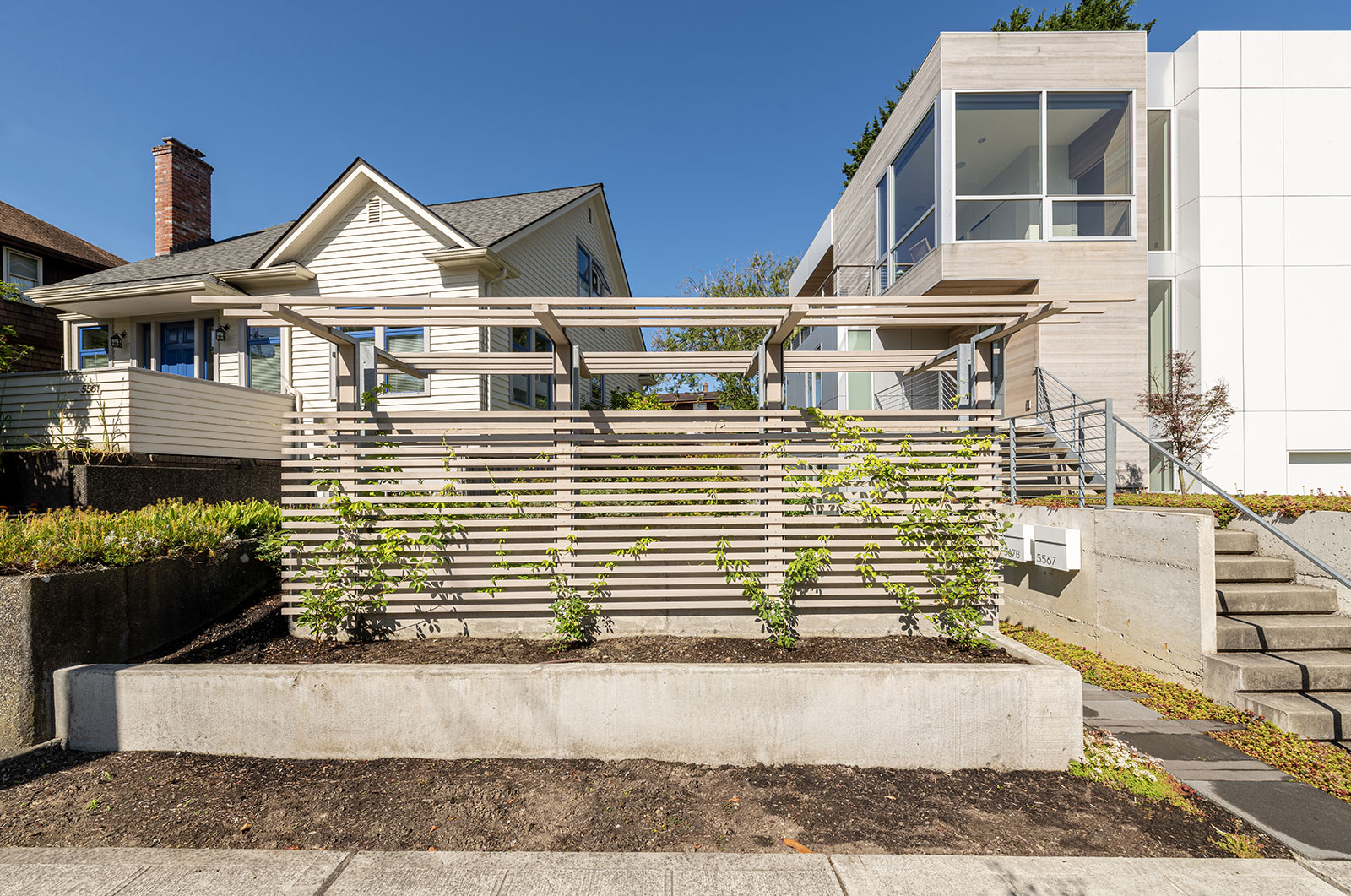 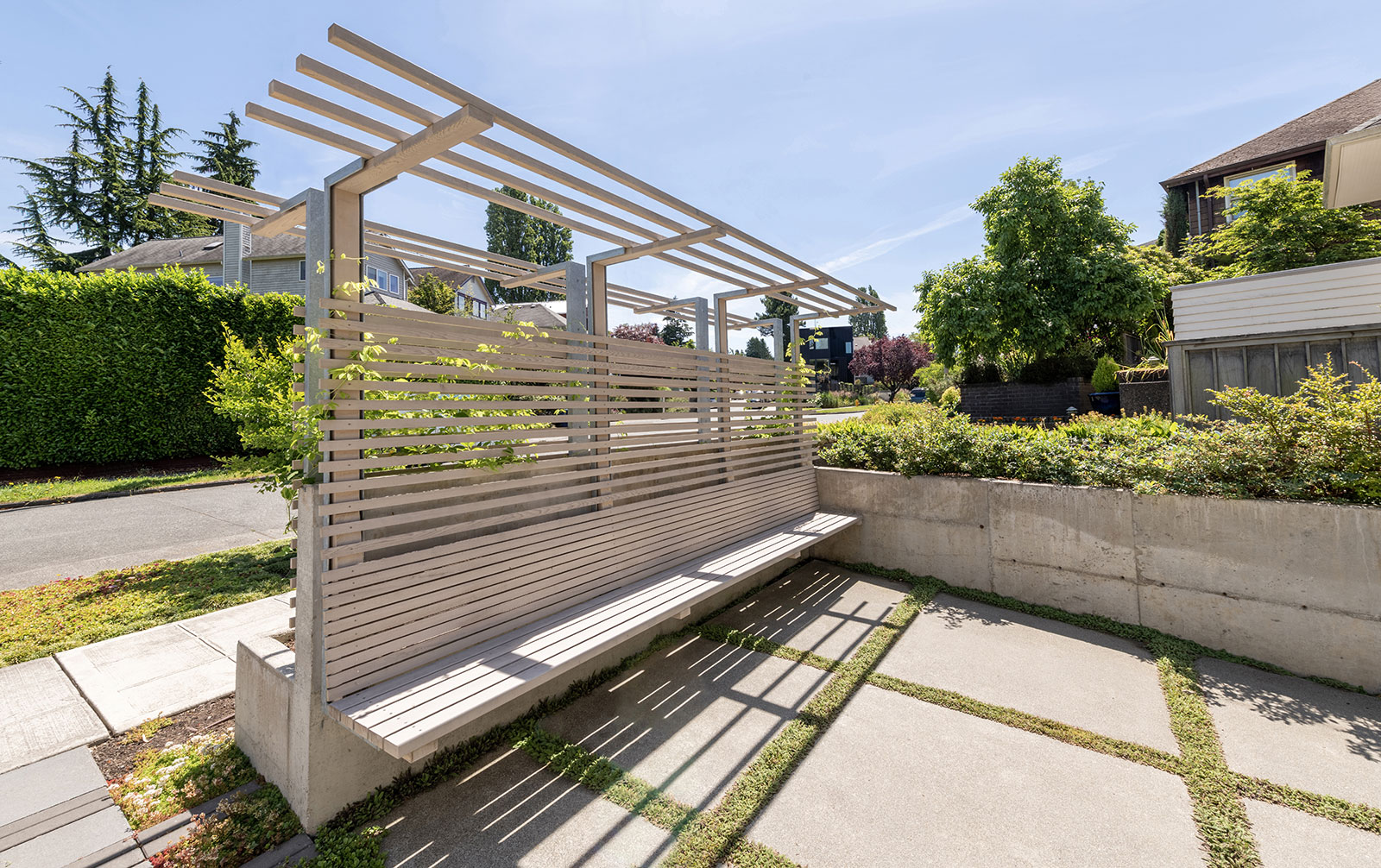 Similarly, at the NE corner of the landscape a smaller trellis conceals the garbage and recycling from the sidewalk, and a matching fence of horizontal cedar slats beyond provides privacy at the side yard. The fence uses cedar 2x4s bolted to galvanized steel wide flanges for the columns, which will allow new cedar to be installed decades from now without having to replace the posts. 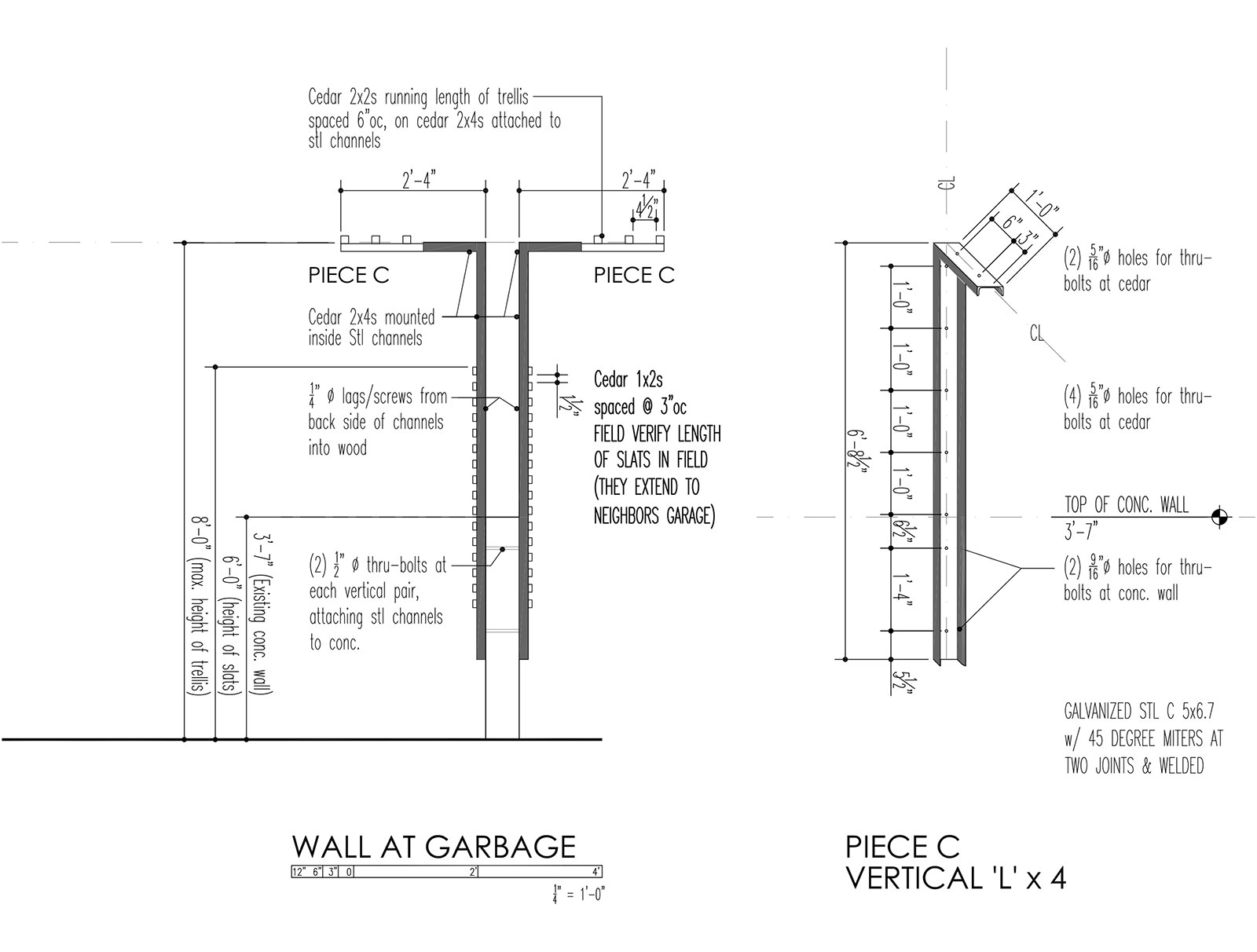 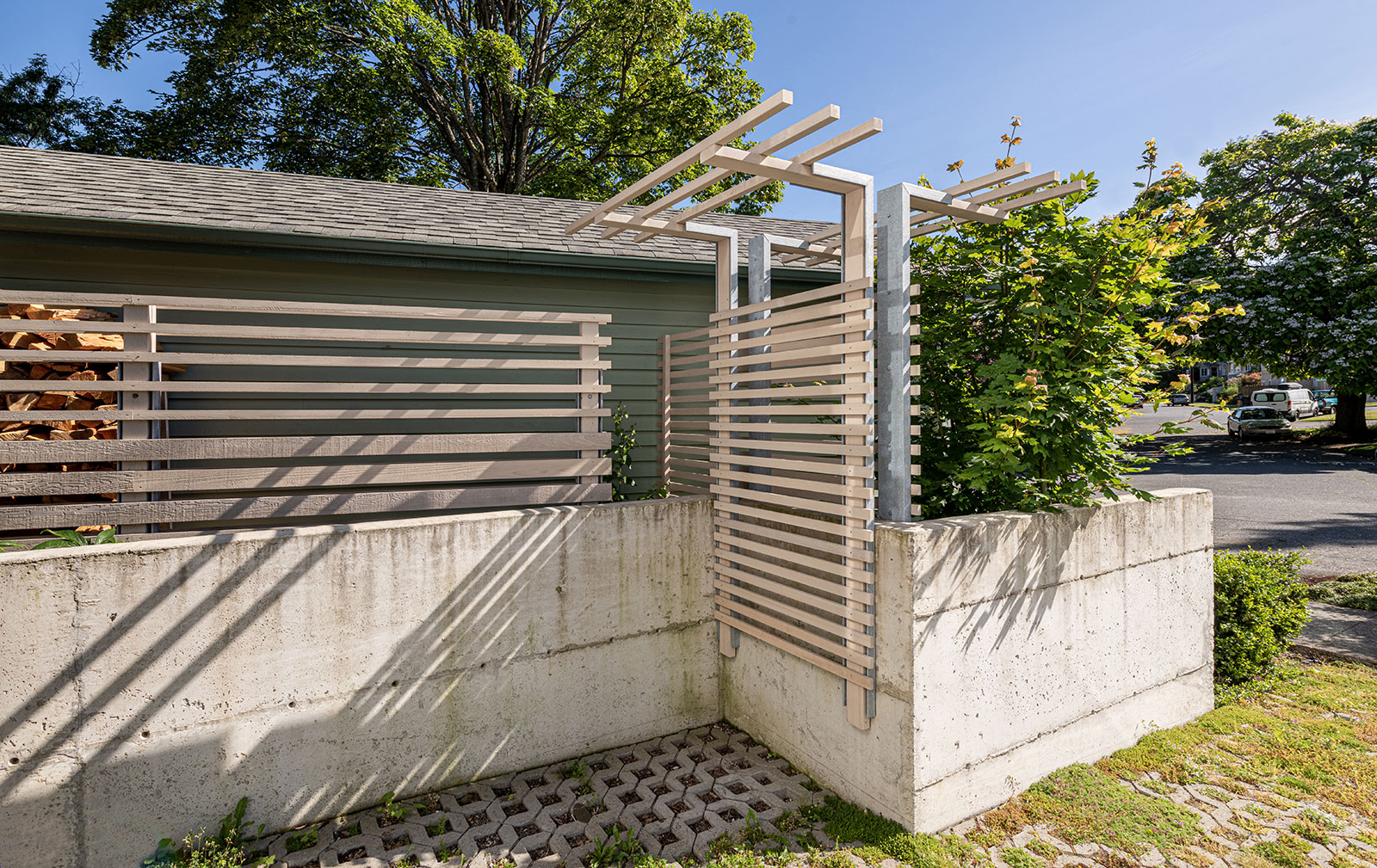 COR-TEN STEEL GARDEN BOXES
Two 30”-tall garden boxes were custom fabricated out of ¼”-thick Cor-Ten steel and placed neatly in the south yard; the steel was selected as a no-maintenance material that intentionally rusts. 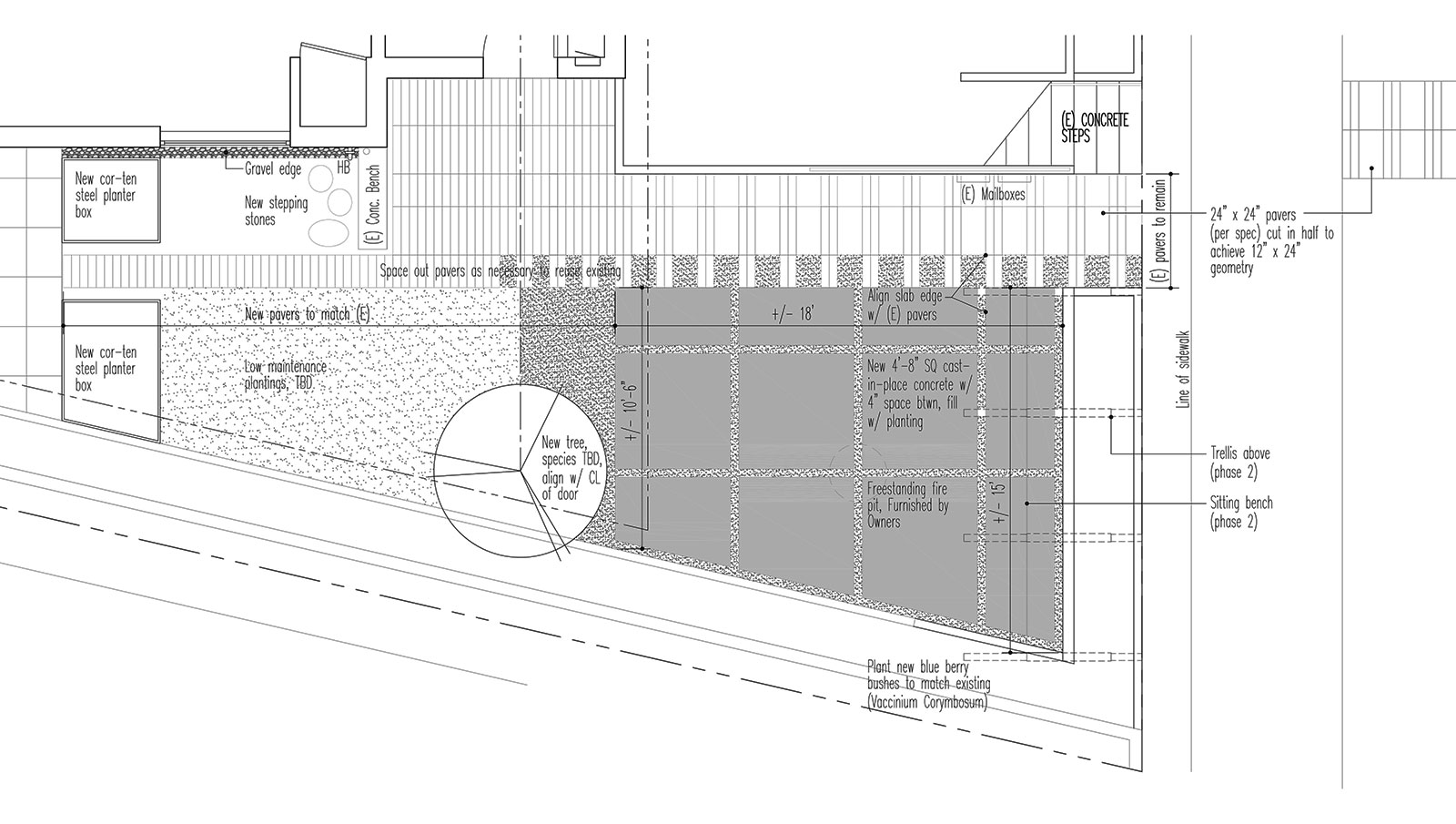 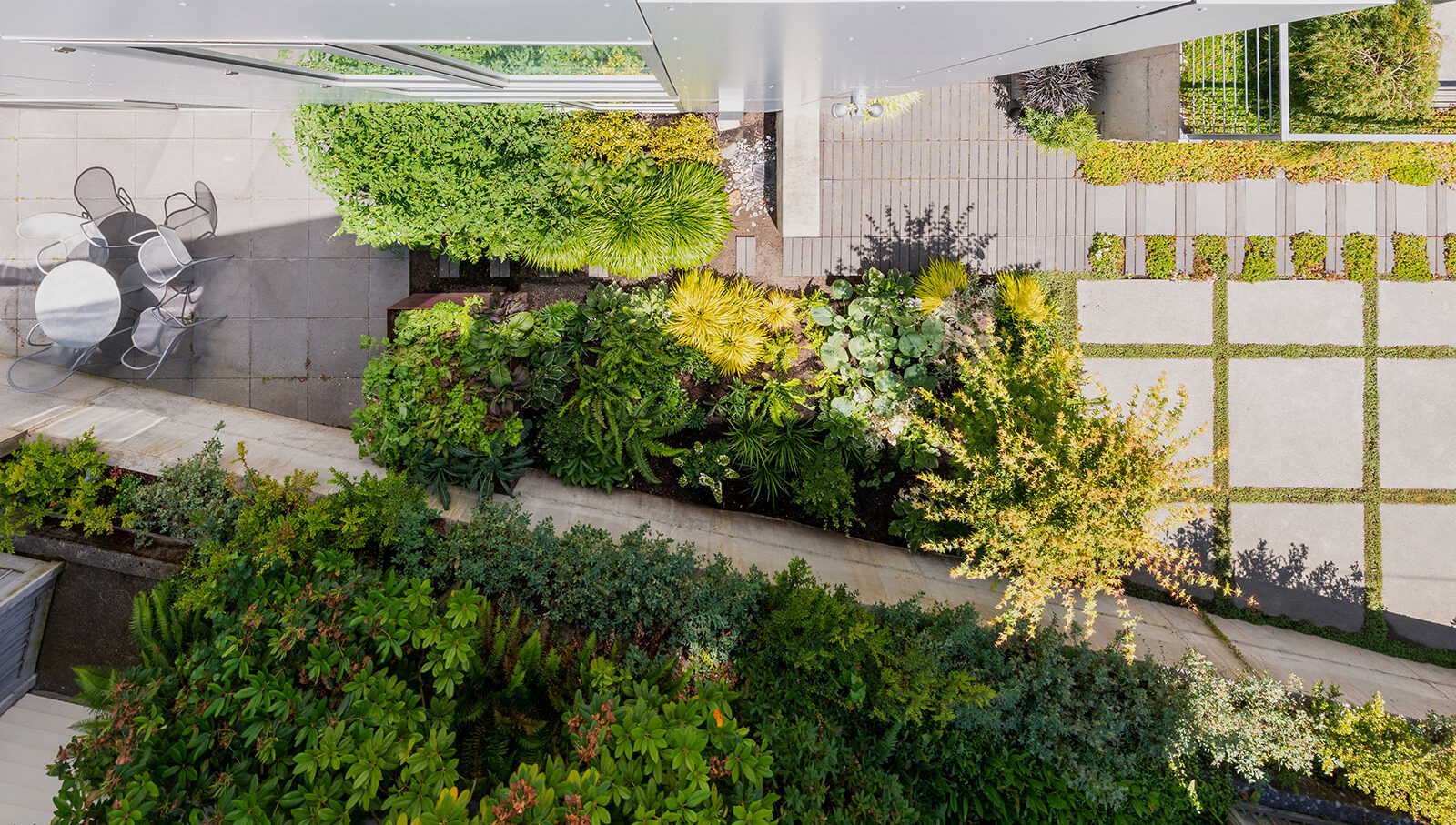 GREEN WALL
The green wall at the southwest corner of the property has been a bit of an experiment at the CSH2016. Previously outfitted with felt garden bags, the wall along the south property line keeps plants in shade for most of the day, while the wall along the west property line exposes plants to direct and harsh sunlight until midday. Due to the temperature extremes, the vegetation struggled and the garden bags failed, as they did not contain enough soil to properly insulate the plants. In evaluating this green wall, it became important to keep the plants in the ground for maximum insulation from temperature extremes; 3D wire mesh panels from Greenscreen were the ideal application, as vines planted in the ground will fill-in the mesh over time. The 3D mesh, which is mounted directly to the walls, has a pleasing aesthetic even without the vines. 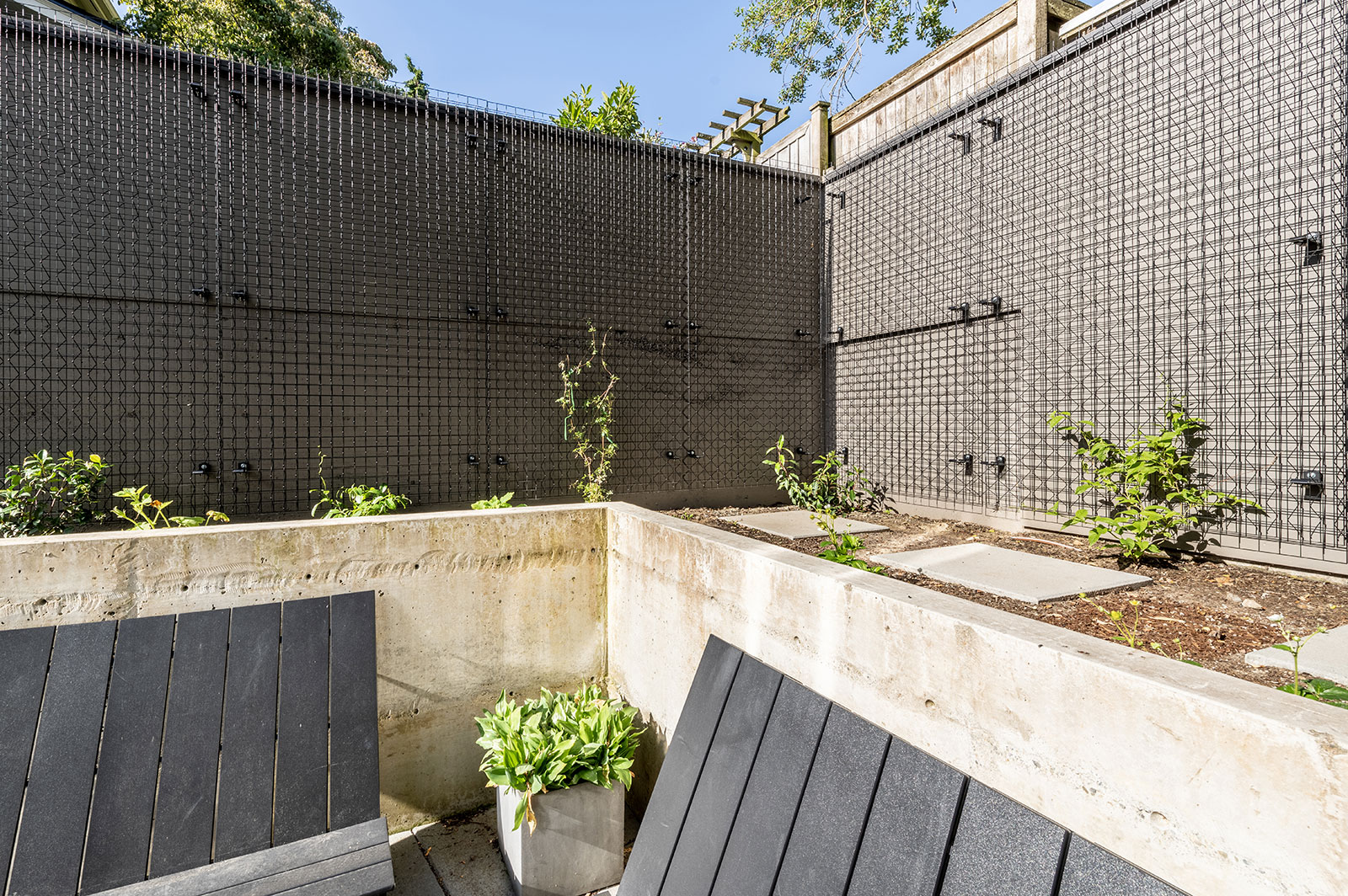 ROOF TERRACE FURNISHINGS
Last but not least, furnishing the roof terrace was a time-sensitive project as summer approached. The Ipe roof terrace, which was built during the construction of the residence, was outfitted with three white outdoor sofas from the Room and Board Aegean Aluminum Sofa collection, and supplemented with the Baltic 50” gas firepit table from Real Flame. Provisions were made during the construction of the house for a hard-lined gas connection to the roof for easy connection later. 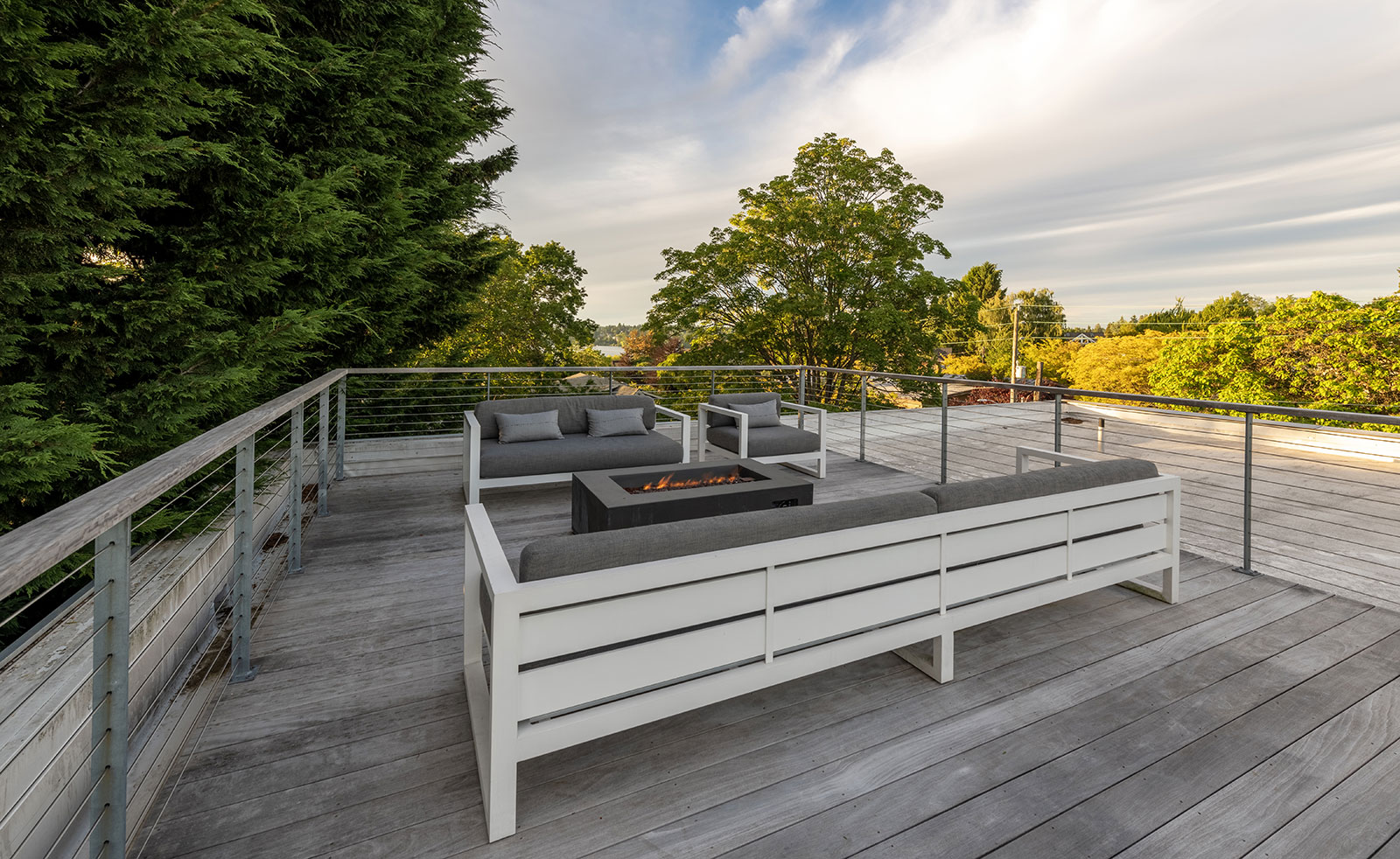 Each of these five hardscape features were more appropriately designed and implemented after experiencing the home for a few years. A better knowledge of the environment, an understanding of how the house and landscape are lived in, and the additional time to save for the expense of these hardscapes all played an important role in establishing a phase 2 for the CSH2016. Phase 3, as it turns out, will be primarily completed by nature as the vegetation fills in, as the trees mature, and as the garden produces vegetables and fruit.