The Logic of Elevation Design 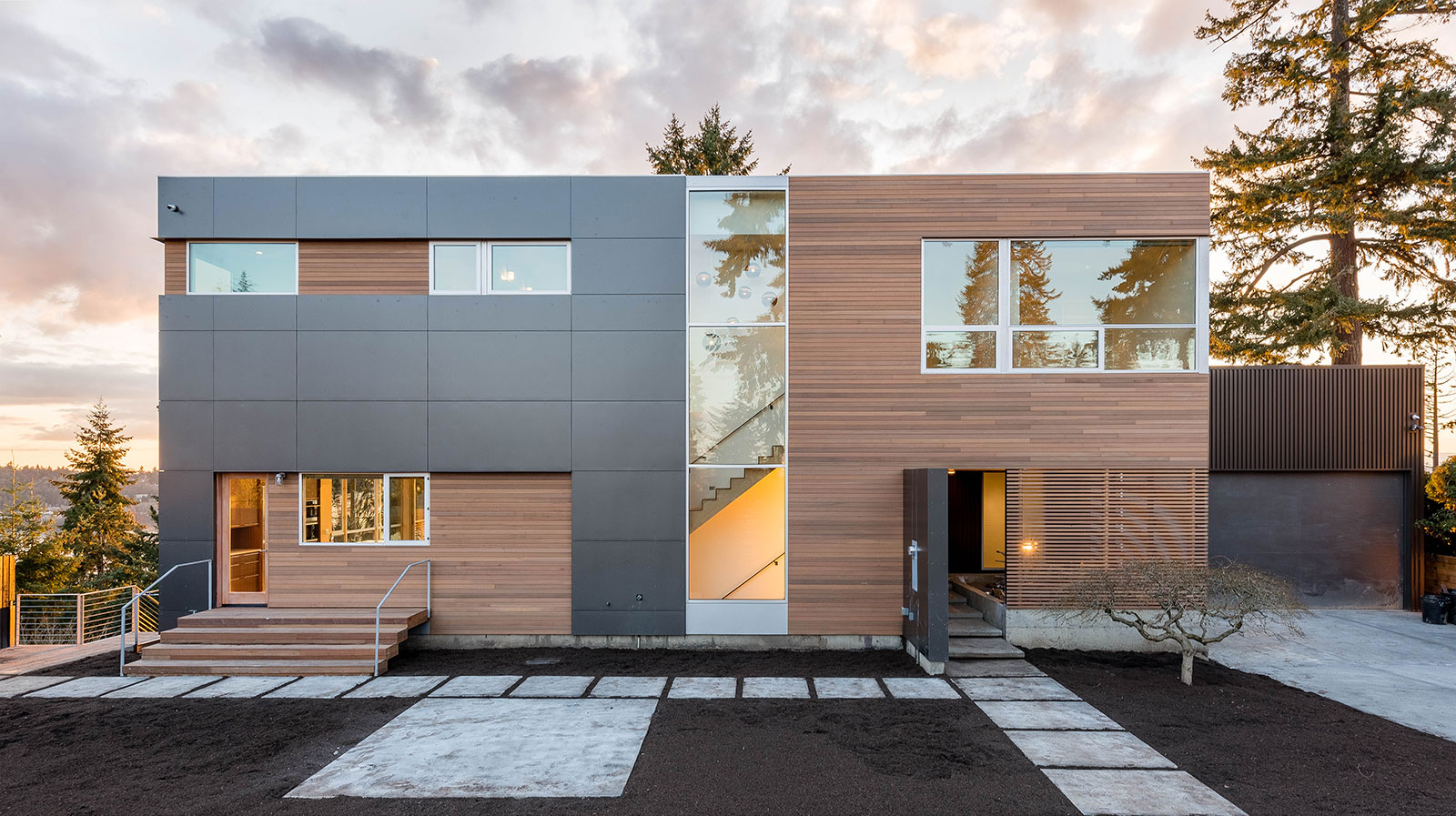 Perched at the top of a hill in Bellevue, Washington, BUILD’s most recently completed project, the Pham Residence, commands sweeping views on all sides. Lake Washington, downtown Seattle, and the Olympic Mountain range are prominent to the west, while downtown Bellevue and the Cascade Mountain range are revealed to the east. Needless to say, the striking views are an important element to the design of the home, both inside and out. Along with capturing key sightlines to the mountains and cities beyond, there is also the need for screening from the street and shade from the sun. Subsequently, there is a delicate dance performed by the architecture at the east façade of the residence, where desire for light and view are balanced with the need for privacy and protection. While the envelope of the project is designed as a three-dimensional element, today’s post will primarily focus on the aesthetic and technicalities specific to the east elevation.

Because the massing of the residence is a simple 4-sided volume, the design of the east elevation was just as much an exercise in graphic design as it was an architectural exploration. Once the key locations for windows were established, design variations were explored and evaluated based on material transitions. These variations started by defining rainscreen panel bays within a field of horizontal cedar siding. These bays combined the windows into similar horizontal or vertical organizations and gave the east elevation a visual clarity. Meanwhile, the subtle lines of the cedar accentuated the horizontal geometry, helping to downplay the height of the structure. A covered but unconditioned entry at the corner started taking shape with cedar slats matching the siding but backlit to produce a warm and welcoming approach.

An important design feature emerged when the owners asked about the possibility of revealing the interior stair with glazing from the main level to the upper level. This idea, combined with large expanses of glass, produced a clear vertical division of the east elevation. It also allowed the stair to become a prominent design feature at the façade. Variations on this scheme explored two primary strategies; either reinforcing the horizontal geometries or allowing the two halves of the elevation to develop their own personalities. A fin wall at the entry becomes an important design element in these schemes as it guides visitors to the entrance and provides a bit of depth to the façade.

As the stair window wall evolved, we introduced a new detail that extended the glass face up beyond the height of the roofline with a minimal parapet wrap. The generous height at the stair volume, along with the dramatic presence of the stair from the exterior, was the perfect opportunity for a highly visible lighting strategy at the interior. Six recycled cardboard sphere pendants by Graypants hang at different heights creating an asymmetrical pattern at the glowing stair column.

This ground-to-sky window created a formal division between the north and south halves of the elevation and allowed a stronger contrast of materials between the two sides. We then introduced a simple rule that windows would always be located within a cedar bay. This established a consistent logic with the east elevation that allowed each half to respond to its own internal functions while sharing a similar material.

In the final phase of design, we decided on a dark panelized system to compliment the cedar and match the garage volume to the north. The result is an elevation that responds to the logic of the interiors while presenting a handsomely varied public face to the residence. 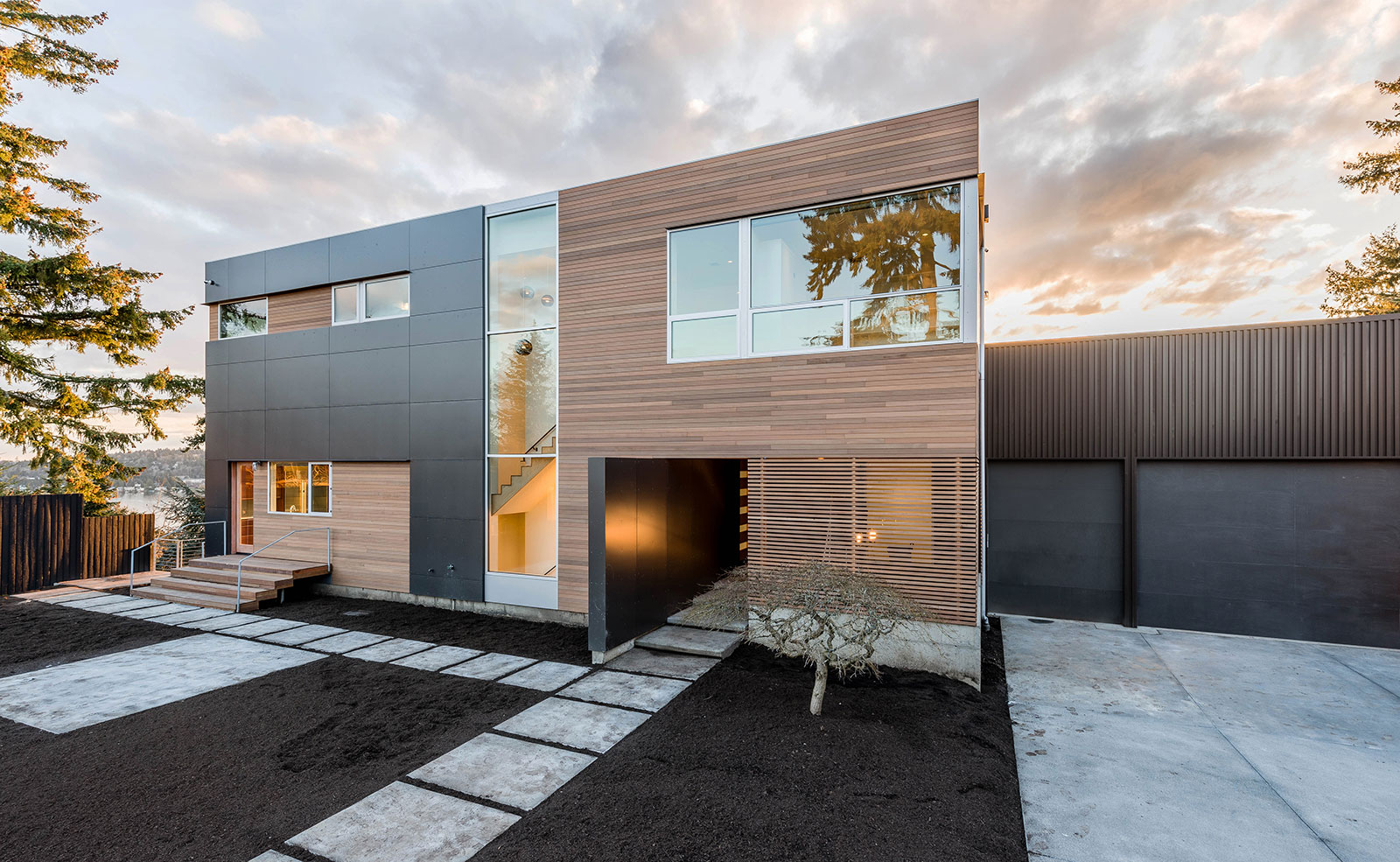 This envelope logic wraps around the remaining three sides of the structure while subtle variations accommodate different conditions. 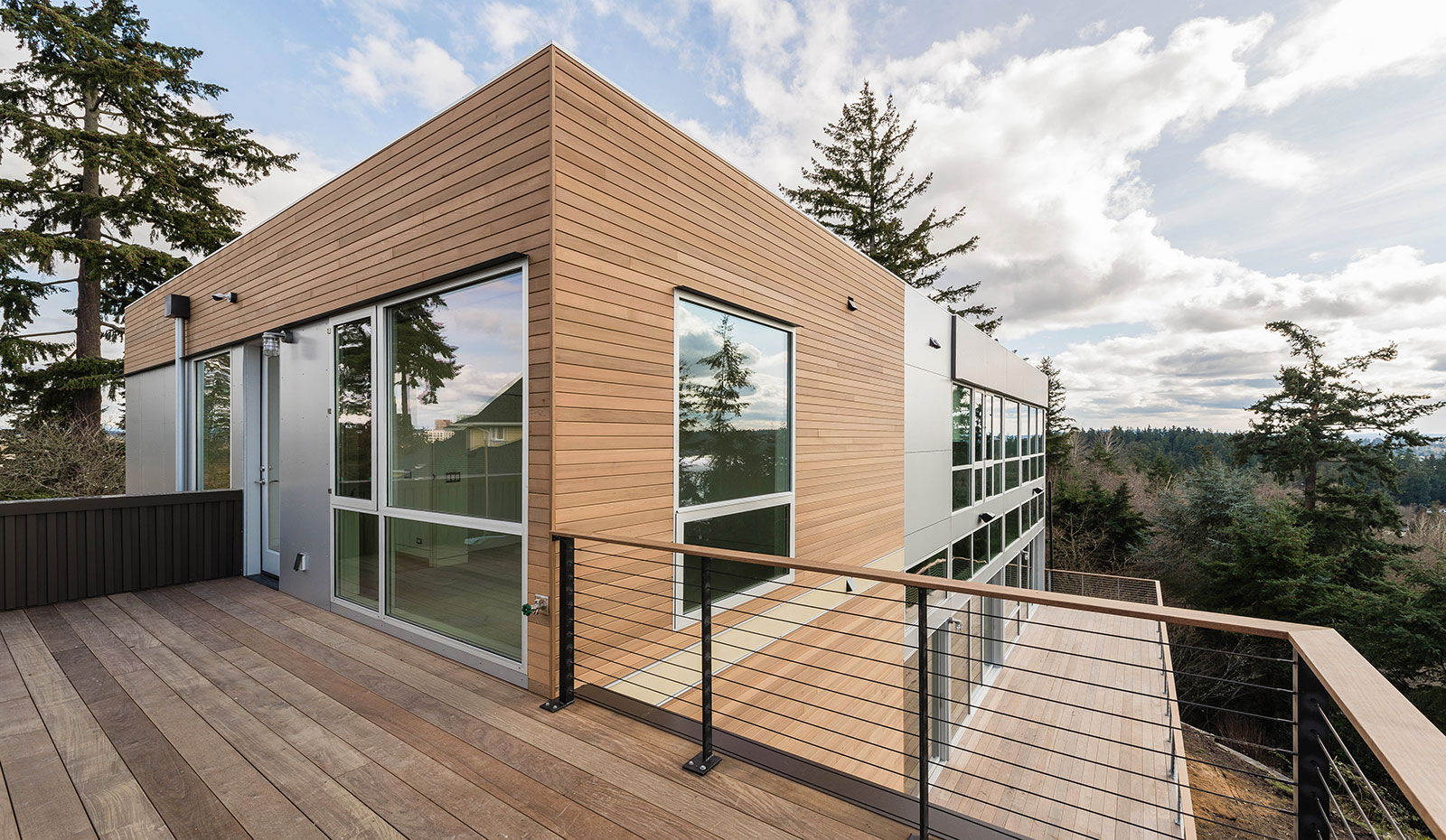 The technical methods behind the east elevation involve two siding strategies. The horizontal 1×4 T&G cedar siding sits on a conventional rainscreen assembly with ¾” runners over a Vaproshield weather barrier. This cedar is finished with a Sikkens “Natural Cedar” semi-transparent finish. We find that this assembly works nicely in conjunction with the Marlin 1505 series clear anodized aluminum windows.

To enhance the material transition, the Silver Black ALx 26 aluminum composite rainscreen panels by Oculus are brought out a bit further. We used a similar rainscreen assembly except with 2×4 runners to provide a few inches of relief between the cedar and the aluminum panels. This depth is further enhanced with subtle aluminum eyebrows at the upper floor windows.

The Pham Residence uses many tried and true design and construction techniques along with a few new details and the east elevation illustrates the combination nicely. Stay tuned for additional coverage on this house as we discuss the interiors and landscaping. 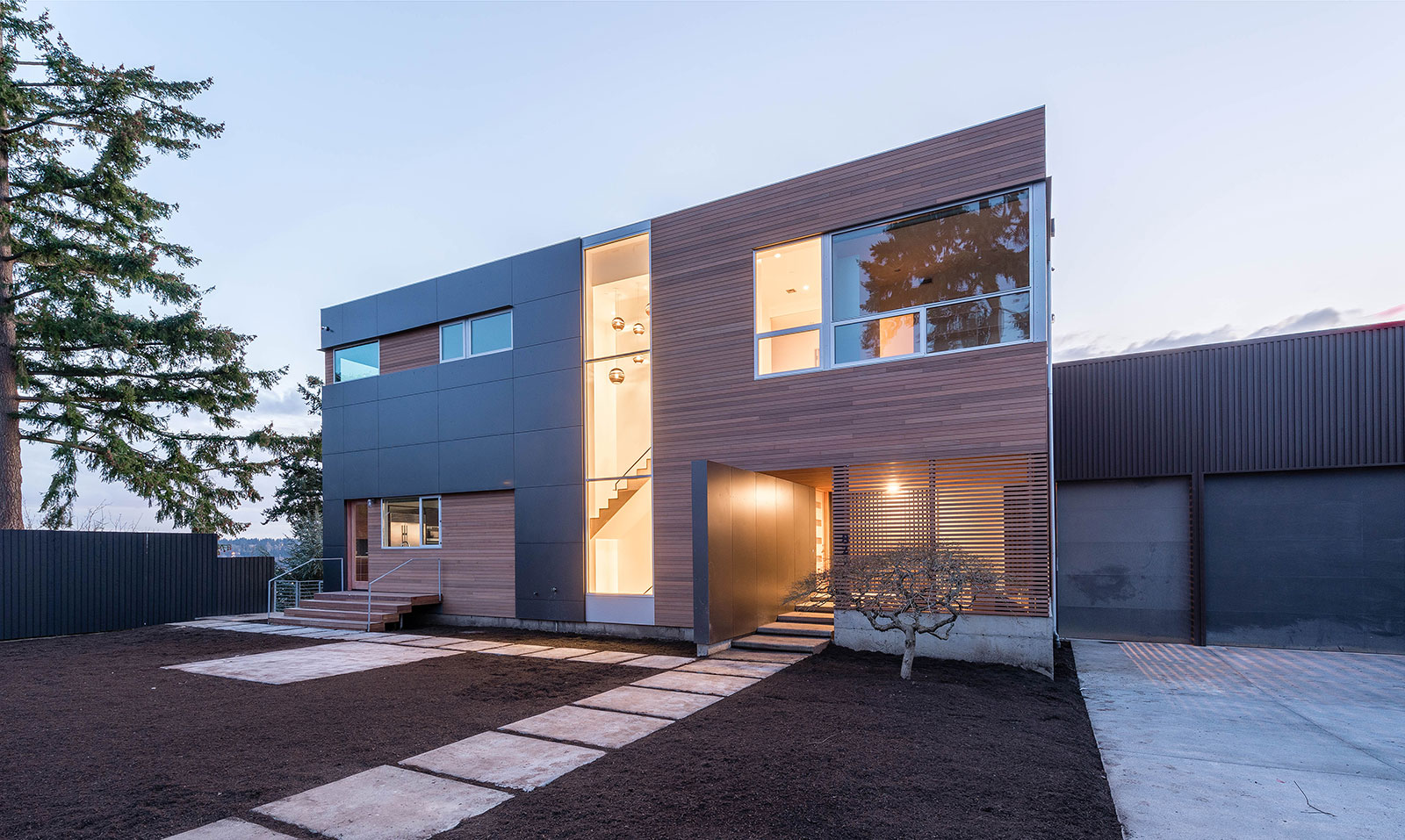