Home 2016 October Running the Numbers of a Design Monoculture

Running the Numbers of a Design Monoculture 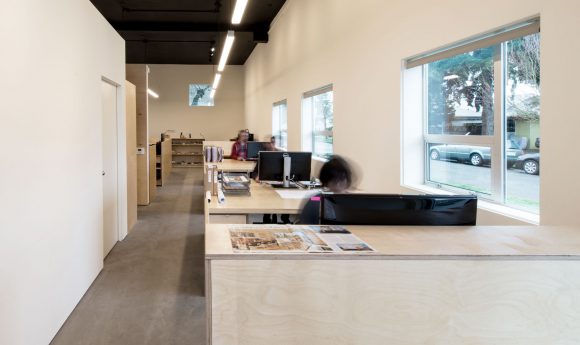 In recent years, there have been several important articles published on the size of U.S. companies and the subsequent loss of small businesses in America. The current issue of Atlantic Monthly includes an excellent article titled America’s Monopoly Problem in which author Derek Thompson states:

“Entrepreneurship, as measured by the rate of new-business formation, has declined in each decade since the 1970s, and adults under 35 (aka Millennials) are on track to be the least entrepreneurial generation on record … In almost every sector of the economy—including manufacturing, construction, retail, and the entire service sector—the big companies are getting bigger. The share of all businesses that are new firms, meanwhile, has fallen by 50 percent since 1978.”

“According to one traditional yardstick, an industry is deemed excessively concentrated when the top four companies in it control more than 40 percent of the market.”

While the focus of both articles is directed more toward food, utilities, retail, and technology, we couldn’t help but wonder if and how these issues might relate the architecture profession. Does the design world follow the big company trend? How does the architecture industry measure up to the 40% yardstick rule? Is our industry also subject to a monoculture?

While a study like this could easily become as involved as a graduate level thesis project, we decided to dive in and take a cursory review of the architecture industry with these concerns in mind. The U.S. Census Bureau lists several data points of “Architectural, engineering, & related services by Employment Size of Enterprise” each year between 1998 and 2008, and while the available data isn’t fresh, it does indicate important recent trajectories. We’ve also broken down the information into what we consider small, medium, and large firms to compare the numbers and illustrate the trends.

First, we looked at the number of firms in the U.S. broken down into our three size categories. 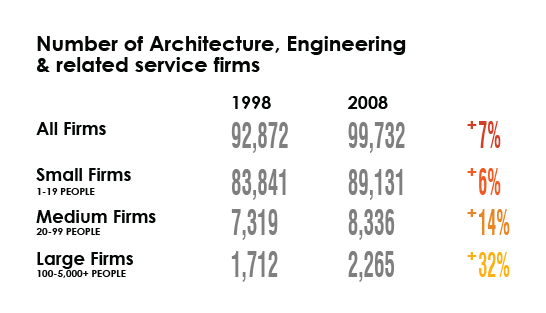 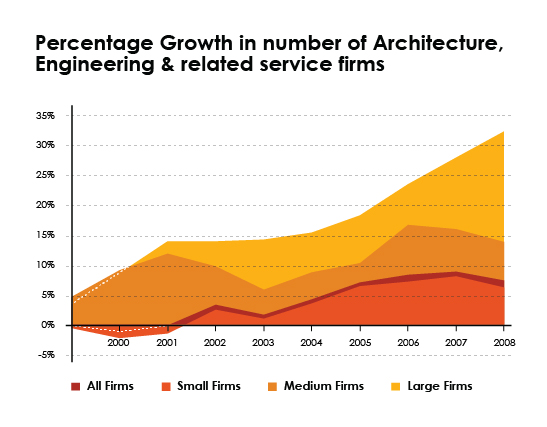 What’s surprising here is that there was only a 7% growth in the total number of firms but large firms experienced a 32% growth within this same ten-year period. Small firms, at 6% growth, didn’t even keep up with the combined average while medium firms outpaced the average with 14% growth.

Taking a more granular look at the equation, we then reviewed the number of employees of architectural, engineering, & related services firms within this same time frame and found a similar growth gap between small, medium, and large firms. 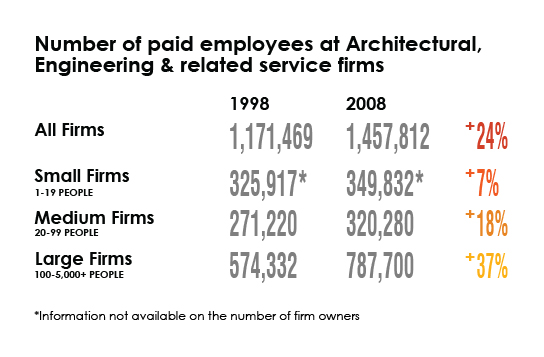 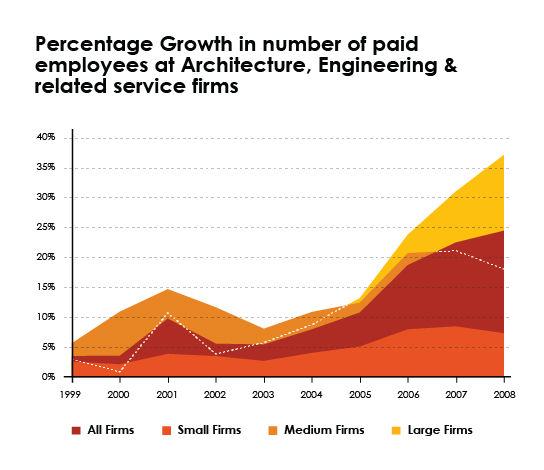 Adding over two hundred-and-eighty-six thousand jobs, the architecture and engineering industry grew 24% from 1998 to 2008. Capturing 75% of these new jobs, large firms account for most of this development, growing 37% in this time period. Small firms, on the other hand, don’t even keep up with population growth (estimated at around 10%). Once again, the large size firms double the growth of medium firms, which in turn more than doubles the relatively stagnant growth of small firms. Also of note, if you dig into the Census Bureau numbers, is that in 1998 the largest firm category was 500+ employees. By 2008 there are seven additional categories with the largest tracking the growth of firms 5,000 employees or more.

How these numbers are processed and translated might lead to slightly different results and, no doubt, our method is only one of several possibilities. With that said, any reasonable method is going to lead to a similar interpretation, that small firms are stagnant at best and large firms are dominating the architecture and engineering culture. The numbers indicate that the design profession is most certainly following the big company trend in the U.S., as the growth of small firms isn’t even keeping up with population growth, despite a booming industry. If these trends have remained steady between 2008 and 2016 and continue to project into the future, it seems safe to say that the architecture and engineering industry is creating a design monoculture.

It’s difficult to say how the architecture and engineering industries measure up against the 40% yardstick rule. The Census Bureau data doesn’t break the numbers down far enough to determine how much of the market is controlled by the top four companies. With that said, it seems unlikely that so few architecture and engineering firms would have their hands on 40% of the construction in the U.S.

Small firms can be scrappy and nimble, leading to design solutions that are clever and more cost-effective than those offered by large firms. Because smaller firms tend to be local to particular regions and embedded within communities, their design solutions are often better aligned with the cultures and systems around them. Small firms also tend to benefit employees by offering greater flexibility with office roles and work schedules. While large firms can pigeon-hole individuals who don’t deliberately seek out their own path, a smaller firm requires everyone wear numerous hats and share responsibilities.

At the 30,000 foot level, a landscape of more small and medium size firms and fewer large firms seems better suited to problem solving and advancing the built-environment. The agility of many smaller sized firms all tackling similar design challenges from different angles and with different resources is likely to provide a much more responsive and diverse set of solutions than the lumbering large firms. The trend of largeness in the architecture and engineering industry jeopardizes the very culture and diversity that attracted most of us to the design profession. It’s difficult to believe that its most appealing traits, like creativity and design diversity, will be preserved by the mechanics of an advancing design monoculture. It may be time for the design industry to set its problem-solving skills on the business of design in order to save the nature of design itself.