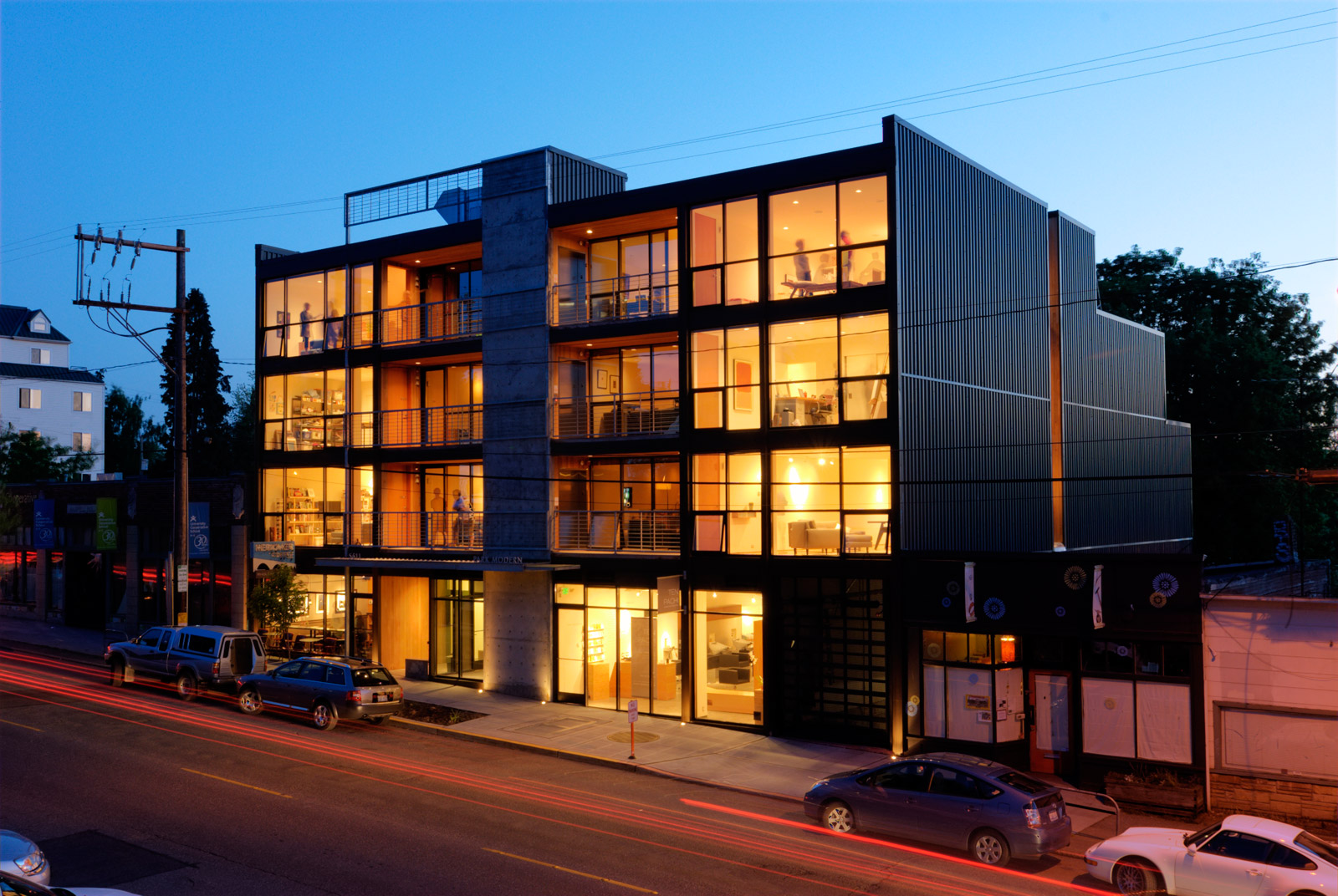 Back in 2007, BUILD was fresh off completion of the Park Modern development, a multi-family, mixed-use building in Seattle’s University District which incorporates condominiums, townhomes, and ground floor commercial spaces. Wearing the many hats of designer, developer, and builder for the project allowed us to gain a wealth knowledge on each phase of the process. This included everything from the architecture and permitting, to the financing and marketing, construction, and eventual occupancy of the building. By the end of it all, we had earned our MBA degrees from the school of hard knocks, and the experience has served us extremely well ever since. As it goes with economic markets, the real estate bubble burst shortly after the Park Modern was completed, and these medium-sized, multi-family projects took a hiatus from the development scene. Between 2008 and 2012 there just wasn’t much work focusing on multi-family projects. And because the market to apply our knowledge was dormant, many of our insights from the Park Modern project have been patiently waiting in the wings.

Now that the real estate market is back full-force in the Pacific Northwest, the multi-family and mixed-use project types are more in demand than ever. The boom we’re currently experiencing is occurring so rapidly that we’re noticing unfortunate mistakes and missed opportunities in property development — both in design and in construction. So, we feel compelled to share our top strategies for urban development and today’s post draws examples from the time-tested Park Modern building.

From the long list of insights we gleaned from the many-layered process, we offer five strategies in planning and programming we implemented that have continued to show benefits as the years roll by:

1. Incubate the ground-floor commercial spaces.
The businesses that occupy the ground-floor retail spaces of a building will come to define the character of the place. The nature of these businesses will determine whether the development is a destination or an urban vacuum. It constantly amazes us when entire design teams (owners, developers, architects) do not put thoughtful and consistent effort into incubating these environments. Smart teams with a long view on neighborhood place-making are forming relationships with local restaurants, cafes, bars, and shops during the early phases of the project, long before the commercial spaces are actually available. The legwork required to foster these relationships and secure exceptional businesses is every bit as important as the work of drawing and permitting a building.

For the Park Modern, we connected with a couple of small, locally owned businesses early on. Instead of leaving the occupancy up to the market variables once the project was complete, we formed relationships with Ten Pachi Salon and Herkimer Coffee. Both have played a significant role in defining the culture of the building and the neighborhood with people visiting from all over the city. We also relocated the BUILD office to a ground-floor commercial space in the Park Modern, adding another level of design engagement with the pedestrian experience of the building. 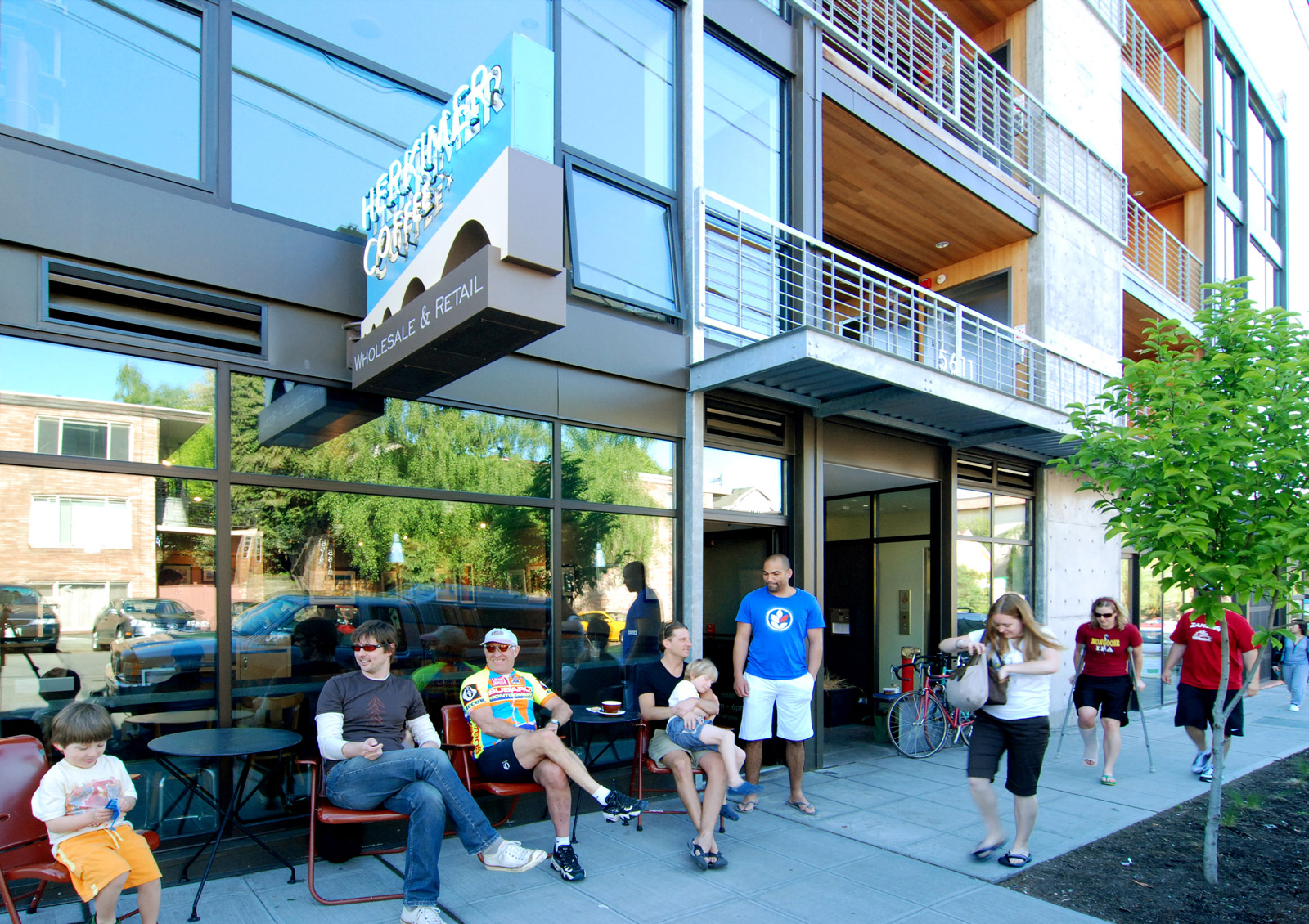 2. Prioritize character over immediate profit.
Often, the anticipated rent of the ground floor commercial is nearly inconsequential to the financial viability of the project. That is, the amount of commercial square feet is very small in comparison to the amount of square feet of the housing above. Securing the right fit for commercial tenants, defining the character of the building, and making the environment a destination for people is more important than maximizing rents for these spaces. A sharp developer can foresee reducing the commercial rents (often times significantly) in order to benefit the living units. And with this “benevolence,” these developers often see an increase in value for the rental or sales value of the living units since the building has worthwhile and active commercial uses for the occupants to enjoy.

This strategy was used on the Park Modern building with great success. Homeowners and tenants are attracted to the appealing shops like Ten Pachi and Herkimer Coffee which keep the sidewalk active and engaging throughout the day. The building is constantly buzzing with activity, and the value of the living units above benefit from that activity accordingly. 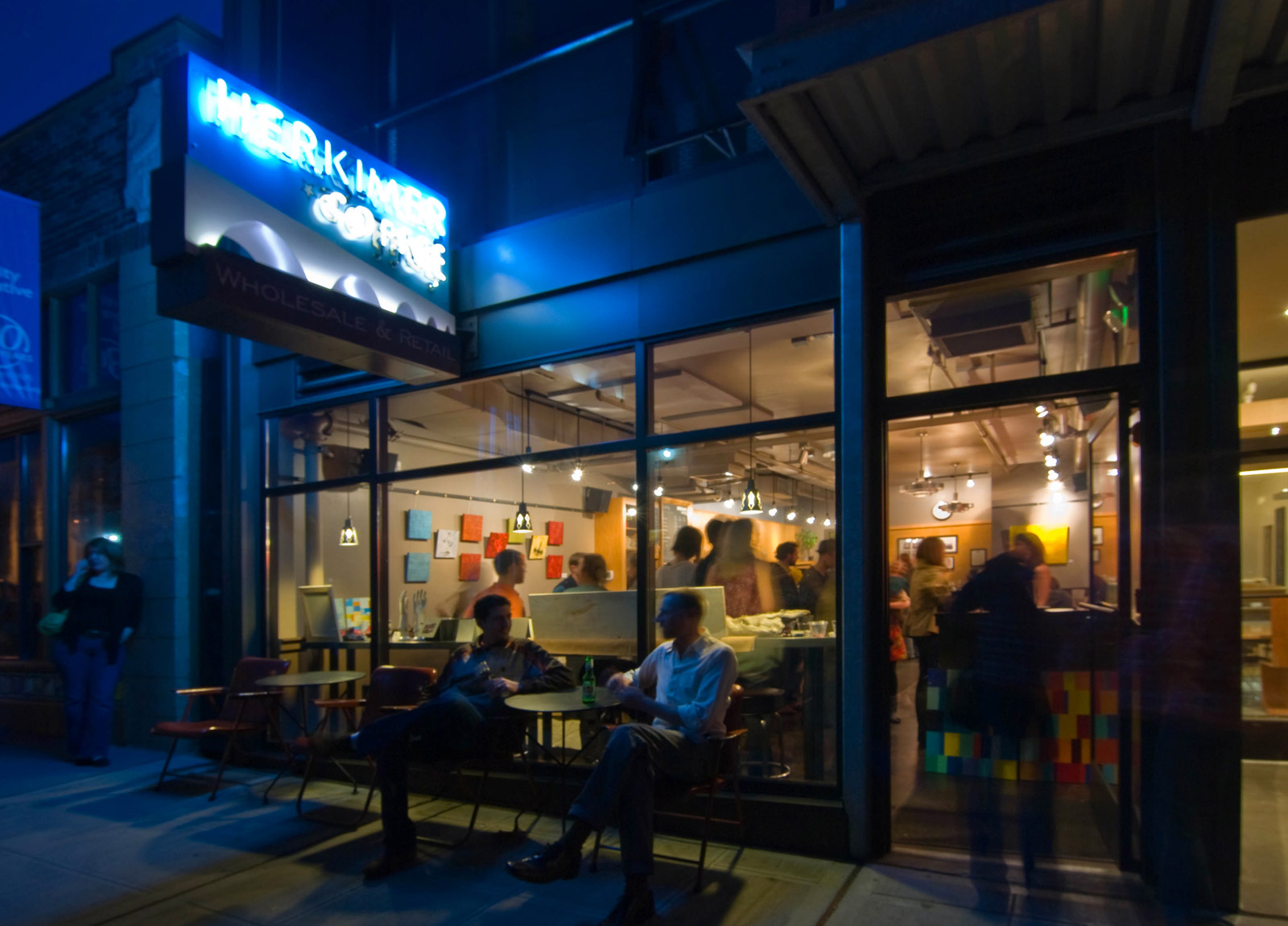 3. Provide amenities to the neighborhood to garner goodwill and support.
Homeowners, renters, and the surrounding community understand the advantages of local amenities and the type of ground-floor retail mentioned above can do double duty. Spaces that build character within the building and neighborhood are commonly the types of businesses that offer services or luxuries to the neighborhood. Such amenities can include anything from open space and playgrounds to bike shops and restaurants.

A coffee shop serving locally roasted beans and fresh pastries along with a design-minded salon are both amenities that attract regulars and build trust and cooperation in our own community. In many ways these spaces have become the living room of the neighborhood. 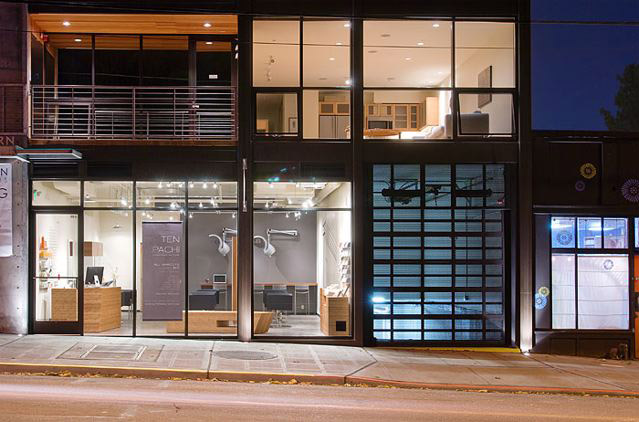 4. Provide amenities to the residences to build community.
Similar to the above example, when occupied by the right businesses, the ground-floor retail can offer services and luxuries to the homeowners and renters in the building. Other offerings can be designed for the sole use of building occupants such as common areas, which by definition are indoor or outdoor areas set aside in a building’s square footage specifically for use of building occupants. While this shared square footage is required in larger developments, it’s important to some degree in all buildings. This type of space promotes the organization of holiday parties, summer barbecues, and other events that promote community and camaraderie.

While the Park Modern isn’t large enough that it triggers the Seattle Municipal Code required community space, we added in a design component to serve a similar purpose. The terraces on the top floor are unusually large and feature easily removable screens between units. Removal of the terrace screens allows the entire top floor terrace to become one large party space which is used for annual summer dinners, impromptu gatherings, and the occasional wedding party.

Similarly, the parking garage has been retrofitted with a small urban gym and bike repair area. This isn’t glossy or marketable, but does add real intrinsic value for the building community. 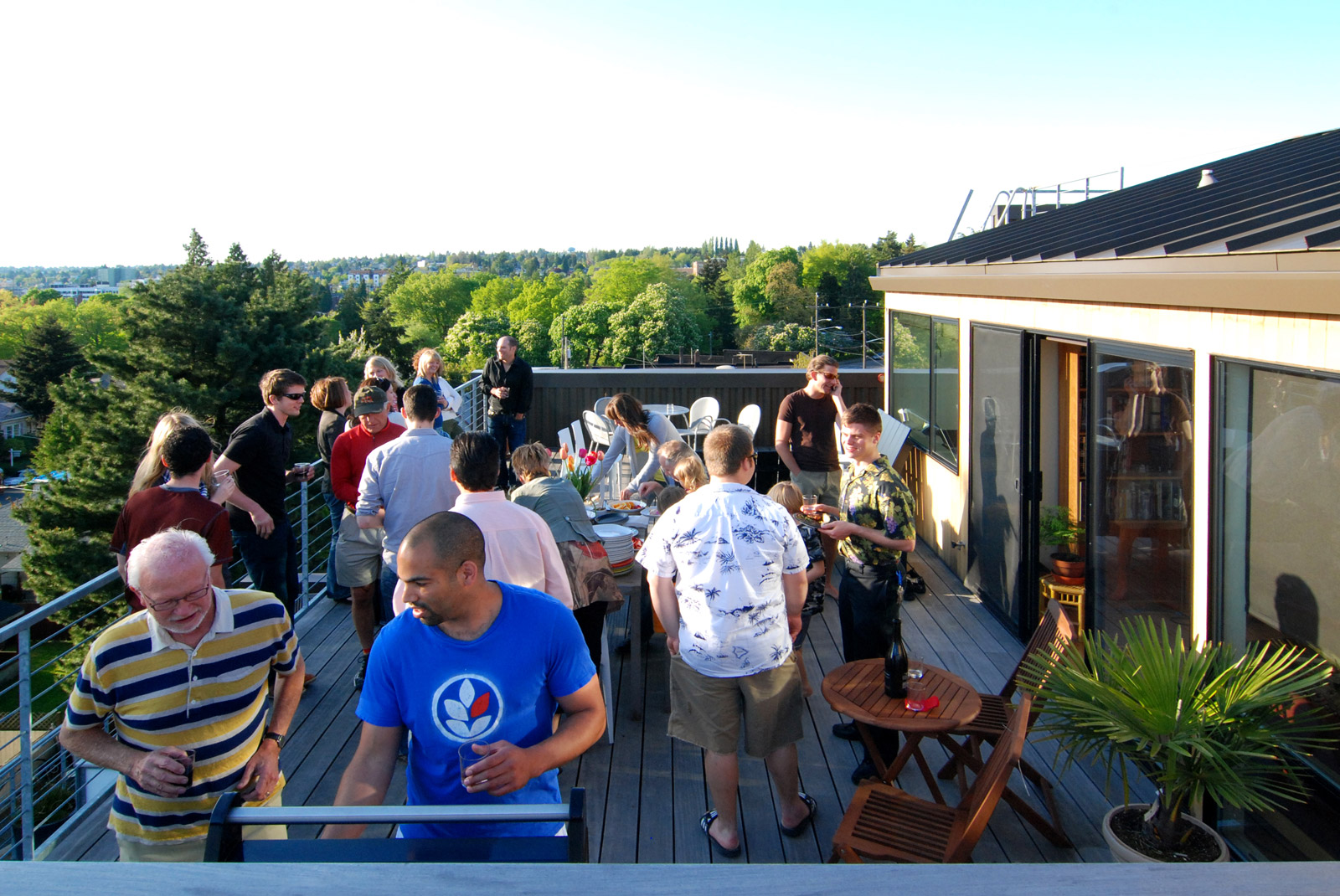 5. Get out in front of the development.
When a new project is beginning, it goes without saying that the community will be curious. While there is information on file at the city for a new project, this information doesn’t necessarily speak to the character and quality of a development. And once that Land Use sign goes up announcing a proposed development, people typically want a better feel for what will be built there. The internet is most people’s first step in the information gathering process, and this is a prime opportunity to direct them to well-curated information about a project. Without providing genuine data to engines like Google, the material gathered from an internet search is left up to chance or opinion, and often results in erroneous information. We’re constantly encouraging architects, builders, and developers to advance their social media presence. Building an online audience and staking out territory on the web can be a very beneficial communication tool. Once a social media presence has been established, information about a development can quickly gain traction and even become the primary source of that information on the web.

On this 8th anniversary of the BUILD Blog, along with subsequent social media platforms we’ve added to the fold, we’ve learned a ton about the power and value of these tools. A healthy following on the blog, as well as our Facebook, Twitter, and Instagram accounts allow any of our new projects to gain immediate traction online. These platforms allow a little known, early-stage projects to be introduced to a built-in audience and go on to attract a ton of web traffic. The resulting traffic translates to elevated search engine rankings, making it that much easier for anyone to find out about the projects with a casual search.

Stay tuned for our next post on development strategies, focusing on the specifics of building design and regulatory agency systems.