Shearwalls 101: Why You Can’t Have a Window There 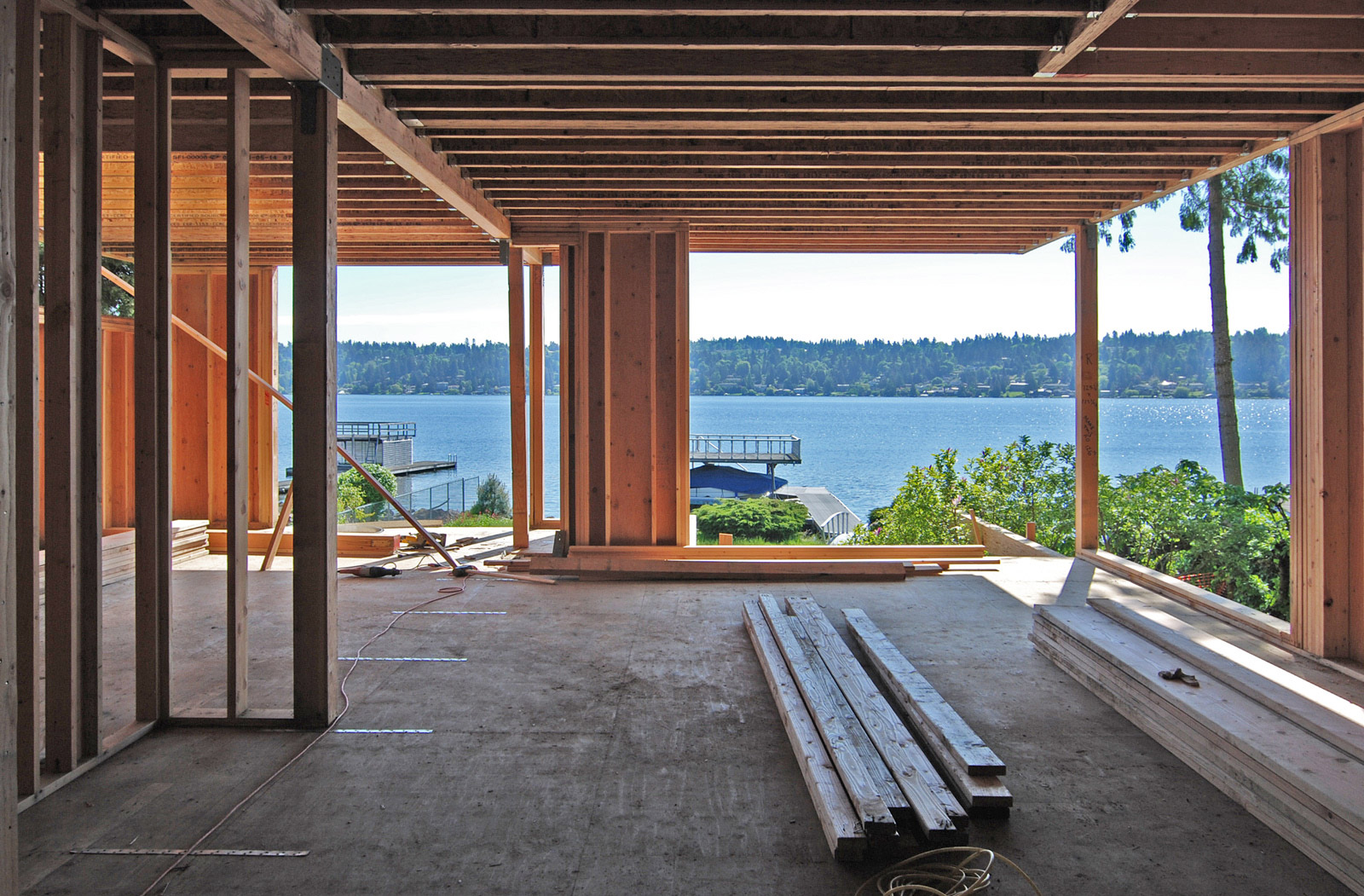 As important as shearwalls are to architecture, it’s surprising how unappreciated they remain in the design process of most homes. Moreover, it’s always discouraging to realize how few people (and sometimes even architects!) understand the mechanics behind shearwalls. For the amount of work shearwalls do, they get very little time in the spotlight of design conversation, in fact they’re usually only mentioned as a byproduct of where the windows can and cannot be located. We can’t help but think that this is a bit of an insult to shearwalls, as they do have their own Wikipedia entry and all. So to keep our structural Karma on the good side of lateral design, today’s post pays respect to shearwalls and explains why they’re so important.

A well-engineered shearwall resolves the lateral (wind and earthquake) forces on a house and directs those forces to the foundation, where they are resisted by the concrete and the ground. The magnitude of these natural forces varies depending on the region, proximity to seismic zones, exposure to wind, etc. Most people don’t realize that even in earthquake zones, wind forces tend to govern the design of shearwalls more often than seismic forces. In heavy winds, the walls of a house tend to act like big sails, and something needs to keep those sails in place. That something is not, we are sorry to say, big windows.

The diagram below shows a simple roof/floor and wall relationship. When wind or earthquake forces are applied to the house, the floors and roofs want to move sideways. In order to keep those roofs and walls right where they’re supposed to be, a sturdy connection to a shearwall below is required. 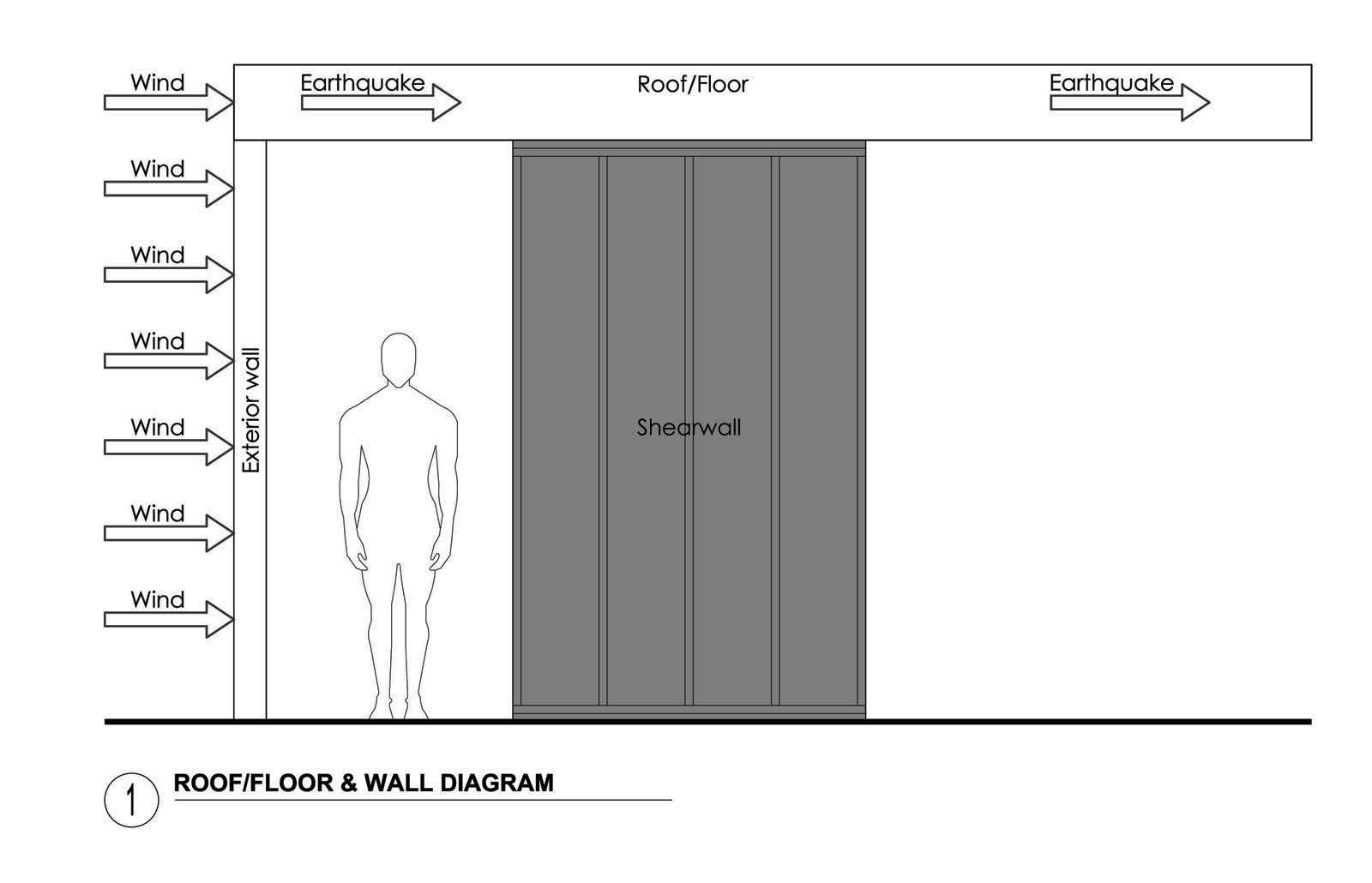 Getting the lateral force from the exterior walls to the roof or floor and into the shearwall is only one step in the sequence, though. Once the forces are distributed to the shearwall, the integrity of the shearwall itself becomes an important factor. The diagram below to the left shows how a shearwall resolves the applicable lateral forces applied to it. The connections between the framing (2x4s or 2x6s) and the sheathing (plywood) creates a wall member that works as one element (think of it like a big wood block). 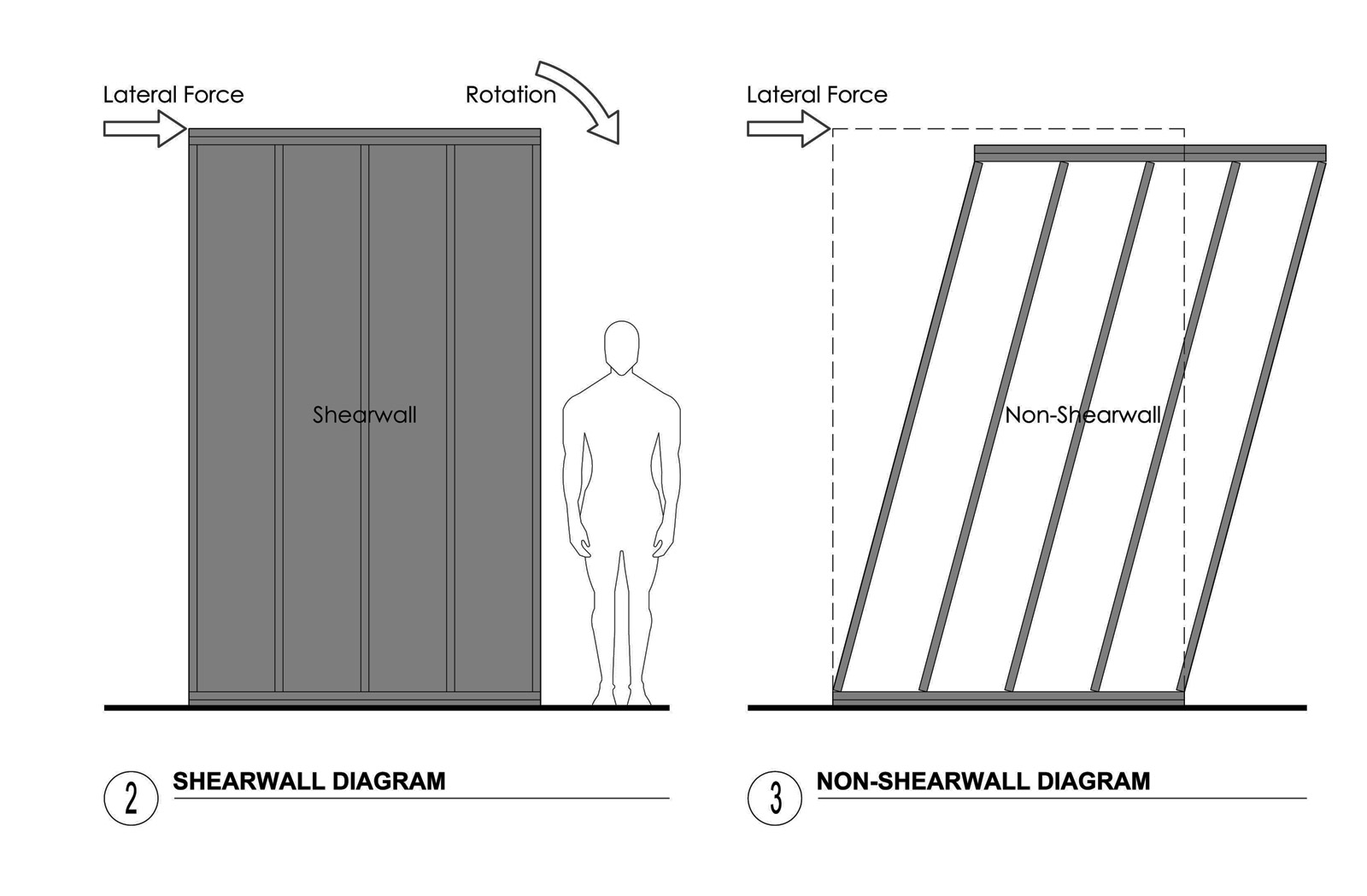 Without the sheathing, the wall fails to act as one member and the individual connections between framing members fail under the same lateral forces as in the diagram above to the right. When the shearwalls of a project are inadequate (or absent) and cannot resolve the load of the shifting weight above due to lateral forces, it can result in something like the image below. Garage doors, as it turns out, are not recommended in lieu of shearwalls. 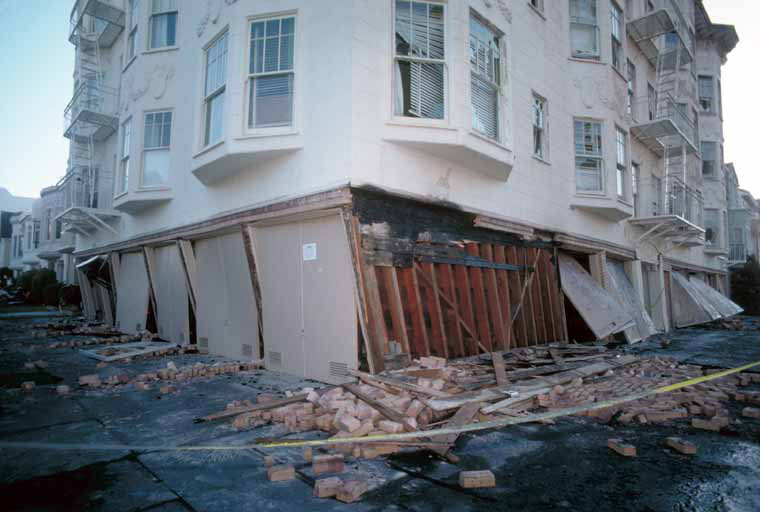 Wood has its limitations as far as shearwalls are concerned and there are certainly other solutions, but they come at an expense. Steel braced frames (below, left) are excellent at resolving lateral forces but they’re expensive and the diagonal steel members still get right in the way of the view. Moment frames (below, right) keep the structure to orthogonal lines, opening up the majority of the wall for that nice, big window, but the steel and labor involved puts a price tag on that window in the thousands (or tens of thousands) of dollars.

We also think it’s the job of a good architect to figure out elegant structural solutions within typical conventions; without the gratuitous use of steel, without throwing a bag of money at the issue. So back to wood …

There is an important relationship between the proportions of a typical wood shearwall; the taller it is, the more of a tendency it has to turn over when a lateral force is applied. In order to be effective, tall, skinny shearwalls either need to grow in width or the connections between the sheathing and framing members need to be increased. Increasing the connections typically results in larger nails at a greater frequency attaching the sheathing to the framing. As a general rule of thumb, shearwalls should have a minimum length of five feet. Shorter than that and you should plan on sending your structural engineer a bottle of something nice.

If we take a closer look at the shearwall diagram, you’ll notice that the lateral pressure of the wind or earthquake creates a rotational force on the shearwall. Because the shearwall acts as one member, the single force on the wall produces a compression force at one corner of the wall and a tension force at the other. This “couple,” as engineers like to call it, is reversed when the lateral force comes from the opposite direction. So both sides of the wall typically need to resolve a compression force as well as a tension force. As difficult as it is to resist making a joke about couples and tension, let’s stay on track here. 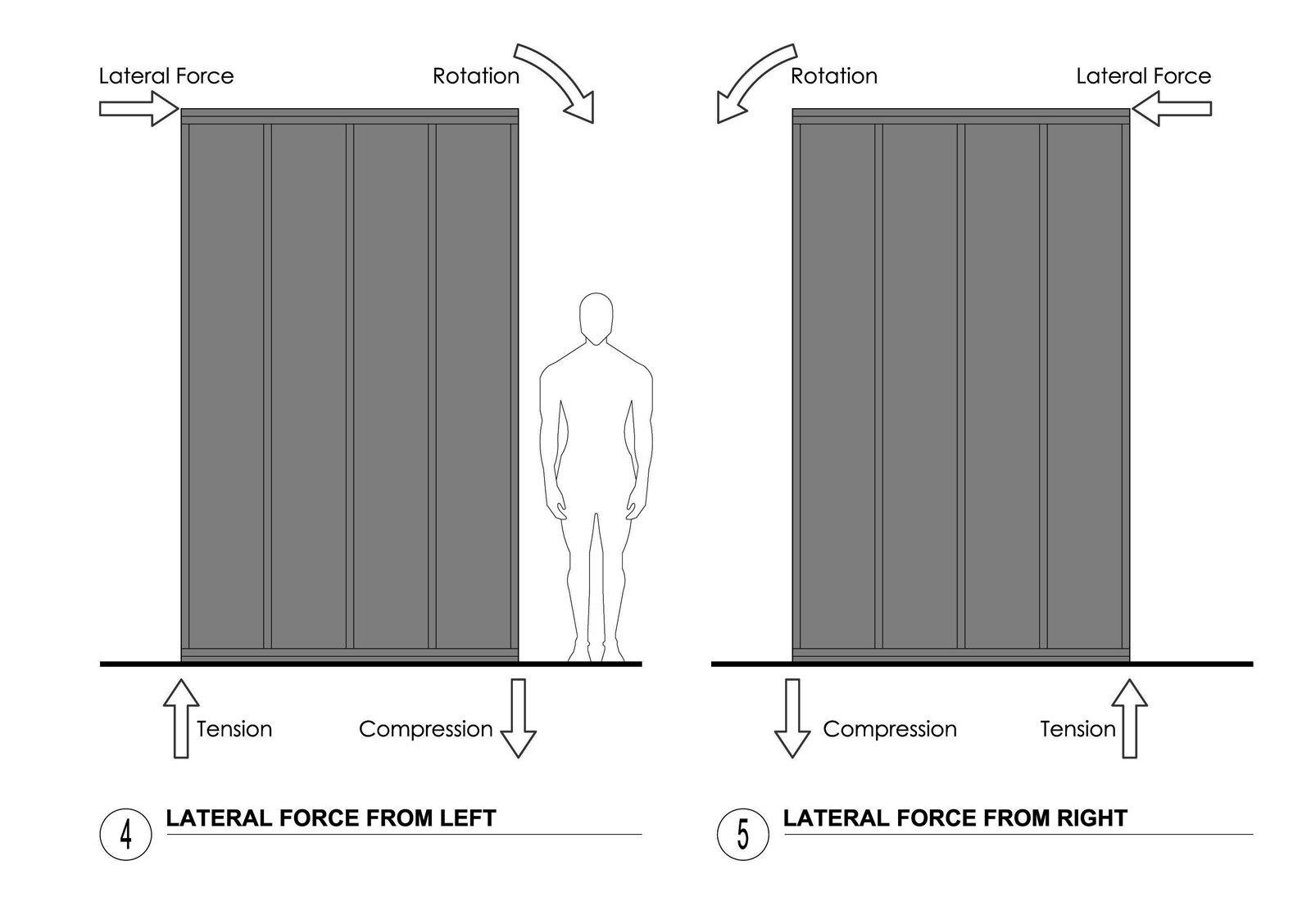 Compression forces in the shearwall assembly are resisted through columns (or studs in wood framing speak); multiple 2x4s or 2x6s typically satisfy most situations, 4x4s or 4x6s can be used for larger compression forces, and the occasional steel post is used for excessive conditions. If these posts sit on the foundation, they transfer the force directly into the concrete. If they sit on a wood framed floor, the load is transferred to the next floor down and resolved in a similar way until the force reaches the foundation. The photo below shows a very hard working shearwall with (8) 2×6 studs at the edge to resist the compression forces (in addition to picking up the gravity load of the beam above). 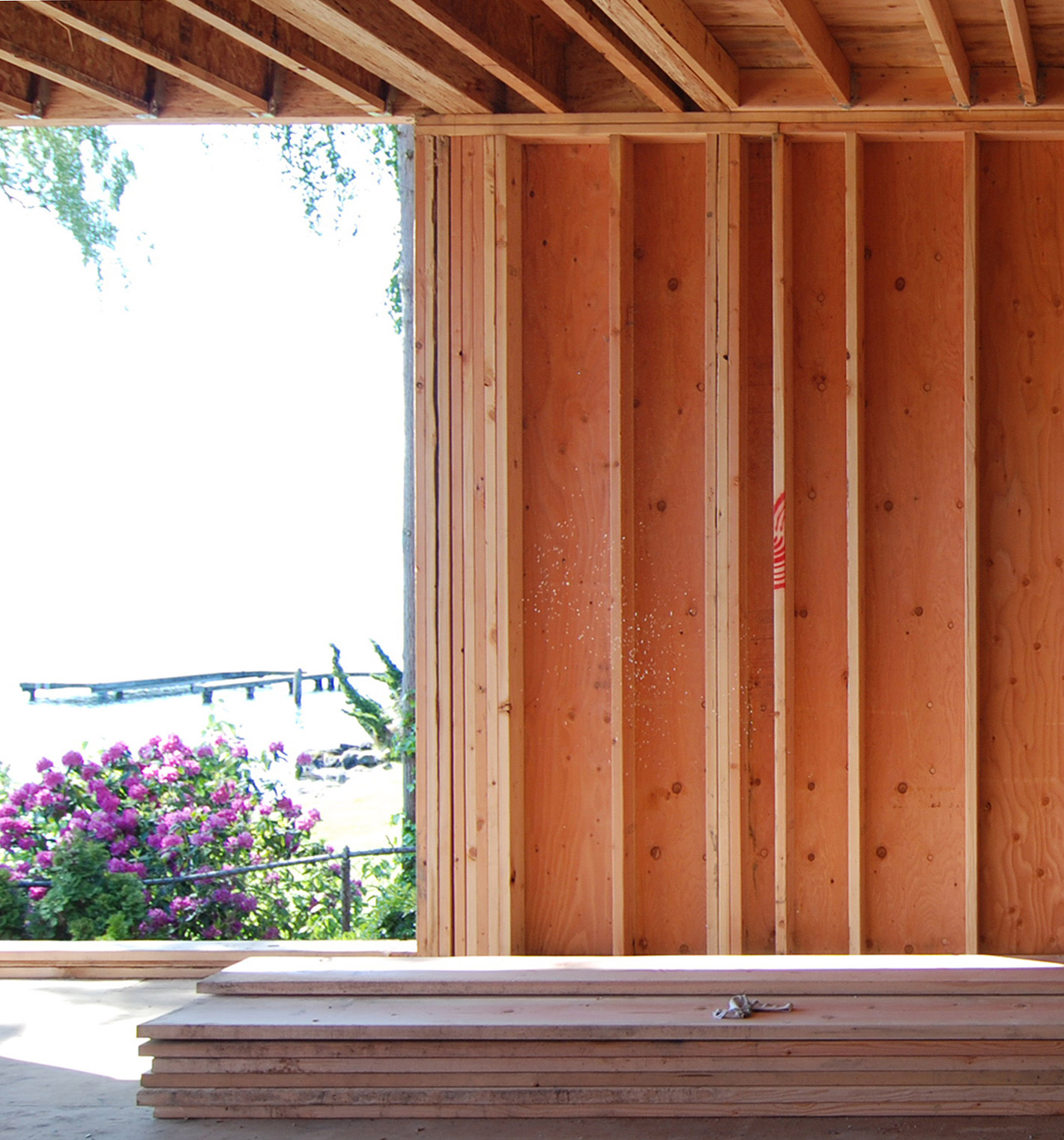 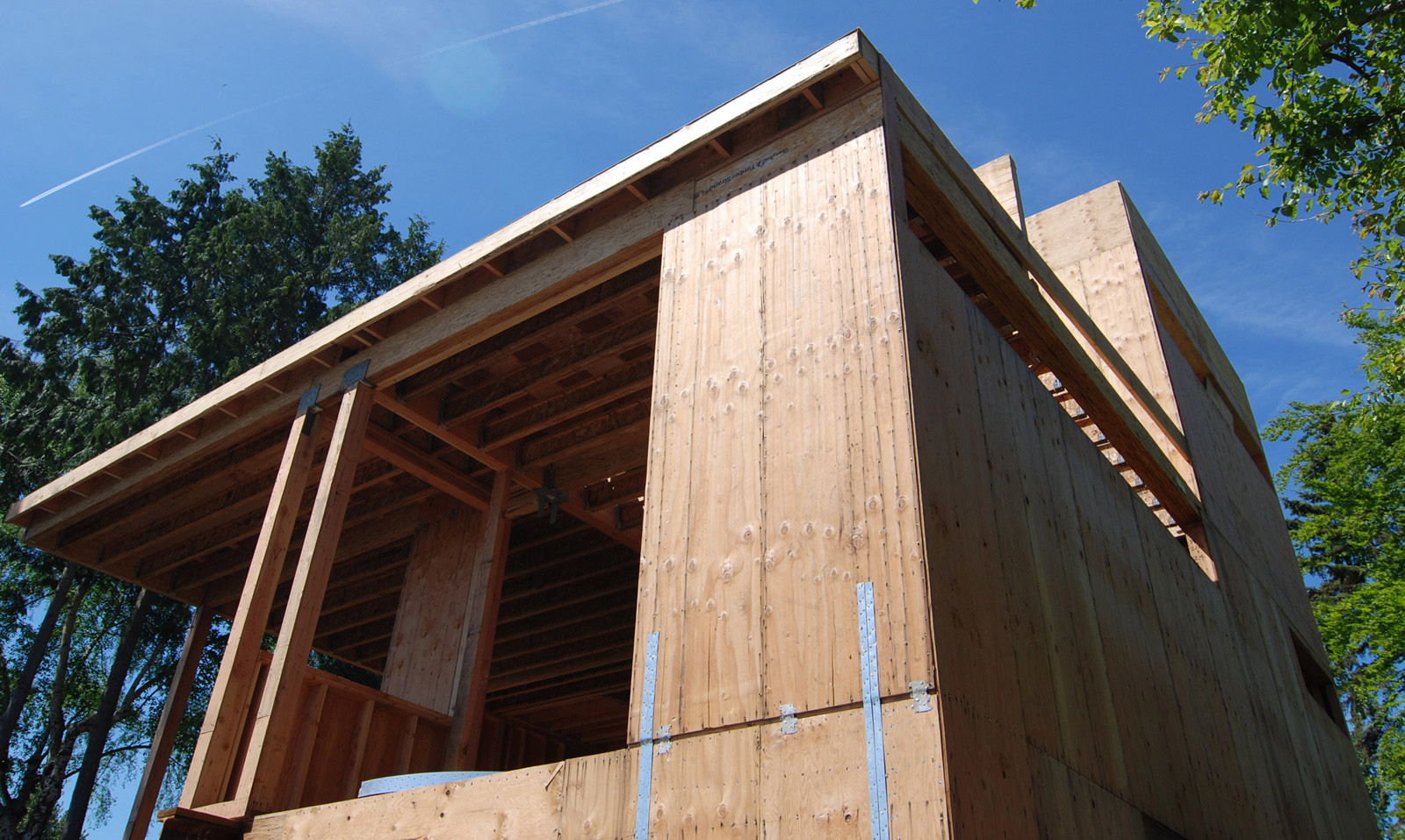 Most construction drawing sets include a shearwall schedule which indentifies the attachment specifications of several different shearwalls. The higher the shearwall’s number (SW1, SW2, SW3 …), the more lateral force it can resolve. This particular schedule goes all the way up to a SW7 — keep in mind that anything above a SW5 requires sheathing on both sides of the framing. This schedule calls out the attachment of sheathing to framing as well as the attachment of the wall on top and bottom. 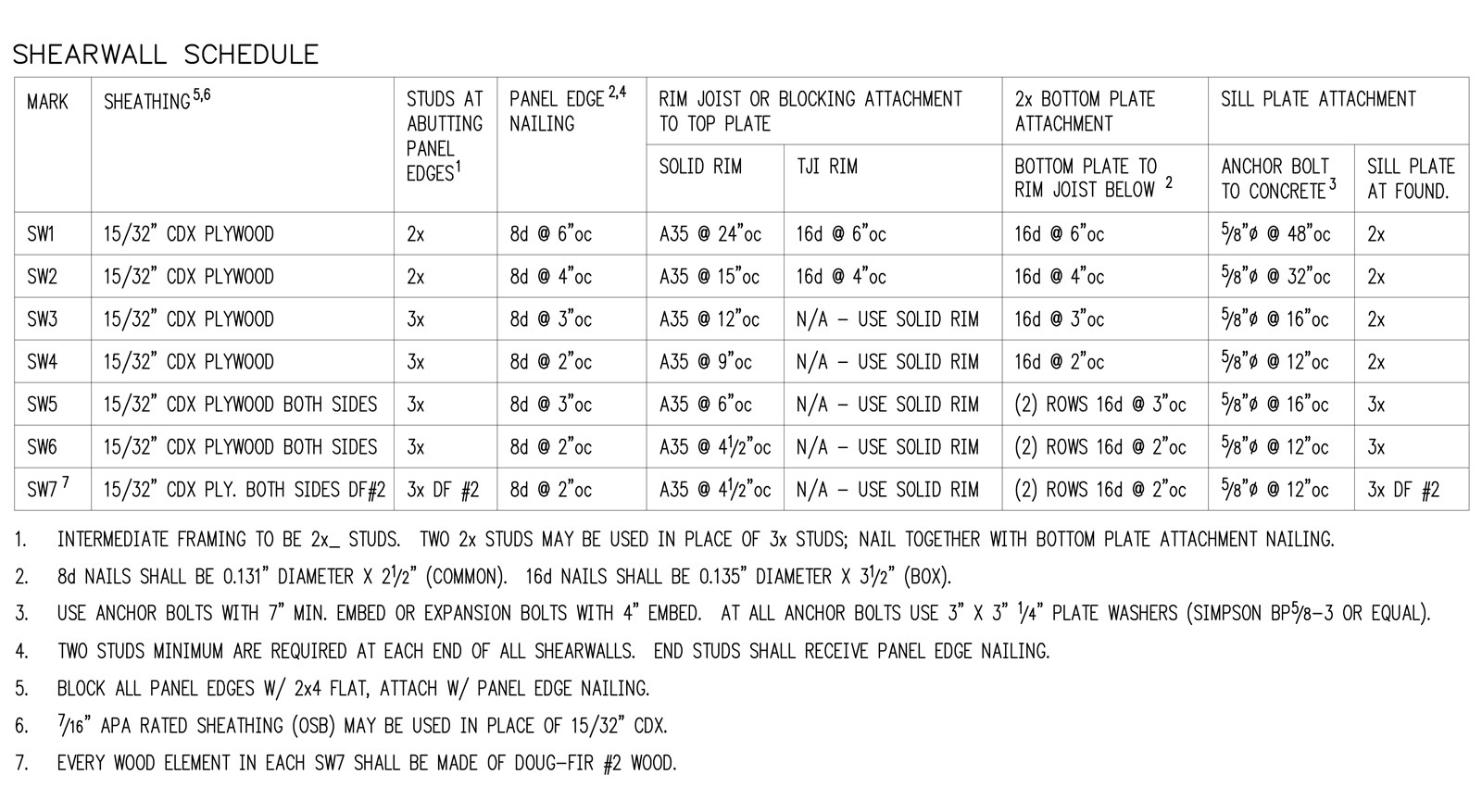 On multi-story structures, the forces from upper floors collect and add their forces to the lower floors all the way down through the structure. The lower floors must then resolve their own forces and the forces generated from above as outlined in this diagram. 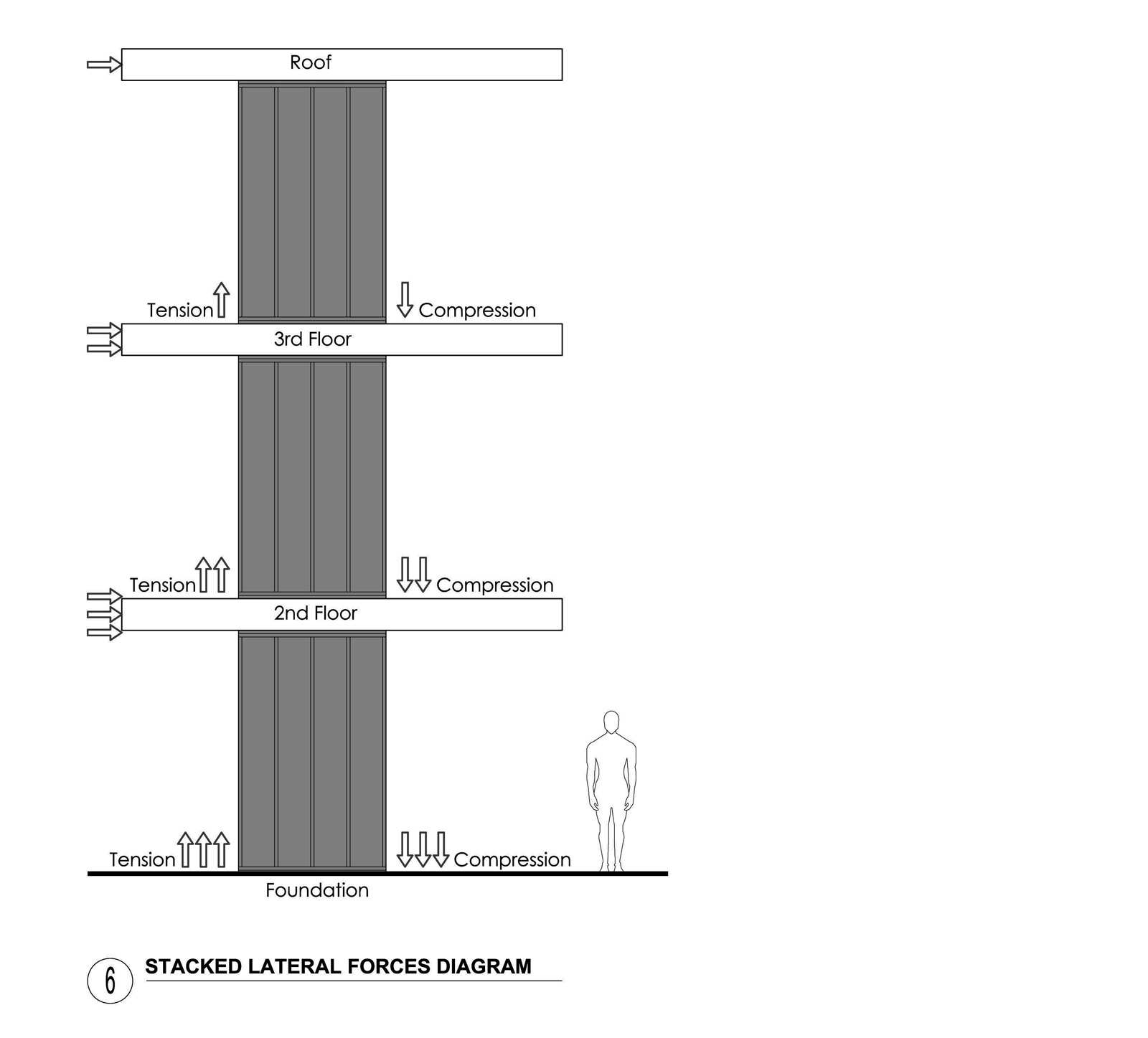 It should be apparent by now that there are numerous variables in the design, calculations, and construction of shearwalls. One tweak to the equation (like changing the width of a shearwall) creates a ripple effect and can change the requirements of other factors. Perhaps the single most successful strategy to deal with these variables is having a good relationship with an experienced structural engineer. A skillful structural engineer can design shearwalls that are effective and attenuated, leaving as much space as possible for doors and windows. For bonus points, an architect that understands the logic of structural engineering allows for clear communication and an effective design process.

So to summarize; no you can’t have a full window wall where you need to transfer lateral forces from the roof down to the foundation — without throwing bags of money at it. But if you approach the design process intelligently and respect the structural engineering, the shearwalls can most likely be smaller and smarter. Most importantly, don’t mess with mother nature — she cares less about your windows than you might think.