Home 2014 January A Design Guide to the Super Bowl

A Design Guide to the Super Bowl

With the Seahawks in the biggest pigskin tournament of the year, the football hype here in Seattle is in over-time. The week leading up to Super Bowl 48 (or XLVIII for you Romans out there) will be packed with animated sports commentators, statistics you didn’t know existed, and an abundance of uncertain projections.

One important ingredient of the Super Bowl production, however, will most likely go entirely unacknowledged: design. While it won’t be discussed much head-on, the products of talented designers around the world will be omnipresent in and around the Super Bowl. Everything from the stadium, and the promotional material to the logos and protective uniforms worn by the players has a design team behind it. Even products as simple as the tickets being hawked out front of the game have a designer to credit for their look and appeal. In fact, design may be one of the hardest workers of the event — quietly doing its job in the shadow of the athletic spectacle.

But don’t fear, in order to give design its proper recognition, this installment of the BUILDblog covers 8 (VIII) design players of the 2014 Super Bowl. If you’re a fan of the Seahawks or Broncos, these factoids should add another layer of entertainment to the game, and if you’re not, maybe these will help you get through the Super Bowl party you’re getting dragged to. Either way, enjoy. 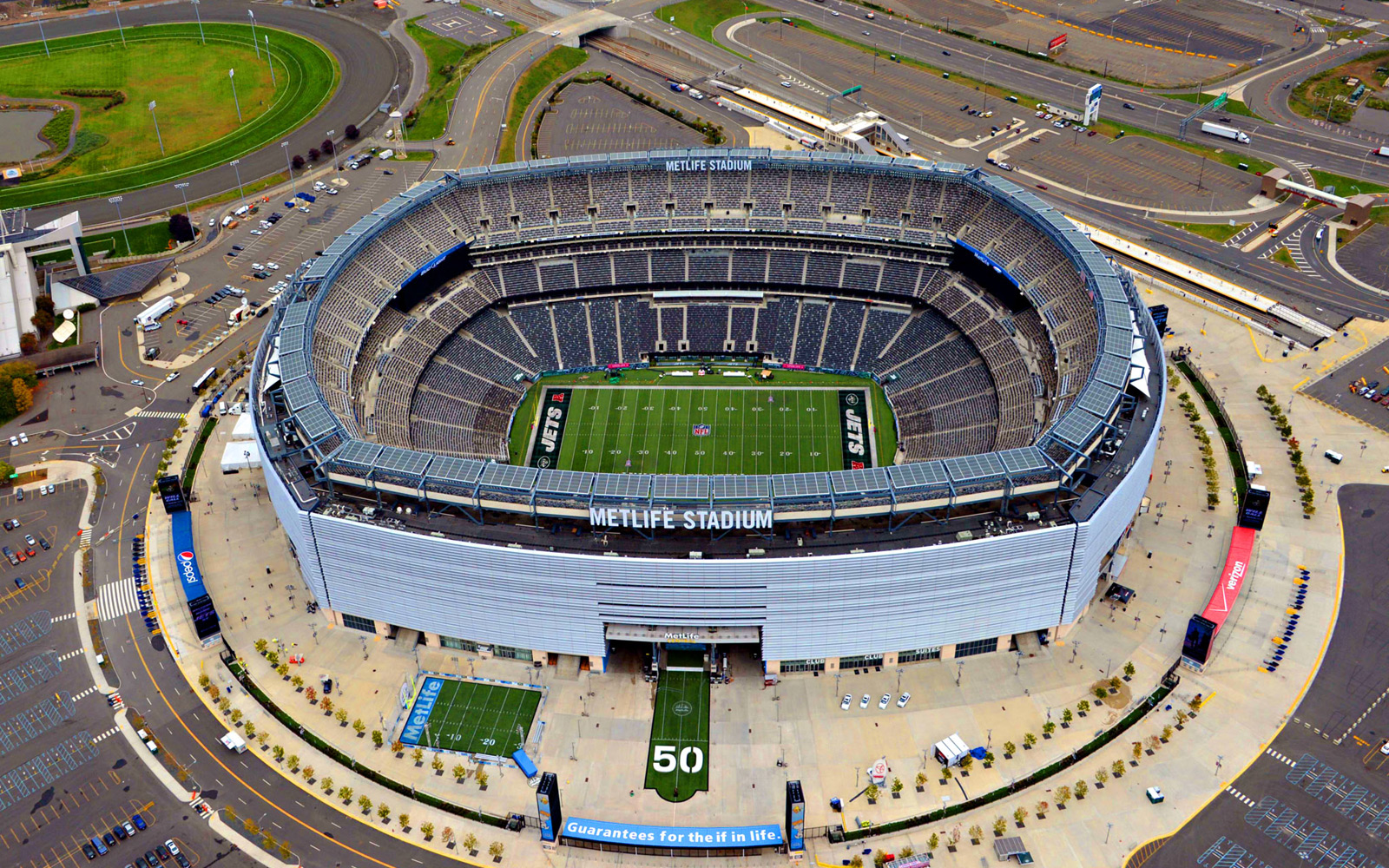 DESIGN DATA: Opened in April of 2010 and built for a construction cost of $1.6 Billion it is the most expensive stadium ever built. At 2.1 million square feet of space, the cost would equate to $762 per square foot. If you break the cost down by the 82,566 seats (the most of any NFL stadium) it comes out to $19,378 per seat.

DESIGN CHARACTERISTICS: The stadium is set apart by an outer skin of aluminum louvers and concealed lights which reflect changeable colors off the louvers. Lined up, end to end, the louvers would extend for 31.1 miles. The stadium touts its sustainability with a ring of 47 solar panels above the stadium’s catwalk which capture 314 kW of energy, the equivalent power required of 34 average residential homes per year. 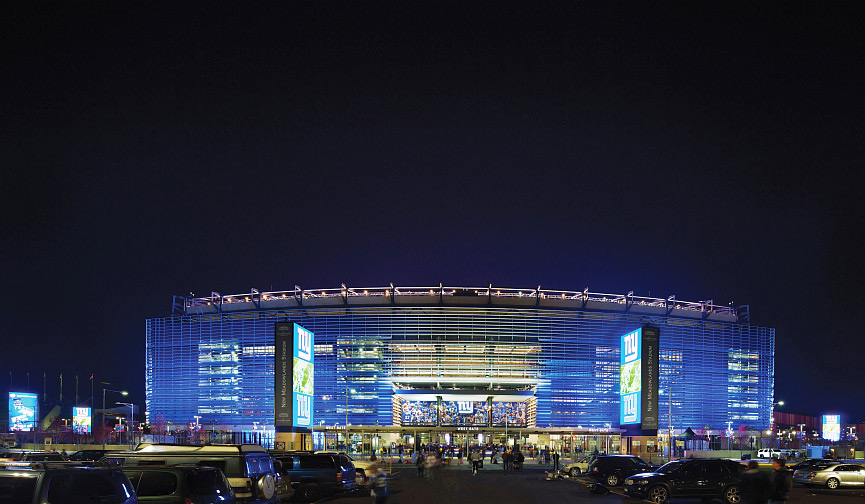 FACTOID: A suite at MetLife Stadium that will seat up to 33 people for the Super Bowl starts at $400,000.

THE NFL REGULATION FOOTBALL
DESIGNER: It is said that the American football design is an evolution of history more than design.

DESIGN CHARACTERISTICS: Historically, footballs were made primarily for rugby and were constructed from inflated pig bladders. In the late 1800s rubber bladders were introduced, however both the pig and rubber bladders were difficult to inflate and varied in size and shape. As the technology and quality control improved, the football retained its elliptical shape and the points of the ball were intentionally elongated (which helps with forward spiral passes). Since 1941 the Horween Leather Company has been the exclusive supplier of leather for NFL footballs. Although still referred to as “pigskins”, the modern football is made from steer hides tanned to a brown color and embossed with a pebble pattern for better grip. Before artificial lighting became standard in most stadiums, white leather footballs were popular for night-time games.

FACTOID (straight from Wikipedia): “In an NFL game, the home club must have 36 balls for an outdoor game or 24 for an indoor game, and they must be available for the referee to test with a pressure gauge two hours before the game. Twelve new footballs, sealed in a special box and shipped by the manufacturer, are opened in the officials’ locker room two hours before the game. These balls are specially marked with the letter “K” and used exclusively for the kicking game.” 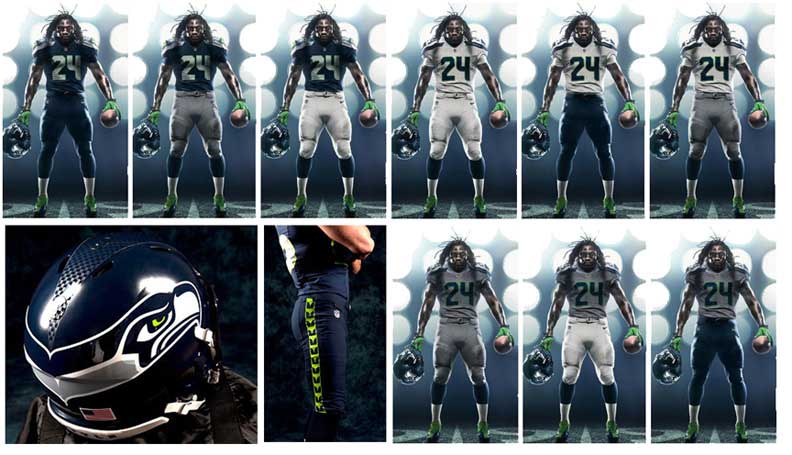 DESIGN DATA: The redesign of the Seahawks uniform uses Nike’s new Elite 51 Uniform as a base template and features Flywire technology to reduce weight and provide a precise fit. When compared with their Reebok predecessor, the Elite 51 is lighter, stronger, and vents more effectively.

DESIGN CHARACTERISTICS: A wing icon based upon northwest native art fills out jersey numbers, and repeats 12 times along the pant leg and around the collar, in honor of Seattle’s fans, collectively referred to as The 12th Man. The colors — shades of blue, green, gray, and white — relate directly to the team’s northwest environs.

FACTOID: In 2012, the manufacturer of NFL uniforms changed from Reebok to Nike. Out of the NFL’s 32 teams, only the Seattle Seahawks took this opportunity to make significant alterations to their uniforms.

DESIGN DATA: The sterling silver trophy is 22 inches tall, weighs 7 pounds and depicts a football in a kicking position on a three sided concave stand. Smaller replicas are made for each person on the winning team.

DESIGN CHARACTERISTICS: Prior to 1970, the trophy was inscribed with the words “World Professional Football Championship” and generally referred to as the world championship trophy. In 1971 it was officially renamed in memory of Vince Lombardi (June 11, 1913 – September 3, 1970), legendary head coach of the Green Bay Packers during the 1960’s, where he led the team to five league championships in seven years and won the first two Super Bowl. He is considered by many to be the best and most successful coach in NFL history. A new Vince Lombardi Trophy is hand crafted every year by Tiffany & Co. and the winning team maintains permanent possession of that trophy.

FACTOID: The Pittsburgh Steelers hold the most Vince Lombardi Trophies, with six.

DESIGN DATA: The first logo was unveiled in 1975 and the design was based off of the Seattle-area Native American culture.

DESIGN CHARACTERISTICS: In 2002 the logo was subtly altered, with an arched eyebrow and a forward-facing pupil suggesting a more aggressive-looking bird. More recent changes to the logo have replaced the Seahawk blue with gray.

FACTOID: Prior to the January 11th, 2014 game between the New Orleans Saints and the Seattle Seahawks, the Saints had the Seahawks logo painted on their practice field to better prepare themselves for the unique challenges of Seattle’s “notoriously raucous Century Link Field.” The Seahawks won the game 23-15.

BRONCOS LOGO
DESIGNER: the first original uniform designed specifically for the team was the creation of Bob Bowie of The Denver Post. With later versions presumably designed by the jersey suppliers Russell Athletic and Wilson.

DESIGN DATA: The current logo design has been referred to as the “Cyber-Horse” logo.

DESIGN CHARACTERISTICS: Is it just us, or does the 1960-61 logo not bear a striking resemblance to current Broncos quarterback Peyton Manning (who wasn’t even born until 1976)? Weird. 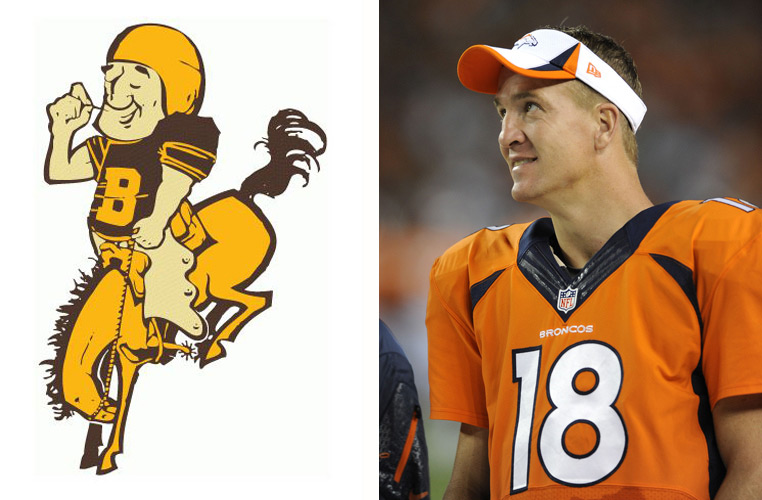 FACTOID: The brown and mustard yellow colors of the 1960-61uniforms included vertical striped socks which the public hated. Subsequently, the team held a public bonfire where cheering fans watched the socks go up in smoke. 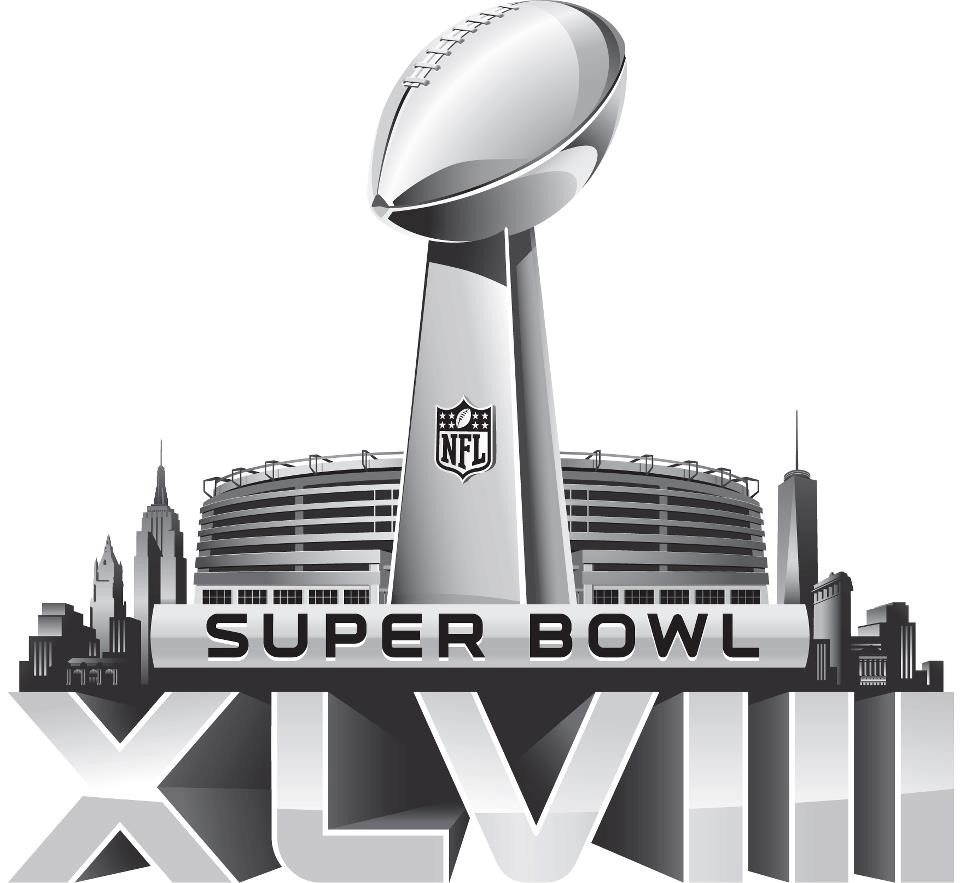 DESIGN DATA: Up until 2009, each Super Bowl Logo was uniquely designed. Starting in 2010 a standard Super Bowl Logo was established that allows the Roman numerals to change with each consecutive Super Bowl. The standardized logos also allow for a diagram of the hosting stadium and, in the case of the 2014 logo, icon buildings. 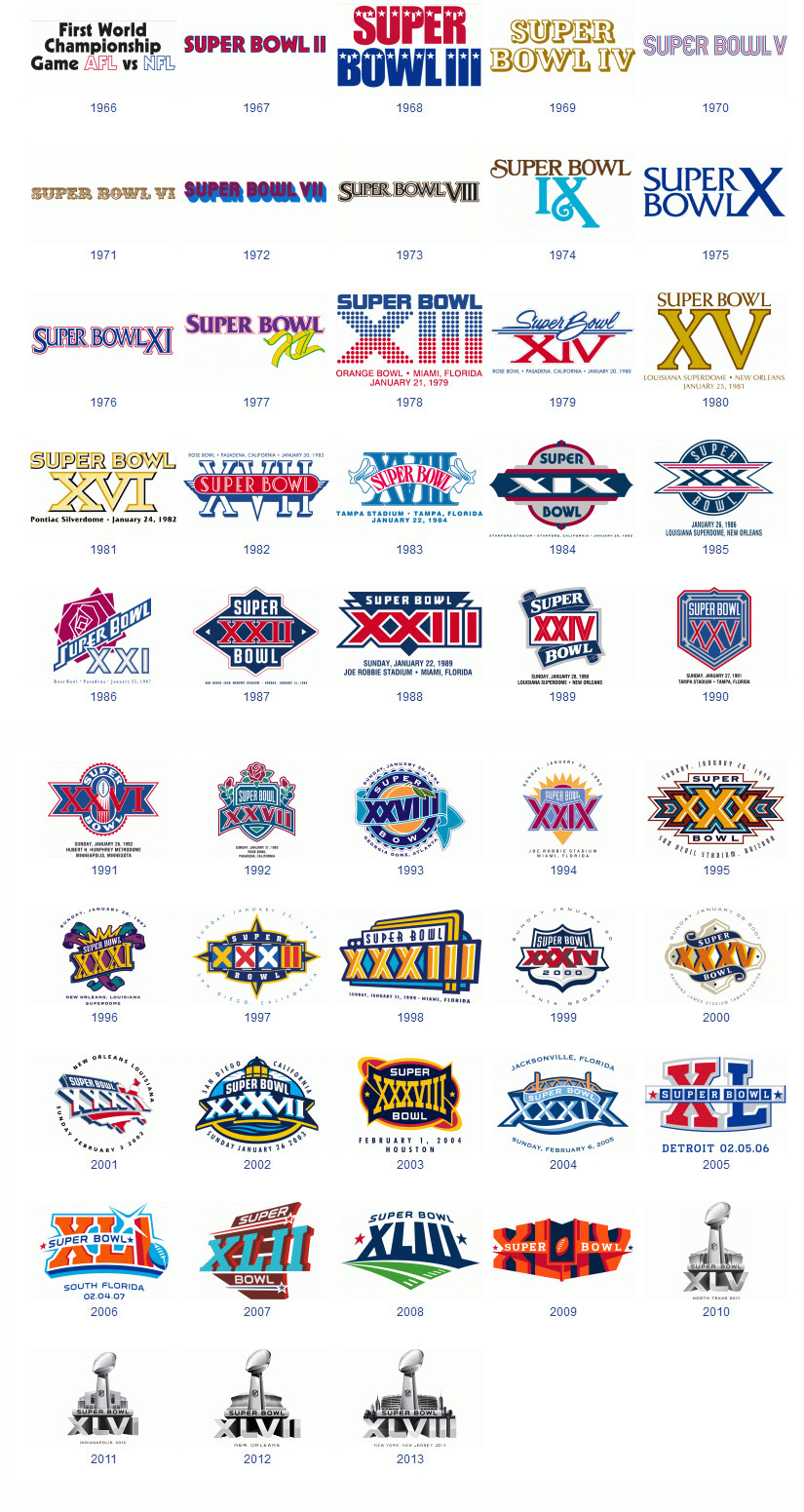 DESIGN CHARACTERISTICS: The Super Bowl logo prominently shows MetLife Stadium with a view toward New York City, featuring the Empire State Building, the Woolworth Building, One World Trade Center, the Flatiron Building, Grand Central Station, The NY Stock Exchange, and other lesser known buildings. It is said that the NFL decided to use a standard logo since 2010 to become more recognizable to a global audience.

FACTOID: The Super Bowl XLVIII logo is controversial because, while MetLife Stadium resides in New Jersey, it features an entourage of buildings in New York City. Criticisms focus on the lack of representation of the Garden State.

CLEAT DESIGN
DESIGN TEAM: Like the football itself, there is more than just one designer responsible for the footwear worn by football players. Credit for the original mud cleat football shoe points back to college coach Joseph Pipal.  In 1925  a pair of German brothers, Adolf and Rudolph Dassler, developed a cleat with replaceable studs. Today, the collaboration involves man and machine with the newest cleat to be revealed at Super Bowl XLVIII featuring a design created between the masterminds at Nike and their hard-working 3-D printer.

DESIGN DATA: The Vapor Carbon Elite, inspired by the physics of a shovel, features a v-plate cleat made from 3-D printed nylon, strategically placed at the toe and heel to enhance linear propulsion and lateral/backpedaling movement. A carbon fiber plate base maximizes energy output while Flywire cabling runs along the shoe for a secure fit.

DESIGN CHARACTERISTICS: Based on the Vapor Laser Talon, released in 2013, the Vapor Carbon Elite is designed to go beyond improving pure straight-line speed. The objective of the cleat was to reduce unintentional slippage at the zero step.

FACTOIDS: Brothers Adolf and Rudolf Dassler had a falling out after WWII and went on to create two separate football cleat companies: Adidas and Puma, respectively.

Congrats to both teams and cheers to the rest of you!