Architecture of the Olympic Games

It’s that time again, when the world’s best athletes descend upon one city to compete for shiny medals, national honor, and worldwide fame. We all have our favorite events to catch, but as architects and designers our attention (not surprisingly) veers towards the unique built environment of the Olympic Games. An event like the Olympics draws some of the most talented architects, engineers, and artists who spend years designing and building structures for the attention-grabbing event. The structures have a reputation of being beautiful, functional, and, in some cases, temporary. Then there’s the fascination of a mini city being built every four (or two if you count the Winter Games) years: flashy event-centric buildings as well as the infrastructure needed to support them.  Here’s our quick look at ten of our architectural picks at this year’s Olympic Games in London.

1. The ArcelorMittal Orbit by Anish Kapoor and Cecil Balmond

It’s red. It’s curly. It’s tall. (Taller than the Statue of Liberty, to give it some scale.) The Olympic Viewing Tower is a permanent structure that was a collaboration between Turner Prize-winning artist Anish Kapoor and renowed structural engineer Cecil Balmond, and stands at 115 meters– now the tallest piece of art in the entire UK.

This 80,000 seat centerpiece of the Games was designed to convert to a 25,000 seat stadium for use after the Olympics conclude. The trend in Olympic architecture is moving towards the flexibility of use during the high-volume event and ease of conversion to an appropriate scale for permanent use. 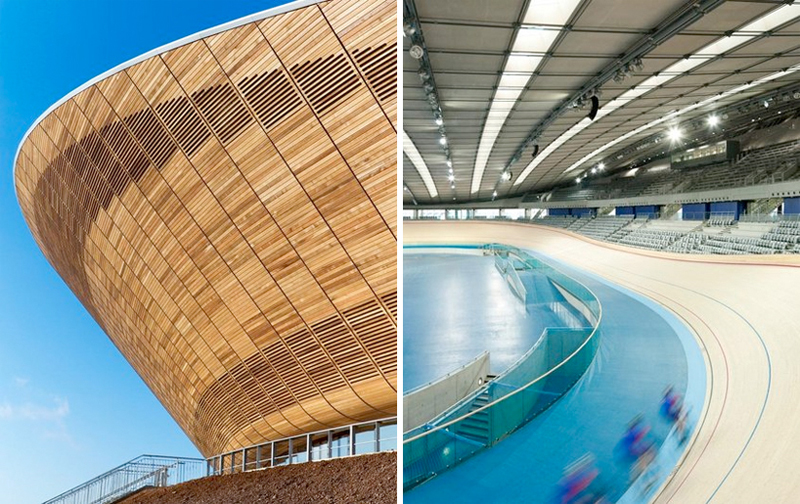 Referred to as The Pringle due to its chip-like form, this permanent structure boasts a laundry list of features making its mark not just as the first structure to be completed for the games, but also as one of the most sustainably designed. Notable features include 100% natural ventilation and daylighting design to reduce lighting costs.

This temporary structure was designed to have two-thirds of the materials recycleable or reuseable. And to add a cradle to cradle philosophy to the sustainability measures, there’s talk that the chief of the 2016 Olympics is interested in using the structure for the event in Brazil.

[Image source: Flavorwire and The Guardian]

The Shooting Gallery consists of three temporary double-curved membrane structures. Geometrically nothing more than a white box, each structure features an accent of color resembling a bullet puncture, which possess the dual function of tension nodes and ventilation or door openings. 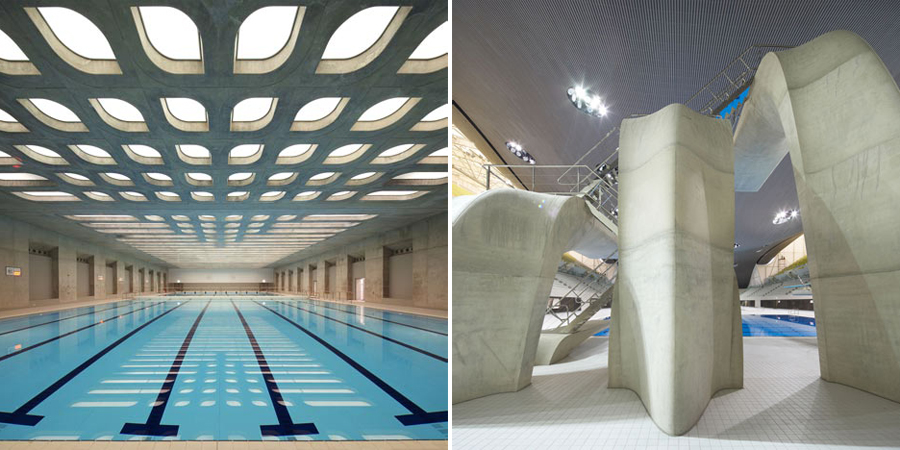 The last of the permanent structures to be built, Zaha Hadid’s Aquatics Centre design takes advantage of the sculptural nature of the sports which will be in competition within the space. Petal-perforated ceilings and wave-like diving platforms will make watching the aquatics events as attention-grabbing for the athletics as for the architecture. And staying in line with the adaptability of the Olympic buildings from event to everyday, the side wings housing practice and training pools will be dismantled, leaving the central pool to remain for permanent use.

If you weren’t aware handball was a hot enough sport to necessitate its own structure at the Olympics, you’re not alone: Neither were we. But the subdued, elegant, and highly sustainable Copper Box will be a permanent fixture in London well beyond the Games. Not to be outdone by the more flashy looking Velodrome, this arena boasts solar tubes, rainwater harvesting, recycled copper panels, and bricks composed of construction dust. 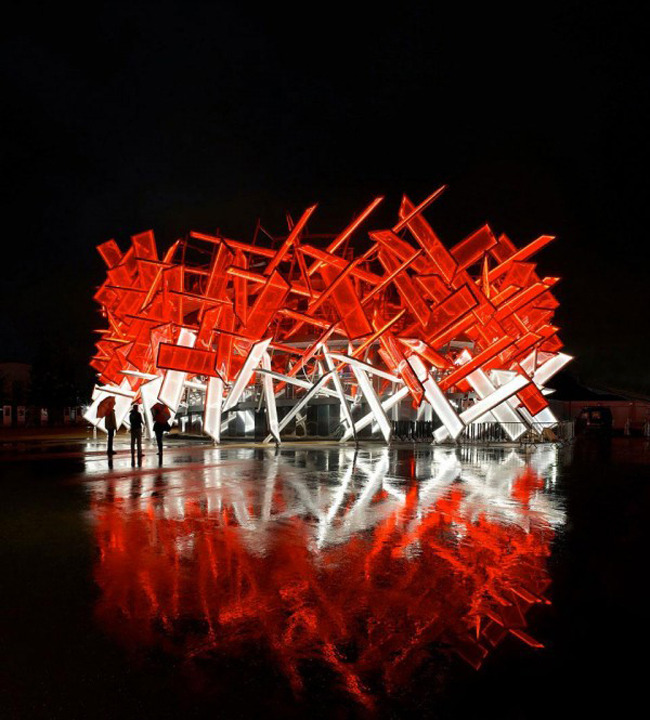 This temporary pavilion, though not a structure for athletic events, is worth a closer look (and for those lucky enough to be at the Games, a chance to interact). It functions as an interactive beat box, allowing visitors to trigger sound as they move around and in the structure. Materials are designed to reused, which seems to be the new normal at these Games. We’re all for it. 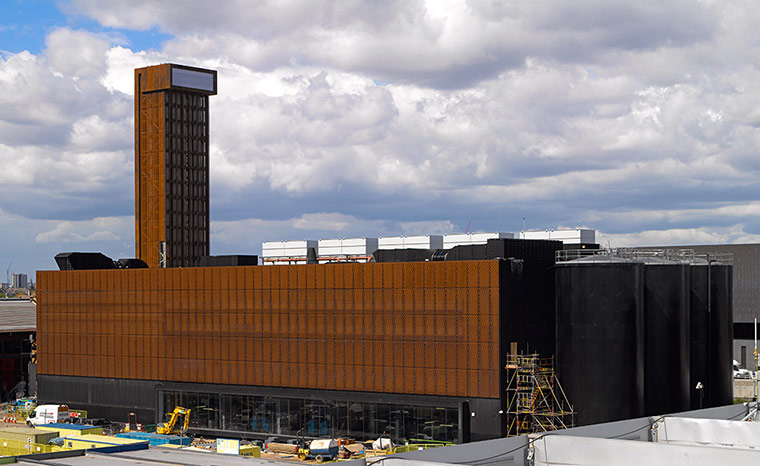 Another non-athletic event structure, the Energy Centre, is not only a vital part of the Olympic Village infrastructure, but is a thoughtfully designed utility building which will continue to serve the surrounding area after the Games. The systems within consist of energy-efficient gas boilers as well as a biomass boiler using wood chips, providing low-carbon heating and cooling for the Games. The standards of sustainability at the London Games are clearly setting a new precedent, and the greatest impact comes from the mechanical systems. Not as sexy as some other “green” measures, but unarguably some of the most substantial moves. 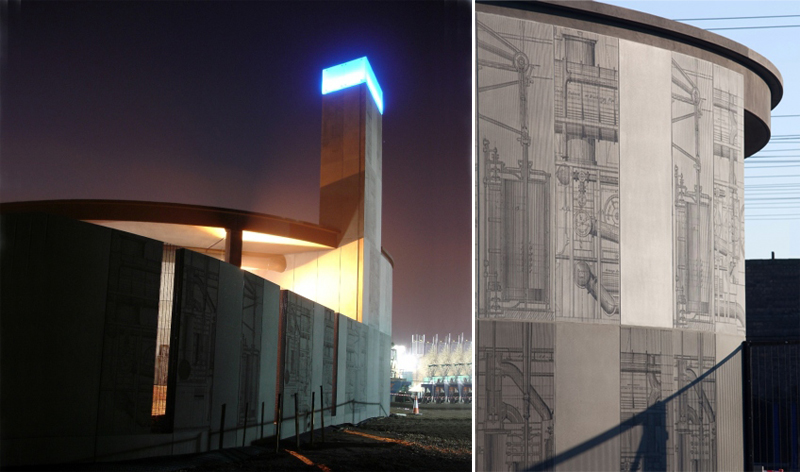 The final piece of architecture that makes our list is also a service building without which the Olympics would not be possible. And as boring as this building could have been, the designers rose to the occasion and created a structure that makes you want to pay attention (to some extent) to the current and historical plumbing systems in London. It’s even acquired an affectionate nickname: Pink and Perky. Engineered to connect to London’s existing sewer system, the efforts towards high design on the Pumping Station has paid off, winning numerous awards for design and sustainability excellence.

There’s plenty more design going on at the Olympic Games we’ve likely missed. If anything’s come across your radar and not ours, let us know in the comments.