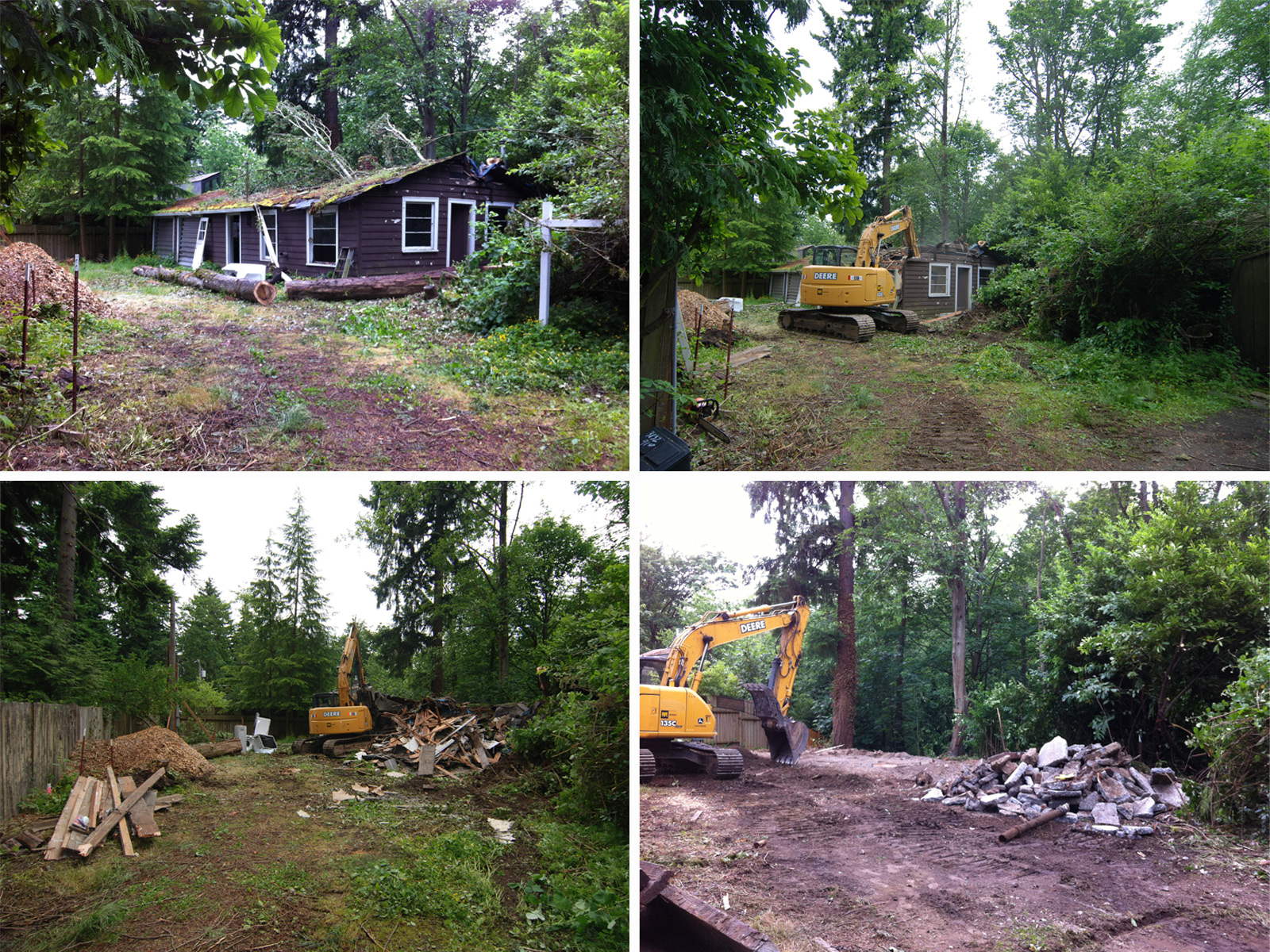 Last week, we unveiled our Case Study House, giving you a little taste of what we’ve been up to.  The existing house, having served its previous owners and later a variety of woodland creatures for over half a century, was successfully demolished, the site cleared and excavated over the last week.  Here’s a quick hit at some key observations we gained on the CSH construction site. 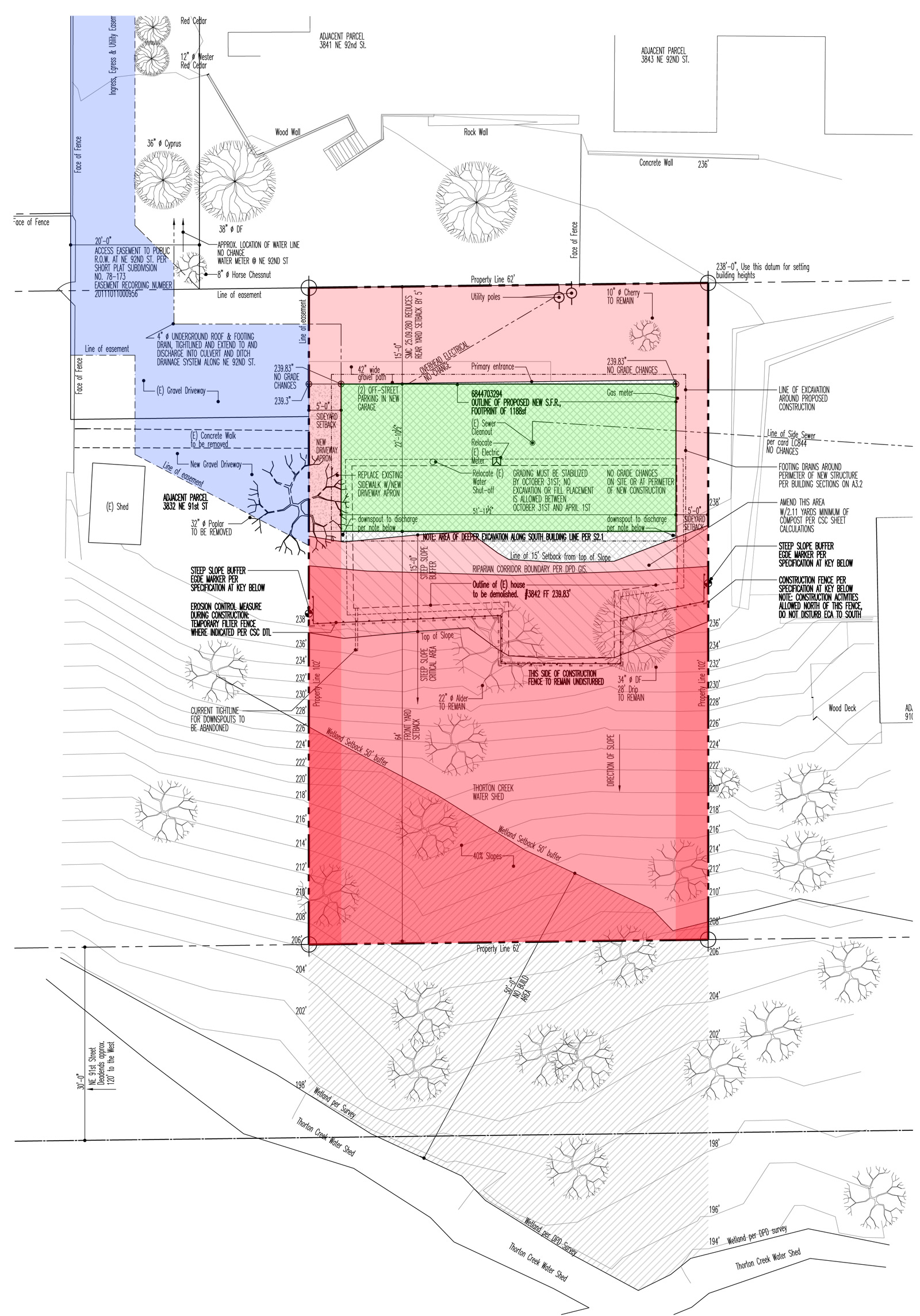 1. There’s no such thing as the perfect lot.
A new single-family residence built on an affordable site in the city. Sounds impossible? Well, we’ve found that it’s possible, but it comes with some expected (and unexpected) baggage. As with any piece of property, the usual suspects show up: setbacks, existing trees, possibly a utility easement. Throw in a 130 ft access easement, and then add a wetland setback, a riparian corridor boundary, and a steep slope setback on top of that. Put them all together, overlay and analyze them, and you can find just the right amount of building footprint, coming in just shy of 1,200 sf.

2. This old house.
In our case, the existing house is just a bit over 60 years old, has been sitting unoccupied for at least a couple years, and neglected for longer than that. So we were bound to uncover some treasures and other time capsule-esque surprises. A mini-junkyard? Check. Animal squatters? Check. Folklore involving a reclusive bluegrass singer of prior fame? Check. Ghosts? Nope, maybe next time. In short, you never know what you’re going to find on site, but it is likely not going to be gold bars. Be prepared for anything. 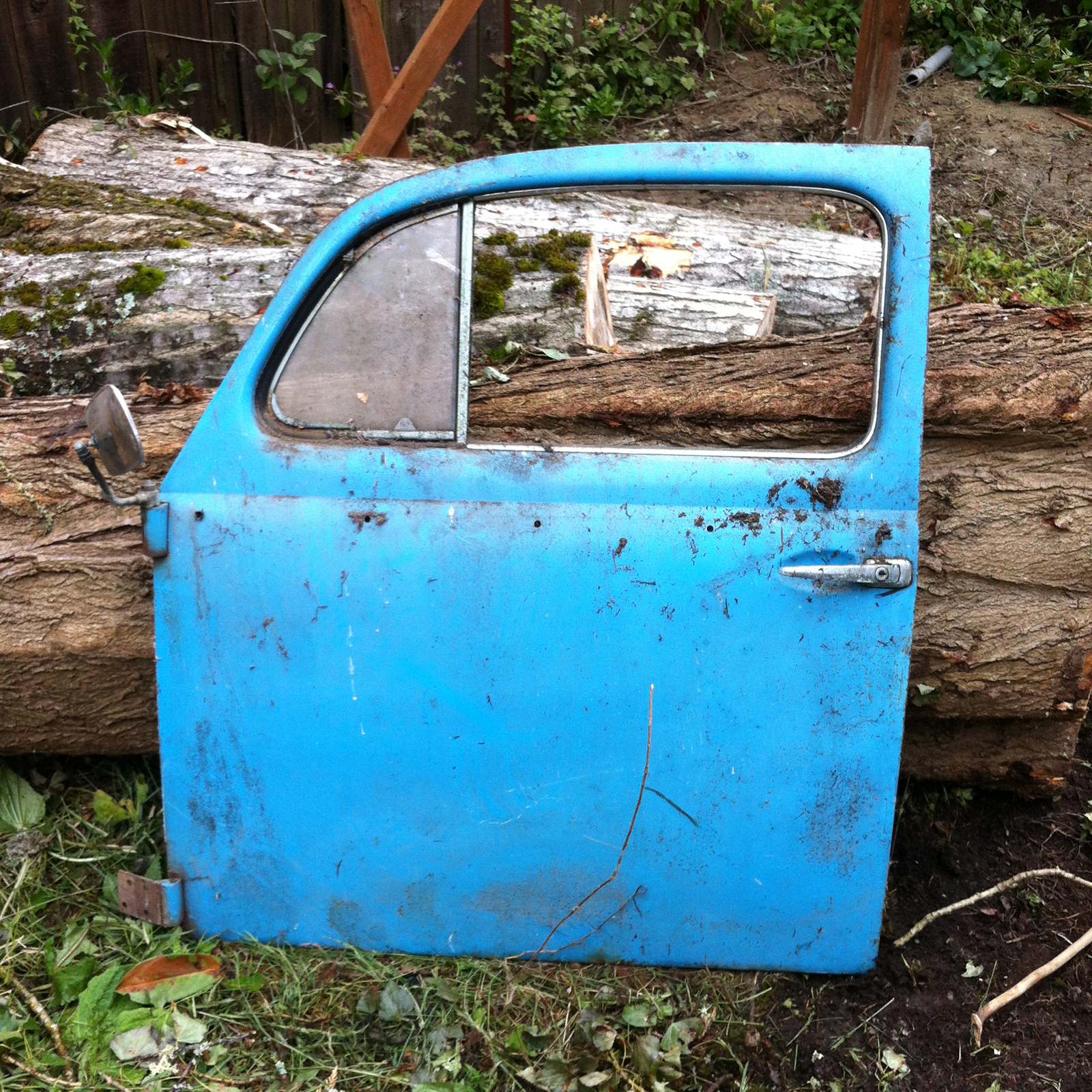 3. Leave it better than you found it.
Aside from clearing out the rusty relics and shooing away the four-legged squatters, there were issues with the existing structure’s relationship to the site that, with the construction of the CSH, are being improved upon or eliminated. The previous structure was precariously perched on a glorious bluff, at the cusp of a steep 40% slope. At some point, an appendage was added on the south end which, from what we could tell, was questionably constructed to cantilever over the slope. The placement of the original house on the site had many issues, and half the house was hanging out in a now-enforced steep slope setback. Locating the new structure the required and healthier distance from the slope mitigated these site conditions considerably, and during construction, fencing off the sloped portion would prevent further damage from occurring, ensuring that the future home would enjoy the re-vegetated slope.

4. Gravity doesn’t always win.
Guided by logic, the relocation of the new structure on the property to clear the steep slope buffer and create a natural drainage course to find it’s safe way to Thornton Creek below, well, that logic  didn’t fall in line with the city bureaucracy. Instead, we’re required to dig a new connection to the City’s storm water drainage system at the street. Yes, the street that’s located up the 130′ access easement. Intuition, and gravity, don’t always win, but ultimately, we have a fine solution for our storm water. 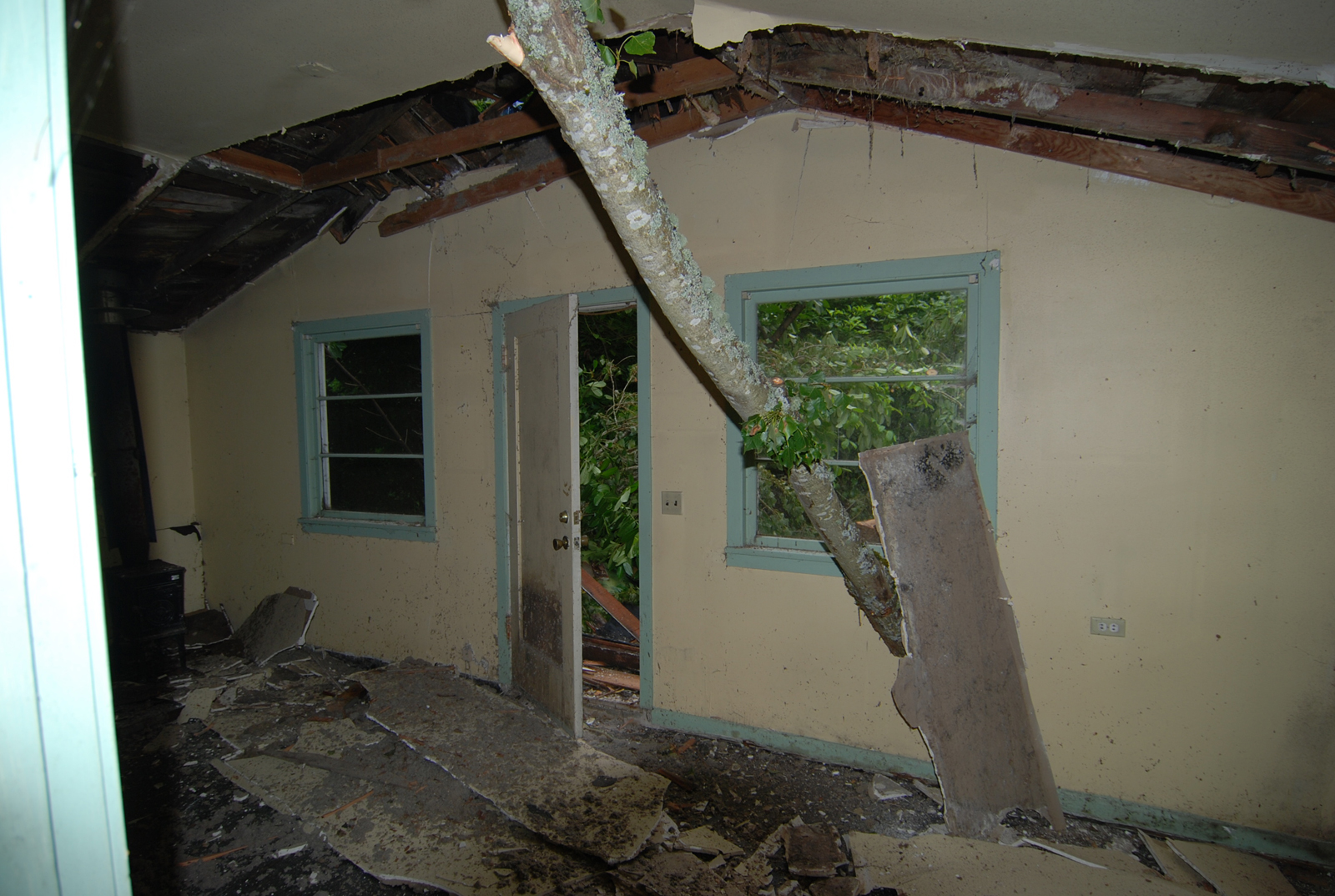 5. Not all trees can be hugged.
The property was, and still is, quite vegetated. In fact, a partially felled tree just to the west of the existing home appears in some photographs to be one with the house. Nature was clearly trying to take this house back into the earth, offering a lush, native, and unintended green roof. But the roof and the tree had to go, along with a few other small ones that were just a bit too close to the house and existing sewer line.  Fortunately, these were the less desirable, crowded trees, and their removal created adequate space for the remaining trees to thrive.

6. Your site is a salvage yard—use ’em if you got ’em.
With the entire structure slated for demolition, we found an opportunity to grab salvageable materials to be used on another project we have in the works right now. We lucked out on some heavy timber members reclaimed from the tacked-on addition. (Keep an eye out for those reappearing on a future post.) And it turns out the timbers were reclaimed previously as well. A small example of cradle to cradle to cradle. While we realize salvaging materials isn’t always possible or practical, in this case it was a no-brainer: We were looking for something weathered and salvaged for another project, and long-term storage wasn’t going to be any real concern. 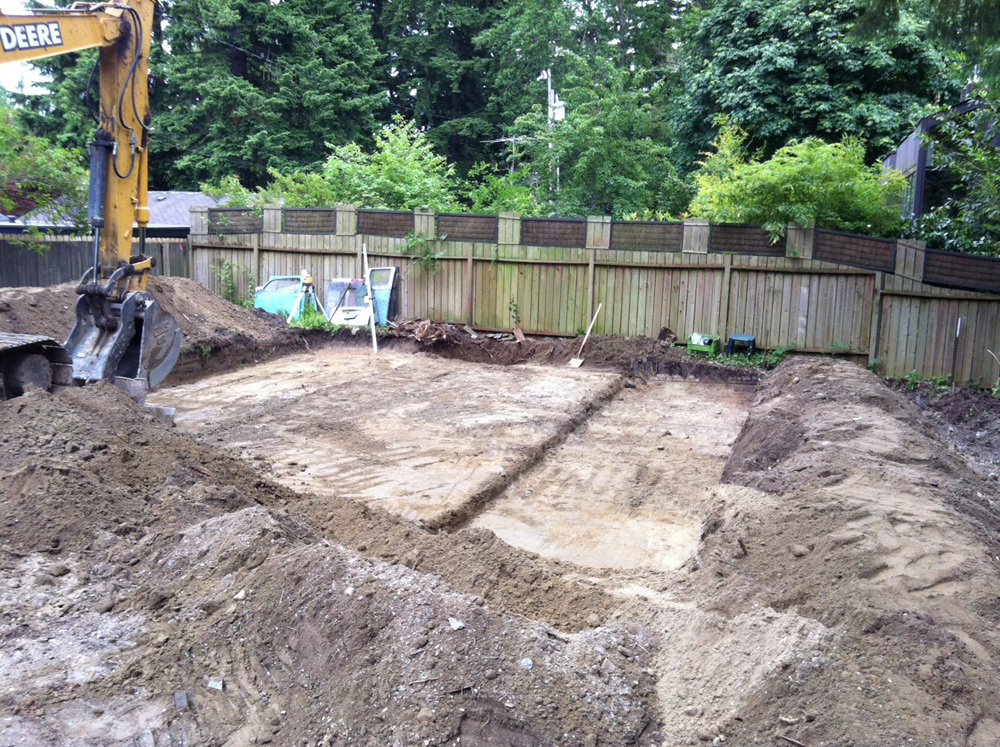 7. The dirt on demolition.
The existing single-story home with a partially demolished roof (thanks, nature!), proved to be a relatively quick and dirty undertaking. The considerations involved in remodeling an existing structure or reusing an existing foundation (which, of course, have their merits) and their associated unknown factors aren’t an issue when you’re starting from square one. For the Case Study House, rebuilding on any part of the existing structure just wasn’t an option, so down it all went.  When building from the ground up, it is reassuring to have an intimate knowledge of the dirt upon which the new structure will be placed.

8. Get it right from the start.
Staking and excavation went without a hitch. With the Case Study House, we had little-to-no margin for error, and any error from the get-go would be disastrous. Measure twice, cut once—wisdom to live by. A quick call and our surveyor came out to the site and verified corners of the property to ensure accuracy before we marked our corners. We’ll be discussing more on the foundations in the next installment. In the meantime, you can check a recent post where we covered some basic tips for prepping and pouring a new foundation. 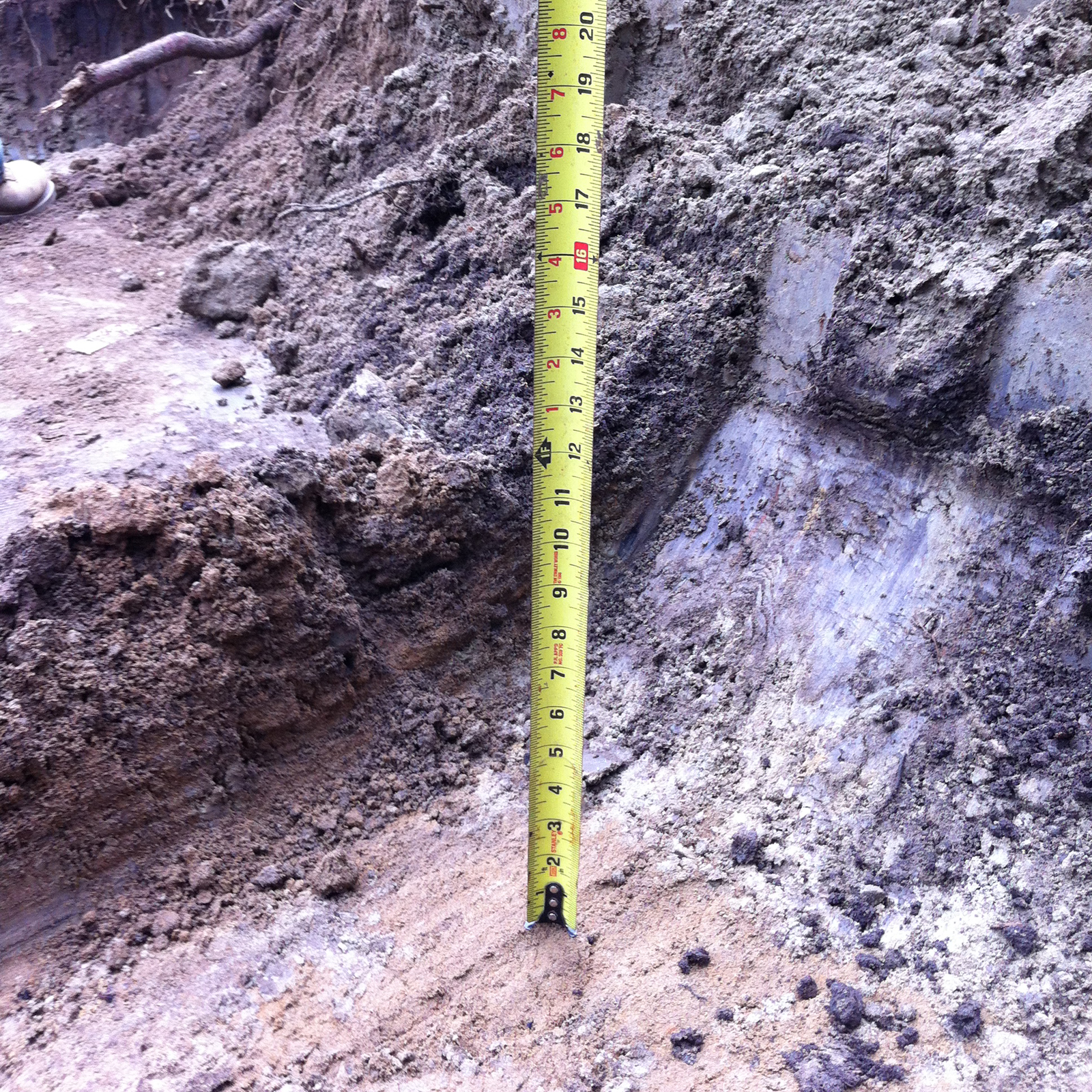 9. Believe it when you see it.
It isn’t until construction that everyone starts to rally around a project. The dreamy ideas during design are in the conceptual phase, realized only in drawings and models. A project with promise on paper can still get the axe, for numerous reasons. The ones that advance to permitting, however, get to go toe to toe with the Building Department. Reviews can take weeks pushing months, and while the documents state what you propose to do, the project remains in an abstract world where the challenge is communication: you must convince the jursidiction that you will, in fact, address each and every specific factor the quirky site demands. You haven’t done it yet. But you will. The back and forth (and back and forth) to satisfy all parties before a permit is issued is just the (sometimes fiery) hoop we all must jump through. But once the switch flips to the construction phase, it’s a whole new game. Welcome to the realm of the tangible, the real, the built. Instead of poring over drawings and paperwork, on-site inspections of what work is done at various stages is what keeps the process moving. The gap between imagining and seeing is never more evident than during the construction phase. 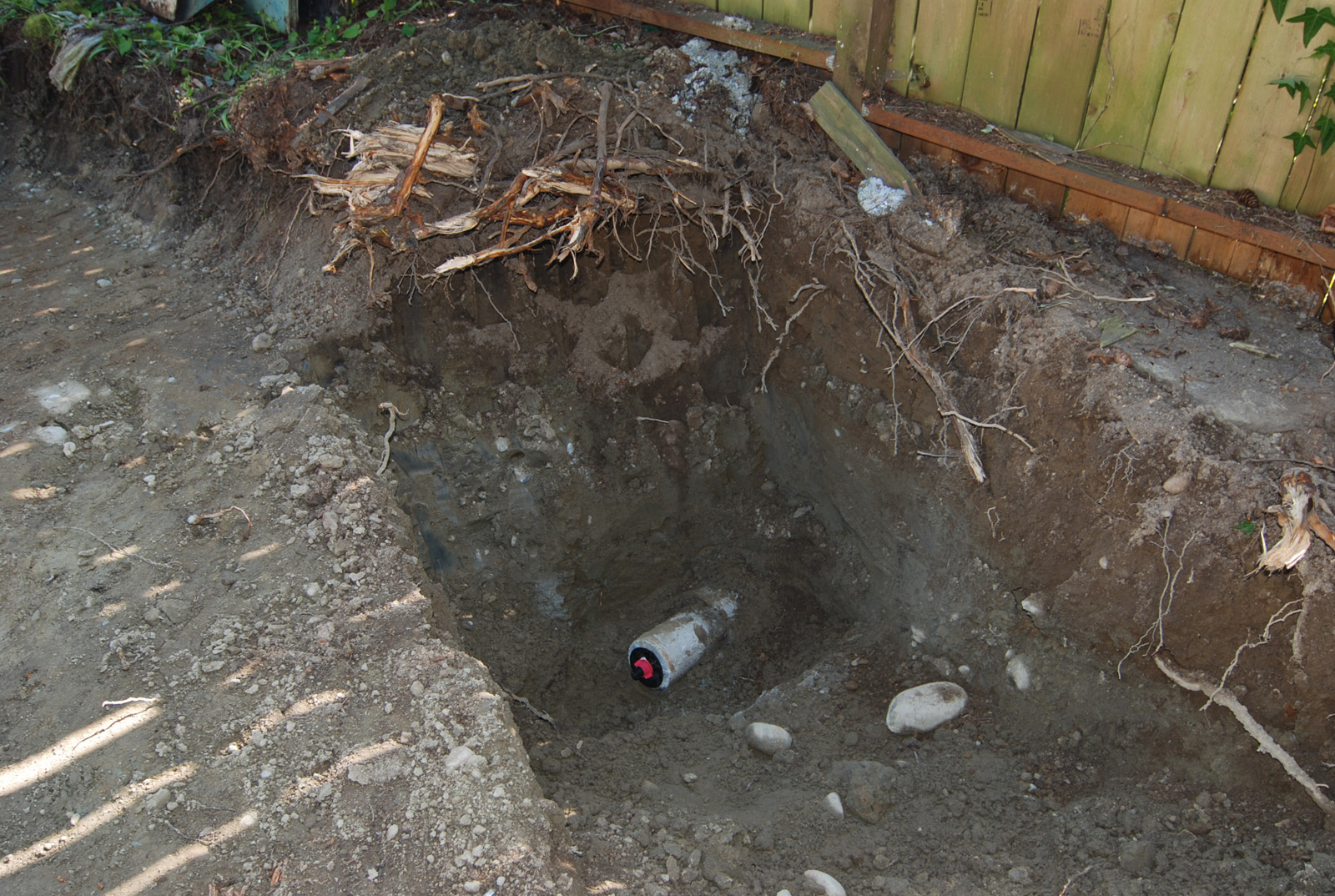 10. Meet your neighbors.
The theater of construction is always a fascinating show, whether you’re directly involved in the work or just there for the spectacle. And if you’re in the neighborhood of a construction site, it’s impossible to change the channel. So it’s a good idea to give your future audience a heads-up on the ensuing activities, especially during demo. A surprise introduction to your neighbors by way of demolition trucks arriving first thing in the morning is unparalleled as far as entrances go. We make certain to alert the adjacent neighbors about construction activities with each of our projects. Even still, on demo day, our little project became the local water cooler, getting the whole neighborhood out to check on the action. 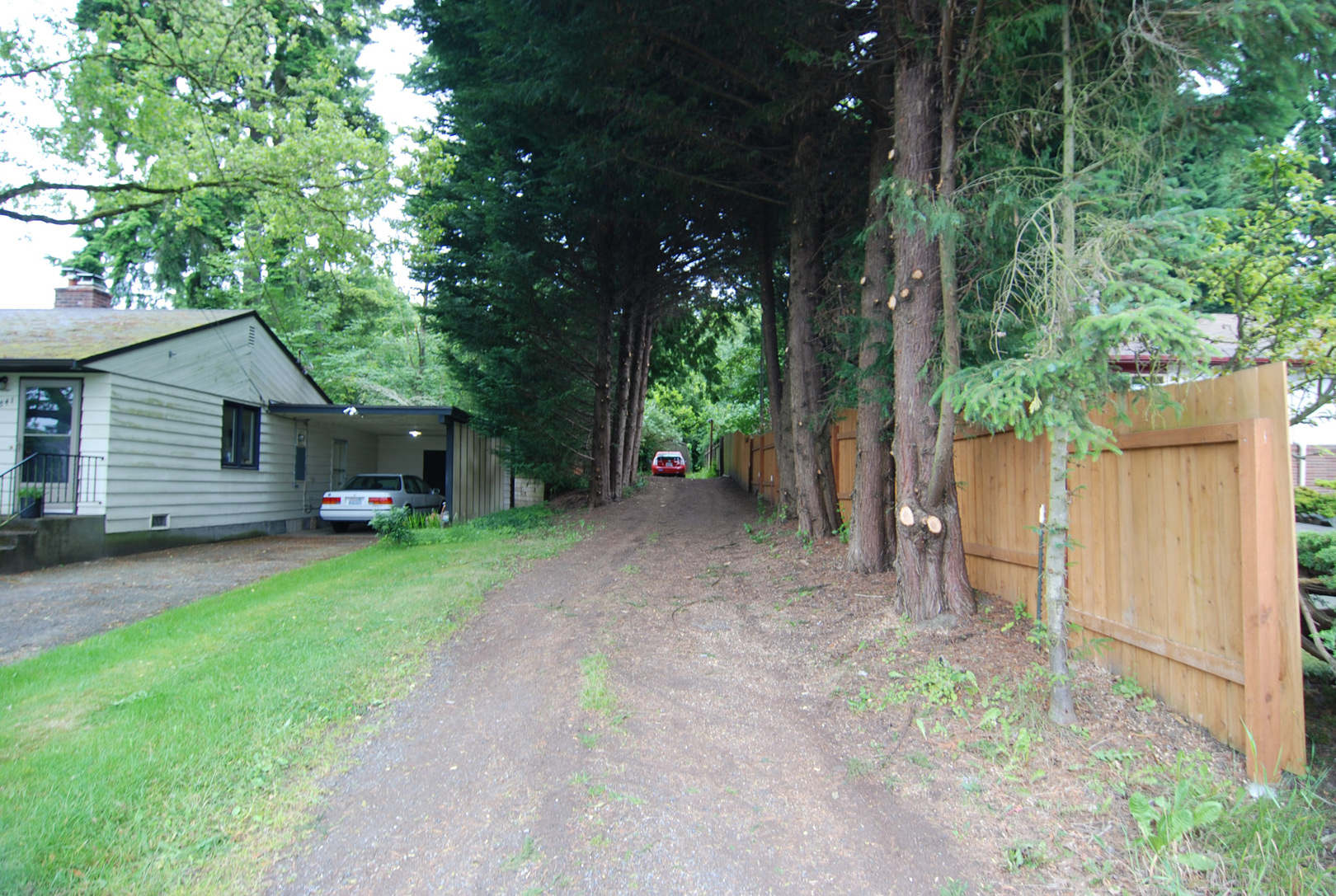