Home 2011 January Architecture that looks like what it’s doing

There was a big paradigm shift that occurred for architecture in the last 50 years. So big, in fact, that it permanently changed the way most architects think. No, it’s not that they started drinking more, they were always doing that. It has to do with how people live and how architects design.

It used to be that an architect composed the façade of a building relatively independent of what was going on inside. There are a wide range of architectures that do a good job of illustrating this and the examples go back as far as the Greeks, the Egyptians and the Medieval Times Dining franchise.  But as much as we’d love to give our thesis dissertation on classical architecture, we’re going use something a bit more relevant for the comparison; we’re going to pick on American Colonial Architecture from the late 1700’s. Y’know, wigs, cannon balls and architectural façades intended to look important and imposing.

The residence below is Gunston Hall in Lorton Virginia, built in 1759 for the Virginian statesman George Mason IV. It’s an excellent example of the Georgian style of colonial architecture which dictates, among other things, a formal box envelope, a uniform window pattern and a regimented symmetry. The symmetry is so rigorous, in fact, that even the chimneys are mirrored on each side. 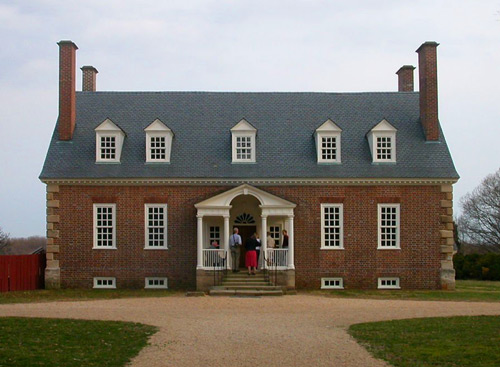 As well composed as traditional architecture may seem from the outside, it doesn’t necessarily have a direct correlation with the inside. All too often, the interiors are compromised to accommodate the exterior look. Marked by ill-proportioned rooms, awkward wall locations and cramped stairways, the interiors of such homes often don’t work very well. What a bummer, you pay an architect the big bucks and get a floor plan that sort-of, kind-of works. But, despite this conflict between outside and inside, the “sidewalk appeal” of traditional architecture is so seductive in our culture, that knock-offs, revivals, and faux styles lasted for hundreds of years beyond their relevance.

The examples above are traditional looking homes built in our current time. The architects of these designs most likely made concessions with the floor plans to accommodate the illusion of a traditional façade. It’s the fashion equivalent of wearing a powdered wig. Fortunately the 1950’s came around and architects stopped sacrificing the function of a home and instead allowed the function to inform the aesthetics of the envelope. With powdered wig and waistcoat averted, architects proceeded to explore ideal relationships between the inside and the outside of architecture. Subsequently it’s been an exciting time in architecture ever since. It’s now an era in which buildings have the possibility of being authentic and transparent; honest to what they’re actually doing. Likewise, architects can interpret human behavior and social needs as they really are; the architects don’t need to fuss around with a pre-determined façade. 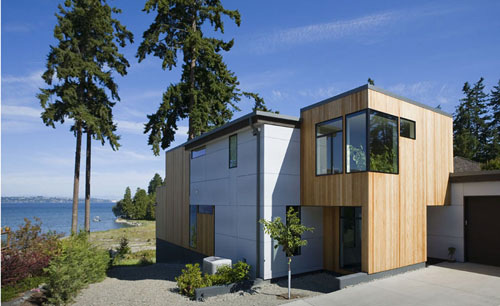 Interpreting the facts (client needs, site constraints, gravity, codes, etc) and translating them into built-form is, perhaps, the most invigorating part of being an architect. Very rarely do we start a project knowing how it’s going to look when it’s completed. How it looks will be a function of its purpose, how it works, and what it’s doing. The process requires that architects be sensible thinkers willing to focus on practical solutions and able to give up the fashion of architecture. The process also rewards clients who see architecture as an adventure.

[Diagram study of the Davidson Residence]

Above and below are a series of diagrams completed during the schematic design phase on several BUILD projects, these diagrams translate the site characteristics, document the client’s needs and begin to interpret the functions into physical forms. Throughout the process of design, the diagrams evolve and become the architecture. Subsequently the architecture looks like what the house is doing. We find this relationship to be beautiful and intentional. No windows where they don’t make sense, no hiding the kitchen because it doesn’t conform to the façade’s symmetry, no embarrassingly small stairways.

[Diagram study of the Medina Residence]

For us, this paradigm shift in architecture is one of the most important changes in the modern era of design. It not only changes the aesthetic and function of architecture, but it allows us rational thinking architects to savor the design process –the process is more significant. It also allows us to put the powdered wigs away.