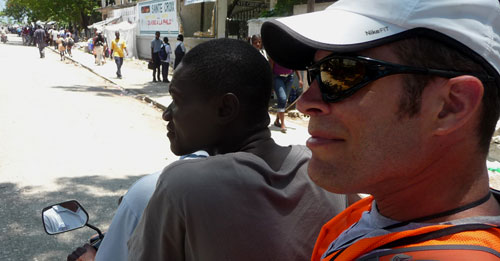 We’ve got a rock-star buddy who, at the drop of a hat, will go climb Mt. Kilimanjaro, navigate the crowded streets of Mumbai or, in this case, head to Haiti to help with the earthquake relief efforts. Team BUILD was fortunate enough to be able to financially contribute to his trip and in return he brought back images and a first-hand account of the work being done in Haiti. As a structural engineer with HSV Engineers here in Seattle, Aaron Pambianco was flown into Léogâne to assess the structural damage to homes and buildings and he was generous enough to get the scoop for the BUILDblog.

At the time I didn’t consider why, I only recall that when the invitation to accompany a local team of engineers and architects to Haiti for two weeks was presented, I couldn’t refuse.  Early in April Scott Douglas (structural engineer @ DCI Engineers) and Rachel Minnery (Architect @ Environmental Works) were forming a team to assess commercial and residential buildings per ATC-20 in Léogâne, Haiti, compile our findings, and present them to the local municipality.

Why Léogâne? On an afternoon last January 13% of this city’s population perished. Between 20,000 to 30,000 of the city’s estimated 180,000 residents were trapped or crushed by falling debris.  By UN accounts 20% of all structures collapsed and 90% of the remaining buildings were substantially weakened.  The city is considered the epicenter of the 2010 Haiti Earthquake and ranked second only to Port-Au-Prince in loss of life and infrastructure.  Compound this devastation with the looming rainy season and there is a clear and immediate need to place people back in safe existing structures, produce new temporary shelters, and identify structures to be razed. 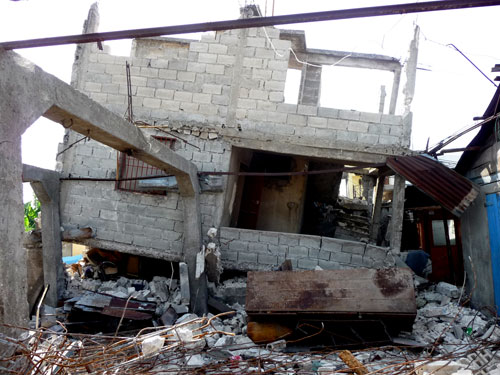 The numbers are staggering.  For a seismic event registering only 7.0 on the Richter scale it produced 250,000 fatalities and ranks 4th of all time deadliest quakes. Pockets of dense population, lack of an enforced building code, and heavy reliance on unreinforced concrete assemblies exacerbated the devastation.  Without mild steel reinforcing, these concrete structures did not possess the necessary strength to protect life safety. 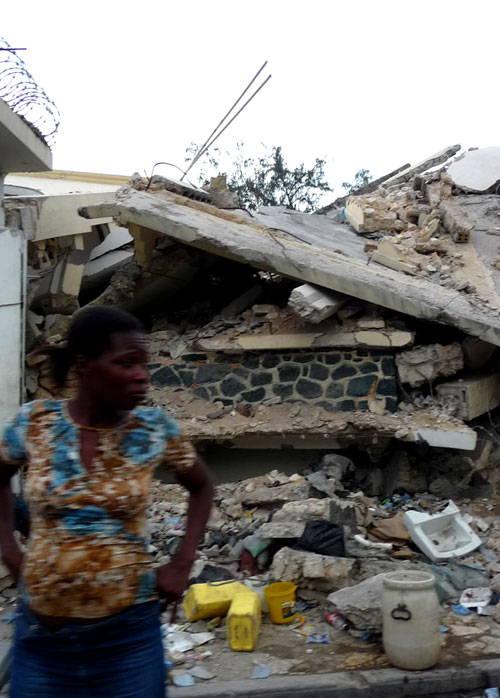 So, 14 days later and with 150lb of checked luggage (maximum amount allowed) I’m on an American Airlines flight from Miami to Port-au-Prince.  My first tip this was not the typical over-booked commuter flight were the teams of relief workers, easily identified by their matching, mostly Christian, themed t-shirts.  The second was the airfield, full of military and UN vehicles; our shiny commercial aircraft looked out of place. 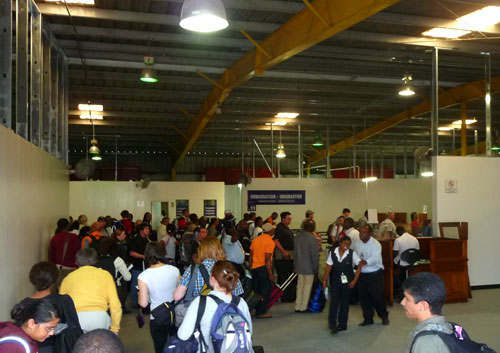 We deboarded directly onto the tarmac, took a quick left, and headed into a detached steel warehouse (above) that served as temporary customs processing.  Only half of the PAP airport is still functional.  The weather made itself known quickly; 95deg and 80% humidity was hard to ignore. 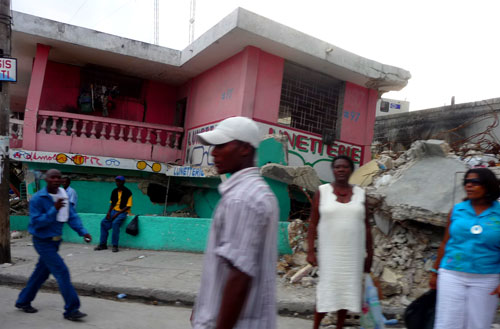 The devastation was immediately apparent.  On our 25km trip to Léogâne we traveled through Port-Au-Prince.  Without exception, each block contained numerous buildings in various stages of collapse.  After four months, the owners of this mixed-use building (above) lacked the resources to fully demolish it, which posed a danger to nearby pedestrians.  This was a common issue.  Since few Haitians owned what we consider homeowner’s insurance policies, any equity backed by a building or land improvements was instantly gone, essentially worthless. 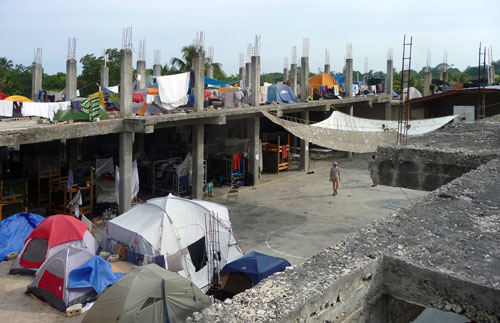 Our host in Léogâne was the charitable non-governmental organization (NGO) Hands On Disaster Relief.  The deal was simple; you provide airfare and your working supplies. HODR provides meals and a secure place to stay.  In addition to our engineering group, there were volunteers moving rubble from collapsed houses to the street, assisting an adjacent hospital, constructing a school, and assembling transitional shelters.  Our base was an abandoned hospital that survived the quake remarkably well (above). 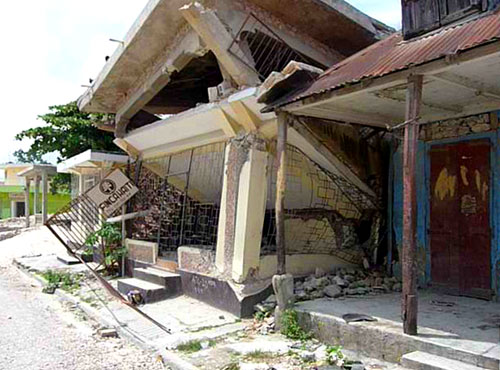 Our group adhered to HODR’s work and meal schedule.  A typical day started at first light with the crows from millions (OK, maybe it was billions) of wild chickens.  My choice for breakfast was cornflakes, powdered milk, and a dollop of peanut butter for protein, then out the door at 7:30am.  We broke off into groups of two, plus a translator, working each of our pre-determined sectors of the city. 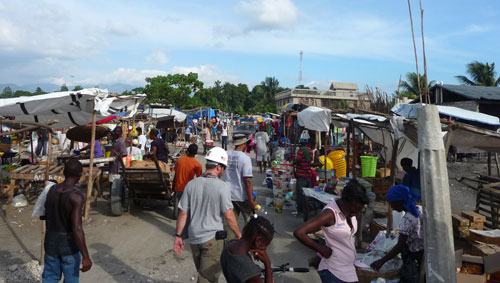 Our day ended around 5pm with dinner of rice and beans plus either fish, chicken, or hotdogs.   Don’t scoff at the hotdogs, they were prepared over a charcoal fire and contained a ton of much needed salt, very tasty.  At 6pm all groups participated in a meeting to review the day’s events.

In addition to ATC-20 building assessment, we consulted owners on the degree of repair necessary, whether or not they could sleep in the building, and if there were any falling hazards.  To facilitate the repair process we printed and distributed various repair guides, translated in Creole.

The UN’s directive was to clear rubble from public streets, but they would not trespass on private property.  That’s where HODR came in.  They moved rubble through the maze of houses to the street and provided the all important first step in rebuilding.

The moto-taxi was the prevalent form of transportation through the rubble filled streets and is the best answer to spanning the frequent gasoline shortages. This trip (above) takes us through the downtown square and depicts one of the hardest hit areas.  After the first right we see almost the entire block is down.  A church is being rebuilt with wood framing.  On week two I discovered a $1US cross-town ride in a soaking t-shirt was a great way to fight the mid-day heat. 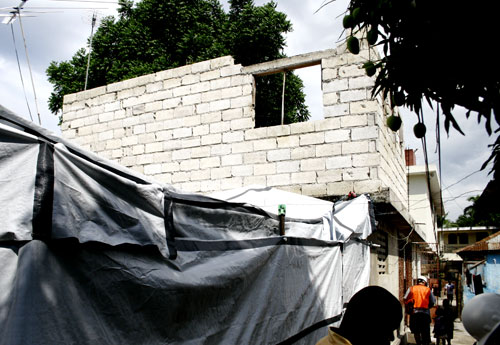 A frequent question we posed was “Dormir ici?” or “Dormir la?”; do you sleep here?  The prevailing fear of collapse moved families outside of their home, but unfortunately they often chose temporary shelter under the greater threat of falling hazards.  Here an unbraced CMU wall is perched over this family’s tent.  A small aftershock in the right direction could have deadly results. 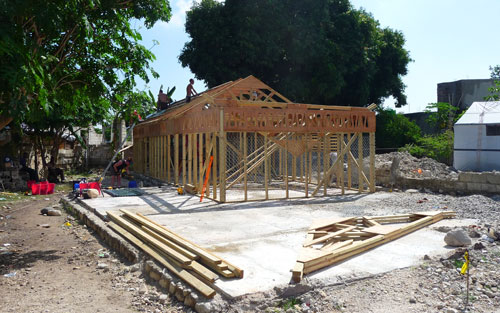 Our group helped design a (3) room elementary school and provided foundation anchor bolts and hurricane ties (the majority of my 150lb of checked luggage).  Wood-framing was chosen because it is a light assembly and will allow this structure to withstand the next seismic event.  Special attention was given to wind uplift forces due to the frequency of tropical storms. 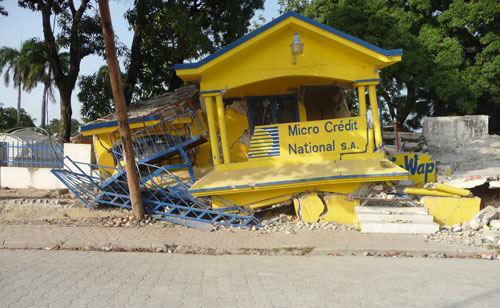 Another setback for the city, the Micro Credit bank is no longer functioning. 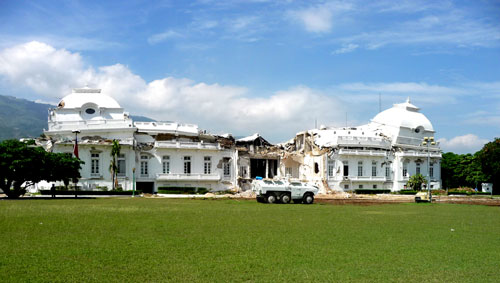 The presidential palace in Port-Au-Prince wasn’t spared and is scheduled to be razed.  Days after the event a tent city sprung up on this front lawn, which has now been moved across the street.  The grounds are under the UN’s 24hr guard. 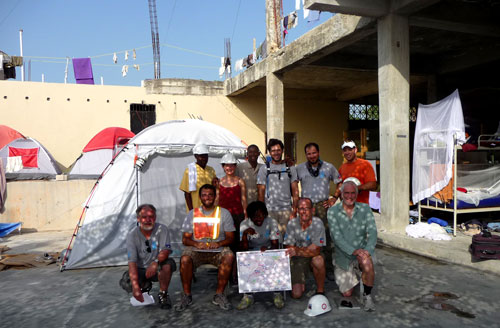 During the two week stay our group evaluated approximately 700 private residences and commercial structures, and hopefully helped some families return to safe shelter.  Preventing a future seismic tragedy will require Haiti to adopt some form of a building standard and dissemination of that information to the construction community, easier said than done.  For a city of 150,000, Leogane does not have a municipal water system or sewer system, functioning electrical grid, or a noticeable police force.  Staffing a building department with inspectors is probably low on the list of their needs.