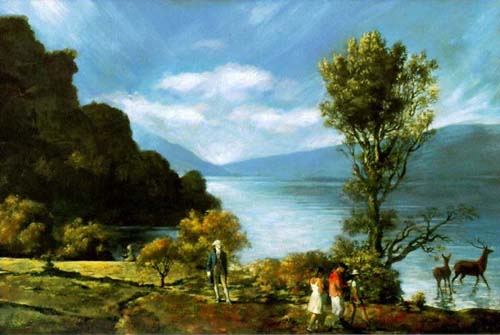 Chances are pretty good that the painting above appeals to you.  Like it or not, the majority of you “want” the painting – statistically speaking.

In 1994 Vitaly Komar and Alex Melamid, two Russian painters, hired professional polling companies around the world to conduct surveys in several countries directed at individuals and their preferences in a painting.  Country by country, people were polled about what they want and don’t want in a painting.  In 1997 the surveys were compiled and, based on the statistics of the survey results, the artists created a painting of the “most wanted” attributes and a painting of the “least wanted” attributes.

We first heard about the People’s Choice experiment on This American Life and became immediately fascinated with the process.  The finished results of the experiment are no less entertaining; the “most wanted” painting (above) is both hilarious and disturbing.  It’s probably no surprise that the painting is of a landscape; as you can see the painting also includes a mountain, a lake, deer, and a family.  Oh, and George Washington.

The least wanted painting in America can be found here, along with the most wanted and least wanted from the other countries polled.  But Melamid and Komar didn’t stop there.  The two went on to perform a similar study with music and produced “The Most Wanted Song” as well as “The Most Unwanted Song” with composer David Soldier.  The “Most Unwanted Song” involves an operatic soprano who raps over cowboy music and features bagpipes and tuba while children sing about holidays and advertise for Wal-Mart.  Hillarious.

We bring all this up because the nature of the study is more applicable to the design industry than ever before.  In an age of opinion polls and consumer products as a derivative of market research, it is crucail for the design culture to come to terms with this underlying psychology.  It begs the question of whether a product should be designed by experts or by surveys of society.

In the architecture industry we’re constantly gathering what people want with the goal of creating an end product that covers the list of requirements. Naturally the design also has to be poetic, structurally sound, code compliant, etc.  But if it doesn’t fullfill the requirements then it’s not a solution.  And typically one product is produced that must appeal to many people.  It has to be their “most wanted” house.  Subsequently the People’s Choice experiment was all the more intriguing to us.  We can’t help but imagine what sort of results Komar & Melamid’s technique would produce with architecture.  We’re willing to bet a Benjamin that the “most wanted” house in America includes a turret.