We’ve got a hot new project to unveil that we’ve been keeping under wraps since its very recent inception.  It was conceived, designed, fabricated and built in 4 weeks and completed early this morning.  Stay tuned for a blog post on the tight timeline, process and exceptional teamwork on this one. Constructed in the Armory Building of Manhattan’s Upper East Side, the project is one of the main fixtures for the Microsoft Open House and launch of Windows Mobile 6.5. The 12-foot tall by 32-foot long tube enclosure sits ten feet in the air and rests between (4) 24-foot tall logs. 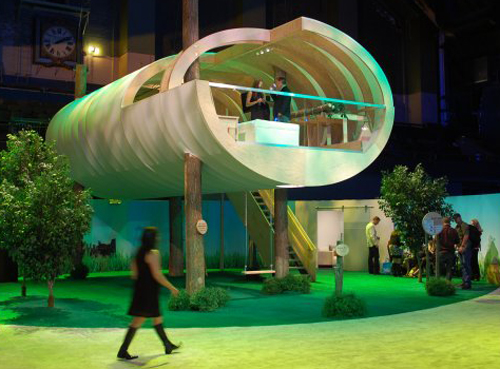 Architecturally, we aimed for a built-form that is modern and sleek, at the same time raw and tangible.  The plywood ribs create a nice balance with their precise radius cuts and natural warmth.  The rough tree bark lends texture, feel and aroma.  The airy fabric wrap is visually light and allows the structure to glow in the space.  It’s intended to be fun and low-tech, modernism with a soul. 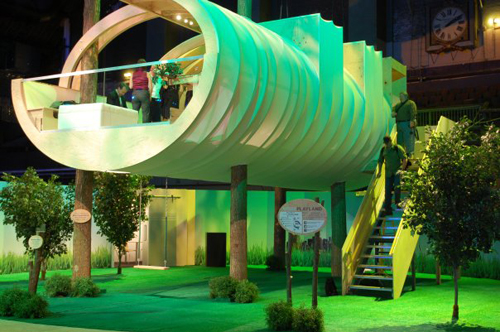 BUILD’s  AutoCAD drawings were emailed to the CBS shop (yup, THE CBS in downtown Manhattan) and then fed to CNC machines for precise cutting of the 29 plywood ribs – thanks to David for the speedy delivery. 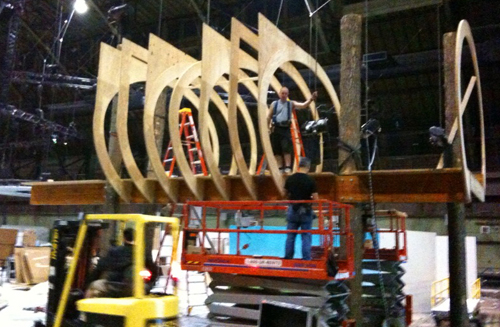 The 4 trees came from upstate New York where they were trucked down Lexington Ave and brought to the Armory Building.  It was quite a site; 24-foot x 14-inch diameter logs being offloaded on the Upper East Side then carved up with chainsaws. 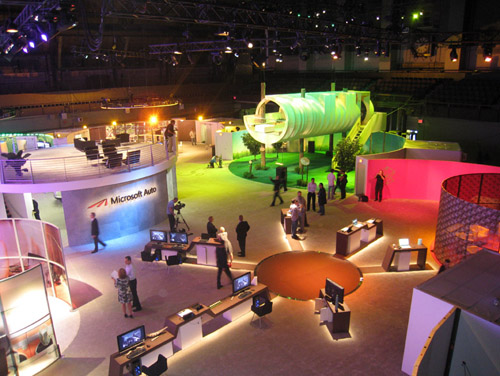 Built by the indispensible Wes Weaver, super-builder/motivator in conjunction with NYC teamsters.  Teaming with Wes on the construction was Kevin Eckert who provided construction management sharp-shooting in addition to elbow grease on the project. Designed by Andrew van Leeuwen, BUILD LLC worked in conjunction with the creative direction of powerhouse Workbench Creative -thanks to Greg, Matt and John Wallis.  The concept is the brainchild of Seattle based masterminds Wexley School for Girls. The tricky structural engineering was provided by Swenson Say Faget Structural Engineers -thanks to Paul. 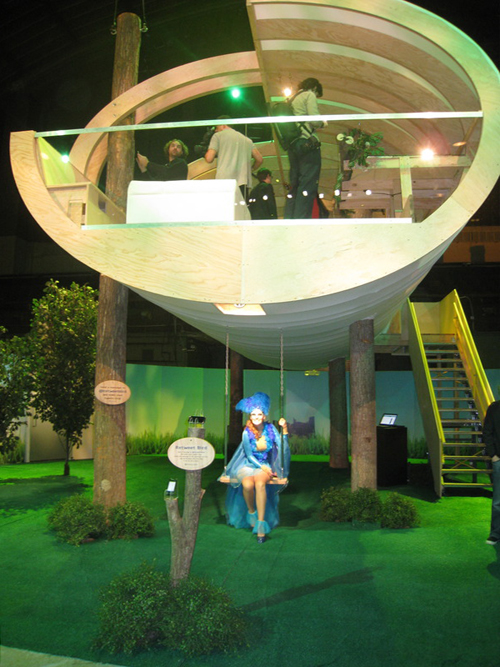 Cheers from your (exhausted) friends at BUILD…