Home 2009 August Back to school guide for architects

Back to school guide for architects 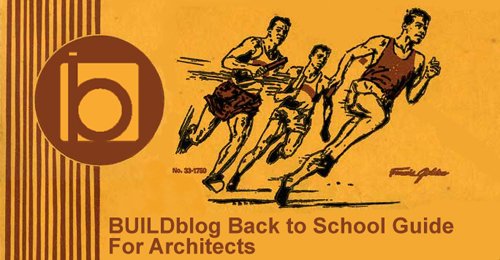 It’s that time of year again; rural Universities have started classes and urban Universities will start soon.  Architecture school is an extremely demanding major requiring different skills and a broader range of tactics to successfully navigate.  Here at the BUILDblog we’ve put our combined 18 years of university architecture school experience together and we’ve come up with a list of 10 critical items we think you’ll need to tackle academics and shoot out of Architecture school without all the baggage.

1. There is no substitution for hard work.
If you’re not a hard worker the remaining nine bullet points probably won’t make much difference to you.  The study of architecture requires that you be productive and diligent.  You’ll miss good parties; friends will look at you incredulously as you head off to the studio on a Friday night.  Stick to it and be industrious.

2. That you have to pull “all-nighters” to get your projects done is a fallacy.
It’s simply not true.  You’ll be told differently from students higher up the ranks.  When they tell you that “there’s just no way around all-nighters” they will be holding a cigarette in one hand, a triple grande coffee in the other and they will have a look on their face so morbid that it will seem more appealing to simply change majors.  Don’t believe them, they’re delusional.  Work hard, work efficiently, work with self discipline. You don’t have to pull all-nighters to produce exceptional work in architecture school.  The students who have supposedly “been up for 3 nights” always seem to be sleeping on the couch in the library during the day.

3. Nobody likes hearing a presentation from a zombie.
Practicing how you present yourself and honing your communication skills are just as important as the architecture you are discussing.  Get a bit of sleep the night before presentations and crits (refer to #2).

4. Crits aren’t always about architecture.
There’s also less at stake during crits than you might think.  You’re going to have jurors that love your projects, jurors that hate your projects and everything in between.  Often, jurors show up with their own agendas – the thesis of that book they just published, their latest project they feel the need to defend, an axe to grind with another juror, who knows.  What you should know is that these things are beyond your control.  Present yourself well, listen to and respect the jury and at the end of the day don’t worry too much about what they think or don’t think.  We’ve seen some exceptional presentations and we never saw anyone being offered a job on the spot.  Conversely, we’ve seen some presentations go disastrously wrong, and there were never any real-life consequences.  Crits have less of an emphasis on the design;  it’s an opportunity to work the kinks out of your presentation skills before you’re actually talking to a client – at which point there will be consequences for a poor performance.

5. You are the CEO of you.
In academia we would occasionally come across the professor who tried to steer our projects in the direction of their own personal agenda.  Sometimes that’s for the best and sometimes it’s not.  Obviously the appropriate path depends on the professor and the context – but just because a professor has a vision for your project doesn’t mean that you need to follow suit.  Use your judgment – those same skills of persuasion and tact will come in very handy later in your career.

6. You’re paying them, not the other way around.
A good professor should receive your full respect – after all, they’ve forgotten more about architecture than you’ve ever learned.  At the same time you are paying tuition to be taught and professors should be held accountable for your education.  If you’re not getting what you want out of a class or studio it is up to you to voice that concern and your professor’s to address it.

7. Get more mileage out of your hard work.
We were often prohibited from using the same work in different classes.  For instance, the same photographs of an architecture project could not be used in both an architectural studio and a photography class.  Such practice was considered double-dipping and deemed unacceptable.  We never agreed with this – it’s not the way the world works.  In our practice we don’t take separate photos for Dwell, Met Home, Sunset and Architectural Record.  We take the photos once and send them to everybody, as well as use them on the website and the blog – otherwise we’d be up all night.  Obviously there are examples of abuse and it’s important to be judicious about the issue, but we’re fans of getting the most mileage out of hard work.  Be clever.

8. Your portfolio is not the Holy Grail.
Portfolios are important, no doubt.  They are not, however, the most precious object on the earth’s surface.  Craft it, refine it, use it, leverage it and realize that someday it will be collecting dust under a pile of construction documents in your office.  It is a tool useful at a certain period in your life, it is a stepping stone.  It is not more important than how you think, who you meet and how you operate in the world.  Most of all don’t expect other people (like non-architects) to give a crap about your portfolio – to them it’s 20 pages of pretty pictures with a leather cover.

9. Diversify
Take some classes in real-estate, business or engineering.  You will need these perspectives more than you can imagine as an architect.

10. Don’t bore your non-architect friends with archi-speak.
If you’re not careful, by the time graduation comes around the architects will have degenerated into a cult, locked away in the studio with their own language that nobody can decipher.  Get out of the studio from time to time and leave the archi-speak at the door.  The lawyers, MBAs and pre-med students you talk to over beers at the bar will be your clients someday – don’t scare them off.

Posted in Raising the Bar