The Black Box of Architecture

Starting a blog about down-to-earth, modern design, it seems only appropriate to begin with Reyner Banham – an architecture critic who’s no-nonsense approach cut right through the b.s. of the design profession and got down to business. From what we understand, he was a guy that could get away with an unruly beard and uncoordinated clothing for one simple reason – he was smarter than most of us. 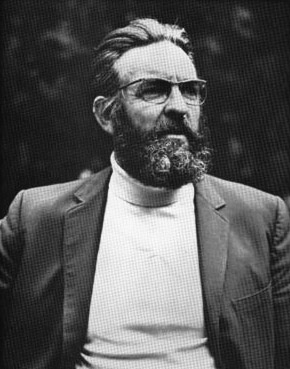 In his 1990 essay “A Black Box, The Secret Profession of Architecture” Banham eloquently attacks the academic snobbery so common in design culture. C’mon you know the symptoms: using phrases that nobody understands like “blur the boundary between…”, a wardrobe covering the spectrum from black to 40% gray, indecipherable manifestos, owning the high-end designer chair at the exclusion of any other furniture. Hey, we’re no exception (and it’s a Rietveld chair for your information). You can throw some darts at the BUILD manifesto here.

Banham proposes to treat the architectural mode of thinking and communicating as a “black box” and claims that [architecture] “no longer seen as the mother of the arts, or the dominant mode of rational design, appears as the exercise of an arcane and privileged aesthetic code.”

In direct conflict with this mode of operating, he points out that there is a tendency in the culture of architecture to make irrelevant comparisons. “The modern movement in spite of its inclusive approach undermines itself by using comparisons with certifiably non-architectural objects. They left the architectural body confused rather than reformed.”

It’s the comparisons, analogies and metaphors to blame, according to Banham. A structure derived from the form of grain elevators, a high-rise generated in the spirit of an airplane wing, the building as poem. You know the routine – we’ve all waded through these waters.

Mr. Smarty-pants has a good point. For as sophisticated and elite as the architectural community seems on the surface there appears to be an abundance of superbly mediocre buildings here in the northwest. I think we can all agree on an uninspired boatload of boring buildings surrounding each of us right now.

I don’t know about you, but here at BUILD guarding a black box doesn’t really seem like a job we want for the rest of our careers. The escape, Banham proclaims, is a re-divorce of what never should have been joined together. An end to the comparisons. Such action asserts architecture as architecture, and proclaims that a building is a building. Banham reasons that aspects of significance will once again rise to importance in architecture: function, environmental performance, beauty, deftness of space, truth to materials, structural efficiency…

By exposing the inner workings of the black box and maybe even abandoning it altogether the profession could very well become more accountable and technically capable. Architects would subsequently evolve back into a profession of experts about buildings.

Banham wraps it up thusly: “[Architecture] could permit itself to be opened up to the understandings of the profane and the vulgar, at the risk of destroying itself as an art in the process. Or it could close ranks and continue as a conspiracy of secrecy, immune from scrutiny, but perpetually open to the suspicion, among the general public, that there may be nothing at all inside the black box except a mystery for its own sake.”

Here are a few fantastic pieces of architecture in the northwest that seem to have been designed outside the black box:

Canlis by Roland Terry and updates by James Cutler

Pretty much everything that Ed Weinstein has had a hand in, such as the quietly beautiful Senior Center in Belltown at 2nd and Blanchard